Tuesday morning the wind was 15-20 knots from the east as predicted. But after our tow guy came down the river to meet us, he said it wouldn't be a problem. So we cast off the dock lines at Sunset Bay. First we had to go through the bridge we were docked by. We called the bridge on the radio and heard “Attention Attention the Roosevelt Bridge is preparing to open.” This time for us and for the last time after hearing it couple times an hour for the last 4 months. 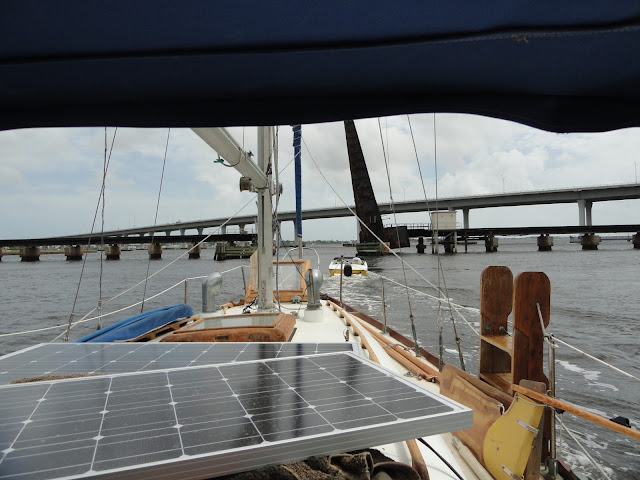 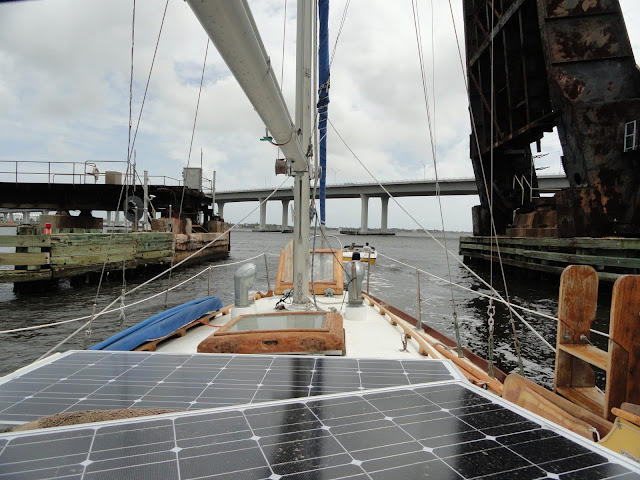 Water splashed up on our bow, and sprayed us a few times, but we easily plowed dead into the wind with Mark's 225hp engine. Though we were getting towed, we still need to steer so we got to try out the new tiller. The current was pushing us hard to port most of the way. I am so glad we did the conversion. The wheel means being stuck for hours sitting in the same position, with one view. You can do yoga around the tiller. Or steer with your feet. 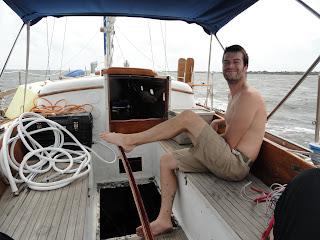 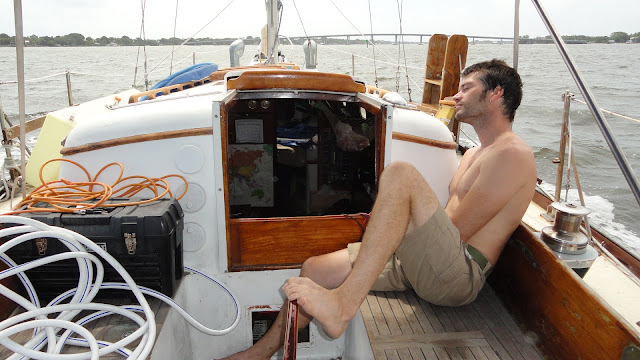 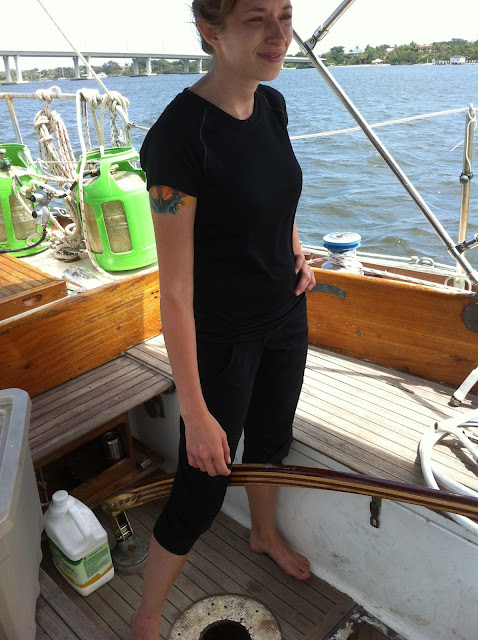 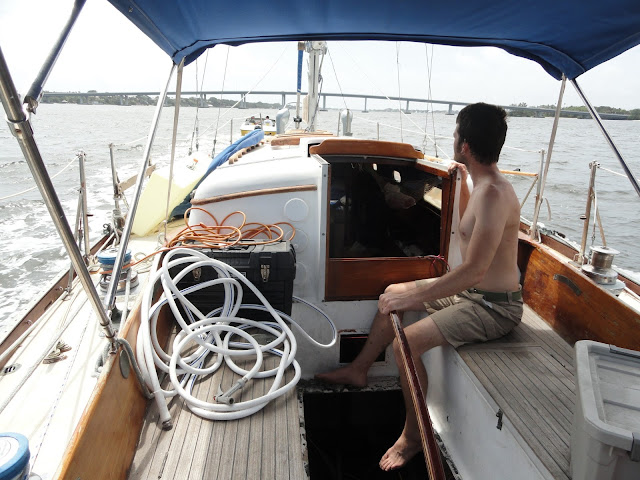 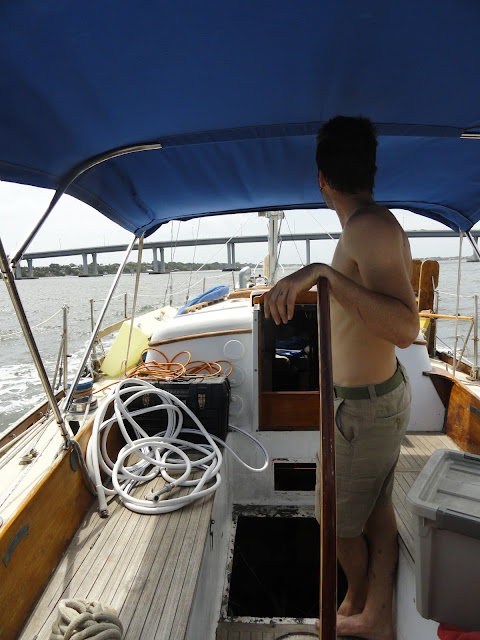 The tiller was a lot harder to turn than it should have been. Something we would need to investigate when on the hard.

Here we are pulling into Manatee pocket. It starts to get nerve racking when you enter into channels with boats and buildings lining either side. There are no pictures between here and the docked boat because I can't really take pics and dock the boat at the same time. The camera was forgotten as soon as that came into view. 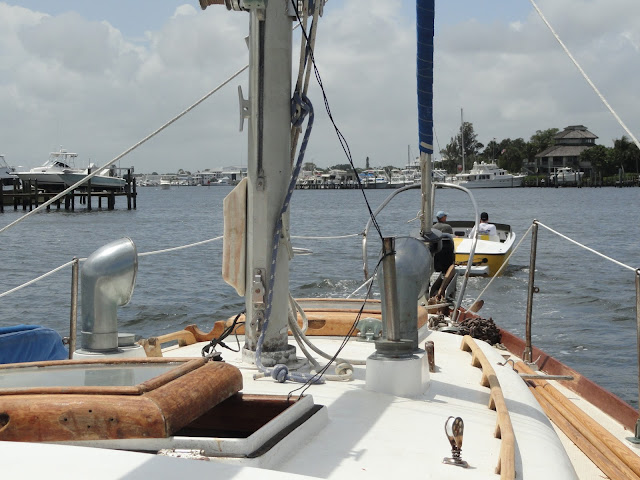 We docked at Finn's, a restaurant with waterside outdoor seating. It's dock is the waiting line for the haul out lift around the corner.

As we approached the dock there was that little twinge of panic. No matter how simple it seems I can't change the fact or help thinking that I have never done this before, and have never seen it done before. I could be lacking vital information intuition isn't giving me. I had steered with the tiller under tow but not adrift. The boat is every thing in the world we have, and it's a weapon of destruction adrift in a lane of very expensive things. And I had to dock next to people casually lunching. All sitting there watching the entertainment the waterside provides.

I silenced the world, and drew from my only real point of reference for this kind of activity, and played it like a video game. Focus, grab the joy stick and pass this level with no penalty points. If you don't, you have to start all over from the beginning. Game Over.

Mark pulled us up to the inlet, then we docked ourselves adrift. The current was strong with 15 knot wind directly on our stern. We were adrift a little ways before reaching the dock. I steered the boat while AJ stood ready to jump to the dock with the dock lines to tie off. The current was moving me quickly. I docked stern first to keep us from continuing on with the current as best I could. I eased it to the dock and AJ stepped off the back, tied off and ran forward while I steered the bow to the dock, AJ hopped on grabbed the bow line and tied it off.

It was shockingly easy, unlike last time when I docked using the wheel at Sunset on D Dock. The wheel was a nightmare, it did not compute. It steered like a car - Turn the wheel right, the boat goes right. – Only it's not wheels on pavement, so it makes no sense to steer that way. It's a fin in liquid. Turn the rudder left to manipulate the water to turn the boat right. So for me, the wheel was steering backwards because you turned it the opposite direction you wanted the tiller to go. Also, the wheel has to be turned around fully twice to go full left or right, and it has no self centering effect and little feedback. God knows where the tiller really is pointing between those spins. If you turn the wheel almost once - the tiller should be pointing about 1/3 the from distance off the center to starboard... It's preposterous. It also disconnects you from feeling the resistance and direction of the current. You can't just listen to the water and the boat and let them tell you what to do. You have to just eventually remember that spinning it this much turns it so far.. when going so fast...Understanding how to compensate for speed or lack of is also intuitive with the tiller, because you can feel it. Just like you can feel the forces in a car and know the speed and direction. How can you steer a boat if you can't feel all of that? The tiller directly turns the rudder, when you've got hold of a it you just know what to do. Grab a wheel and hope to god your estimations are correct and margin or error not too great. 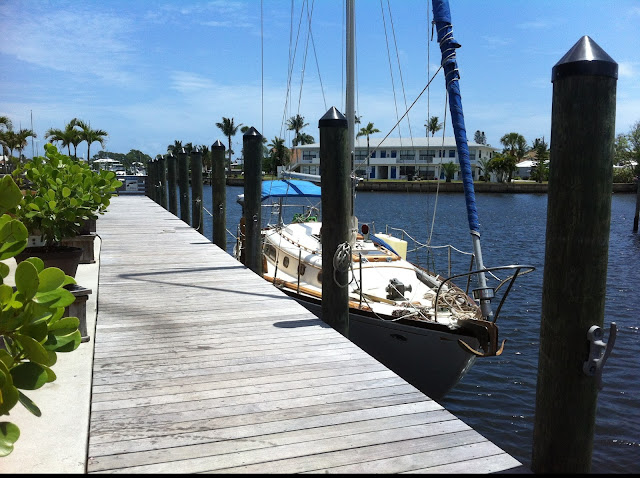 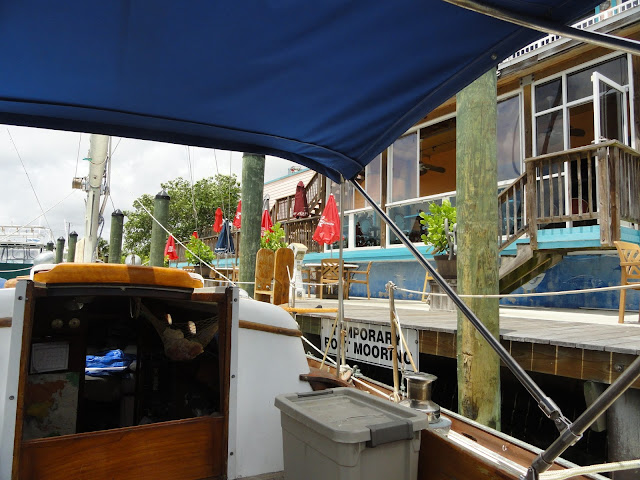 Later I was informed that docking with the current and 15 knot wind on your ass is a high risk maneuver even under power and not something you are generally not supposed to attempt. Glad I didn't know that at the time, because it might not have gone as well. Mark towed us in as far as he could, but that still left us having to get to the dock. So I thought "awesome, the current is moving in the direction I need to go. Otherwise we'd be sculling it." But the danger is not being able to stop. The proper way to dock is nose into the wind. Normally we would have been spun around and towed into the wind right along side the dock until we were stopped. But the inlet was too narrow and too short to turn us around. There was no other choice. And I don't know how we would have got to the dock so easily if the current wasn't taking us there, as opposed to trying to take us elsewhere.

Our haul out appointment was for 3:30, but they were delayed with the boat in front of us. And the tide wasn't high enough for us then anyway. You'd think they'd schedule haul outs based on draft and tides. The next time the tide would be high enough would be after 5pm, and well, they close at 5. Another thing that struck me as odd. If your business depends on the tides shouldn't the operating hours? Ah well, it's a do it yourself yard with salty old machine operators and a bunch of old men who sit outside the shop and stare at the boats. They told us they would try to get us in the next morning, but that there was someone in front of us again - going in at high tide with a low draft.

The next day again, they were not able to finish up their other job before the tide went out and at low tide we were touching bottom. We were lucky to not have hit bottom while docking. So our appointment was pushed back another day. We spent that day riding around the area checking it out. The authentic Mexican and Guatemalan restaurants with $1.50 tacos are all w/in biking distance. All 4 of them. There is a Mexican grocery too. There's a fiberglass store, and the industrial district is close by. Goodbye Highway 1. May we never meet again. Hello Taco stands. I love this place.

Thursday morning they were ready for us. We were going to need to go into the lift stern first so we'd be able to be dropped in the yard with the stern facing out. This meant doing a 160, back end swinging out from the dock all the way around so it could be steered backwards into the lift. Here is the boat on the dock, the lift is the huge blue scaffolding around the corner. You can see how we have to turn around to enter backwards. 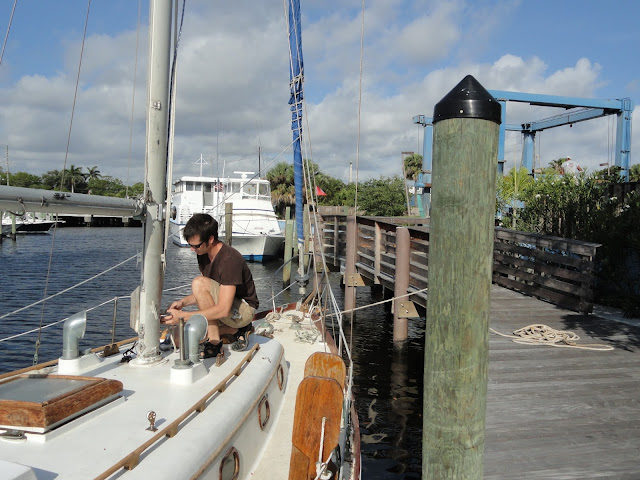 This time I steered again while AJ and the yard guys took the dock lines. It was cast off at the stern to drift, while kept tied at the bow. I steered it around and put the stern back on the dock on the other side. Then they pulled it with ropes bow and stern while I steered, backwards and around the corner into the lift. 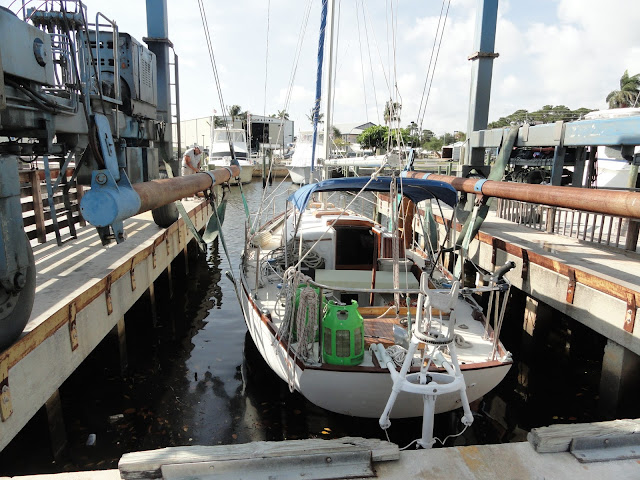 I hoped off the the stern and up it went. 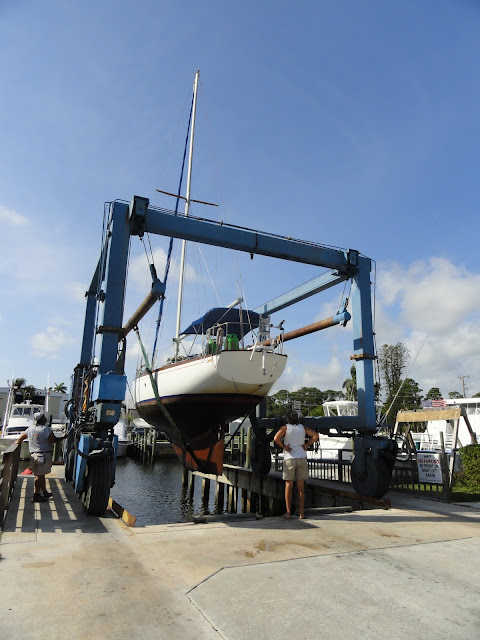 Then down the street 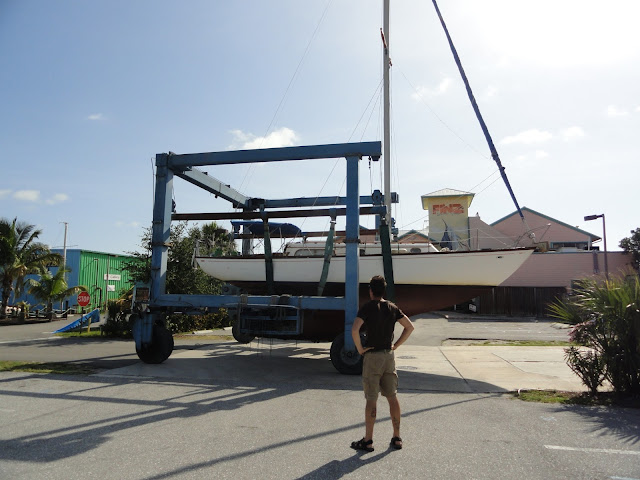 to get the bottom power washed 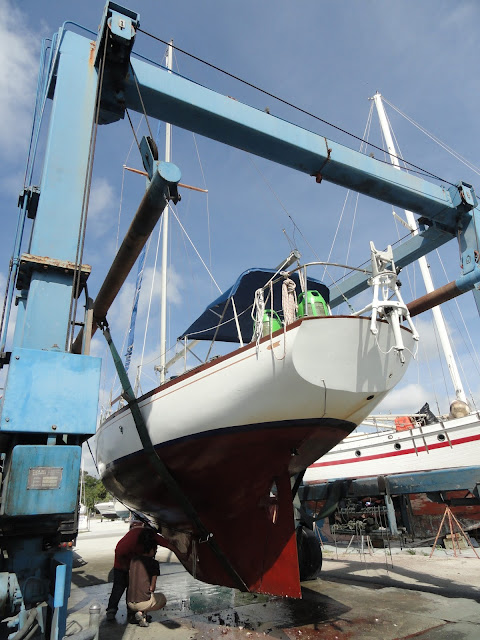 Here's why we could not tell how fast we were going. 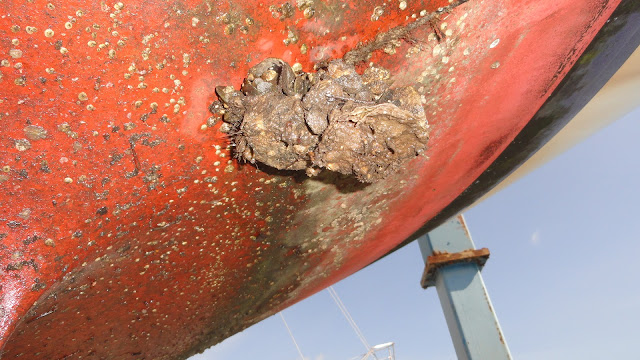 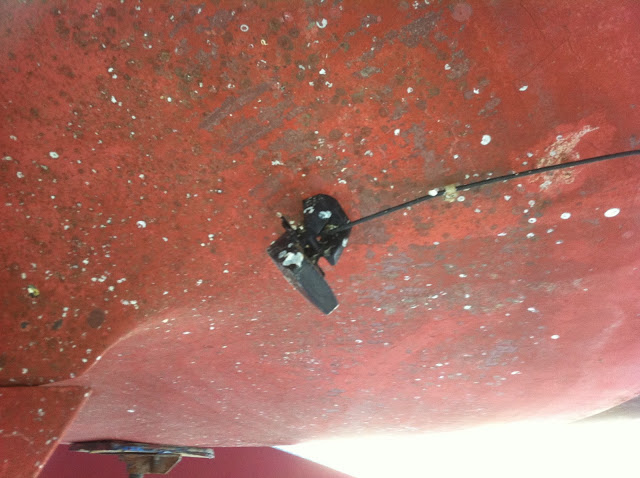 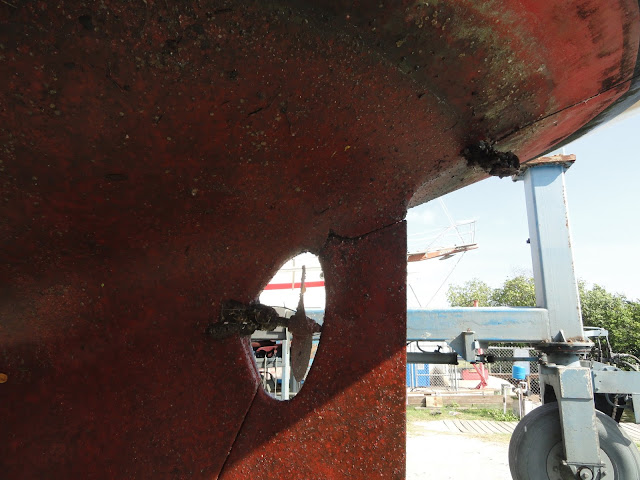 Clean – ish. We are going to have to strip the paint to bare fiberglass and do a new bottom job. It's chipped through to the fiberglass in many spots. Here it flakes off easily. You can see the water coming out of it. 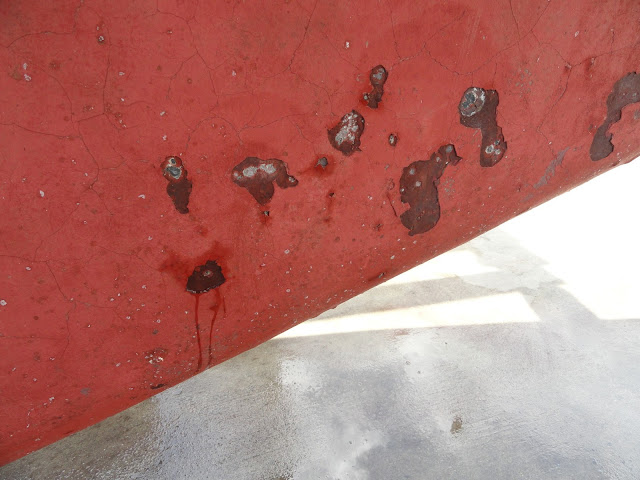 On to the yard 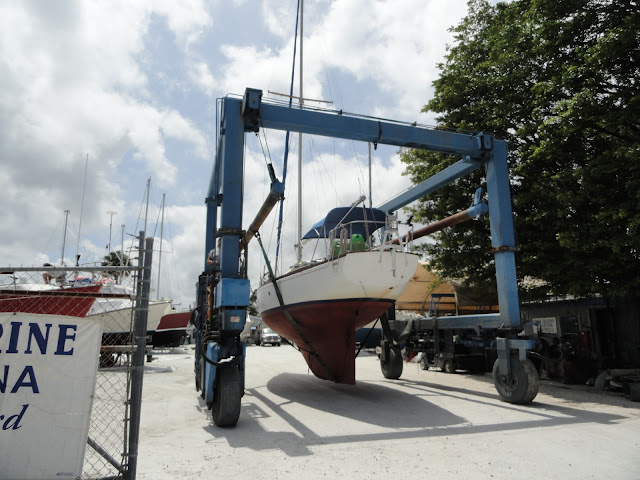 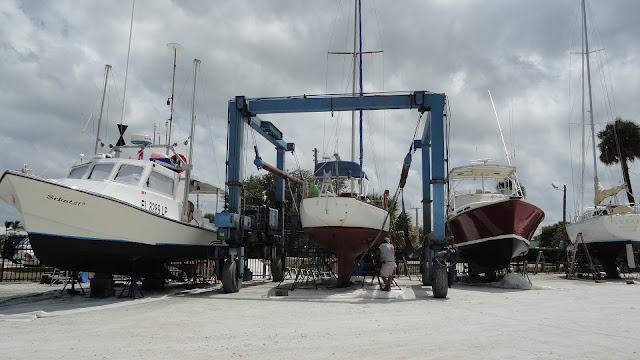 Blocked and Braced with a Monster keel! 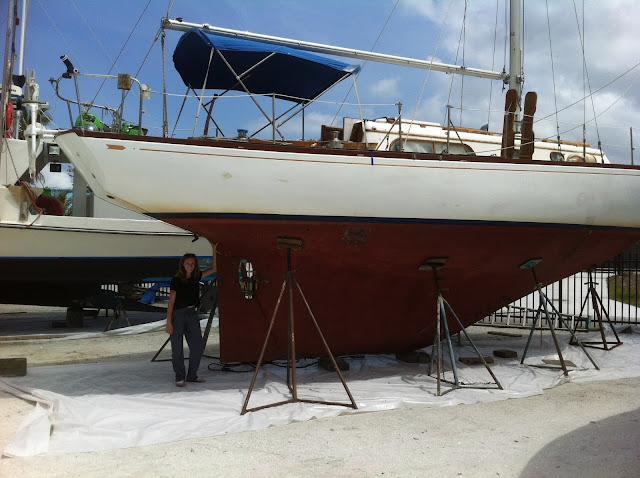