The last sections of toerail have been waiting on the genoa tracks.  Our old tracks were badly corroded 11+ foot long strips of bronze that had a wooden riser underneath to turn them into "T" tracks.  Most of the countersunk holes had corroded away, leaving us less-than-enthused about their future service life and ability to not part ways with the bolt heads.  So back on the phone with Garhauer Marine.  For those that may not know, Garhauer, out of Southern California, delivers super cool-looking, super heavy-duty sailboat hardware with superb customer service at crazy-low prices.  Barely more than the cost of the metal in some instances.  We sourced all of our new stanchions and gates from them because they were cheaper than just buying stainless steel tube.  Their extruded genoa tracks are of excellent quality as well.  Hard gray anodizing done after machining.  We ended up ordering two 8' sections.

We started by laying the T-track on top of the toerail, then drilled every hole and placed bolts in every other hole in order to hold the track with the rail while we bent them to the hull curve.  Using the open holes as the guide, we drilled through the deck and sent every other bolt through the deck, then went back, pulled the odd bolts, drilled the deck and pounded them home as well.   Once we were satisfied with the fit we pulled it all up, cleaned it, and sent the bolts through all over again, this time leaving a 1" gap between the deck and rail for a fat caulk bead. 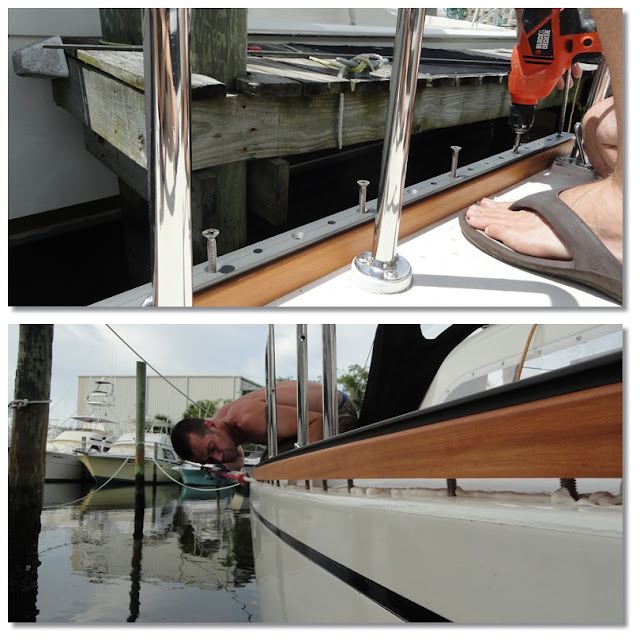 We have been wanting to find a good solution for a mid-cleat for quite for a while.  Back in the old operational boat days, we were breaking toes on a poor excuse for a "mid" cleat by the side of the cockpit, about 7 feet away from the aft cleat.  It is a busy place for ropes when sailing and feet when climbing aboard, and this big, sharp cleat was ineffectively placed right in the middle of it, and far from where it should be.  So we cleared off that long ago, but have been wanting to include a real set of mid-cleats in the rebuild.  When we were starting to measure for T-track and toerail placement, I thought about just leaving a gap in the toerails and placing the cleat in the gap: out of the way, better deck drainage, and no need to put it on a riser to clear the toerails.  We placed it all together, both stood back and appreciated the visual aesthetic, and went for it.  I bedded it with butyl rubber for an infinitely re-sealable and flexible seal.  Butyl will also allow me to remove it easily without paint damage if we want to place it on a small riser afterall.
The last three feet of exposed boat edge took a small section of rail.  In spite of the inconsistency of drain spacing, it works out perfectly. The gap at the aft end is right next to the limber hole under the turning block and the forward end is right at the lowest point on the deck.  (Lowest drawn point, not quite currently the lowest point.) 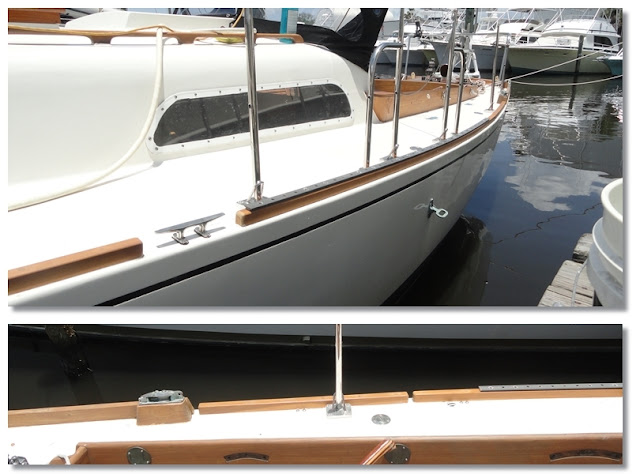 And to cap it all off our diesel-soot-dumping twin engine 2000hp 54' sportfisher neighbor went for a father's day fishing trip the next morning, so we got our first full profile view of the boat in six months.

In today's blazing heat I installed the last of the lifelines.  I had already made the first eye in all of the lengths of line.  We chose 1/4" Dyneema 12 strand because it is stronger than the typical 3/16" vinyl coated steel cable that most people use and it is 1/7 the weight.  It even floats in water.  Amazing stuff, I can't say enough good about it, but I have heard that the UV life is about 5 years, though vinyl coated lifelines will be cracking and rusting about that point too.  I got 110 feet of the stuff in a couple left over off-cuts from a rigging company for way less than it typically costs per foot.  Plus we get to splice our own eyes instead of having expensive and heavy swaged fittings and turnbuckles.  In this case, 12 strand single braid uses an Interlocked Brummel splice to create an eye.  The splice is so simple and effective, and 12 strand single braid feels so good in the hand that it has me thinking about doing most of the running rigging in 12 strand polyester single braid.
Brummel splice instructions are easily obtained online.  I use Jamestown Distributors extensive library of splicing guides for all my needs...  But I'll give a brief description so you can be impressed with the simplicity and elegance of this splice.  :-)
Basically you invert the rope through itself at two marks on either end of the measured eye length by running the end of the rope through the center of the marks with a spicing fid.  Then just re-invert those holes from the opposite direction down the length of rope  First the re-invert the mark closest to the end, slide it past the second mark, and then re-invert the second one.
It results in the rope piercing itself twice with the two piercings "interlocked" with each other, requiring a total disassembly of the rope braid to cause failure, and looking a bit like an M.C. Escher painting. The tail end is then just buried back down inside the braid to prevent this.
Eye splices don't come any easier than this.  To get a simpler loop termination one would have to use a bowline, a slipped underhand, or two half hitches; can I get an amen? 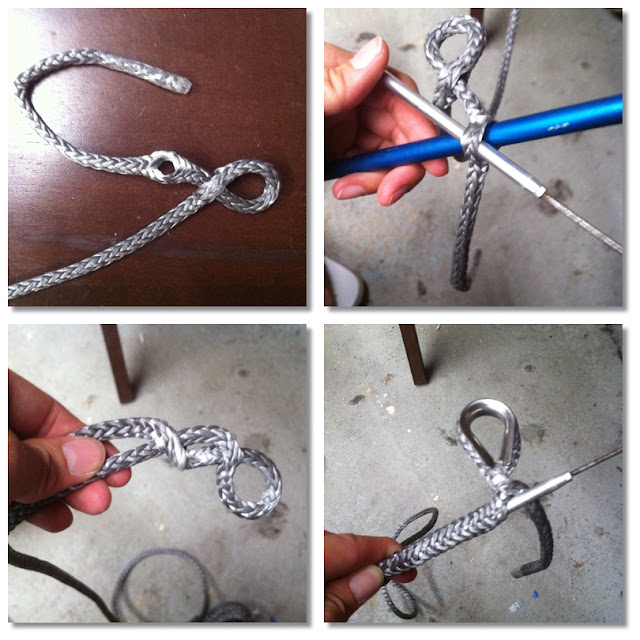 To finish, we attached some threaded eyes through the holes at the tops of the gates along with some 3/16" quick links.  This was my first splice, and I buried far more tail than I needed to, and disturbed the rope strands far more than I should have as you can see by the color change (dyneema is naturally white, but coated in a gray, waxy substance), and the poor lay of the rope over the buried tail.  Nothing to make it weaker, but it isn't as pretty as it should be. 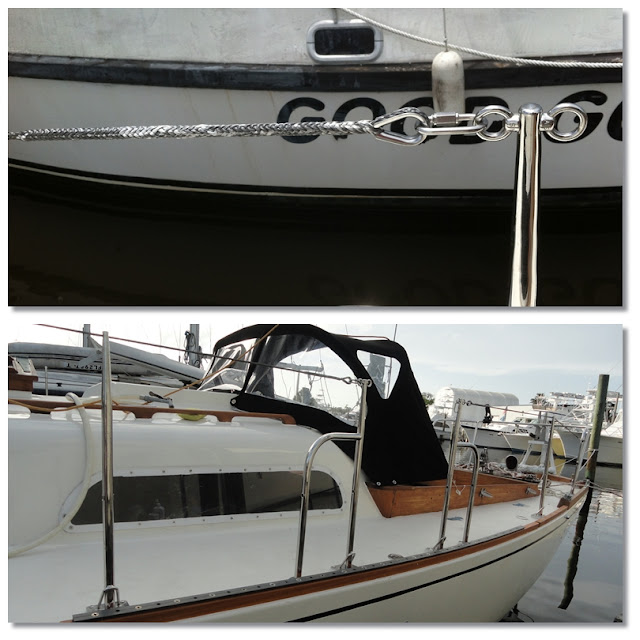 Then we just tension the far ends with a 4:1 purchase of 1/8" line held tight with four or five half hitches, dead-eye-style.  For right now I'm using a bit of 1/8" polyester cord, but we are going to replace it with 1/8" dyneema before sailing.  This also shows what a near-perfect Brummel splice should look like.  You can clearly see where the tail is buried with very little strand disturbance and a perfect herringbone pattern. 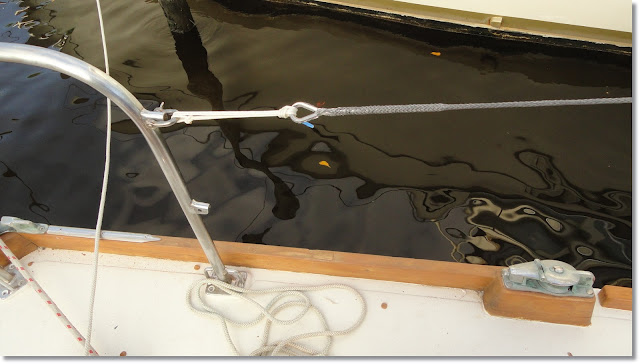 Discussions of installing lower lifelines are still in sub-committee, but the bill will likely be tabled for another few months.  There is a strong aesthetic argument for single lines with a compromise of dual lines from the Testys party, but the Fem party is citing tool-loss statistics as scientific backing for for a knotted cord net based solution.  Excessive tool-loss from a sweaty and heat-dumb summer work environment may sway popular support for the Fems when the motion is reintroduced at sailing time, but for now the Testys are winner by default...