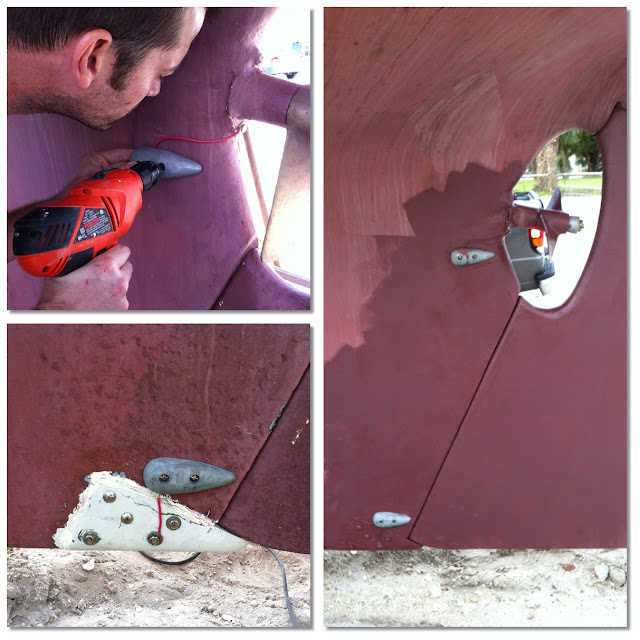 We installed two LED lights on the hull under the cockpit. Underwater marine lights run into the low hundreds, but the Chinese make 750 lumens waterproof cast acrylic LEDs for $15, complete with rubber pads. So we gifted ourselves and installed something fun. We'll be able to light up clear tropical waters under the boat and attract the creatures. Also, they could be quite useful for servicing the prop or rudder under water. They install with 4 skinny screws, and a hole for the wires to enter the boat. I sanded off the bottom paint where they would be placed. We caulked both sides of the rubber backing pad, gluing the light to the pad and the pad to the hull. Then AJ screwed it through the hull into the cockpit lockers. 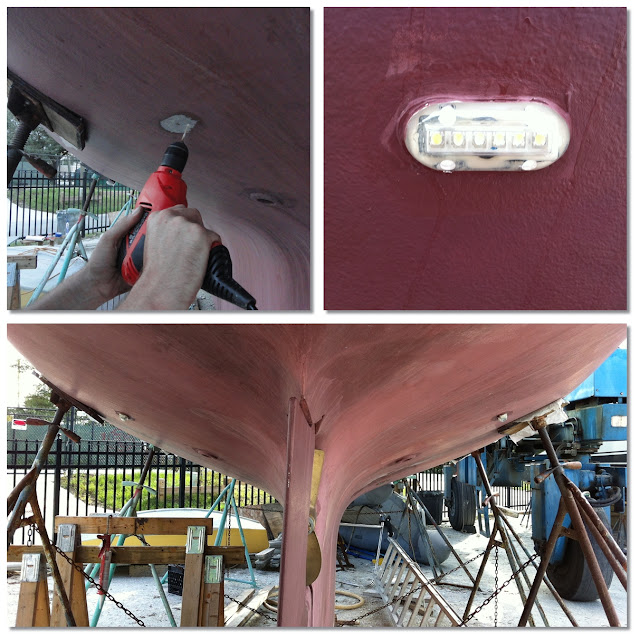 The bilge pump was installed. We have a second one to place above this one, but it's missing it's screen. So we'll add that one once we get that replaced. That portion of the bilge will get painted with the rest of the subfloors eventually. 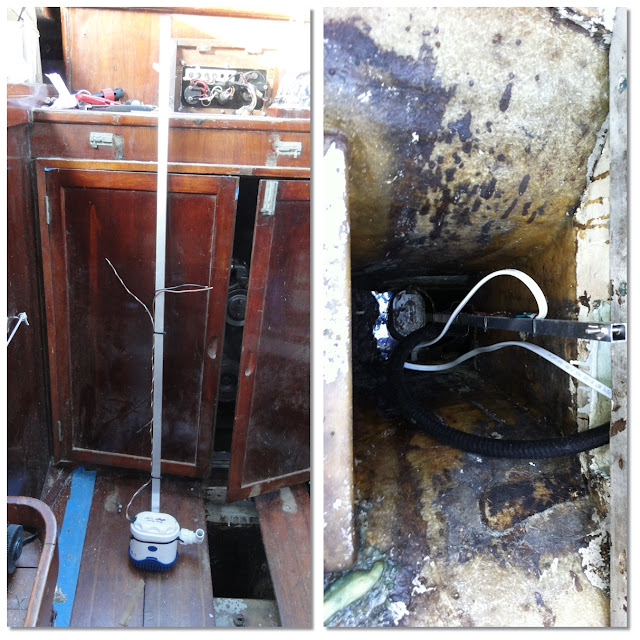 I painted the gudgeon and prop, then taped off the waterline for a touch up. I still had almost 2/3 a gallon of paint left after that, so I gave the rest of the bottom one last coat. It's been 6 months or more since it was painted, so it was in need of reactivation anyway. I'm glad we had just barely enough left over to cover it! 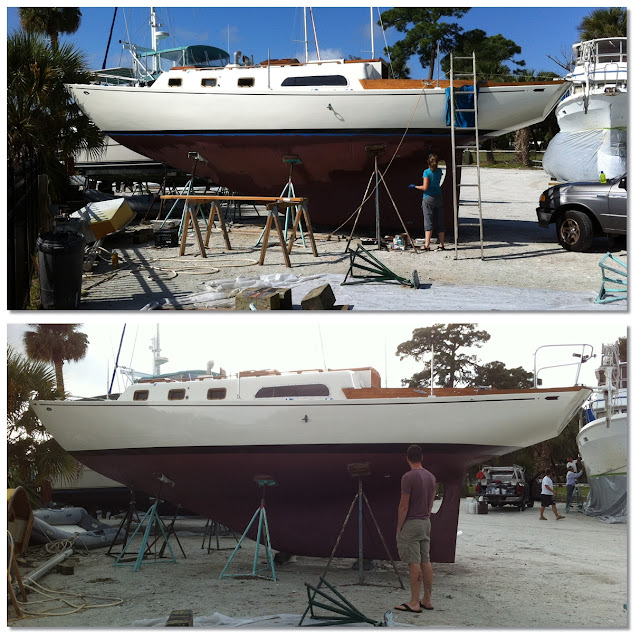 We installed most of the deck hardware before we left for Christmas. The two aft cleats, vents, dorades, etc.. We are using starboard pads instead of wood this time. No varnish, no rot. Easy peasy. I liked how it turned out, the white pads make the deck look a lot less cluttered. We caulked the deck hardware with 4000 UV, and through bolted. 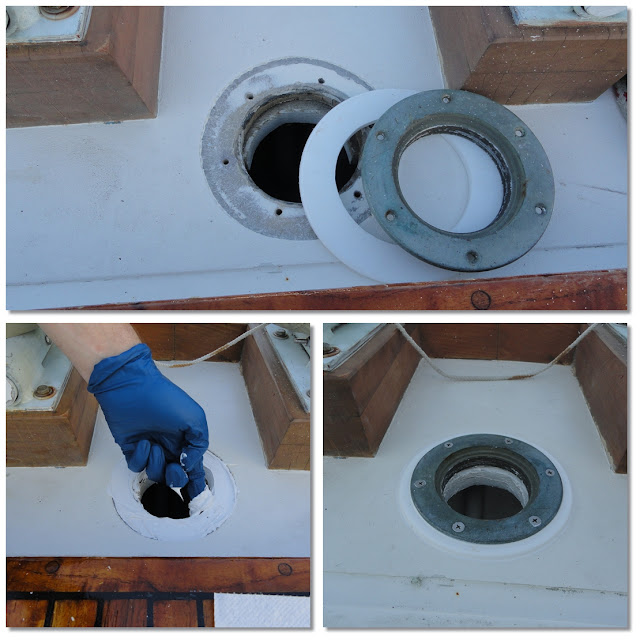 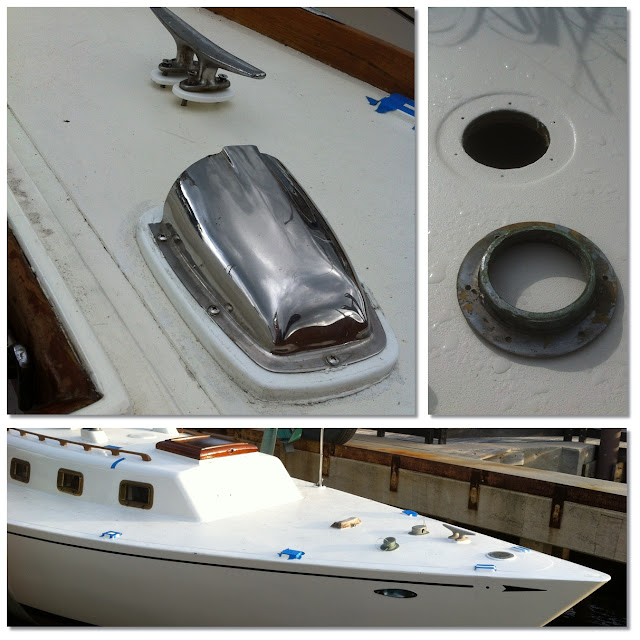 You may have noticed that there is only one cleat up front. We intended to remove and re-bed both, but the one shown refused to come off. It leaks into the anchor locker, but it's solid. We would have installed the other one, but we could not find the right size bolts in town. Except for at West Marine, who wanted $5.00 per bolt. We only need 8 for both cleats, but we just couldn't suck up the cost when we can order all 8 for $5.00 online. Even with overnight shipping we'd save $25.00. So we decided to launch with just the one. It will hold until the bolts arrive regular mail, and we can install the second one. The stubborn one is on wood pads, but Danny painted over them. They're awl-gripped in, thus match the starboard pads of the second one.. Maybe we should smear some caulk on the bolts and let it be.

Monday night Robin was slung in preparation for a Tuesday morning splash at high tide. 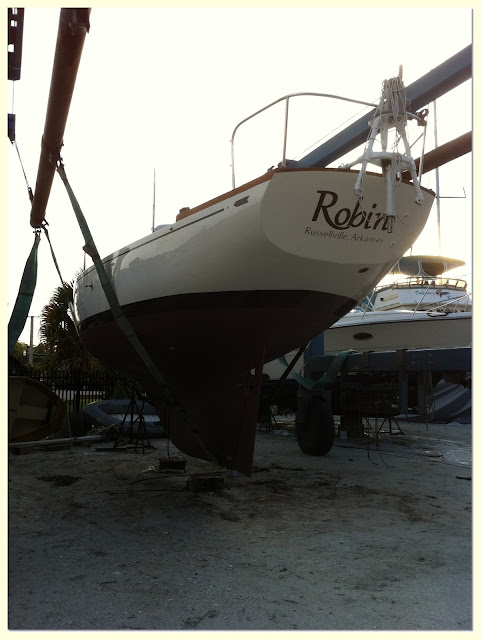 The lead keel dented from the front stand! Maybe we were on the hard too long... 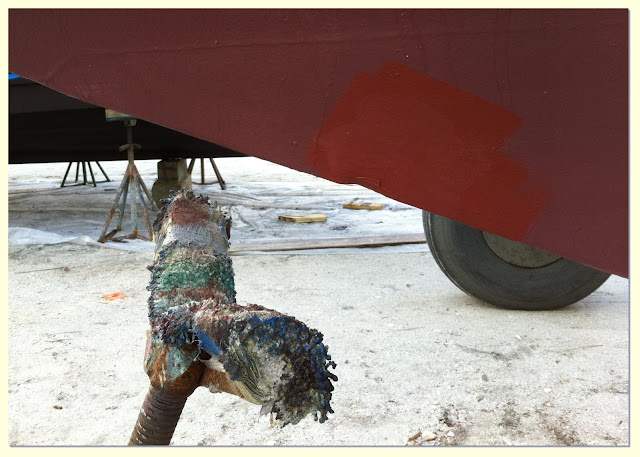 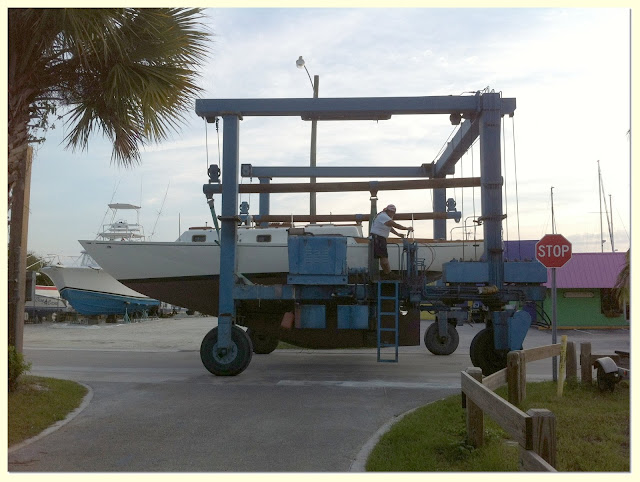 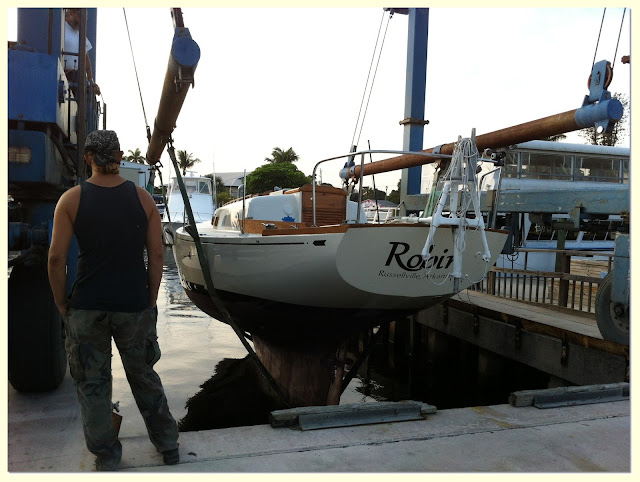 Once floating we checked for leaks, then started the engine. Well, tried to start the engine. It turned on, sputtered some water and exhaust out the exhaust thru hull, then died. And it wouldn't turn over again, or even produce the obscene beep when the key was in. AJ and Bill spent the next hour checking and testing. Everything was in order, but the engine wasn't getting fuel. It was decided that there was probably air in the fuel lines. They had to bleed them for a while, but once reconnected, the piercing beep was back and the engine roared to a purr. AJ and Bill cast off and motored over to our dock, which is just down the way and around the corner from the boat yard. I hopped in the truck with David and we drove over to catch the dock lines and tie off the bow. They got there just about as fast as we did. 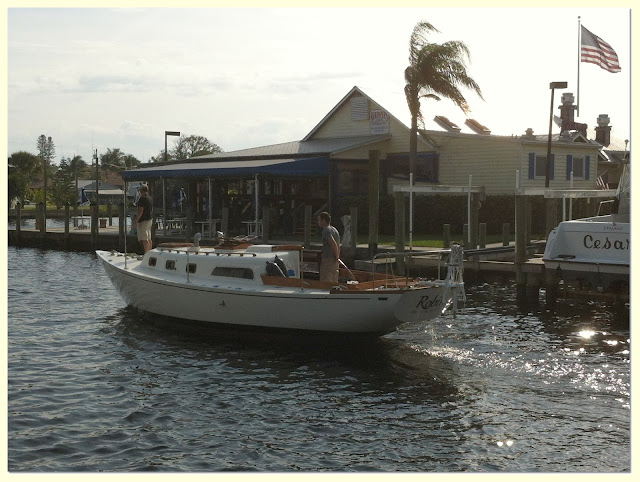 Docking went off without a hitch. Though it took some lassoing skills to catch the aft pilings. 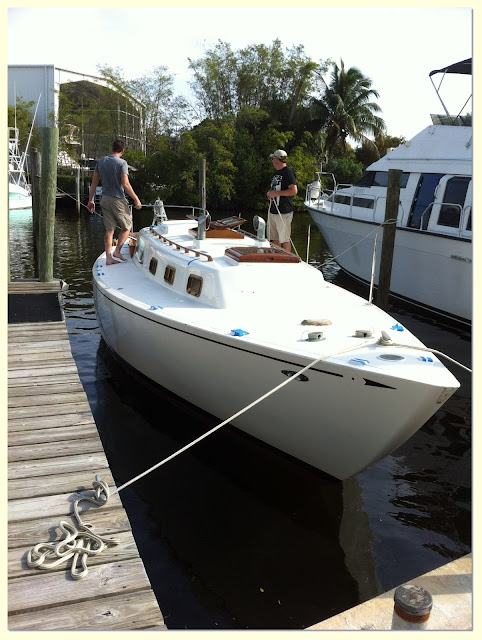 So far so good. So far so excellent actually after we discovered this: 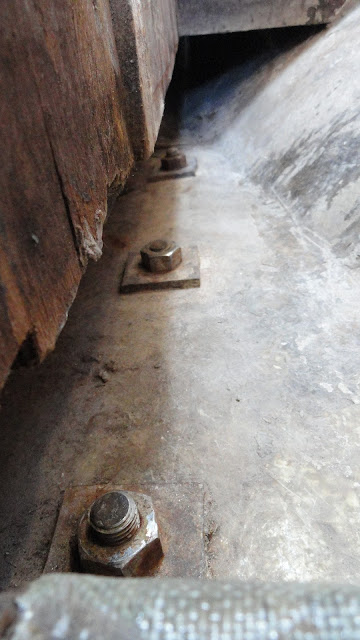 Bone dry keel bolts. They were even sitting in water on the hard. I've never seen them dry until now.  Maybe we did something right somewhere....

We installed the pulpit and 3 stanchions on the hard before launch. When we were cleaning the pulpit bases we found the hull number etched into the bottom. It's the original Hong Kong stainless pulpit, and is still in great shape. It was dingy and rusty after sitting under the boat so long. Surprisingly, the surface rust came right off with Comet stainless appliance cleaner and a Brillo pad.  We gave it a little polish after that. 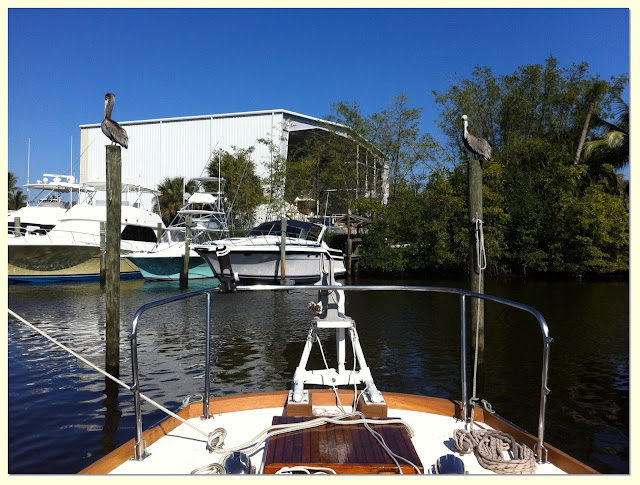 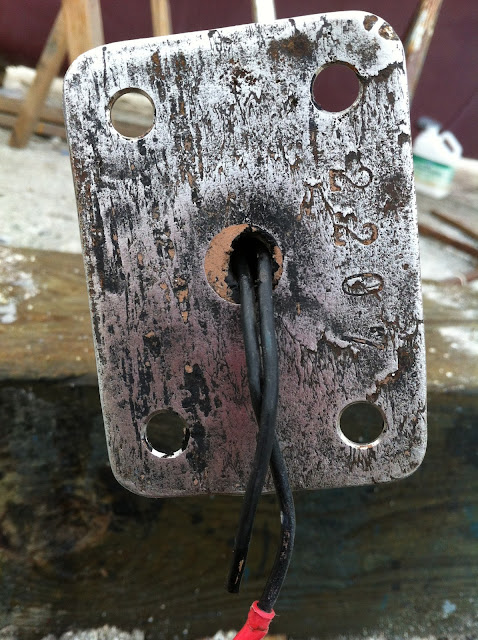 We installed the rest of the stanchions after we docked. All except for the two gates. We still have to make a couple pads for them.  I caulked and dropped the bolts in from the outside and AJ cranked down the nuts and washers on the inside. 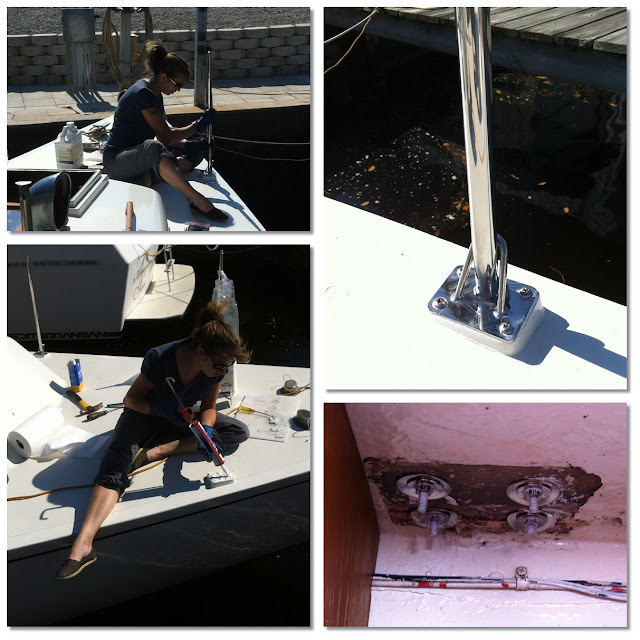 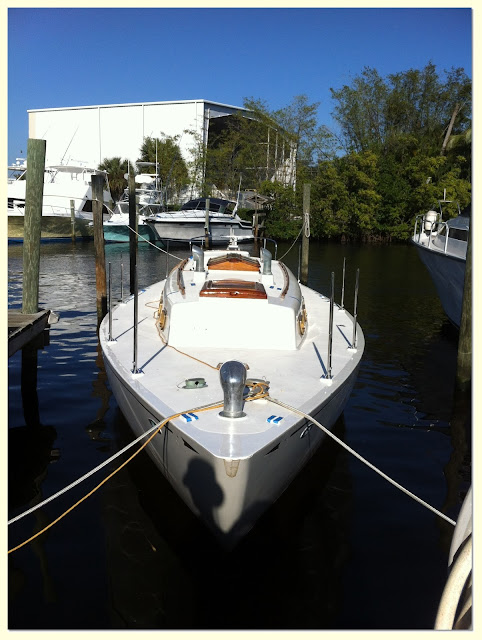 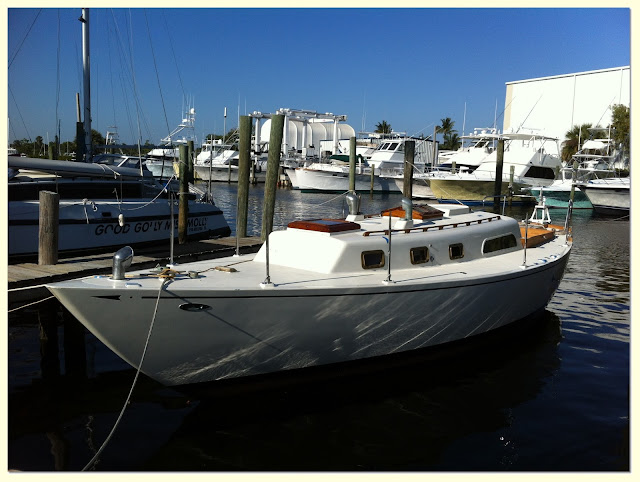 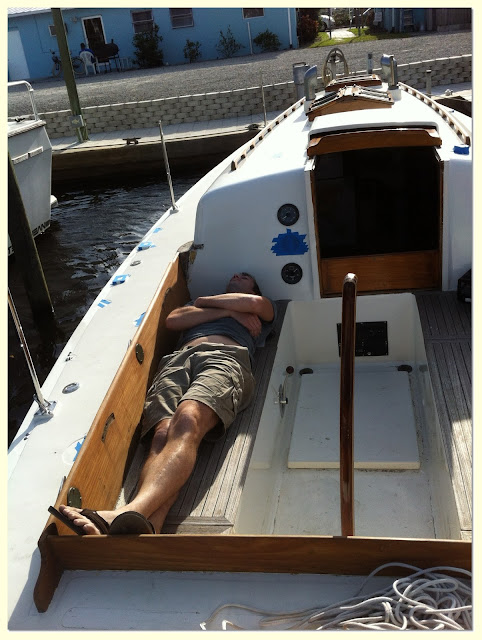 P.S. My hard drive with all our travel pictures, music and movies died. My entire digital media collection is gone forever.  But there's more bad news, half of the pictures on this blog have vanished also. I have to re-upload them all, only I don't have all of them anymore, so I must spend hours reclaiming them from Flickr. But the good news is there is wifi at the dock!  Which means I can blog! And start rebuilding my media collection.. and start replacing the pics on the old posts. *sigh*