This is how it all started a few months ago when the mast was delivered by Mack Sails (via Sparcraft):  a 46 foot prepared extrusion, and a pile of spreaders and castings.  The mast is a factory surplus spar (likely) from a Beneteau Oceanis 381.  It looks to be about 5-15 years old judging by the UV damage on the exposed portions of nylon sheaves and pre-installed nylon messenger lines, but it has never been stood nor even assembled.  I am educated-guessing at the boat only because I know that Sparcraft is a long time mast supplier for Beneteau, and the rig measurements and apparent age arrangement and types of the parts are a match for the Oceanis 381.  Luckily the masthead and sheaves were in place, the spreader bar and rigging insert holes were already drilled/cut/machined, and conduit with two runs of triplex marine electrical wire and three extra messenger lines were already installed.  Assembly proved easier than I thought it would be.

I had never assembled and stood a mast (at least not one that I couldn't pick up and drop in the hole by myself) and it had never been assembled or stood, so instead of having Mack prepare the spar, I figured we could both have our "first time" together...  (I hear it is more "special" that way...)

There are quite a few differences in this rig from our old one, but none that were a deal breaker at the price of a factory surplus ($3000) over new ($6000+!), especially when the only other 40 foot long spars I could find were very-well-used (why else would you remove it?) and still $3000+

At 46 feet long, this mast is six feet longer than our old mast.  That's a 15% increase, and a little bit more than I am comfortable with.  So I started by sawing off the bottom two feet to bring it in at a slightly more conservative 10% increase.  I would have split the difference and taken a foot off of both ends in order to keep the spreader locations more balanced, but the masthead on this spar is a welded unit and not a removable cast/machined cap, so the mast lengths between spreaders are now (bottom to top) 13', 15' 16' as opposed to 15', 15', 16'...  I guess the spreader lights will have to be a bit low...

Here is a shot showing the new mast's cross section, the conduits, and the quality of my hacksaw cut.  : ) I'm proud that I had less than 1/32" run out from perfectly perpendicular with a hand tool.  A touch up with a bastard file makes it perfect. 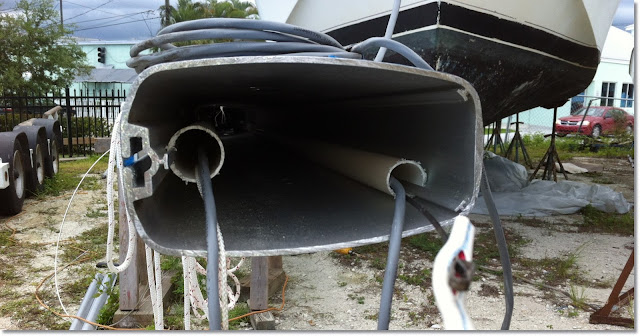 ***
Thoughts on double vs single spreader rig:
When calculating column buckling strength, shorter is stronger, therefore the diameter and wall thickness of a column can be reduced to achieve similar column buckling strength on a shorter column.  Spreaders with triangulated wires effectively separate a column into sections that are calculated for buckling strength separately.  So a double spreader rig makes shorter-therefore-stronger, sections of mast, and the final product can take advantage of this by using a smaller and thinner cross section   ... never mind advances in aluminum metallurgy since 1969...
***

While a smaller mast does result in slightly less spoiled air near the leading edge of the sail, the advantage is likely immeasurable.  The biggest advantage to strive for in any rigging change is weight reduction aloft.  We want to be lighter.  Lighter is better (*as long as it is strong enough*).
The new mast extrusion is much lighter, plus the big heavy wooden spreaders and fittings on the old rig probably weigh the same as all the new tapered aluminum spreaders and spreader bars combined, but due to double spreaders (and double backstays,) the new rig requires about 70 extra feet of wire, eight more termination fittings, two turnbuckles, and some other assorted hardware aloft...  I'm not sure which rig will end up lighter in the end, and I since I didn't weigh the old rig, I'll never know.  It'll probably be a wash, but with the increased sail area and height of the new rig, we are going to increase our ballast 10% anyway.

The new rig also has only one set of lower stays (D1), that meet up inline with the main outer stay/shroud (V1), instead of the more traditional "square" of four lower stays like our old rig.  I'm not as excited about this, and while I could have assembled it with four stays, it would have required a whole lot more hardware and wire aloft (lbs + $$), so I opted to stick with the single stay arrangement.

Other new rig differences include a kind-of-fractional genoa: the attachment point for the forestay is about 18" from the top of the mast.  Plus there is a long kicker arm on the back of the masthead to clear a mainsail with a bit of extra roach.

But onto the assembly already!
I started with halyards as I wasn't yet ready to start drilling and tapping my valuable extrusion.  There are four "halyards" total: the main, the genoa, a topping lift for the boom, and a spare on a sheave just under the genoa.  The new rig has internal halyards, and I was worried that fishing them through the mast would be difficult, but with an electricians fish tape the job was done in minutes.  I also got a chance to try out our new double braid rope splicing fids to make some eyes in the ends. 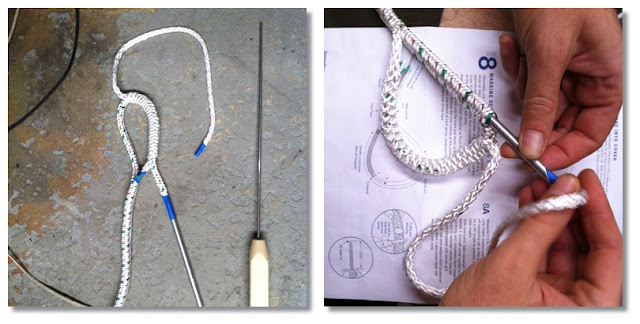 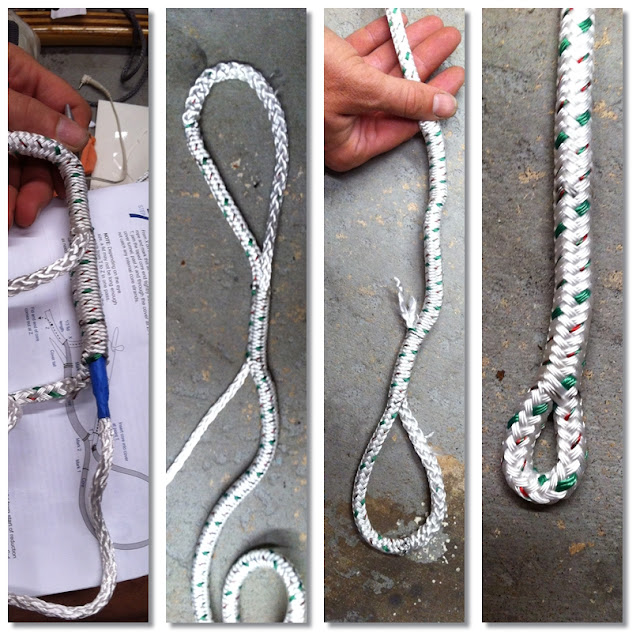 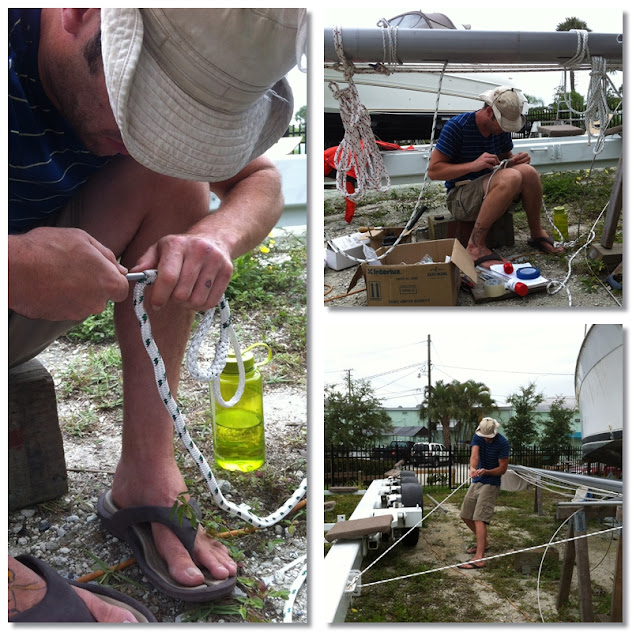 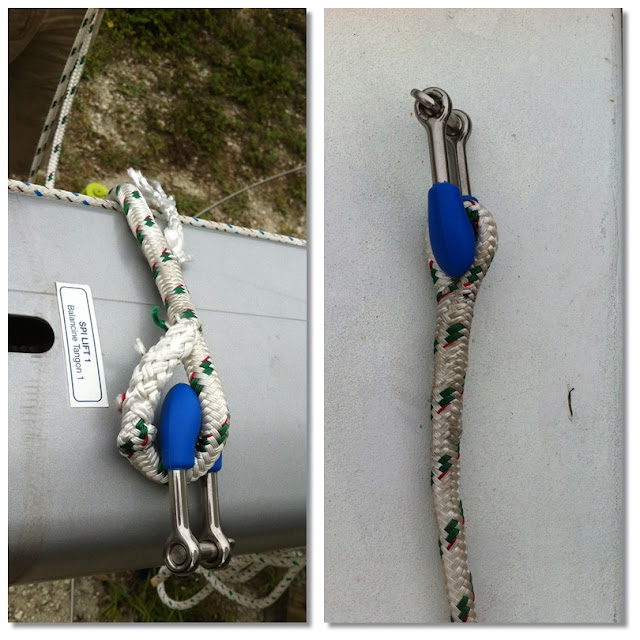 The foredeck/steaming light was the first drilling/tapping job I did.  It already had wires run and only required a couple holes drilled and tapped for #10 machine screws to match the mounting flange on the light.  With the confidence of the first holes drilled, I moved onto the Stecktronics LED mast head light, antenna, and wind speed instrument transducer.  Sarah was hard at work on the mast base while I was at the mast alone that day, so without Sarah photographing the process, all you get is a few finished photos.  The fit is tight, but due to wiring hole locations and limited mounting possibilities, I really couldn't come up with a better way.  The antenna at the back will take an antenna-mounted windex wind direction indicator.  I made sure that every wire passage into the mast had a rubber chafe protector, and entry to the devices was sealed.  All wires have drip loops where applicable and secured with rubber lined stainless straps with #10 screws, plus I left a spare messenger line for future servicing. 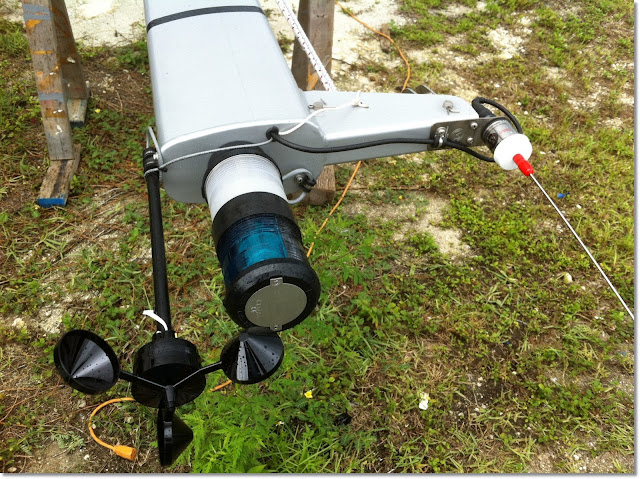 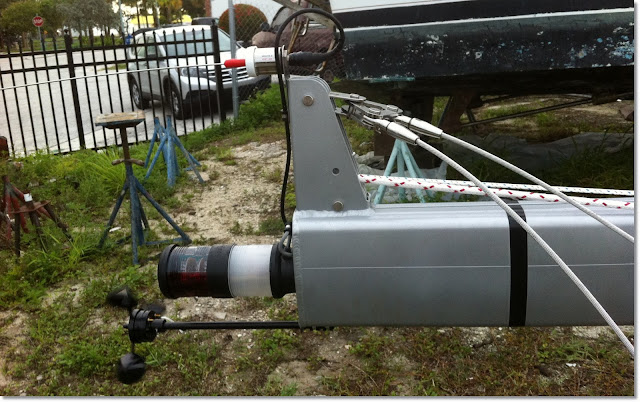 With the first wiring and drilling/tapping of my precious spar, now I could figure out the slightly more complex spreader light installation.

Last year I bought five waterproof 12vdc LED lights for $10 each on eBay specifically for this purpose.  They are billet machined hard anodized aluminum with a single hole in the back and a threaded rim on the face, both sealed with thick quality silicon seals, polished stainless hardware and a hard acrylic lens.  They also have a single huge CREE LED chip that burns 0.1 amp while making 900 lumens.  It seems impossible until you put an amp meter on them.  They can burn holes in your retinas while staying completely cool in your hand, and they won't burn out for ...  ever.  If you haven't seen the new LEDs and LED chip technology that has been coming out of China in the last few years, let me tell you it is truly amazing, and the prices are ridiculous.  Don't waste money on "marine" LEDs when products like this are actually superior and exactly 5% the cost. ($10 vs $200).  When it comes to LED and solar panel manufacture, the Chinese are leading the way. 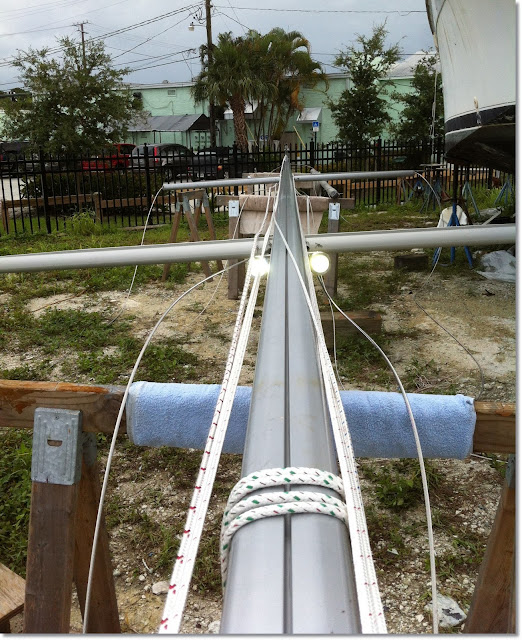 The spreader bar is a stainless steel casting (with a strange bronze-y but-not-rust finish) that has two large holes to allow insertion of the stem ball fitting on the D stay from below and two small holes for the spreader retaining pins.  It pierces the mast through a hole that is quite small to have work your fingers into and try to do anything of substance inside the mast, but I managed.  You can also see the hole I first drilled for the spreader light wiring when I was originally going to mount the lights on the spreaders and run the wire through the top.  Then I got smart and mounted the lights below the spreaders on the mast...  I guess now they are called mast mounted deck lights? Much easier and cleaner. 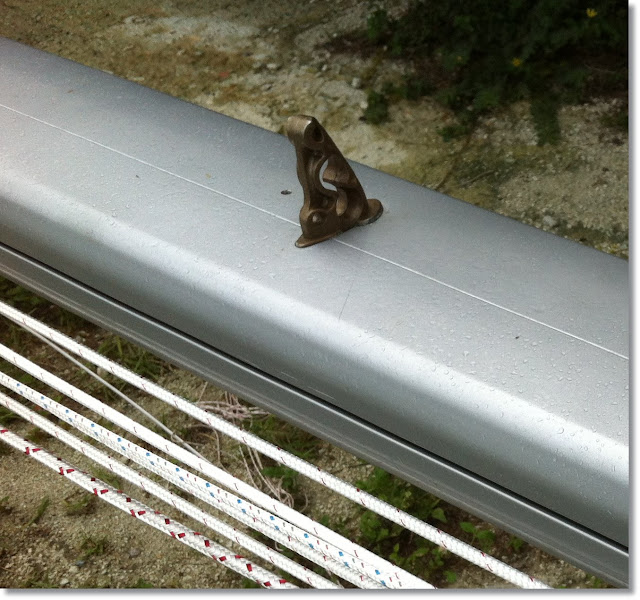 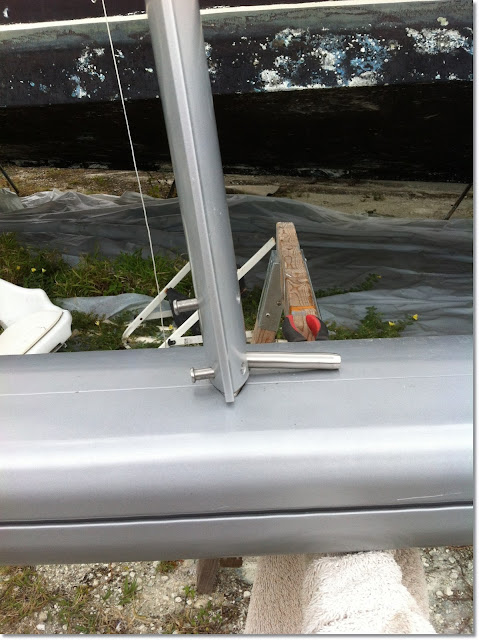 Damn, I put the spreader pins on before the stemball...  not so slick, Slick... 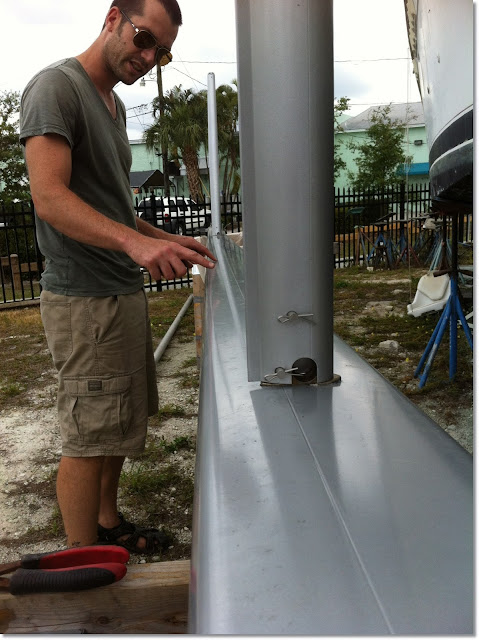 All the lower fittings are Hi-Mod mechanical compression terminals from Petersen stainless of England (Hayn Rigging sells them in the US).  I chose Hi-Mod over Sta-Lok and Norseman because they do not require you to deform the wire around the tip like Norseman does, and they do not deform the inner cone around the wire like Sta-Lok does.  Sta-lok also requires you to shorten the outer strands of the wire an extra 3mm.  With Hi-Mod fittings you just cut the wire off clean, slide on the outer casing, "open" the outer lay of the wire, slide on the cone and crown ring, rotate the outer strands back around and into the crown ring, and screw it all together.  It requires no sealant and nothing deforms on compression, so it can be disassembled, cleaned, and serviced years later without replacing any parts. 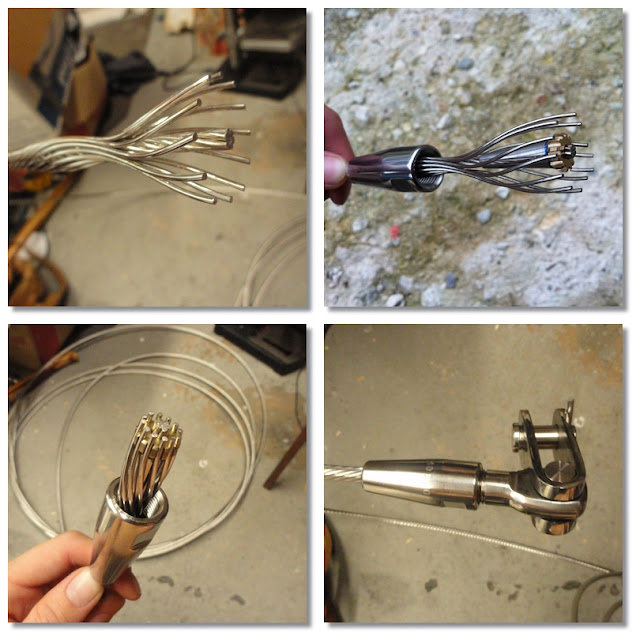 Below are a couple pics of the cast aluminum lower spreader tip where 1/4" diameter upper wire V2/D3 ends in an eye and meets the 9/32" diameter lower wire V2 inside its toggle with a single 1/2 pin through it all.  Also a slick, smart set up.  The D2/middle stay ends in a turnbuckle with another stemball set just inside the 1/2 pin in the cast tip. 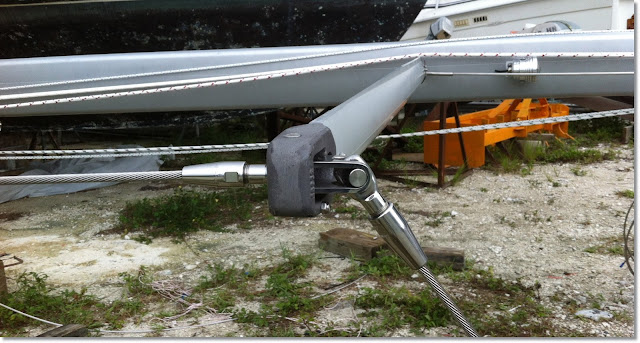 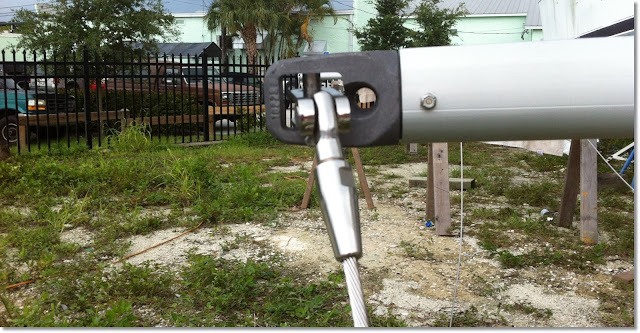 We got it all set up except for the stemball fittings at the lower end of D2.  We originally bought 7/16" turnbuckles and stemball stud hardware to terminate the wire, not realizing that 7/16" hardware has a #8 ball on the end.  3/8" hardware has a #6 ball, which is what we needed here, so we had to return and reorder a few parts.

But even with all this delay, we aren't the one's pushing the schedule.  Rain (you might have noticed Tropical Storm Andrea) has pushed Mack back by about two weeks and they are trying to catch up.  We should be on the schedule this week...  later this week...  Expect some proud pictures of an actual sailboat on the next post...  okay, still just a masted motorboat, but sails are on the cutting floor at Mack right now!
Posted by Andrew Lea at 9:19 PM