Worn, broken, or degraded parts I understand, (and we have slowly eradicated most of them from the boat), but stupid parts I do not understand, and our mast support structure contained a lot of stupid that needed be exercised.

Delaminated plywood covered the only good factory piece of the mast support structure: a solid 3 1/4" x 8" old Burmese teak mast support beam, and a mystery wood front edge backing board that was seeping sap.  As you can see, the massive beam is mounted off center, or rather, the starboard face is on center, and the rest of the beam is off to port from there.  It was designed and built this way. Not completely stupid, but obviously simplicity of build and design were higher priorities than centering the support under its load.   Probably part of the reason that the cabin roof was sunken a bit on the starboard side next to the mast last time it was rigged.  We will solve this problem in the next post.  First we have to get something underneath this beam as you will see below. 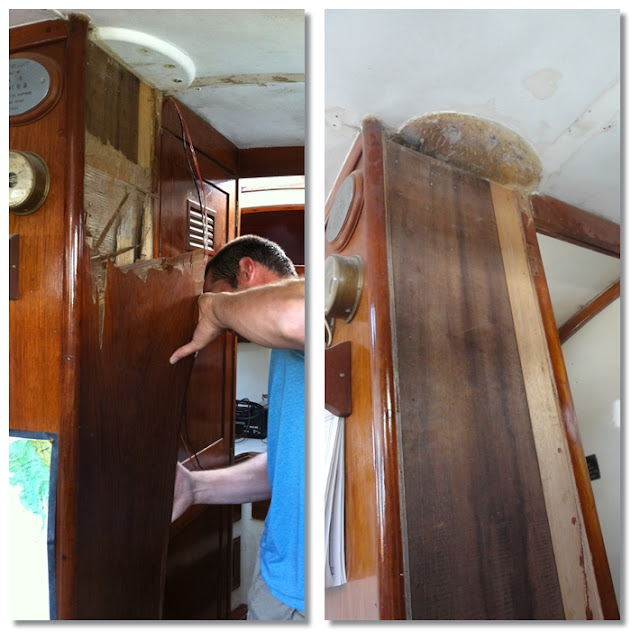 Top: Rotting crap under floor outside the head with a cedar 2x4 on its side posing as a mast beam support.
Bottom: Rotting crap removed...  nothing of substance anywhere. 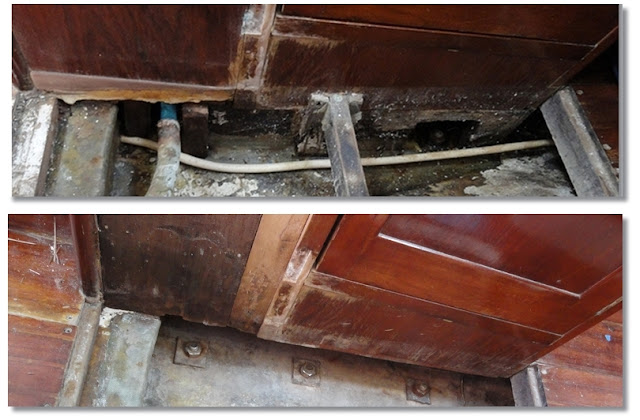 Below is the teak mast support beam from the other side, inside the head.  A board that the cranky old Wilcox-Crit "Imperial 51" toilet was mounted to was removed to access the base. 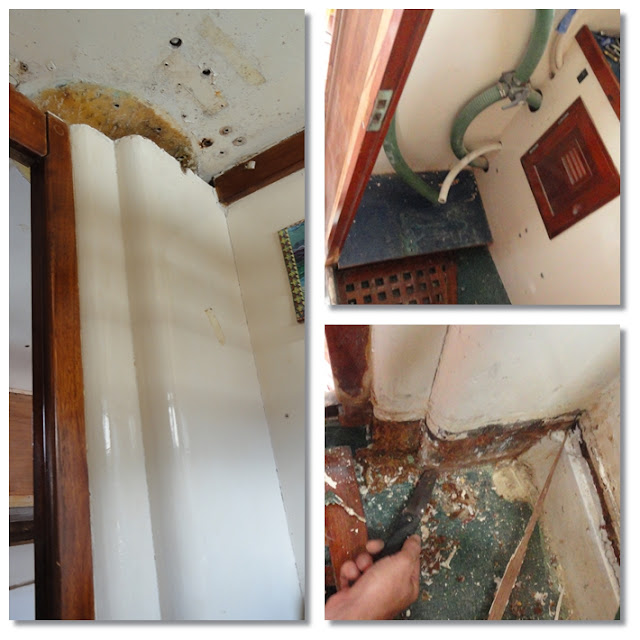 The bottom few inches of the mystery cap beam were mush, and about an inch of the main beam as well. So soft you could dig it out with your fingers.  I cut off the rotten portion plus a generous bit of extra to get the wooden mast support out of the bottom of the shower.  That old Burmese teak proved a serious workout. 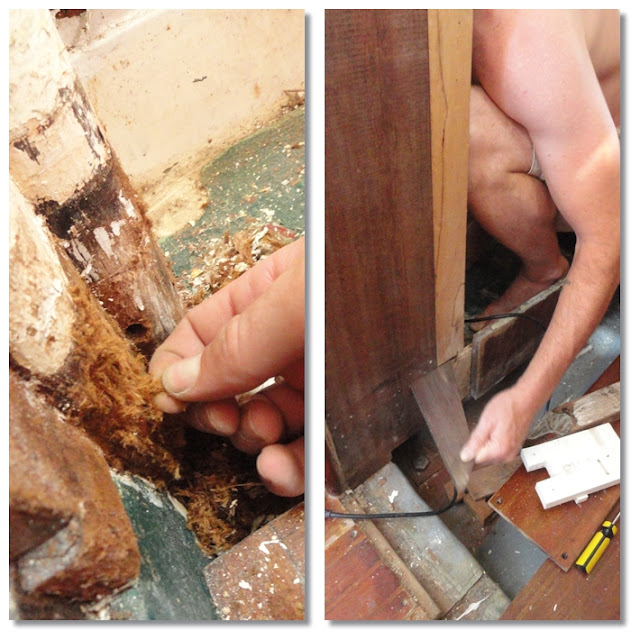 With the cut made, we then removed the mystery blonde cap beam, which had our factory hull number, 2207 written in pencil.  This now makes five times that we have seen it aside from the wall plaque: Under the port base plate of the stern pulpit, behind the wet locker hanger mounting board, under the most forward starboard floor board, on the most forward floor beam, and now on the mast support beam's cap beam.  All in the same handwriting, except the stainless pulpit, which was die stamped.

Left: the large, complex end cut of the main beam to clear the edge of the head basin: lots of work to make a cute but structure-less piece of crap
Right: COOL! MORE NUMBERS! 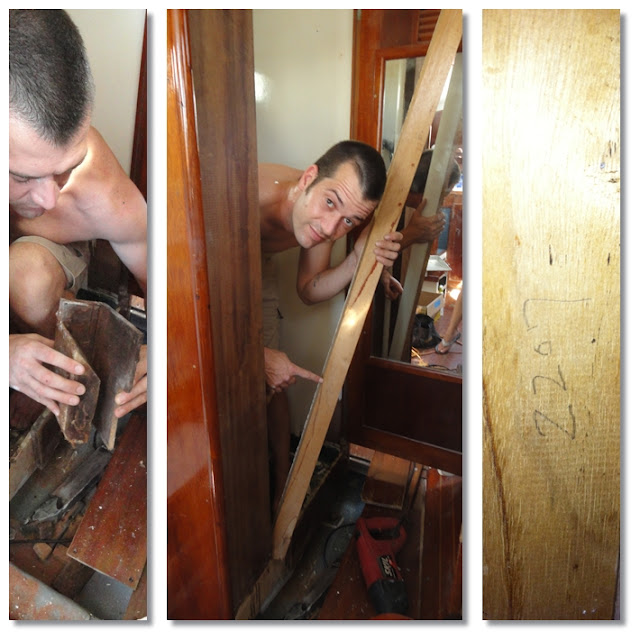 Now with all the offensive bits removed and the remainder cleaned up, the fun part: building a real "engineered" support structure. 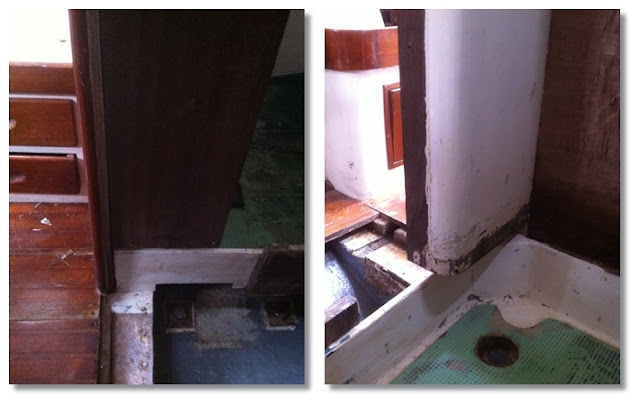 Caveat: I am not an engineer nor do I claim to be one, but I have worked closely with a composites engineer for a few months, and he taught me a few things about fiberglass that really amazed me. One square inch of *quality fiberglass can support over 20,000 pounds, which conveniently also happens to be a very close approximation of our maximum capable rig pressure. Also, you can get that one square inch however you want it, meaning, that a 1/8" thick sheet of fiberglass 8" long can also support 20,000 pounds on its 1/8" edge!   The problem, as always with thin things, is buckling.  You can (partially) solve that problem by splitting that 1/8" sheet into two 1/16" sheets and bracing them with a core.  yep, two 1/16" sheets, 8" long with a core between them... still one square inch of surface area, still about 20,000 pounds of support  Of course the thickness of the core and the height of the beam begin to play into the buckling scenario, but you get my point: fiberglass, even on edge, is incredibly strong, so vertical walls of fiberglass/foam sandwich was, in our opinion, the best solution for this problem...  I can trust the slightly-other-than-traditional method due to my background, but since I'm not an engineer, overkill is the obvious approach to the method.

*Resin-to-glass ratio a factor in final composite product strength.  As long as full saturation is achieved, you want as little resin as possible.  60-70% glass is common among older blown chop strand boats, 75% glass is a good number for hand lay-ups, but some vacuum machine lay ups can achieve over 90% fiber though usually with carbon pre-pregnated with resin and shipped in a refrigerated container to prevent curing.
Side note: if you have a sample piece from your boat (we have nice plug sample from the deck where we cut a 2" hole for the diesel fill) then you can find out your resin-to-glass ratio with a bit of work.  Just strip the sample of any core so you are left with pure fiberglass.  Weigh it.  Depending on the size of sample piece, you will likely need a gram scale.  Then burn the sample in a container. The resin will burn off, and the glass will not.  Weigh the remainder, do the math.  Cool, huh?

Right: first lay up: foam, biax, biax, biax, biax, foam.  Four layers of biax w/ mat cures to ~1/4" thick in average hand layups.  This alone should exceed calculated strength with just the thinnest support skins on either side to prevent buckling.  It was pressed between weighted boards as it cured for maximum glass compaction. 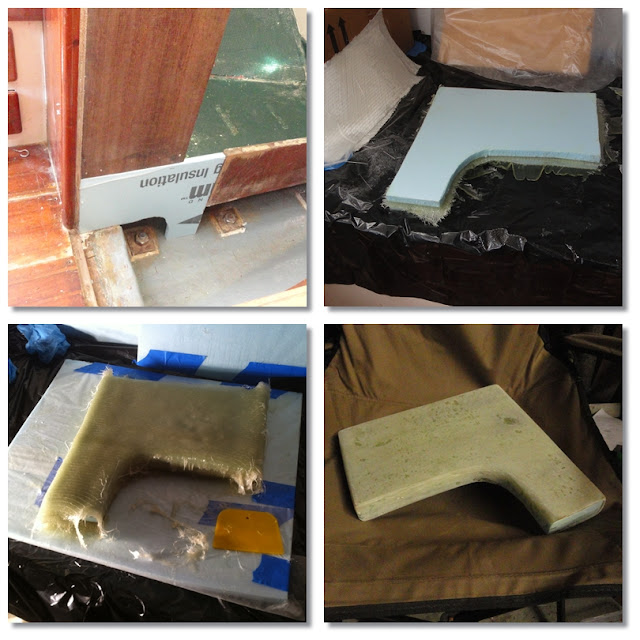 For inside the head we needed about 5" of width to fully cover the bottom of the wide-and-off-center mast beam and still have a bit sticking out to lay the head mounting board on top.

I'll save you the counting and tell you that there are five layers of 3/4" foam and 2 layers of biax between each.  Again, if one of these glass divider sheets should support the rig, then five is better.  Four on the first lay up, then the outside when it gets glassed in. 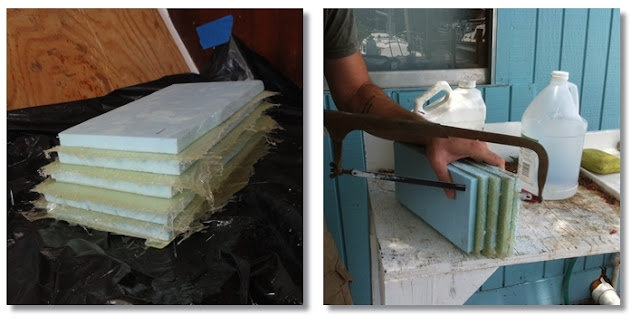 Cut off the excess and sand to final shape. 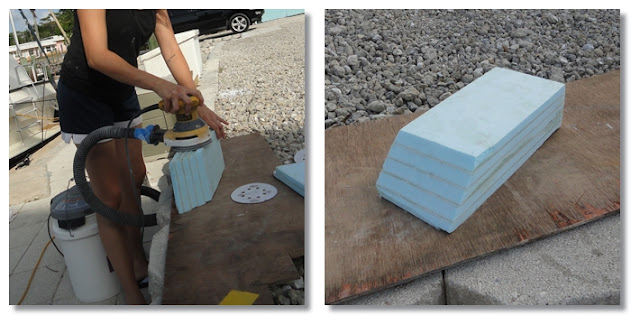 Now for the evil part.  Over the course of two and a half hours we mixed nearly 50 fluid ounces of epoxy in six different batches, blending and mixed it with almost equal amounts 1/4" chop strand and a bit of fumed silica/Cabosil to keep to from flowing.  A bed of the messy fibergoop was smeared very thickly over the inside mounting faces of every part to be assembled to ensure no gaps in the final product, plus two layers of biax were put on the top and sides, and underneath the "L" shaped piece to thicken its pressure base.  After it was all pressed together tightly, every inside corner joint was filled with a thick fillet of fibergoop. 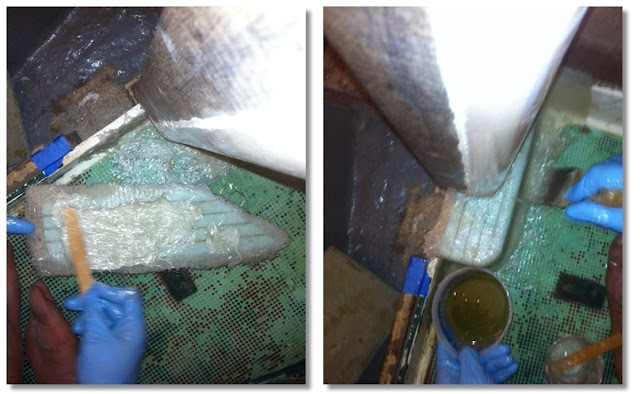 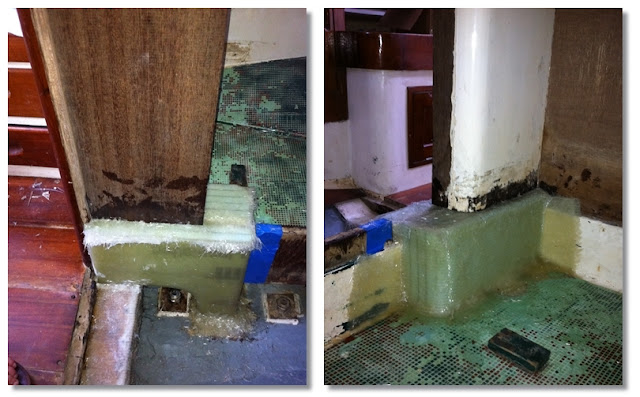 Das Überfuß ist fertig! (Well, after curing and sanding.) Now the mast actually has a leg to stand on.

Today is the final day of our original 9 day deadline. It rained for the better part of 4 days, but luckily everyone else was delayed by the rain too and Thursday was the earliest we could get a crane appointment.   We've got 4 days to finish checking off that list!
Posted by Andrew Lea at 2:21 PM