If you do a google search for "delaminating" or " fiberglass bulkhead repair" we'll probably pop up in your results. Spell check persists on telling me that "delamination" and "delaminated" aren't words, but I must protest because it would be really difficult to write this blog without them.  It's a little depressing to have done enough of this dismal work to achieve these google algorithm rankings for word combinations.  Eventually the google algorithm should favor our blog with terms like "bad-ass adventuring sailor solves world hunger" and "girl kills ass-hole shark with bare hands to save seal pups", stuff like that.  Now, I would never enter into battle with a shark without a gun, a scuba tank, and a bigger boat, but I might be there when this happens to break the story. Today, we won't be adding any new keywords.

Once upon a time there was a delaminating bulkhead.

Two delaminating bulkheads in the head. They had suffered water damage from a leaking window and chainplates.  But the damage was limited to the thin top layer of the plywood on the lower half of the walls.  AJ scored it off at a hard line and removed it. 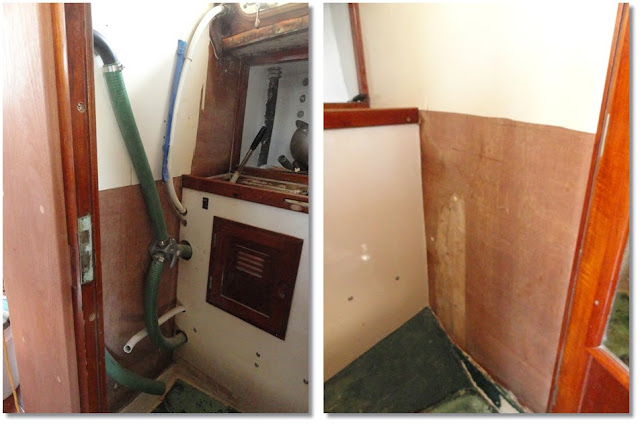 The bulkhead above on the right separates the head from the V-berth.  On the V-berth side, the bottom of the bulkhead was also delaminated.  Underneath it turned out to be completely rotted out for about five inches before going solid.  It was decrepit enough to break it apart with your hands. Can't catch a break right? 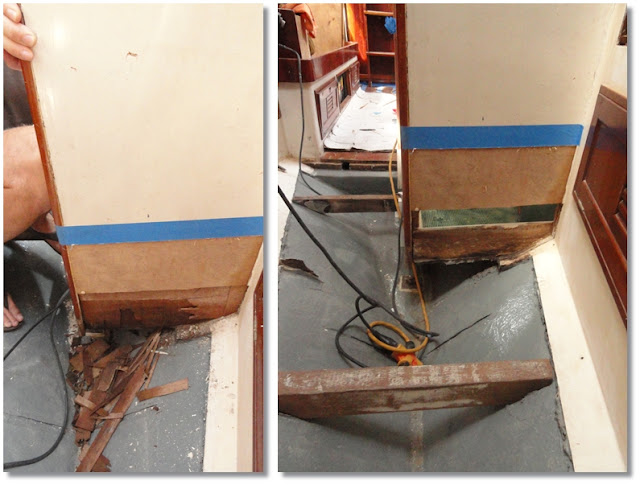 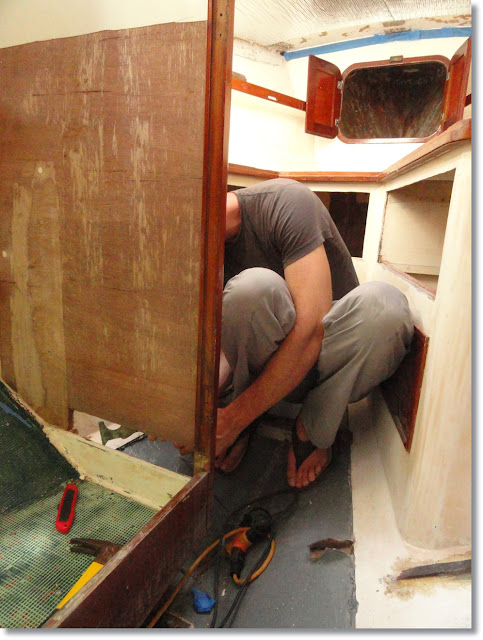 So out came the rot and in went a small section of 3/4" plywood to fill the void.

I finally got text to go next to a picture!!!

But unfortunately there is little more to say between this picture and the next one.  And no text above and below to sweetly envelope it. So this trick will do little aesthetically for this post. But I'm not going to undo this magic. It will look fabulous when there are many words and beautiful pictures.

I glued the new plywood piece in place with thickened epoxy. Then faired the uneven portions of the raw plywood wall. 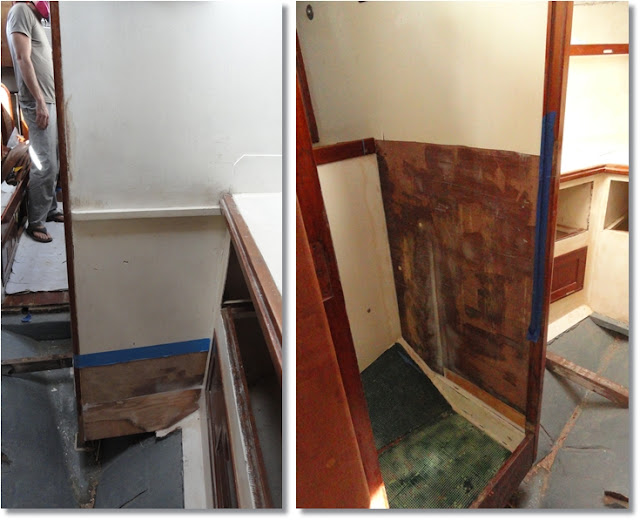 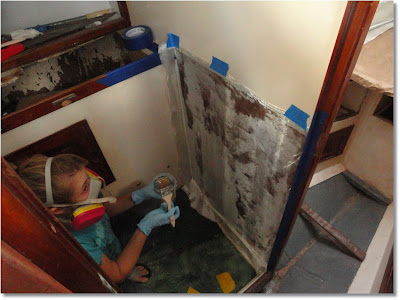 We used thin 6 oz woven fiberglass cloth to fill the gap left by the missing plywood veneer, to seal in the new repair, and to make a waterproof epoxy/glass joint from the bulkhead to the fiberglass floor basin.  Now water cannot seep between the bulkhead and the basin. The entire head is a fiberglass bowl from the waist down.

To make for the smoothest transition, I overlapped the fiberglass cloth onto the wall with a little thickened epoxy underneath in the crevasse.  That way the final cured product can be sanded smooth and flat with no transition marks.

Another nifty little trick is to come back a couple/few hours later when the epoxy is still "green", meaning it is still plastic and flexible, but has already taken (for the most part) its final shape and is not wet/sticky to the touch.  At the green stage, the semi-cured fiberglass cloth can be cut easily and precisely with a knife or razor.  Which is especially useful for inside corner edges.  If you are too late, then you will be sanding, chipping and grinding hard fiberglass.  Too early, and the cut will disturb and deform the lay of the cloth.   Also, if the edge pulls up or you notice some other gaps/pockets in the glass during the "green" stage, then you can still deform it and push it down flat with firm pressure from a paint scraper edge and it will join and cure solid to a picture perfect finish.  AJ scored the edges next to the trim and mast support in the head, and the edges in the pic below on the right. 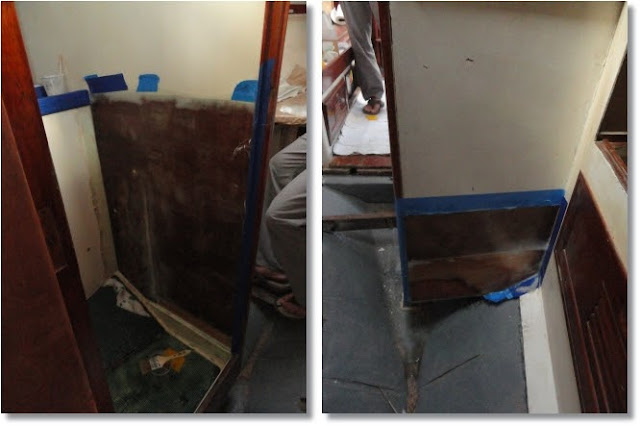 The left side of the head had delaminated at the bottom one plywood layer deeper than the rest. So I laid a thick biax fiberglass patch there, then sheathed it in the thin cloth.  After it cured I fared it by filling the cloth weave with thickened epoxy.  Tomorrow it'll get buffed out with the sander and the head will be nearly ready for paint. 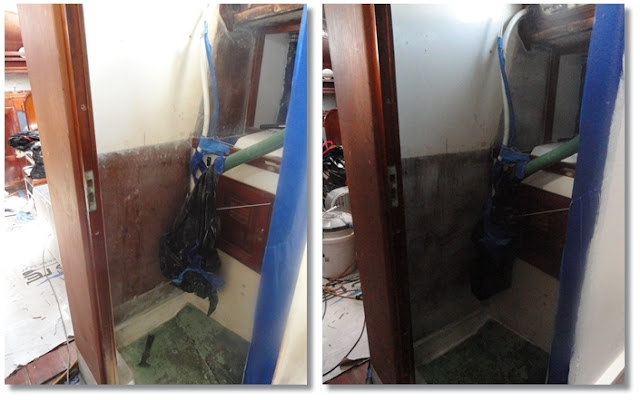 We're also almost finished with the v-berth and anchor locker.  But more on that next time.  Once upon a time there was a lot of chipping paint...