Off the Dock and On the Move

We are sitting on a mooring ball at Sunset Bay, preparing to leave for Miami.  Sunset Bay is on the north side of town, near our post office, and with easy access to what we need to finalize our exit from Stuart: namely a dumpster and a free-cycle table.  Long-time followers of the blog may remember that Sunset Bay is also where our journey began three long years ago.  It is where we bought Robin, then named Maia, and seeing the marina again brings back a lot of mixed emotions.

When we first arrived here and signed the title on our new boat, we were naively hopeful that we would be setting sail in just a few weeks.  We were happily cleaning up the cabin, fiddling with the barely-functioning systems, and living the boat life.  The reality was that we were stuck here with a broken engine, a fragile rig, a rotting filthy cabin, no running water or electricity, and enough leaks to ensure daily manual bilge pumping to keep it from sinking.  That reality sunk in quickly, and we lived that depressing life for a year.  We felt like the eyesore of the marina, and didn't know if we'd ever be able to get the boat moving again.  But in that dirty, smelly, wet year, we maintained jobs until we could haul out, knowing that without a serious overhaul on the hard, we would be yet another couple of "hopefully someday" boat bums.  Another year passed on the hard as we stripped the boat of literally every single nut and bolt, cut out all the rot, stopped all the leaks (Yes, all of them: we can proudly say that our bilge pump hasn't cycled in nearly a year), replaced thruhulls, replaced all the windows, rebuilt the rudder, and installed an engine.  We then moved to a nearby dock for another year where we rigged the boat, mounted the deck hardware and toerails, did copious amounts of fiberglass work, bulkhead repair, and painted in the cabin.

Only in the last few months has our work shifted from seaworthiness to the systems that support long-term life aboard.  Running water, solar power, a working toilet, and a stove to cook on.  It took three years, which, not surprisingly, is the timeline that most of the truly knowledgeable sailors told us it would take.  But as anxious/depressed as we have been throughout, I cannot describe how elated we are to finally have a home, a home that can give us independence, a home that can take us wherever we want to go. 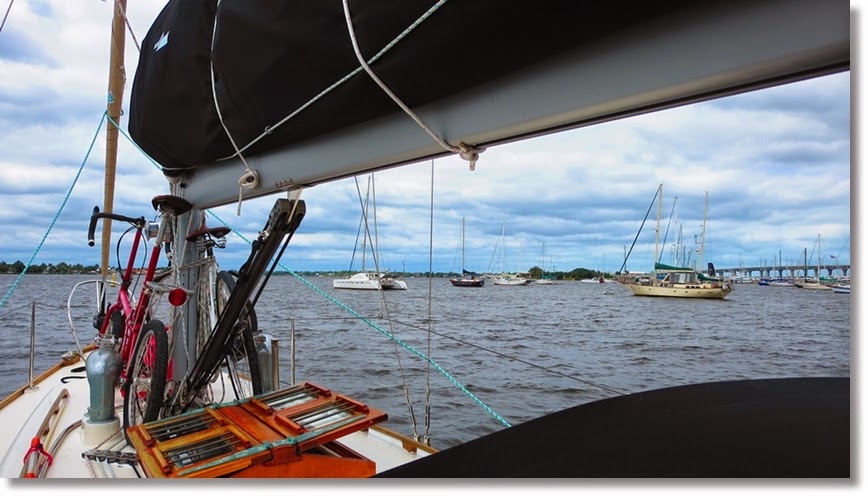 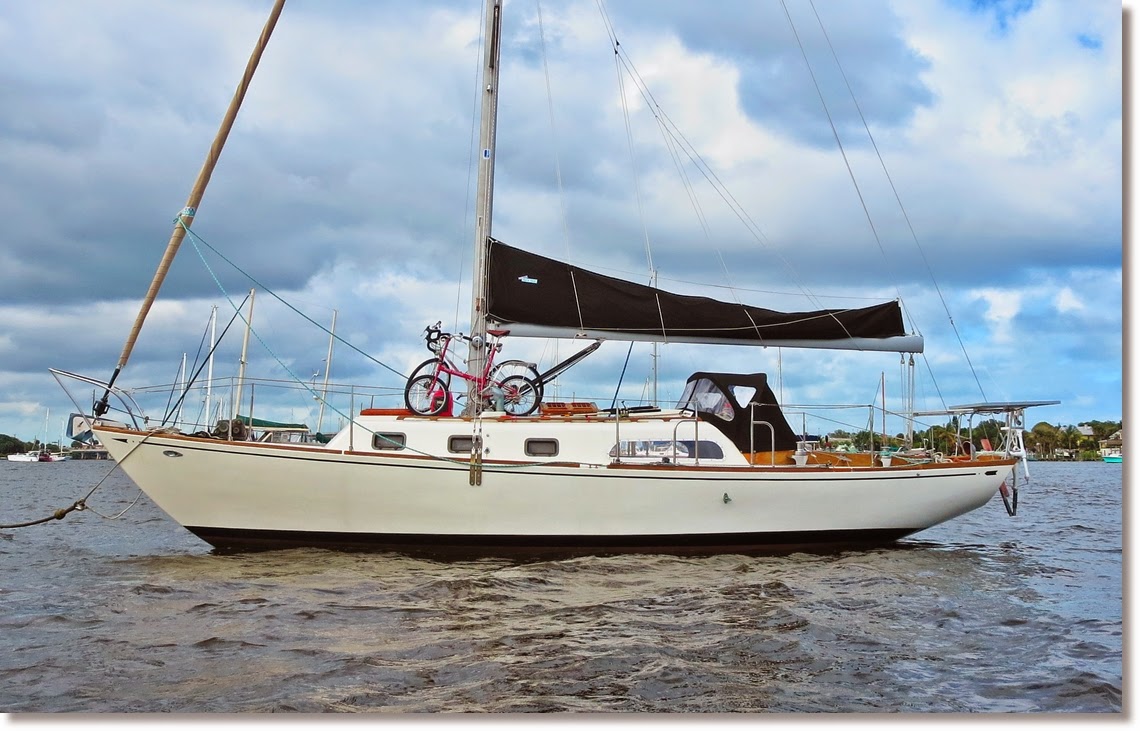 In the final week on the dock we made a table, installed a counter over the hole-that-used-to-be-an-icebox, and finally mounted the bathroom door - which has a full-length mirror!.  I haven't seen myself in a full length mirror in two years.  It's pretty wild.  I look older(wiser?)  Aside from those few projects, the majority of last week was spent organizing every object in our lives into logical storage solutions on the boat. Tools, parts and spares had to be extracted from the left overs of the refit, the "everything else" that ended up being sold, given away, or donated to the dumpster.

When we had nothing but home goods and tools on board, I was really excited that we had so much room to spare.  We couldn't even utilize all of our storage space!  But then came the parts for all the little projects that we still need to do or finish.  That's when packing got tight.  The starboard side of the cabin is loaded down with spare crap, but over the next week those projects will get done and we can unload and simplify a bit more.  Throughout this refit I fantasized about moving just a few bags onto a clean, finished boat in a methodical and organized fashion.  It was a nice fantasy that kept me going, but the reality, while a bit messier, is still better than a fantasy.  I am much happier that we are finally on the move, and the sort of work that is left can be done as we go.

I almost forgot to mention that I broke my pinkie toe.  The cockpit locker lid fell on it Saturday, the day we paid up and were supposed to get off the dock.  Due to the break, we missed the high noon tide and had to leave Sunday instead.  I buddy-taped the broken toe to the one next to it, and am now trying to stay off of it, but it is difficult to sit down and stay put with so much to do!  Fortunately this is the least debilitating of all the injuries I've sustained thus far.  There's nothing to do motoring down the ICW that can't be done with a broken toe!

But just being back on the water for a couple day has started to heal our frustrations.  Sleeping by the sway of floating over gentle swells and being wakened by the sunrise has a healing power all it's own.  Seeing our boat on the water after all this time is unreal.  It looks so beautiful I can't even believe it.  I don't know how we survived it.  I don't know how it didn't break us apart.  But it feels really good that it didn't.  We didn't give up, or even allow giving up to be an option in our thinking.  We made finishing this boat our sole mission of existing.  And we won.

Tomorrow we start heading south! We're entering the I-don't-know-when-I'll-have-internet-access-again phase, so I don't know when the next post will be, but I will Tweet and Facebook updates from the phone as we go!

Email ThisBlogThis!Share to TwitterShare to FacebookShare to Pinterest
Labels: Boat Life, Interior, living aboard a sailboat