Our long sail from New Providence Island back to Florida was cut short when we had to stop at Chub Cay in the Berries to wait out the storms.  Weather at this time of year is spotty, and at this location on earth, doubly so.


The stretch of water between Chub Cay and Nassau is a few thousand feet deep, and then, in the stretch of a few hundred yards climbs to the Bahama banks at about 10-12 feet deep.  70-100 miles west of the Berries and Andros is the next multi-thousand-foot deep trench: the Gulf stream. 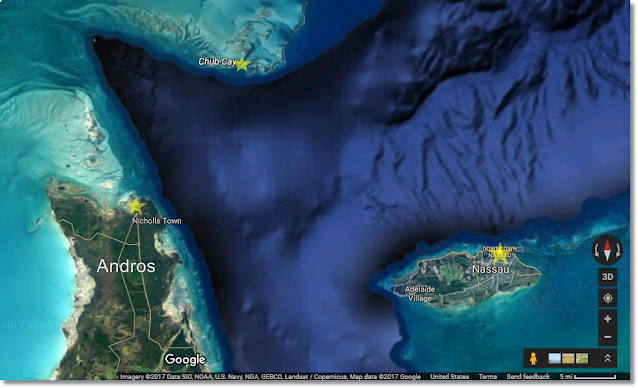 During slack tide, water sits on the shallow shelf and heats up in the sun while other waters hide in the deep trench, getting quite cold.  When the tide changes, either warm water "spills" off of the shelf into the cold deep or cold water is forced out of the deep, vertically up the wall to the warm shallows where it creates rapid thunderheads.

The day after being rerouted to Chub Cay by storms, we made our second attempt at the Northwest Passage. It was a lovely, mostly sunny day with a very favorable 15 knot south wind that had us on a gentle reach under full sail to the channel, no need to run the little diesel.  It was so nice that with an hour left to the channel, I popped down below to fix some lunch.  While Sarah and I were eating, Robin suddenly lurched hard on-ear, almost putting a rail in the water while turning nearly 90 degrees from east to north.  I jumped on deck to see what had happened expecting we had snagged a crab pot or one of my sheets or steering lines had frayed, but instead we were in the middle of 50 knots of wind from the west, and a small black spot cloud had formed in the otherwise sunny sky.  Our Aries self-steering wind vane steers according to the wind direction, so when Mother Nature decided to change 90 degrees almost instantly, the Aries did too.

This is the moment for jiffy reefing.  If you don't have jiffy reefs rigged, then my advice is: don't go out sailing until you do.  I have each reef on a single line that cinches both tack and clew to pull the whole slab reef out of the mainsail at once.  It runs to a cleat and winch set up on my coachroof in the cockpit.  Under 50 knots of wind and without changing point of sail, I was able to reef the mainsail, with one line, from the cockpit, by myself, while the self-steering wind vane kept course.  I pulled the foresail in completely and had the mainsail all the way down to the third reef in about a minute.  Then I took the helm and turned 180 degrees, directly south to get away from the rocky breakers,  But even with a tiny triangle of sail on the mast, our Yanmar diesel was struggling to maintain any headway against the building swells.  The wind built the waves from a slow one foot swell to 6 footers pounding over the deck within about 10 minutes.  The engine overheated almost immediately.  I throttled it down and waited/hoped for the overheat to stop, because I wasn't about to shut it off.  But with no underwater propulsion, we were forced to do what the wind told us.  At that point, the only answer was downwind, fast.

Luckily "downwind fast" was directly back to Chub Cay.  Unluckily, we still had some sail in the air, the wind and waves were still building, the engine buzzer was screaming and flashing overheat, and we still had an hour and a half back to Chub.
The next ???? minutes are kind of a blur of me gripping the tiller as hard as I could while we surfed 10-foot waves that were so steep we were beginning to plow the bow of the boat into the trough while we were surfing the crests.  Even with that tiny triangle of sail, we were making over 10 knots dead downwind, and I thought we were close to pitchpoling.  Our windspeed indicator pegs out at 65 knots, and it was pegged for long periods.  Moving 10 knots downwind plus 65+ knots indicated apparent wind speed = 75+ knots actual wind speed.  The stitches on the end of our flag and the top and bottom buttons of my shirt got ripped out by the wind.  I could barely hear Sarah unless her yelling was directly in my ear.  It wasn't raining yet, but the wind was whipping up so much seawater that it stung when it hit you, which was somehow everywhere on your body at once.  I have no idea how long this lasted, probably less than 5 minutes, but it was enough time to give Sarah a warning that we may be living our final moments, and that I loved her very much.  She was pretty okay with that being the end of it.  I was impressed.

About ???? minutes later, the worst of it had passed, we could start to see a clear sky ahead of us again, and while we were still in 6-foot waves, the period had slowed down significantly, and the wind had "eased" back to a steady-ish 45 knots like when it all started.  Clouds were now dumping freshwater rather than wind-blowing seawater.  A more seasoned seaman would consider this a great day to make some distance.

The sail to Andros went well enough.  It was a pleasant day that turned a bit sour near the end with a light squall, but nothing dangerous. The holding isn't great in North Andros, and the best of it, on the eastern side of the bay was taken up by four other boats with similar plans.  So we took the less-preferable western side. The sand is very shallow on the rock bottom there, so I had to dive and dig both our anchors into the best sand pockets I could find on the seafloor, and we rode out another night of deep swells. 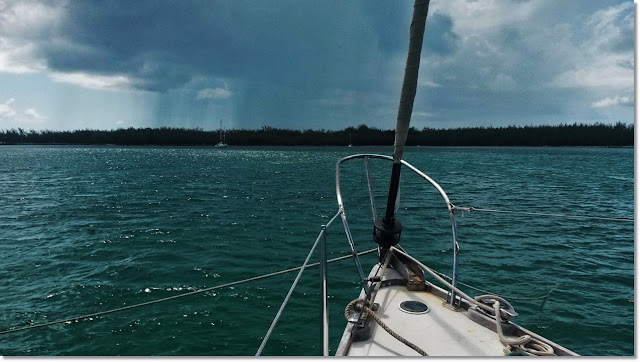 It took another day for the storms to finally clear enough for us to take a trip ashore, but in the meantime, the stormy weather made for spectacular sunsets. 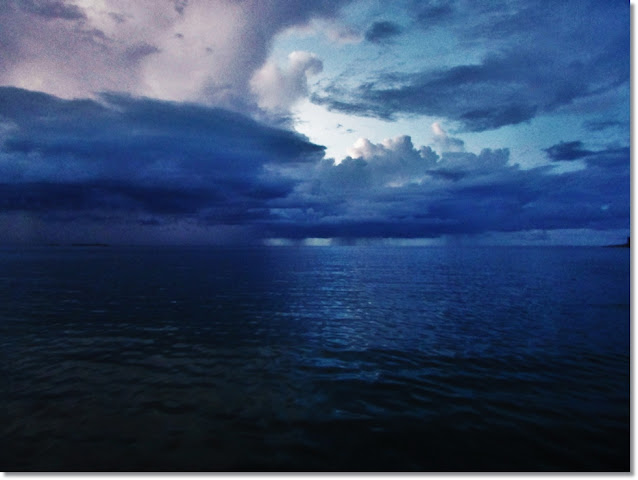 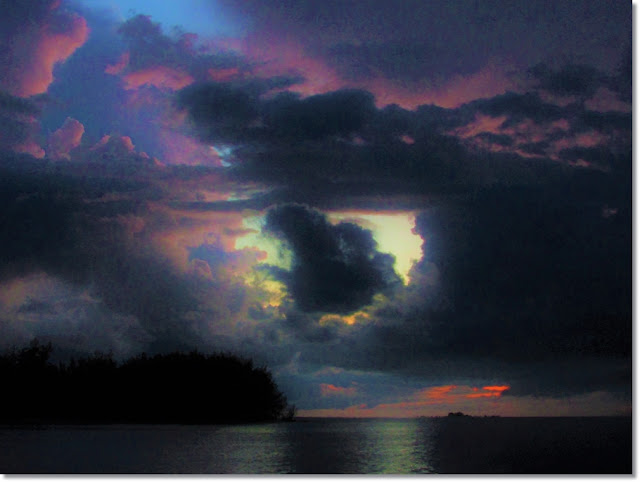