The Southern Berries is where I began to feel truly comfortable with the boat.  In just the few weeks since leaving Stuart Robin had been actively motoring and sailing. There are maneuvers like heavy weather gybing, docking, anchoring, entering narrow/shallow channels with a following current, etc, that I needed to experience before I could let myself ease into the boat, comfortable in the knowledge of how it would behave.  We had already checked off everything on the shortlist above, and many others.  Aside from constantly concerning myself over maneuvering, common tasks like navigation, radio watch, watching/listening to every piece of rigging/hardware for signs of failure, and general worrying of impending disaster take up most of my thought time when sailing.  On the cruise to the southern berries, that anxiety finally began to subside and I could finally enjoy the sound of the water on the hull and the waving palms on passing islands, getting lost instead in the world around me.

The sea state was a very strong chop, and we had to tack a couple times to round Great Harbor Cay. But even beating in the steep seas, we were able to heave to while we reeled in a very healthy Permit in about 40 feet of water near the edge of the Great Harbor shelf. 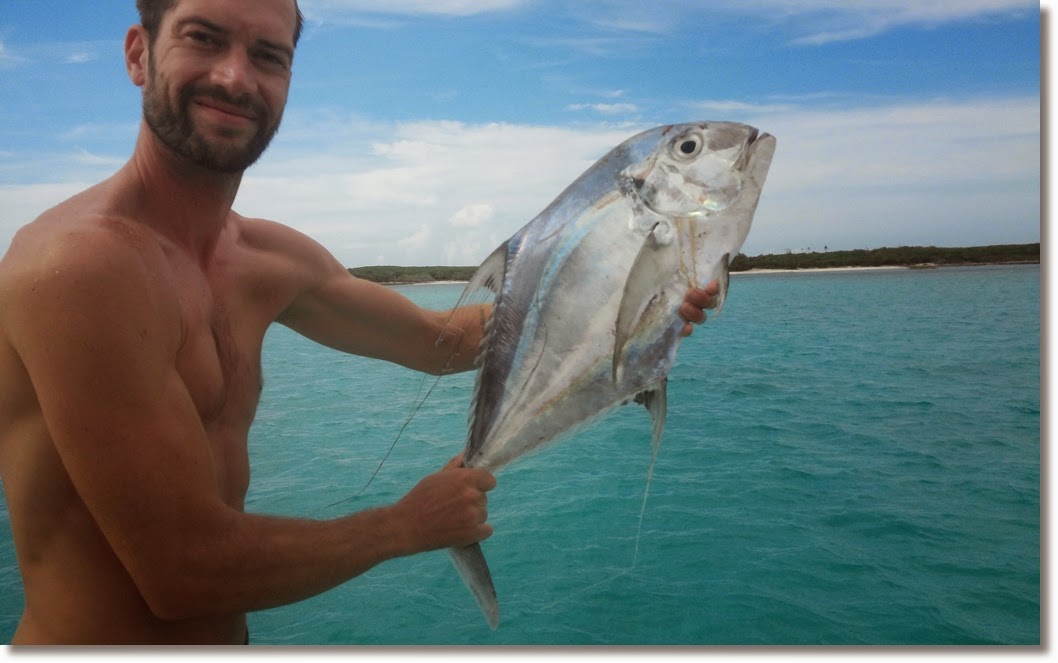 Almost immediately after catching, killing (it was a bleeder!), and photographing the Permit, we snagged a small Jack Crevalle that we decided to make into a quick lunch before turning the Permit into fillets.  Clint scaled and gutted the Jack, and I scored it with a knife, curried and pan fried it whole in coconut oil until the skin was crispy and the meat began to flake, then squeezed our last fresh lemon on top... 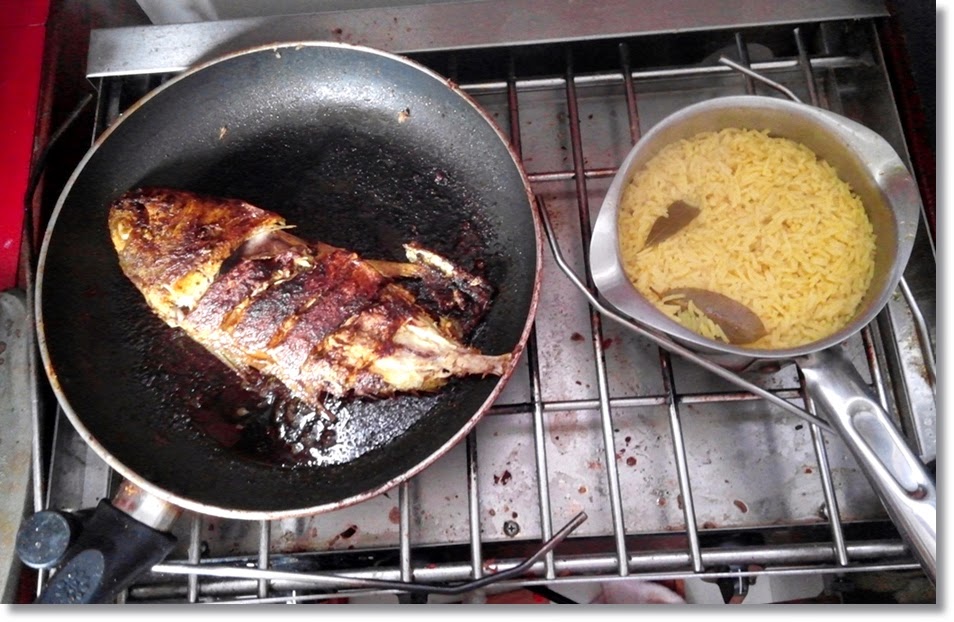 Shortly after lunch we rounded Shelling Beach on the south east tip of Great Harbor Cay, we were able to fall off the wind to the south a few more degrees and take our final tack towards that evening destination: Flo's Conch Bar, a single family settlement on the protected southwest shore of Little Harbor Cay.  They apparently welcome and cook for visitors, but you have to notify them of your arrival by radio at least a couple hours in advance.

We rounded the southern tip of Little Harbor Cay to find there was a relatively narrow channel entrance into western harbor with waves crashing on barely submerged breakers to the south, and a strong following current.  But we weren't phased and neither was Robin, easing gracefully from the steep seas to the smooth shallows and dropping anchor just in time from some evening exploring on the small islets surrounding Flo's Conch Bar before a new thunderhead rolled in. 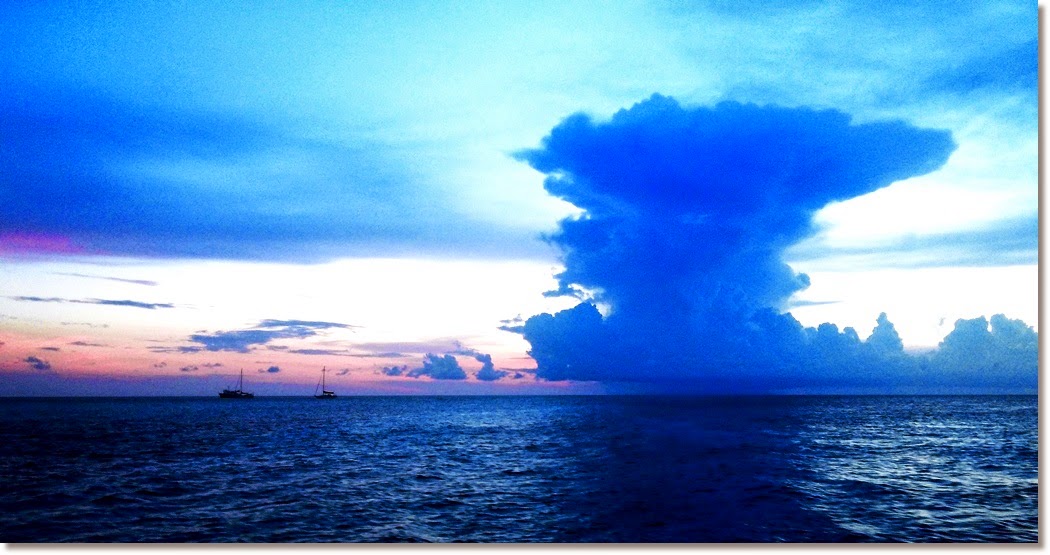 The Permit was butchered for the first night's dinner.  Truly amazing fish.  Permit is the now the tastiest fish I have never eaten.  Firm, sweet, and flavorful as a shellfish when raw.  Flaky, sweet and buttery when cooked all on its own.  It served for about three meals before we had to toss the last couple fillets because they were getting mushy (no refrigeration, remember).

Playing with my food.

The next day we rounded the southern tip of the Berry Islands to stop at Chub Cay in order to stage for our next leg to Nassau.  Fuel and the usual marina services are offered at the small and rather expensive Chub Cay Marina.  It is a private island, and a semi-private marina that caters to members but services the public for extra revenue.  Although the ship store had very little to offer, fuel was 50% overpriced, food/drinks at the bar were expensive and terrible, the wifi was slow, the laundry machines were broken and rusted out, and the whole property infested with mosquitoes. There was a however a lovely beach, a decent anchorage, and a lot of money being dumped into the property...  it looks like it may be a nice place in the future.

With a couple days to wait for a weather window to set sail for Nassau, and only terrible, expensive food available, Clint and I were happy to have the Conch and Permit.  Two of our three conch made up our first morning's breakfast, just had to get them out of the shell first.  I had read how to do it, and it was exactly as I had read: punch a hole with a hammer and awl just above the second row in the crown of spikes, and you will see the conch's strong arm thingy wrapped around the center flute inside.  Sever it and pull the conch out.  I had not yet read about tenderizing and skinning the conch yet, so the final conch ciabatta sandwiches were a bit tough and chewy, but still tasty. 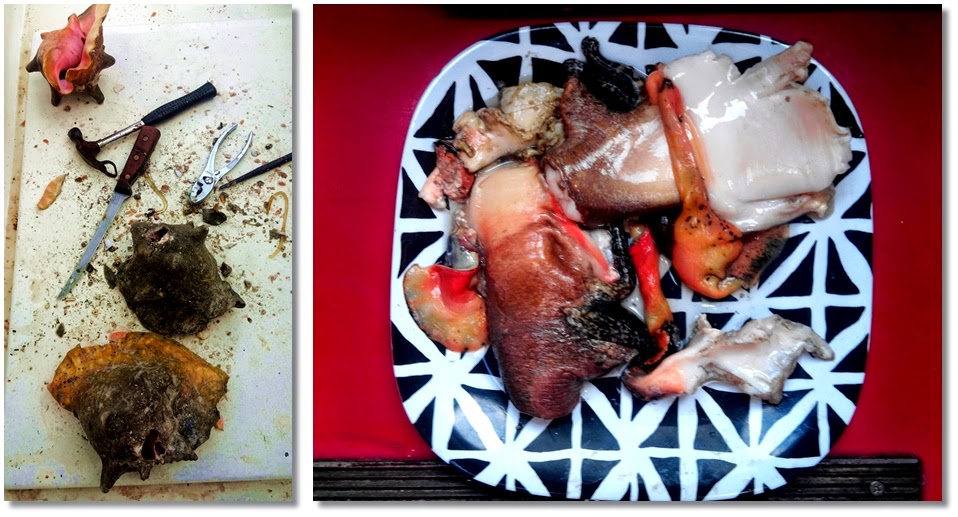 After three days of wind on the nose, we decided to just motor to Nassau.  The day before our departure, I swam to the beach to snap a shot of Robin on anchor at Chub Cay.
(Beach is off limits to non members?!?  *LOL*) 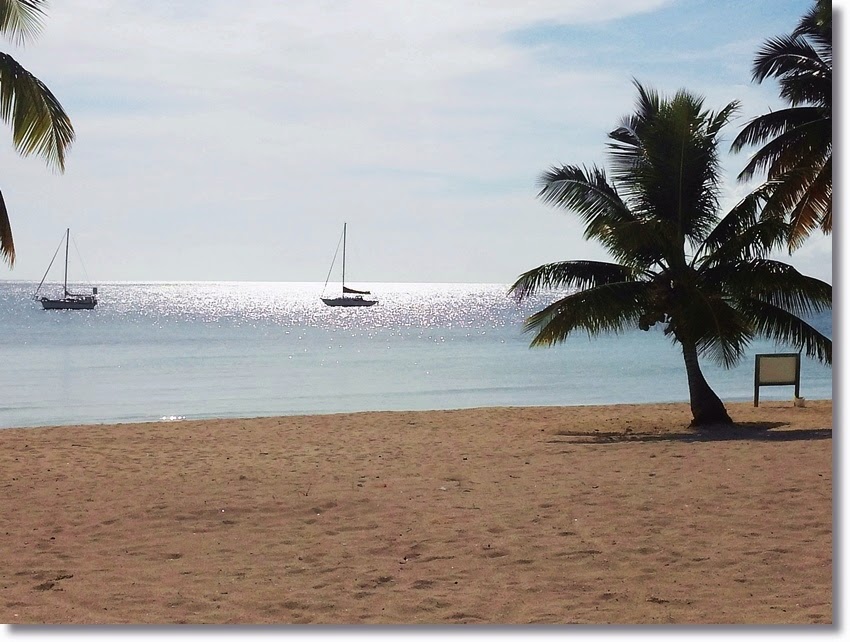