After a few days of sailing around the Berries, we were in position to launch towards our week (two weeks?) in Nassau on New Providence island.  Unlike the flats where we had been sailing, that particular stretch of water is a deep ocean ravine running through the center of the Bahamas.  The deeper water, fueled by strong tidal currents from the flats, can be treacherous.  Luckily we were greeted on departure morning by a calm day.  10 knots of wind right on the nose, but a long period predictable ocean-like swell, resulting in a slow, comfortable pitching motion as we motored from Chub Cay straight to windward to Nassau.  We hoped to catch a Mahi, Wahoo, or Tuna in the deep blue water, but came up short.  Probably for the best since we figured that evening's meal would likely be had at a bar (it was).

Since Nassau is such a large port with large cruiseships operating inside the protected harbor, we made the wise and guidebook advised call to harbor control to request entrance.  We arrived just before three of the four ships were headed out, and dropped anchor in a legal, marked anchorage just southwest of the cruiseship docks.  After our polite arrival, local authorities were regularly notified of our presence by the cruiseship captains who did not like the anchorage location, and harbor control came out to ask us to move almost every morning, and every morning I would dodge the request. 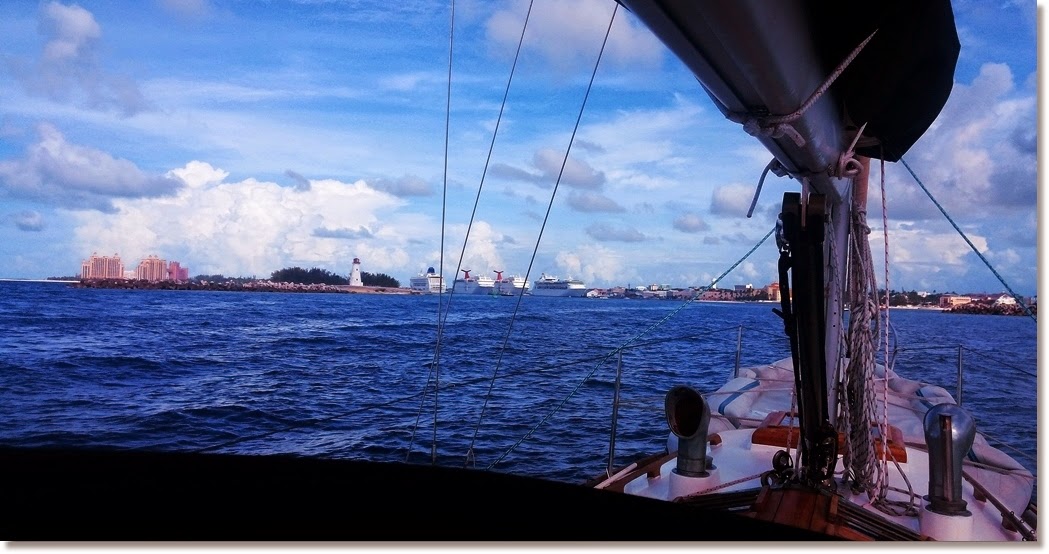 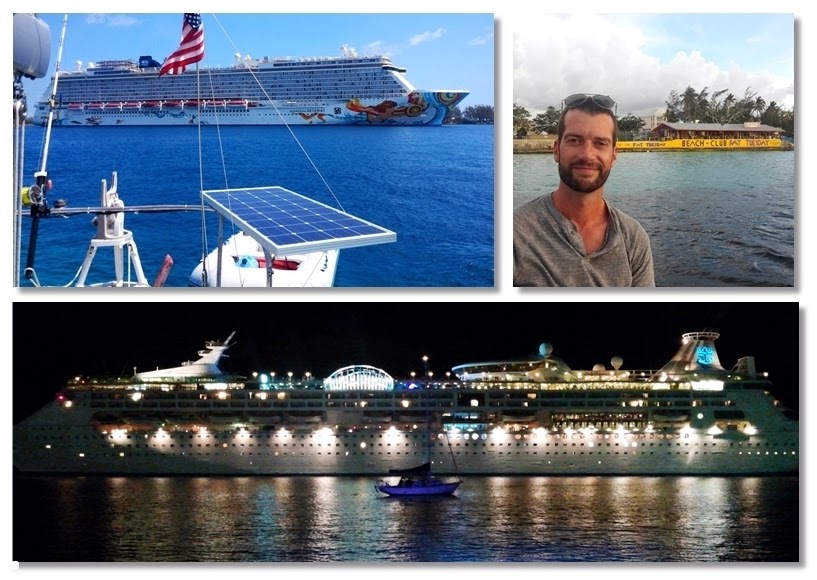 It was a noisy anchorage close to the nightlife, and I can see how the location seemed annoying to the cruiseship captains, but we were anchored in the soft sand at 10" depth.  Even at the backside of our anchor swing circle at low tide, we wouldn't go over the edge of the drop off to the 35+ foot deep turning basin.  We functioned perfectly as a marker bouy for the edge of their allowable turning radius!  Complaints??  We should have gotten thank you letters...

Our first evening we tied up to the bar directly adjacent to the anchorage, Fat Tuesday's, had a couple drinks, and headed inland to find a local bar that served a decent meal.  After more drinks and a hefty meal of land-based animal stuffs unavailable to us on the refrigerator-less boat, we headed back to Fat Tuesday's for another drink, but found the place was reserved and packed with a raging high school senior graduation party.  We walked in anyway, but a rather drunk senior picked us out for early 30's almost immediately.  Some local Bahamian ladies also crashed the party before the staff had us kicked out as pervs.  They were there to celebrate a birthday party, and were happy to find some American studs closer to their age to liven up the night...  More drinks, some dancing, shared fascination with kids' capability to act insane/stupid/dangerous, and eventually the night came to a close.

Against internet chatroom advice, we tied our dinghy, with no lock, against the downtown city docks while we roamed the city all day.  A few local dock bum kids tried to extort us for protection money to watch the boat while they were gone.  I told them that they could get a tip if the dinghy was still there when we returned, plus that I had memorized their names and face, so I would know who to report to the police as a prime suspect if it was missing when I came back.  When we got back to the dinghy, it was unmolested, though unattended.  The same kids tried to hit us up for tips the next morning for the previous day's "protection"!   I laughed at them and told them that they weren't even present when we had returned to the dinghy, so obviously they weren't doing their job.  Silly kids.
Our dinghy was tied to the municipal dock at all hours of the day and night throughout our visit, and we never had a problem.  Thank You Bahamas!

Clint and I walked around the hills of Nassau, visiting the government buildings and eventually taking a tour of the rum distillery and estate on the hill: John Watling's distillery.

The Houses of Parliament. 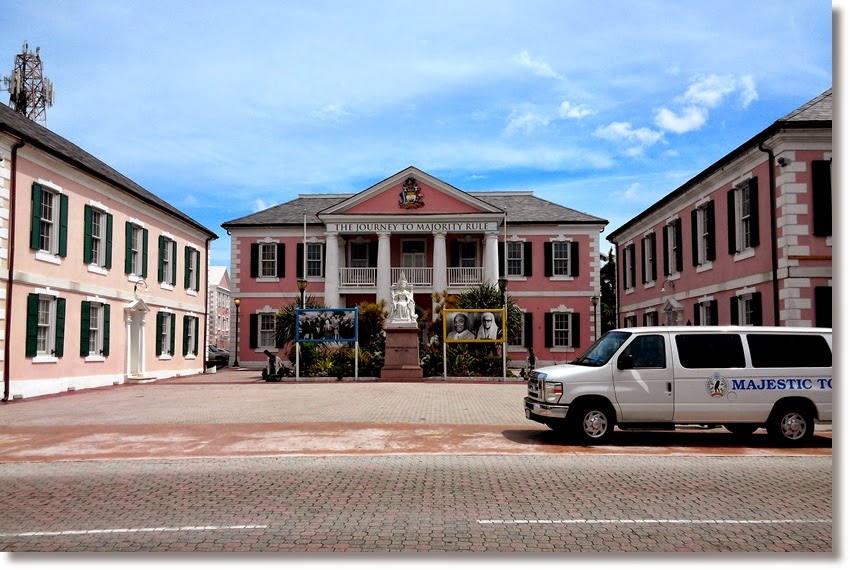 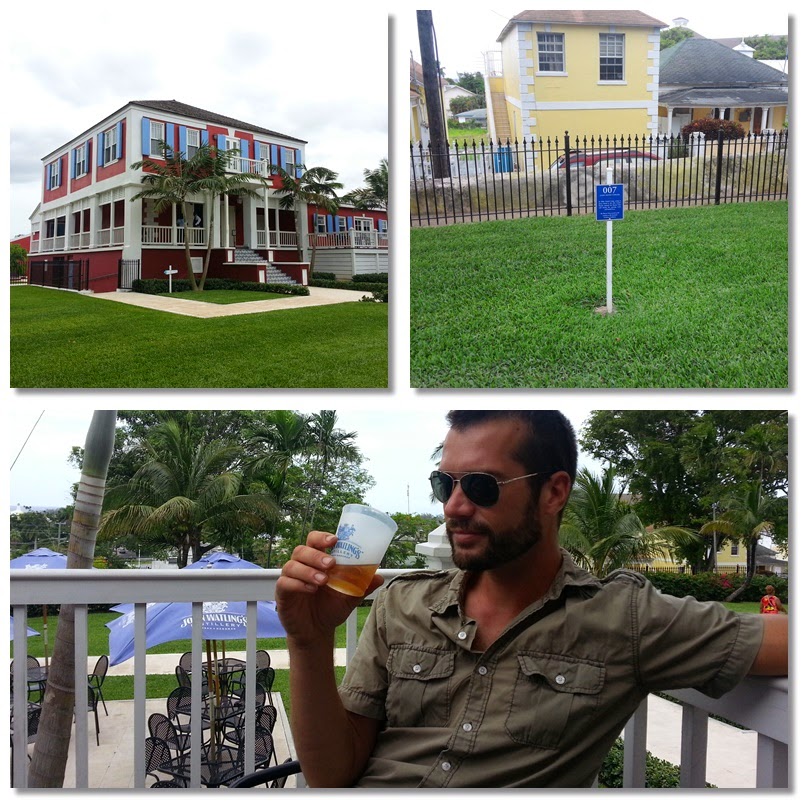 Did I order a double of their finest on the rocks?  Yes I did.  Was I drunk, hot, and sweaty the rest of the day?  Yes I was.  Proper rum Mr Watling! (although served in a highly improper cup).
In the upper right picture you can see the lawn sign marking another claim to fame on the Watling Rum estate: the location that 007 Daniel Craig jumped the fence down to the street in a scene from Casino Royale.

Couldn't pass up this piece down the street from the distillery. 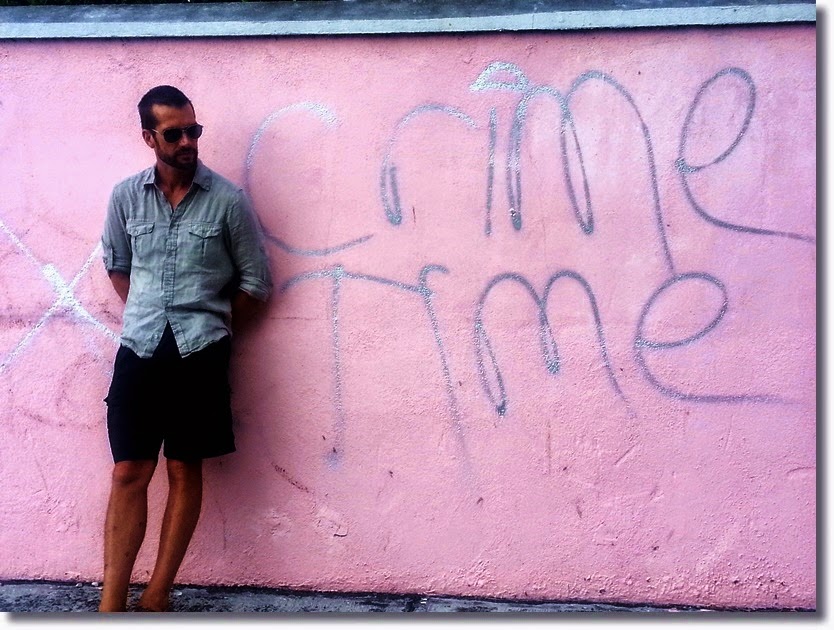 We had one Conch left, and Clint treated it right this time, properly skinning it and pounding it out flat, schnitzel-style before breading and flash frying.  It was the best conch we had eaten in the islands yet...  pity I didn't grab a picture.

In later days in Nassau we made it down past the west end of the harbor to the fish fry area.  It was packed with tourists during the cruiseship days, but at night it was all locals, downing beers, fried fish, and raw, fresh conch salad, so we did the same thing.  The hat?  Junkanoo.  Crazy Bahamian thing, and way out of season.  Had to try on this fish shop's Junkanoo Conquistador hat.  Just go with it. 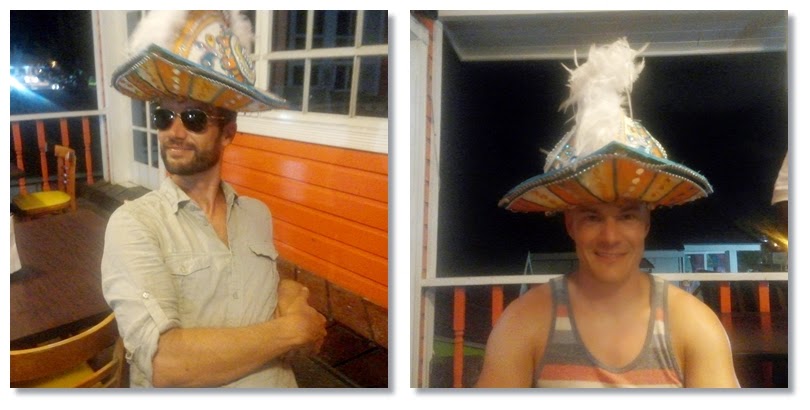 Near the end of our time in Nassau I took a walk east across the harbor to pursue a hobby of mine, spotting custom built racing boats.  I had read online that there were a few rare boats in town of the highest caliber: America's Cup racers NZL-12 and NZL-10, both Kiwi-built first generation IACC rule era boats, and I was lucky enough to find a third Kiwi IAAC rule boat that I couldn't identify.

The IACC rule era (1992-2007) followed the 12 meter rule era after New Zealand issued an unwelcome Deed-of-Gift challenge to then-cup-defender San Diego Yacht Club in 1988, just one year after the last 12 meter America's cup race in 1987, bringing an end to the 12 meter era.  Deed-of-Gift boats are built to the 90' waterline length spec in the original cup charter, and 1988's Deed-of-Gift challenge resulted in the massive carbon/kevlar Kiwi boat KZ1, aka "The Big Boat", the holy grail of monohull racer spotting.  IACC rules of the 90's and 2000's eventually gave way to the modern AC 72 multihull rule (2013-present) when, in 2010 another Deed of Gift challenge was issued BY the San Diego Yacht Club to then-cup-defender Swiss Société Nautique de Genève (SNG) resulting in the amazing USA-17, the holy grail of multihull racer spotting....  You do keep up with the most significant and longest enduring sports trophy in human history, right?

The flock of Kiwi racers laying low.
These boats are for charter (wish I could have) here:
http://www.sailnassau.com/

I also managed to spot a lovely lone Bahamian-style wooden sloop racer bobbing in the anchorage where the harbor master wanted us to anchor.  These Bahamian-class racers feature all wooden spars and obscenely long booms twice the length of the cockpit, and are manhandled by a pair of crazy Bahamian sailors 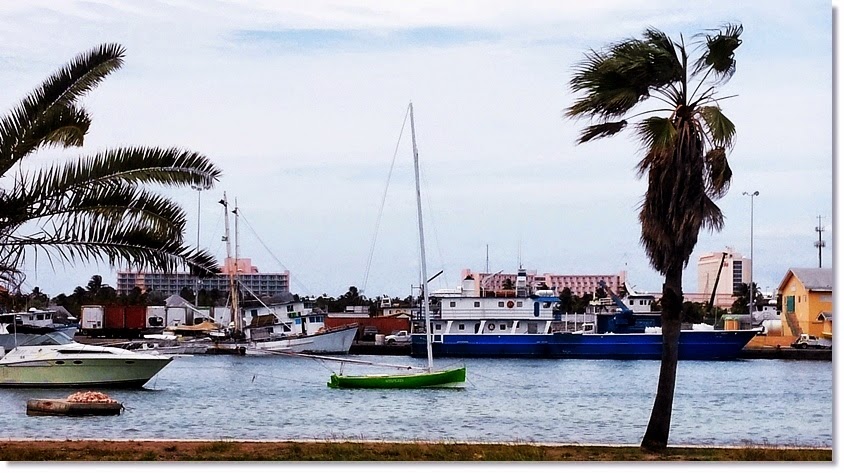 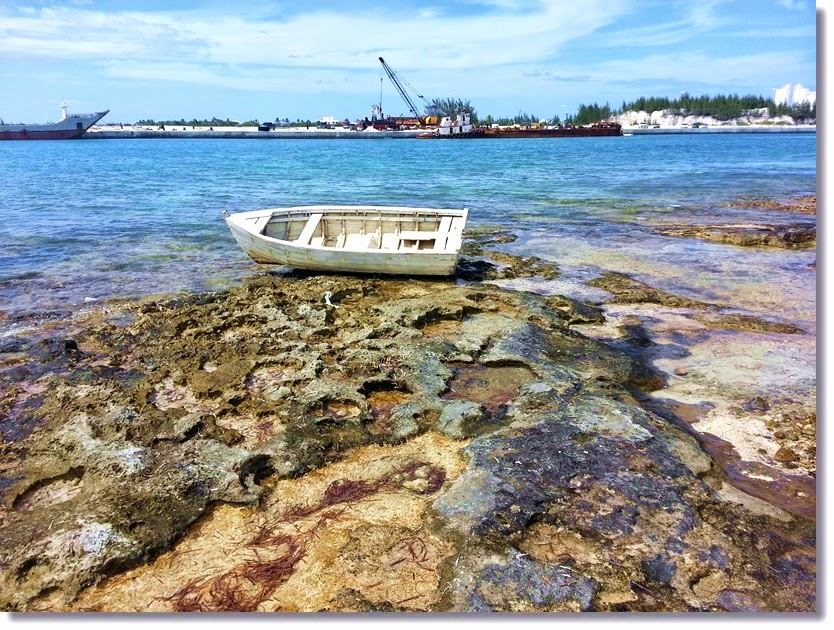 I have no idea when/where I took this, (indicative of our time in Nassau?) but based on the date/time stamp it happened sometime when we were here, so I figured now would be a good time in the post to insert it...

Though we wanted to sail onward, hurricane season was fast upon us, and it was time to head home. Instead of sailing all the way from Nassau to Andros we took a few hours sail to the west end of New Providence island and harbored up in an amazing protected anchorage in West Bay, shortening our trip back across the deep trench of water between the two.  West Bay was crystal clear and just the right depth for diving and snorkeling.  It was also literally crawling with giant Bahamian sea stars! We spent the rest of the day and evening diving, finding numerous sea star color variations, and even spotted a six legged star! 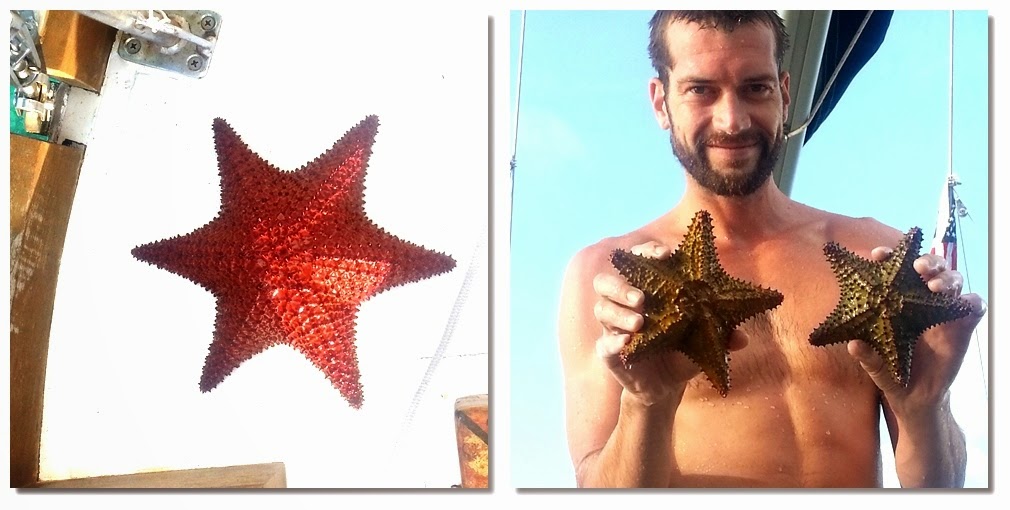 ... must be tough being the only Jewish kid in the bay...

We only spent one night on anchor in West Bay before we left for Andros, but I bet I'll stay longer the next time we return.
Posted by Andrew Lea at 8:29 PM