Tales Of A Salty Sailor

We had been on the boat for almost a month and made no progress with the engine. As I previously left off, we were trying to get the bell housing and transmission off of it but nothing was working. We didn't know how to proceed. It was at this time that we met the person responsible for the next step in the engine project. But his contribution to the engine problem is a very dull way to introduce him.

It was the off-season at the marina and the only remaining occupants were the few friendly retirees who lived there year-round. Some cruised the Caribbean or the Bahamas seasonally. Others never raised sail or went anywhere; they simply lived happily on their boats and took great pleasure in thinking about it. We were the only young people there, save Jay our Canadian neighbor, who had been raised aboard. I was surprised to find out that there were few real travelers at the marina... No salty sailors with tales of the seven seas.

That is until Lee arrived. We came to the marina one morning and there was a new couple sitting outside the Marina shop. The man looked to be in his late 50s, with a pulled-back tussle of greyish-blonde hair and the physique of a serious athlete. He had kind, whimsical eyes that conveyed the satisfaction and serenity of having left no passion unpursued. His wife had a petite angelic face, with a pale complexion and neat blond hair. She had the most darling voice I'd ever heard, and it made you want to listen. They both spoke with accents, but very different accents. AJ decided to go over and talked to them.

He was Lee from South Africa and his wife was German. After telling him our plans he told us of his first passage to Madagascar in 1969 when he was 17. In Durban he met another teenager, who was at the time, setting the record to be the youngest person to ever solo circumnavigate, Robin Lee Graham. AJ read the original National Geographic multi-issue coverage of Robin's voyage (in vintage issues kept by his father) when he was a kid. The story had played a part in his inspiration to sail. Robin Lee Graham was even the inspiration for naming our own boat "Robin", as it was built in that same year (1969), and designed by the same designer (Bill Luders) as Robin Lee Graham's boat "Dove".  Lee told us stories of Robin Graham getting into trouble trying to get a drink at the Durban yacht club because he was underage. The kid was doing what few men have done and after years of voyaging and weeks alone at sea, he was denied a beer. A fact he did not take kindly to, which lead to brawls and getting thrown out on the street. We could not believe we were meeting someone at a random marina in Florida who had met Robin while sailing himself in '69. But as more stories unfolded, having met Robin faded into the background, as it was certainly his least exciting tale, and smallest claim to fame.

I noticed Lee was not all that chatty around the marina, but he took a shine to AJ. Lee had quite a competitive nature and his banter with AJ was amusing to watch. He always had a backhanded way of sliding little jibes into their conversation, implying that AJ was lazy and would never sail away. It was the kind of ribbing AJ enjoys, and it actually gave him a much-needed boost in motivation to tackle the problems of the day, the hot sticky day.

Lee was re-rigging his boat for the Antigua Classics Regatta race, where he had taken 3rd place last year. He said to us many times in varying ways that the winner is remembered, second place was occasionally remembered as the guy the winner beat, and third-place never existed at all. Second and third place holders were the losers. A third-place trophy was only a bitter reminder of inferiority. Therefore, he was re-rigging with Dyneema, getting all new Kevlar sales made, and standing a new mast before going to the Bahama's, then off to conquer Antigua. He had planned to sell the sails he was taking down but decided to give them to us instead. Two main sales and stay sale. They were in perfect condition. We were shocked. And terribly grateful.

One day AJ came home from a day of running around to machinists and mechanics with Lee and said, "Lee is Lee McGregor, the Lee McGregor. He had overheard Lee's last name and put it together. The name meant nothing to me, but AJ had read about him in magazines. Lee McGregor is a World Champion in rowing, swimming, and kayaking. He was never allowed to compete in the Olympics for his home nation of South Africa because of Apartheid, so he won everything else. He won the Finlandia Vodka Clean Water Challenge, a 30-day, 765-mile endurance kayak race from Chicago to New York City. Competitors paddle portions of the Great Lakes, eight rivers, the Erie Canal and the Atlantic Ocean. He was there to beat Olympic Gold medalist Greg Barton. And he did. I learned this from Googling him. And apparently, when he was not competing against the world's best, he was sailing around the world in his own vintage yacht.

One evening they invited us out to their boat Restless. A 1934 47' gaff-rigged cedar Schooner. The majestic suggestive lines of expert wooden craftsmanship of the 1930's is not something you get to see every day. We had seen his boat sail into the mooring field over our morning coffee and were excited to get a closer look. The hull was painted black.  They had no bimini, leaving the graceful lines of the cockpit and stern unbroken and the night sky in full view. I talked to G about her Atlantic crossings and her favorite places in the Mediterranean and Caribbean. We all sat in the teak and cedar cockpit while Lee told us numerous stories of South Africa, of ocean passages, and of bloody fights defending life and boat. Tales of Brazilian shaman's in the Amazon healing people, of South African witch doctors transferring death omens. He was the adventurer my imagination had conjured up upon seeing him. But the surprise came from his mystical romantic eccentricity. His stories were tales of fate, destiny, soul mates, and guardian angels. This rugged, manliest of men, was a true romantic. His perspective on situations was so zen that you could not help but smile, wonder if he was right, and feel a little better about your problems. Fate caused this disruption in your plans for a reason. Find out what it came to teach you.

The last thing Lee said to us before disappearing into the night was, "Meet me at Joe's Cafe in the Bahamas." Maybe one day we will see him there.

So I guess that brings us back to the engine. The non-working engine with the inaccessible transmission. Lee said we should pull it out of the engine room. The thing weighs upwards of 500 lbs. He said the way to do it is to swing it out on ropes. Lee and AJ engineered the harnesses. They tied one side to the boom and the other to a ladder laid over the entrance hatch. Then they tied a third rope to a ladder laid over the center hatch, then swung it through the kitchen access doors into the cabin. They removed the boom harness and secured it hanging from the two hatches. I was not on the boat for this, but I was told it was dropped twice when the knots gave way. There are now gashes in the teak floor to commemorate it. There was also an oil spill, so the floorboards had to be pulled up and washed. 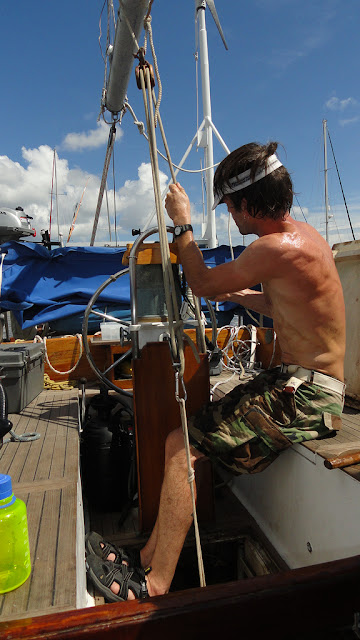 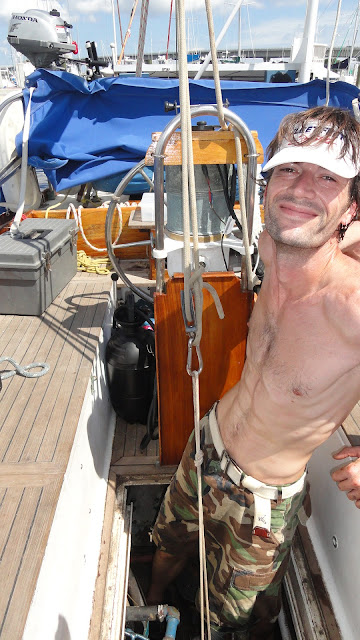 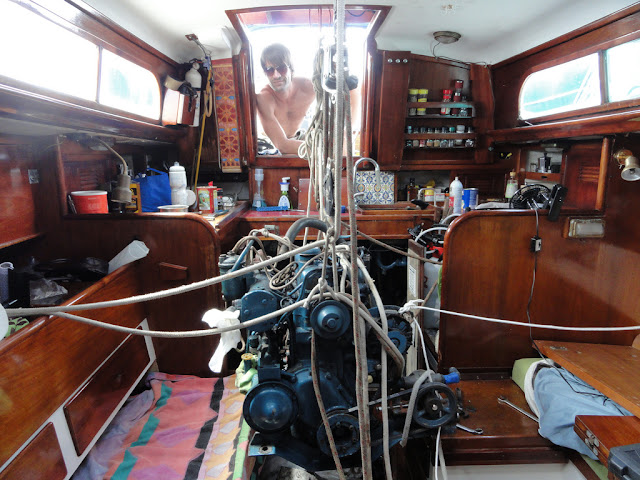 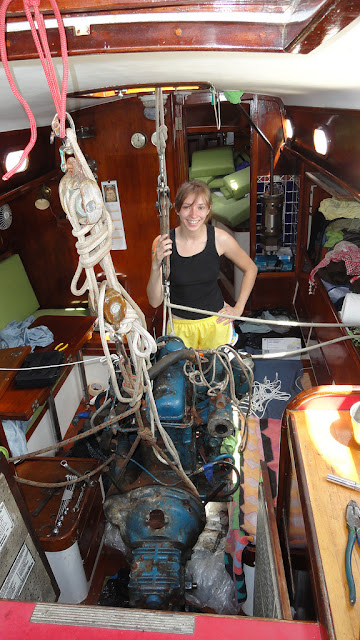 It now hangs right in the entrance of the cabin. The only way to get in was to crouch on the counter, grab the rope for balance, crouch around to the other counter, step down onto the settee, and hop to the floor in the center of the boat. The engine was filthy. Most of the paint was flaking off and it was covered in a thick build-up of grease, grime and rust. You can't so much as brush up against it without ruining your clothes. Removing the engine also disconnected the electricity. We still had not made the mattress for the V berth (why not I really have no idea) and were still sleeping on the settees in the cabin. Now the engine intruded on that space. It also blocked all access to the kitchen. We had run out of water in the tanks a few days earlier and were now jerry-canning it. So with no way to cook, no place to sleep, no electricity or water, and a grimy gigantic engine in the middle of everything, we would have to temporarily move off the boat until one or more of these circumstances was rectified.
Posted by Sarah Lea at 12:04 AM

Email ThisBlogThis!Share to TwitterShare to FacebookShare to Pinterest
Labels: Boat Life, Engine, How it all Began, Refit