We were ready to move aboard. Ready to begin the journey to the sea. It was happening. We were locked in. No home to go to but an old boat sitting in Florida.  It was early September. I have never been a fan of the summertime. The heat affects my mood in very bad ways. Anyone who knows me knows it is futile to invite me out of climate controlled spaces spend time outdoors for any reason in the heat of summer. I would just look at them like they are mad, close the blinds and shrink away into the shadows like a creature of the night protecting itself from the sun.  I knew what was coming.  Living like we were camping in the Florida sun.  But it lay in our path to happiness. So be it. Sometimes the best incentives come from giving yourself no other option.

We arrived and dropped most of our things in storage so we could explore the boat unimpeded and prep to move things on. The previous owners had left tons of spares and hardware stashed all over the place. We went through the compartments and made piles to sort, clean, store or trash. I cut the old icky foam that was in the V berth to make templates to cut our foam mattresses into shape. We had bought them in Germany at Momax - a version of Ikea, and they were the most divine things we'd ever slept on. They were the perfect material to cut into shape.  (We had that in mind when we bought them 3 years earlier.) 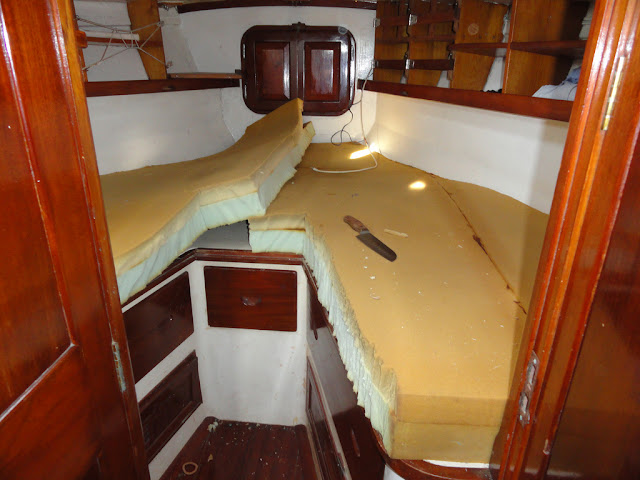 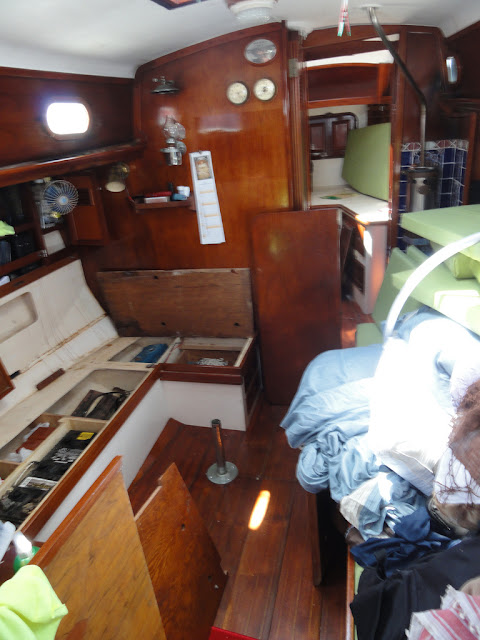 AJ replaced the broken blade on the wind generator to give us some power, but the day he fixed it the wind died. It was dead calm for days. So we had to wait to find out if it worked. And suffer through the windless 95- 100 degree temps.  The humidity made the teak swell so the sliding cabinets and doors were difficult to open.

The heat was intense. It made it difficult to do anything at all, let alone labor intensive projects. You sweat for 24 hours a day. It runs off you like a river while you sleep, soaking whatever you are laying on.  I took to sleeping on a towel, it keeps you drier, and spares the linens.   There was no such thing as being clean. You just got used to living life dirty and hosing yourself down with the garden-sprayer when it got to be too much.  Rain was always a welcome break from the heat and an exhilarating free shower. Free as in it did not require rowing to the docks to fill up the garden-sprayer, rowing back, and lugging it on board.

Then there were the mosquito's and no-see-ums. They ate me alive all night long. Sometimes I tried sleeping in deet, but it's just too disgusting when you are already sweaty and gross. There were mosquito nets for the hatches, but they were old and had tears in them so they were ineffective. Closing the hatches was not an option. You needed every wisp of breeze you could get moving through the cabin. The nets did nothing to prevent no-see-ums anyway. I had never heard of these vicious little bastards before. Too small to see, but leaving clusters of bites that burn and itch far worse than mosquito bites. They bit me all day and devoured me all night.

Within a week I had so many bruises from my ankles to my knees that it was starting to look like one gigantic bruise. Winches, cleats, tight sharp corners, every time I moved I smacked my arm or shoulder or knee or shin or toe or head.  I wondered how long it would be before I would be able to auto-pilot around, gracefully dodging all hazards without care or thought.

It was difficult to stay hydrated in these conditions.  And without refrigeration you don't even get the relief of chilled water. The air was hot, the water you drank was hot. We inevitably had to go to shore in the heat of the afternoons to seek refuge in the Marina's air-conditioned lounge to avoid heat sickness and recharge.

But all the discomfort was just superficial agitation.  At the core we were happy with our new life. Happier than we had been in a long time. We were home. In our home, the first home WE got to choose. Finally, AJ was out of the Army and we were free to make our own fate.

We pressed on and chiseled away at the projects one by one. I could list everything that we need to fix or rebuild on the boat, but it is a list long enough to keep us busy for the next couple years, so I'll just mention the projects as they come.

First things first, gotta have a working toilet.  We have the original solid bronze manual pump head. "Head" is sail speak for toilet.

Everything gets a new name on a boat.  They've got their own secret language.  The kitchen area is the galley, a bed or sleeping bunk is a berth, a couch is a settee, the head is the toilet and the room the toilet is in.

The head had to be rebuilt. Luckily You can still get the rebuild kit for a 1960's bronze Wilcox Ctrittenden.  It's a head that will outlive us all. AJ rebuilt the head itself in the V berth.  We had not made the mattress for it yet and were sleeping on the settee cushions in the cabin. So the V berth became a work table. The head went back together flawlessly but the plumbing was another story. One AJ should probably tell.  We needed hoses and hose fittings in sizes they just didn't make anymore.  The majority of the plumbing had to be done in the most inaccessible places. It looked impossible.  AJ's poor hands and arms were cut to pieces from hose clamp fittings and battling the inaccessible compartments.  But he worked magic and after a week of blood sweat and tears we had a flawlessly working head.   Our home was one step closer to being hospitably habitable.

Here he is day on with the toilet on the V-berth. 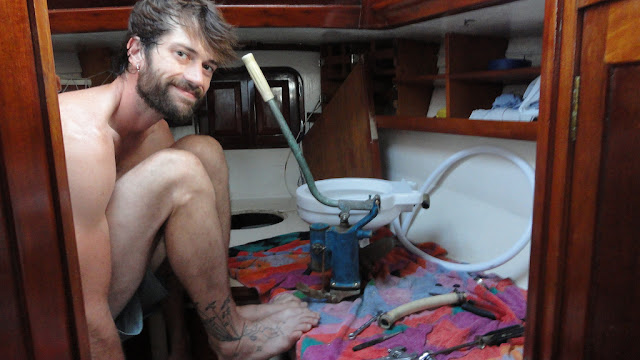 Next order of duty is getting the engine running.  It had not been started while we were back in AR, and water had been leaking through the cockpit onto it in during storms. Now the transmission was shot and it would not start.  Until we can motor out and drop anchor we are stuck paying monthly fee's at the marina for the mooring ball.   Time to tackle the iron behemoth. Our boat also came with the original engine. A 42 horse power 1968 Mercedes diesel.

First the transmission had to be removed. It was only accessible through the hatch in the cockpit floor. The term accessible is a bit of a stretch.  AJ wedged himself in and began loosening the bolts and trying to remove the bell housing.  He pulled on it for days. It would not budge. We got a friend to help they they labored away pulling and prying and dousing it with liquid wrench. It still would not come off. This went on for 3 weeks. Nothing could be done until the transmission was removed.  We could not figure out what was holding it on or how to access it well enough to find out.  It was nearing the end of September and no closer to being mobile.

First day of attempting to remove the bell housing and transmission.  The cockpit won't be clutter free like that again for a long long time.

AJ did not miss an opportunity to take the newly built dinghy out sailing. 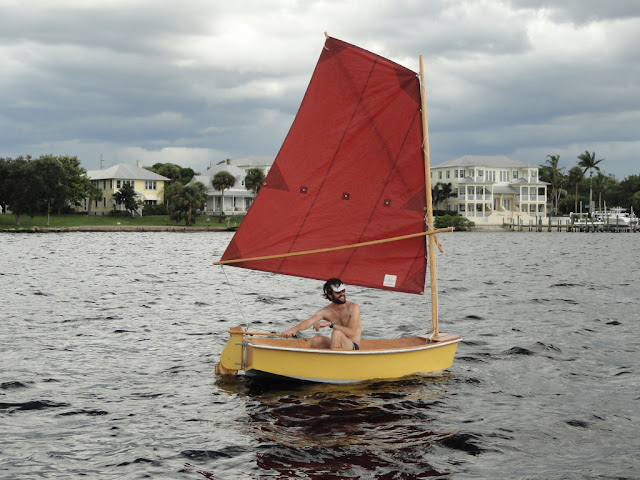 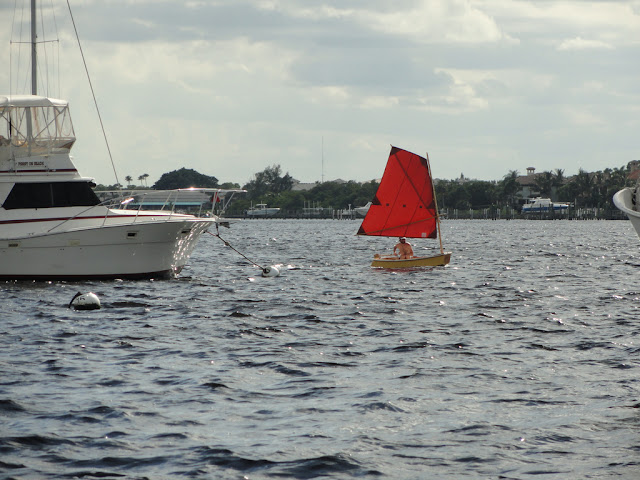 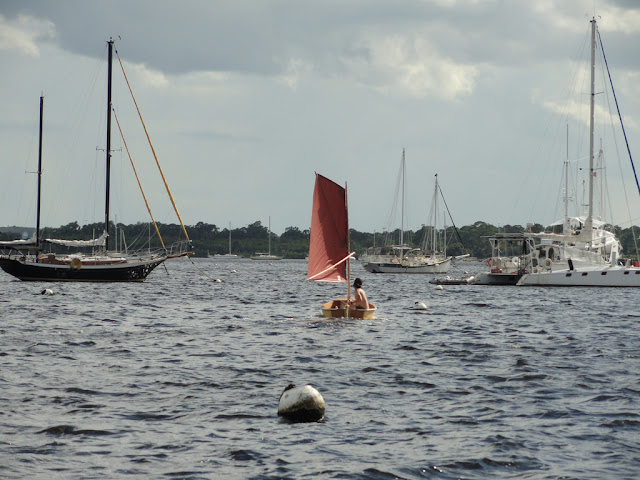 Email ThisBlogThis!Share to TwitterShare to FacebookShare to Pinterest
Labels: Boat Life, How it all Began, Interior, moving aboard