With the gulf stream crossing complete, Clint and I slept in late through the storm to awake to a beautiful cloudy day in Bimini. North Bimini is basically a spit of land, 200 meters wide east-west,and a few miles long north-south. There is a large shallow sand bar/mangrove swamp to the east, and a long narrow channel running between the shallows and the island's east side.  We had anchored for the night just north of Big Game Marina, the last marina in Alicetown, in small and shallow anchorage directly adjacent to a seaplane landing strip.  With the north winds every flight had to take off towards our boat, attaining airspeed just before reaching us, and getting airborne just in time to turn hard left around the mast.  I just had to tell myself that the pilots wanted to avoid a collision more than I did. 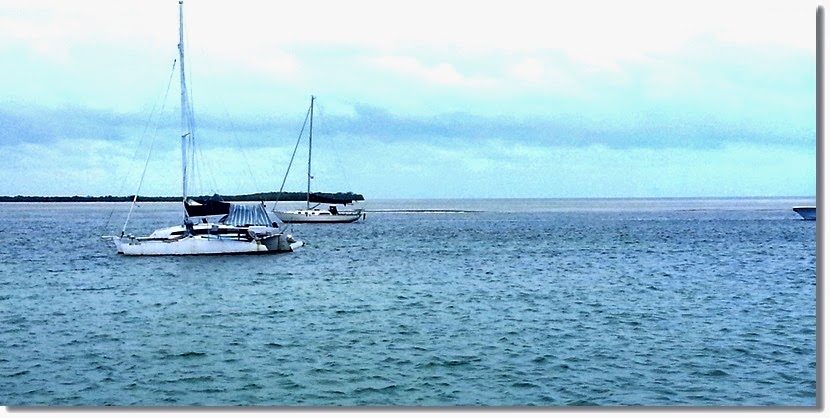 Customs and immigration was easy. We had our stamps and were off to explore Alicetown before lunch.  Alicetown is one of only two towns on the island, made of up a small conglomeration of larger houses and bars on the southern most tip. Just north is Baileytown, where the remainder of the low population number lives.  Despite the single north-south road about 3 miles long, there were an astounding number of cars, and no one but tourists would dream of walking. 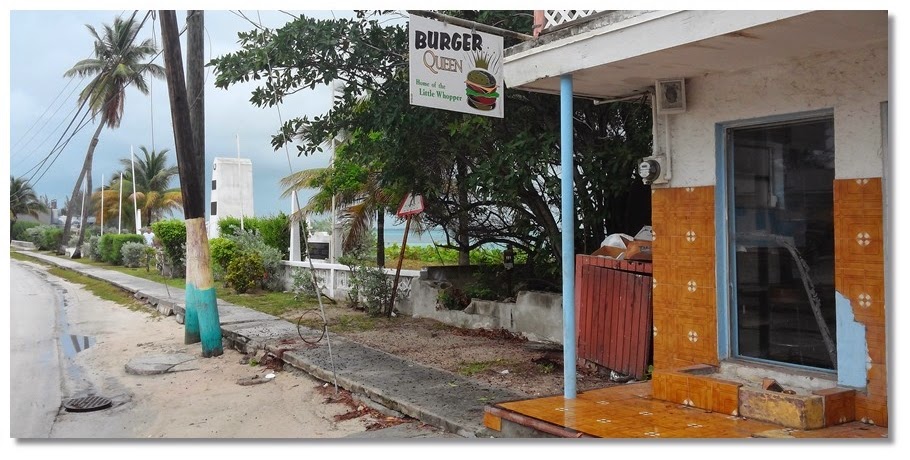 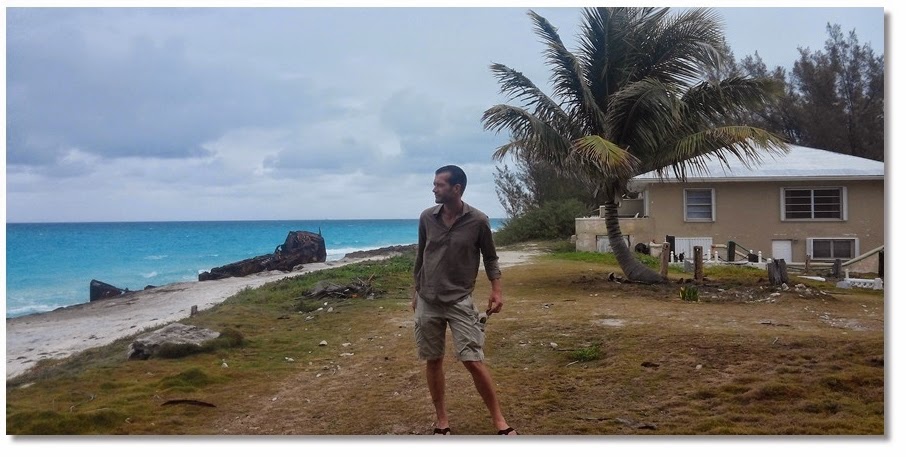 Remains of the Gallant Lady.  It was marked on the nautical charts so we decided to go take a look. 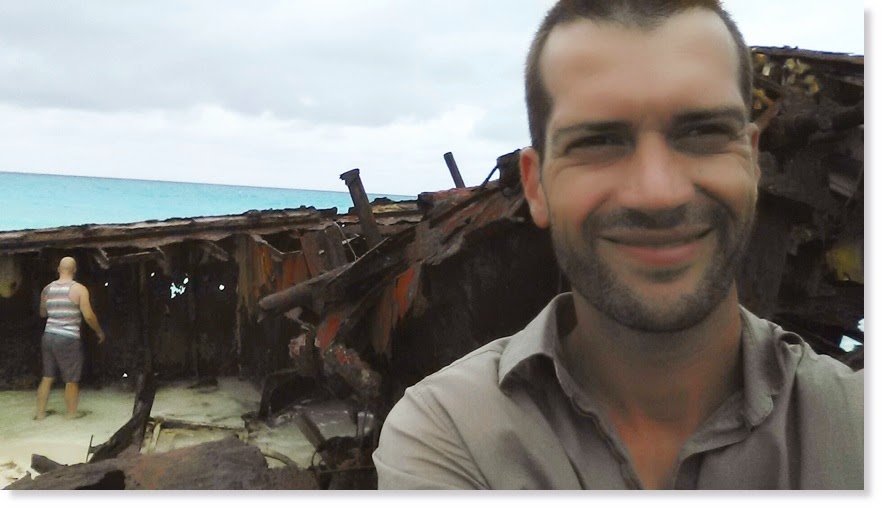 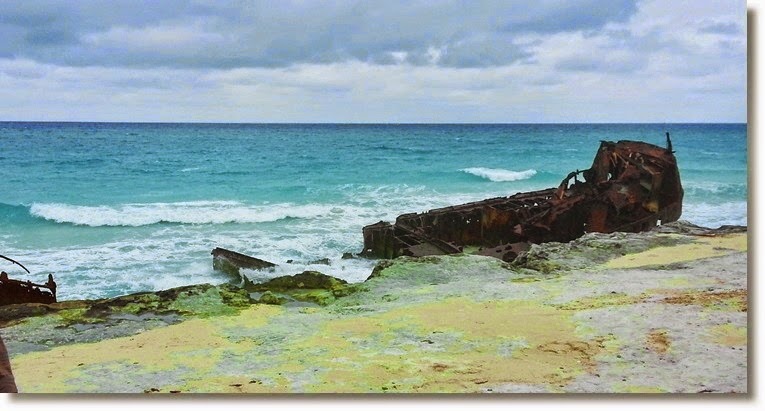 After a couple days, anchoring in North Bimini became a losing battle.  The tides create a fast moving current in North Bimini's narrow channel.  The current flips direction every six hours with the falling or rising tide.  This wasn't a problem for our first two days in Bimini as the winds were light, and we have a good anchor capable of quick resetting in the opposite direction, but the second night we had a rude awakening to the problems that counter wind and current force on a boat like ours.

There was a storm the second evening that brought north winds to counter the north-flowing current.  Robin just can't decide what to do in these situations.  The keel, like a mighty arrow feather, forces the boat to point south into the current with surprising force.  The furled foresail, on the front of the boat makes the boat want to point south, down wind.  This seems like it would all work out, except that the current flows easily over the keel while the 30-40 knot winds wind pushed the boat forward into the current.  This results in the boat "sailing" over the anchor line at the bow with the bowline running under the boat, forcing the boat to stop hard at the end of the anchor line before turning, usually to starboard, while hard on the line.  Turning abeam of the wind and current makes the boat sail in its new direction, in a southward facing arc, hard against a taught anchor line, until we are facing east.  Then the boat stalls, and falls off to the south again, but quickly "sails" at a remarkable speed around the southern arc 180 degrees until it is facing west ... then back again, and again.  The pattern only breaks when wind speed falls low enough for current to overcome, which pushes us onto the anchor ... all the way to the northern swing...  Basically, we occupy every square inch of the circle that our anchor line will allow while also ripping the anchor out of the ground and dragging it back and forth hoping it will reset with every direction change.

With rocky coral and an amphibious plane landing strip surrounding all sides, I was not comfortable sleeping in this situation, so I hailed the Big Game Marina nearby for a slip.  The dockmaster named a slip by letter and number, but nothing on the docks indicated that sort of organization. When I finally saw him on the dock, I realized he was trying to get me into a slip facing upwind. I'm sure this made sense to his motor-boat-routine mind, and I would agree if it weren't for the ripping opposing current and my full keel's tendency to point me right into it.  I couldn't get him to understand the problem either from the radio or the deck, so I decided to try and slip into the dock against the wind and with the current anyway.  Sure enough, as I tried to round up into the wind, the current and wind tried to keep me faced the wrong direction, stalling as I came around while the north-bound current pushed me broadside into the dock at it's full speed, about 3 knots.  A slow walking speed doesn't seem like much, but when it is 8 tons of weight being moved at that speed by a mass of water on a fin big enough to do it, it is way too fast.  We pushed hard against a piling.  I noticed we weren't the first to give the piling a good nudge, because the rubber bumper bolted to the piling wan't anymore.  The resulting uncovered bolthead standing proud of the wood, carved a long wavy gash in my paint from midships to stern down the starboard side.  We then grabbed the dock, tied the stern, swapping stern and bow docklines, were then able to safely maneuver Robin to the outside side-tie dock.  This was reserved for 100 footers, but since less than 10% of the docks were occupied, I told the dockmaster I wasn't about to try and fight a gale and ripping current in the dark again just to put my boat in a different slot overnight.  We agreed that Clint and I would be gone tomorrow.

The Gale force storm bashed Robin against the dock fenders.  I dislike the way that he moves when tied up.  I would rather feel the consistent flowing wave and wind motion on anchor than feel a boat yank on docklines and slam against rubber fenders.  I spent the entire night laying in bed, grinding my teeth and trying not to think about cleats being ripped out of the deck or a stray bolt grinding holes in my hull.

We were told to be off the dock by 10AM, so the next morning we motored to the spacious anchorage in South Bimini.  The driveline started knocking badly along the way, but I figured I would just add it to the growing list of things I would be doing on the boat before our next major movement.  The furling line had already been frayed to threads on the gulfstream crossing, and would need to be replaced.  We were still in our pajamas with coffee in hand, our pocketbooks $100 lighter for the night, more repairs needed in the near future, a large scratch down the entire side of Robin's hull from last night's gale, but still happily afloat and in one piece.
Posted by Andrew Lea at 5:18 PM