With weather getting less predictable so late in the season, we decided to make rapid progress home with a direct sail back to Nassau. From Arthur's Town we would sail west, keeping north and skirt the southern coast of Eleuthra, cross the Exuma Sound, sail right through a passage near the northern tip of the Exhumas, and then jig northwest to sail right into the eastern entrance to Nassau Harbor.

Experience led us to longer and longer (aka: more accurate) calculations for average distance to destination, so we figured on a conservative a 20 hour sail.  We left Arthur's Town, Cat Island at 3:45 PM for the overnight sail. We predicted a sunrise arrival in the  Exumas and a near-noon arrival in Nassau, with plenty of sunlight left for error.  And if we sailed faster than expected, and finished the leg to the Exumas before sunrise we would be able to turn north up the Exumas until sunrise and pick the next best crossing, then sail a shortened northwest leg through the morning.

Wind was coming steady at nearly 20 knots directly from the east, so I used my spare Garhauer 4:1 snap shackle blocks to rig a boom preventer so we could safely sail wing-and-wing dead down wind out of the anchorage in Arthur's town at 7 knots.  Engines are for the nervous.  I even found that the Aries windvane actually really likes sailing wing and wing downwind, provided you set your sails correctly for helm. 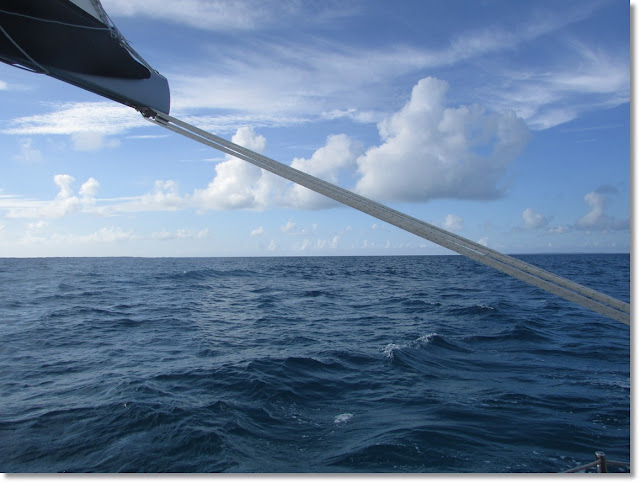 In our usual routine, after setting the windvane I droppped three heavy 6" plastic squid lures in the water to troll, set out on two hand fishing spools with massive 150lb. test clear monofilament line.  I had taken to sending two lures out on one of the spools, spaced at about 15 feet, so maybe it "looked" like a small school of squid were following our boat.  (Do squid school?  Do they follow boats?  Fish don't give a shit, so neither do I.)


Shortly out of sight of Arthur's town we landed three Jacks on all three lures at the same time.  During the "fight" (I throw on leather gloves, grab the line by hand, and mostly just yank them aboard) we lost the second lure on one of the lines, but still ended up with two Jacks alongside.   I wasn't really able to ID them (Jack Crevalle?), but I know their shape is both edible and tasty.

When I gutted the first jack, it had some strange yellow grub-like things in pockets around the gut sac, but when I began cutting the filet at the head, I saw they were big yellow worms and they had eaten pockets throughout its flesh...  We tossed it back and I began filleting the second one.  Same issue.  I thought back on every piece of raw fish I had devoured.  Still within range of BaTelCo's Cat Island Cell Towers, Sarah looked up wild fish parasites on Google and confirmed our findings, while I dumped bucket after bucket of seawater into the cockpit to wash away the blood and guts.

I steered west into the sunset; I couldn't be taken by its splendor.  Covered in the red spatterings of missed fish guts, I gazed downward into the endless ocean and mourned the death of my love: Sushi.

But the ocean heard my call and shortly after sunset, as we crossed into the deep of  the Exuma Sound and landed our first Yellowfin Tuna, two at the same time.  A raw fish eater's delight.   We couldn't take on that much meat, so I tossed one back to filet the other.  No worms, just that famous firm beef-red tuna flesh. 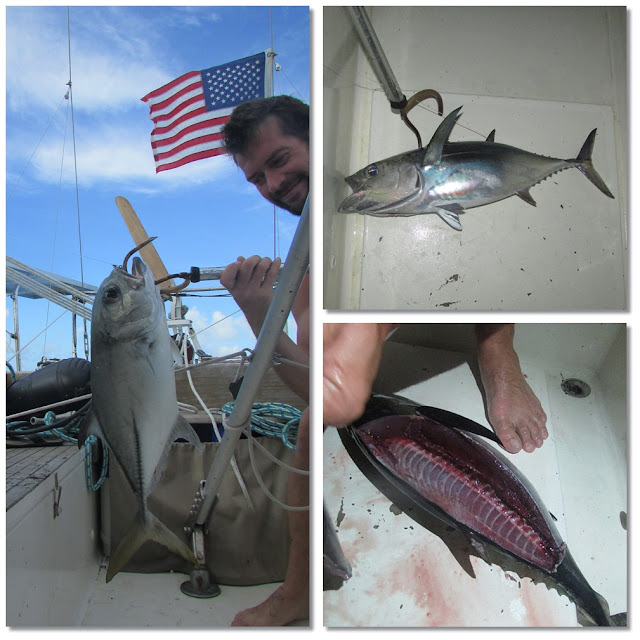 After filling up on tuna, we watched a movie to start the overnight passage on the west leg to the Exhumas.  We were following a rarely-travelled path through the islands with no shipping lanes until morning, so we relaxed below for much of the night on a "mutual watch," allowing our AIS/GPS warning beacons and regular on-deck checks to prevent mishaps in the dark.  The boom preventer proved very useful as I was able to fine tune the rig to allow the boat to ghost downwind as slow as 2.5 knots with about the same in apparent wind across the deck while Alfred, our Aries windvane, self-steered.

Yes, you read that right.  Don't give up on your windvane!

I believe you can balance almost any self-steering device with sail trim.  Just play with your boom vang, Cunningham, outhaul, preventer (if downwind), etc., and especially sacrifice your sheeting in order to find the sailtrim to balance the boat in a way that your windvane likes.  Optimal performance trim does not result in optimal cruising/self-steering trim, and the half knot you lose in speed is made up for by perfect directional steering that responds properly to swells and waves over the course of hours and never stalls.  A well-set windvane is as good as 90% of helmsmen, and even a better helmsman would require constant concentration to beat it over a long course.  We will eventually get an electric autopilot for motoring, but the windvane is an amazing tool that is far more useful than most people give it credit for.

Sunrise after a full night of ghosting downwind in still water, and Alfred the windvane finally gybed at 2 knots boat speed with zero wind across the deck.  I was half-awake eyeing the sun anyway, so I stepped on deck and looked around at the glassy sea.  We let the sails hang and the boat bob in the middle of endless deep blue, 10 miles east off the Exhumas sea shelf, while we made coffee and breakfast and prepared for a day of motoring.

The next day went smoothly.  We motored up to the eastern shore of Highbourne Cay, where we had first entered the Exhumas a month and a half earlier on the west side.  It was an easy inlet just north of the island, and by the time we were crossing on the shelf, the wind was back and we were able to quiet the blazing iron beast again and sail for most of the northwest leg.

As afternoon wore on, we caught a couple very large barracuda that also took the last two squid lures with them when trying to de-hook.  The wind turned northwest, and we had to motor into Nassau for the last hour.  And at 3:45 PM the next day, after a slow, relaxing, exactly-24-hour sail, we dropped anchor. 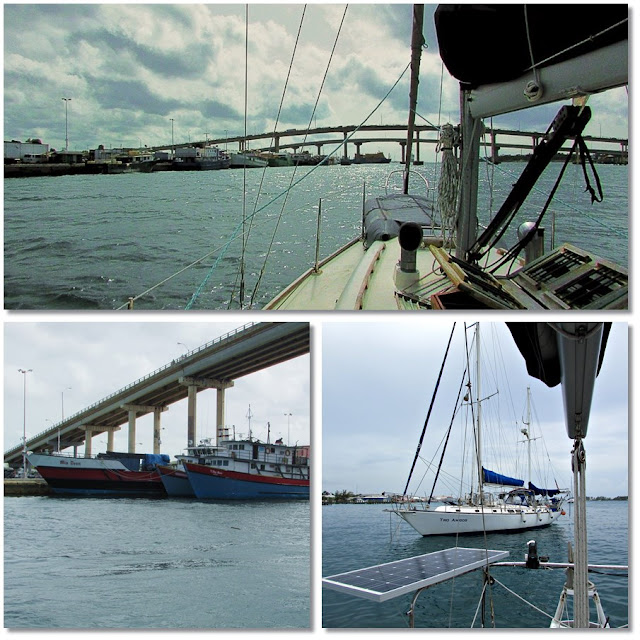 While backing down on the anchor, I released the tiller long enough for the rudder to overturn, and BAM!, make contact with the prop.  The boat started violently shaking, and I shut down the engine immediately.  A jump overboard to inspect for damage revealed that my two bladed bronze prop was now a one bladed bronze prop.  Luckily Cheoy Lee uses a 1 1/2" diameter solid steel driveshaft that is only 16" long for the boat, so that was still straight...  and at least the anchor was set deep.