Stormy Weather and a Broken Prop

We dropped anchor in Nassau Harbor, and while backing down to set it in the bottom, I allowed my rudder to overturn and strike the prop.  (I knew I should have installed turn stops).  The whole drivetrain started shaking and vibrating, so I dropped into neutral.  Our little Yanmar diesel still idled and revved smoothly in neutral, so at least I didn't bend a con rod or crankshaft, but a quick dive overboard revealed that our four-month-old two-bladed prop was a, still youthful, but much less useful, single blade prop.

Immediately I thought about all the hassle of trying to get a spare radio into the country a couple months earlier, and I knew we would have to source a prop locally.  Luckily, a local prop shop on the island had a spare used three-blade prop that could be modified to fit.  "Island cheap" at just under $500, but they still wanted another $450 for an in-water dive installation and wouldn't be able to do the install for two weeks.  I ordered the prop to be modified and they said we could pick it up in a couple days.

Nassau Harbor is a long East-West straight of water between the main island, New Providence, and the barrier island, Paradise Island/Atlantis Resort.  This means that during tidal shifts, the current rips through at about 3-4 knots in a different direction every 6 hours and lays slack between times.  Anchoring in a situation like this can be hairy because your boat drifts over the anchor and starts pulling hard 180 degrees opposite every six hours, so if your anchor doesn't properly roll over and re-set in the sand, then you will go adrift...  FAST... through a tight harbor packed with multi-million dollar boats.

The nice part about storms and heavy wind in the harbor is that you only swing on your anchor in one direction if the wind is strong enough to beat the ripping current.  Of course, then your keel is sideways to the current, and the boat starts sailing up on the anchor before reaching the end of the rode, stalling and falling back to do it again.
Geologically speaking, Nassau is a terrible place to anchor.
Geographically speaking, is a pretty nice place to break down.

Obviously, I was nervous hanging on anchor in Nassau harbor for a couple days without push-button propulsion.  With storms on the forecast, I was more than just nervous.  But, in situations like this, you've got to figure out something.  So I manually deployed another anchor, dove to the bottom to dig the anchors into the sandy/muddy bottom by hand, and scoured the area for anchor-clogging debris.
(With the anchor we pulled up a total of four pairs of jeans, a heavy-weather jacket, and a concrete cinder block wrapped in flannel shirts during this trip.) 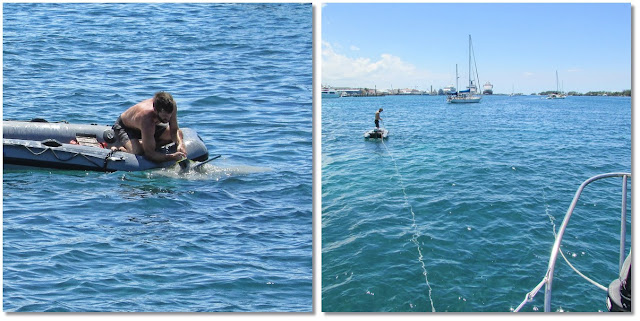 The storms rolled in from the north over Atlantis Resort. 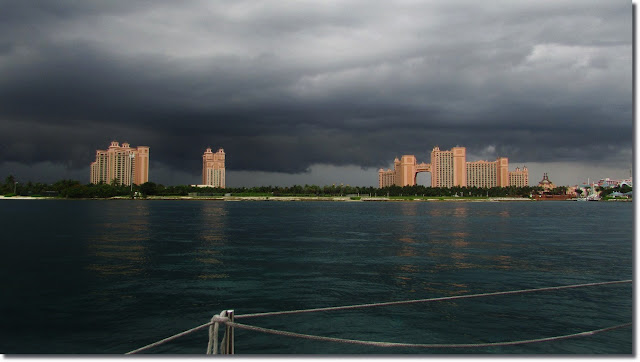 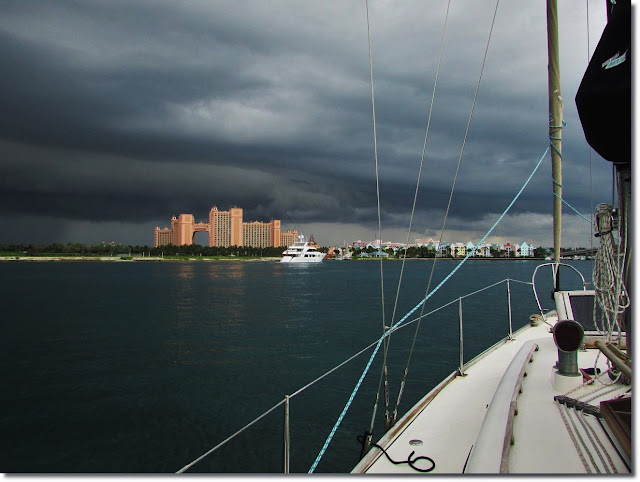 Everybody in the anchorage hunkers down for the blow and 90-degree shift in position. 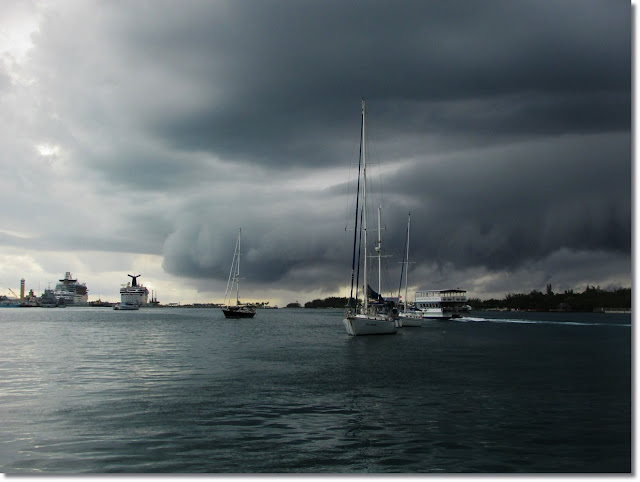 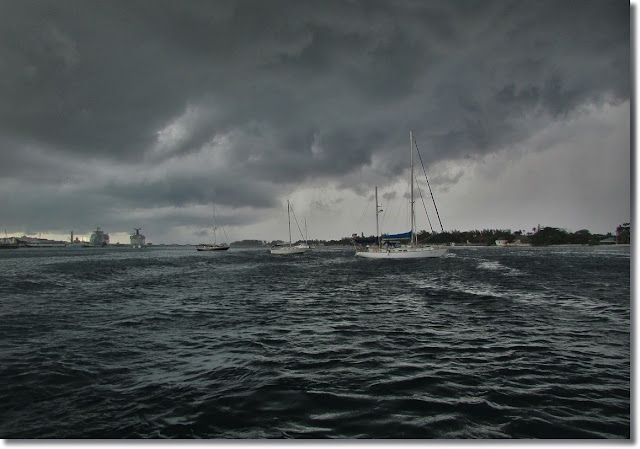 As expected, the prop was being fixed on island time, so we spent another week sitting in harbor without power. Every storm was nerve-wracking.  Watching the GPS drag alarm, sitting in foul weather gear, just waiting to spring on deck and fire up the dinghy (instead of the big boat's diesel) if trouble arose. 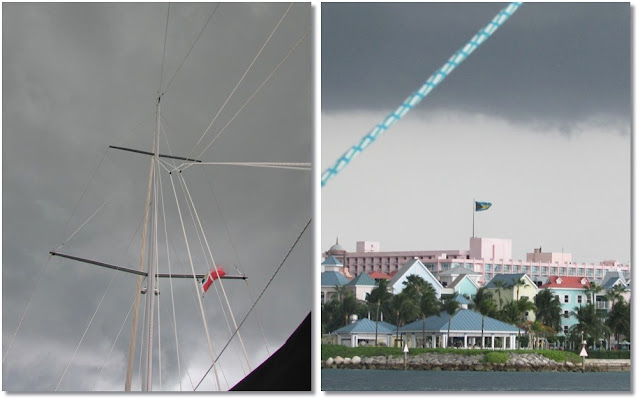 With a week of fast-moving storm fronts and killer oscillating currents, the anchors had to come loose at some point, and sure enough, when returning from a grocery trip to town, we found our boat had drug out into the shipping port turning basin, immediately in front of Nassau Harbor Control.  We meekly dinghied back to the boat, and Nassau Harbor Patrol was on us within minutes, demanding that we move.  I agreed, apologized for the disruption, and promptly failed to notify them that I lacked power and lacked a dinghy with the power to move my boat in the current.

One thing the Army instilled in me: Many problems that seem insurmountable can actually be overcome with rigorous output of brutal manual labor.  With this in mind, I realized "just" had to hand-over-hand haul our 9-ton boat about 150 feet to the first anchor, hand pull the anchor and chain out of the mud, drive it out into the current about 200 feet, and reset it before the current pulled the boat over into the commercial docks.  Then I could do the exact same thing with the other anchor. And if I did that four times in a row, then I could "walk" my boat out, anchor-by-anchor, a couple hundred yards into a safe spot in just a couple hours. So I did that, and I only had to dive 25 feet to dig the anchor out of the harbor's underwater anti-drag cables twice along the way. 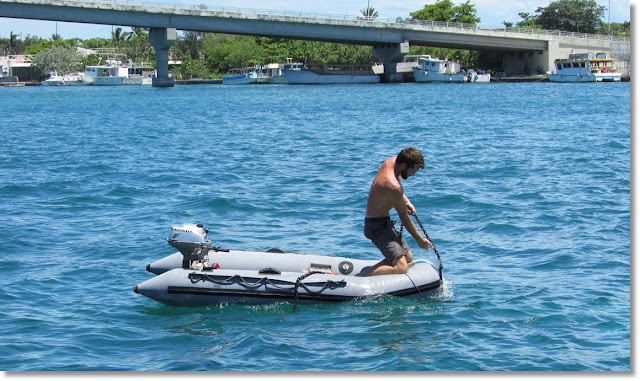 Two days later and a week late, we got the prop from the shop.  I wasn't about to spend $450 on a diver for a half hour, so I gathered up my hammer, pliers, wrenches, prop puller and all my gumption and did it myself. Six breath-hold dives (plus a couple for go-pro selfies) to do the job from start to finish and POOF, one blade becomes three. 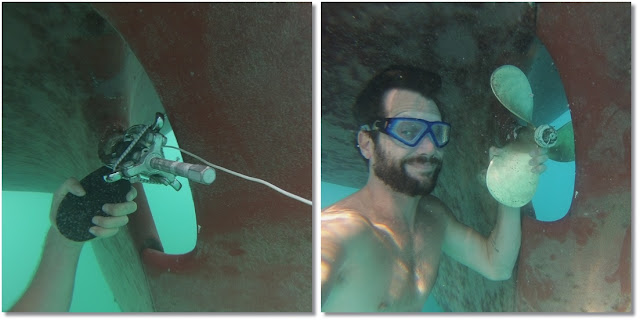 More storms were coming so within an hour or so of installing the prop, we were under sail en route to West Bay at the western tip of New Providence island to catch the first good passage westward. 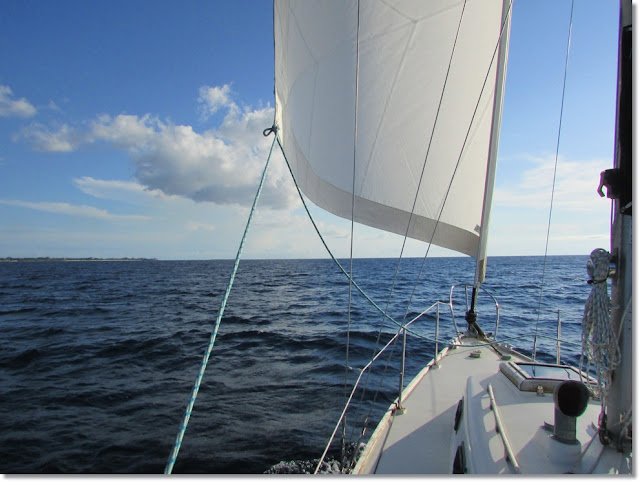 Physically and mentally, this was hell week, but there is nothing like taking some hell to make you feel like a superhero.  And West Bay turned out to be a great little natural day spa to scrub it all away. We watched the sunset from the deserted secluded beach while having ourselves a sand scrub ocean bath.