The morning of December 12th we were towed to the dock by the marina's skiff.  D dock is the farthest dock out from the mooring field and Marina office.  It is next to three bridges, two car bridges and a rail road bridge.

View from our boat: 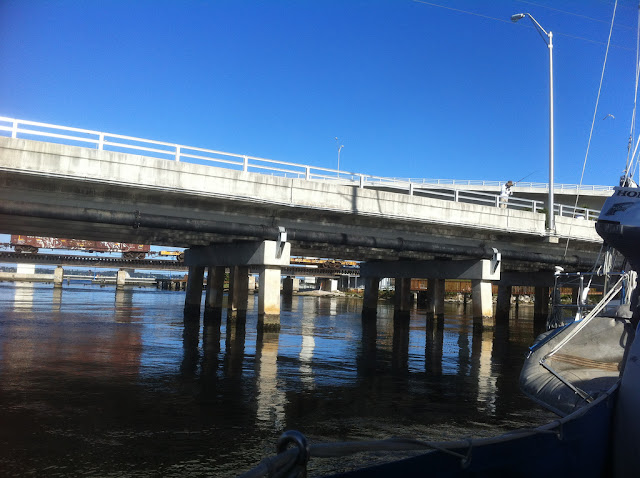 Our boat is side tied between a motor yacht and sailboat that are for sale.  Across from us is an inhabited motor yacht .Just up form us is a 100+ foot mega motor yacht.  Our boat had not had it's decks washed in the nine months it was on the ball.  Being surrounded by all the gleaming fiberglass enhanced this fact rather dramatically, and we found ourselves deciding the outside of the boat needed to be tended to first.  The influence and pressures of having neighbors was back in life.

The day after we moved to the dock the engine was hauled out of the cabin with Marks engine hoist and taken to his shop. They pulled it out while I was at work. So that evening I returned home to step from the dock to my deck, through the empty cockpit, through the unimpaired companionway, to descend the stairs into the cabin. Stairs!  I forgot there were stairs! And they have a paper towel holder built into them! Convenient access AND secure and out of the way.  I stood in my cabin for what felt like the first time and spun in circles. The settees were still piled to the ceiling with all of our stuff that had been moved on but not been able to be dealt with.  But now I could finally start sorting it all out. Finally move in.

That first week I was crazy pumped. Infinite tasks laid before me. I could wake up and get to work on something immediately. It was all so easy. Step on, step off. Toss my laundry to the dock and wheel it to the laundry room and walk back to the boat to work while it washed. Plug in a vacuum, turn on a hose. After months of stagnation I could see visible progress every day. We found out AJ's parents and nephew were going to come visit us on the twenty-sixth so we had a definite deadline to get the boat presentable. We hoped to get the engine back in before they arrived but that was unlikely. For the next two weeks I was busier than I had been in years. I did not manage to write a single e-mail or make a phone call, If we still had the netbook I might not have dropped off the earth but we don't, so internet time is harder to come by these days.
In the mornings before work I worked on the cabin or the engine with AJ.
Ready for it's final cleaning and multi-step prep and paint. 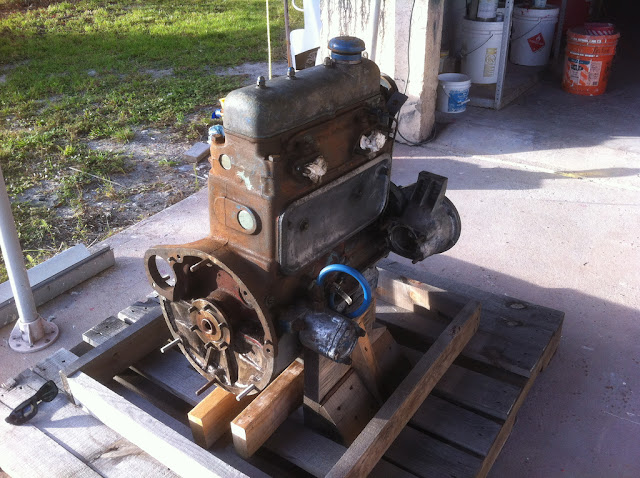 After metal prep and ready wash 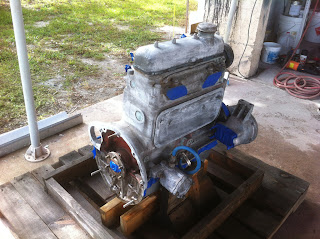 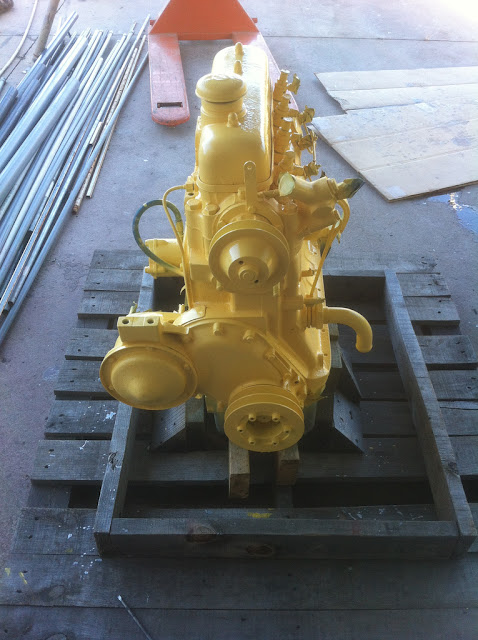 The parts I wire brushed, rust reformed, primed and enameled. 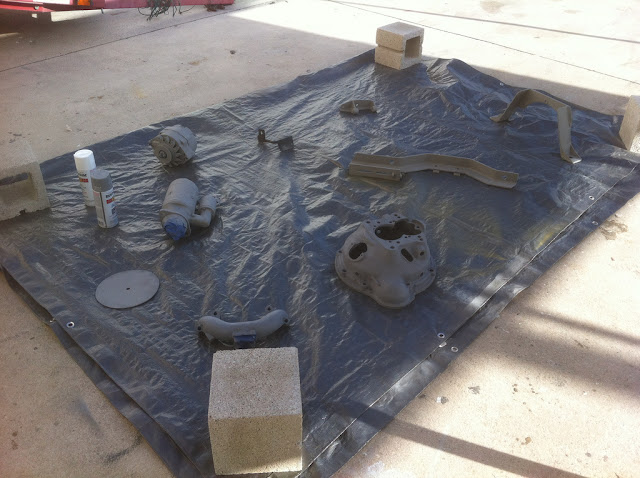 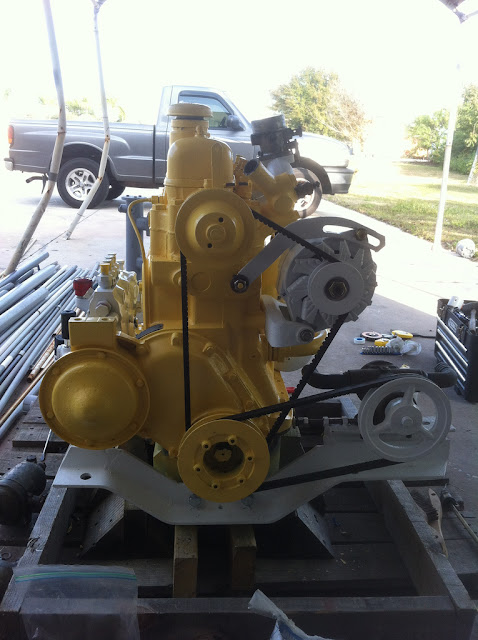 Every day I got the inside closer to a clean functioning home. I sorted through the piles, filled dry bags with seasonals and stashed them away in the storage compartments that I had vacuumed and scrubbed. I scrubbed mildew off the ceiling, wiped down leaky chain plates best I could.  I found a place or solution for everything until it was all gone. By December 25th we had settees, a table.,books on a shelf, a pantry, a home. 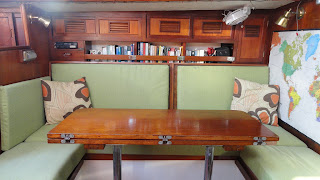 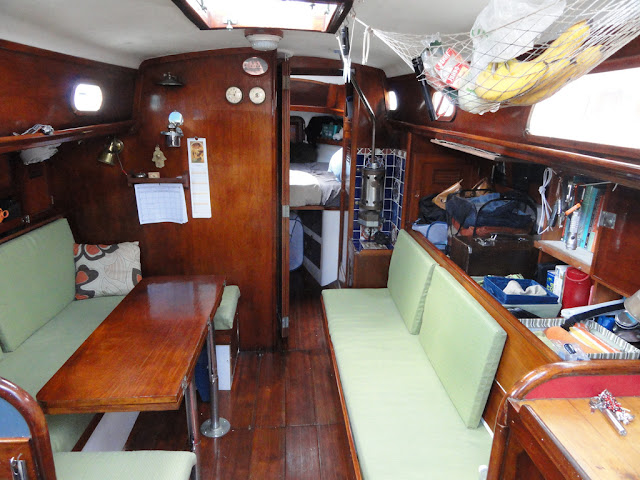 What is behind some of that pretty teak 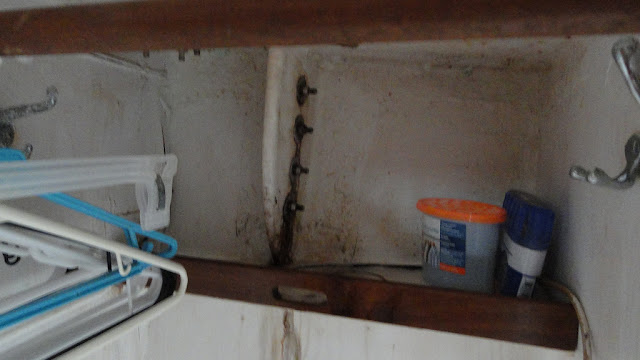 We also power hosed the decks and cabin roof and scrubbed them with deck cleaner. Still dingy but greatly improved. The teak in the cockpit was rough, grimy and in bad shape after having so much crap piled on it through rain and shine for months. We vacuumed, then swept, then hosed, then gently washes it with teak cleaner. When they dried they were clean, soft and smooth. 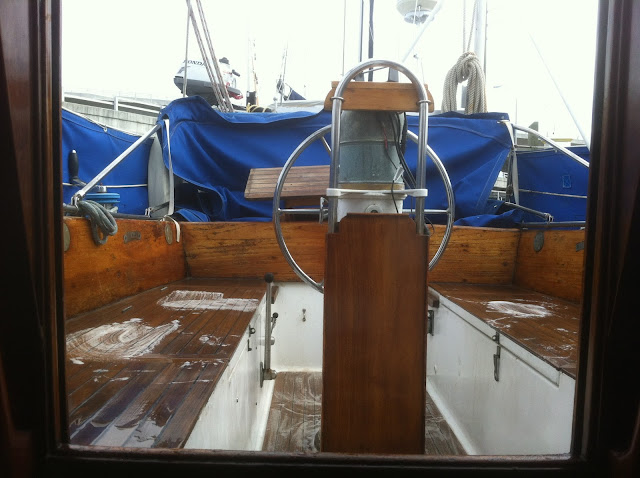 We scrubbed the water tanks with nylon brushes and mold and mildew cleaner. 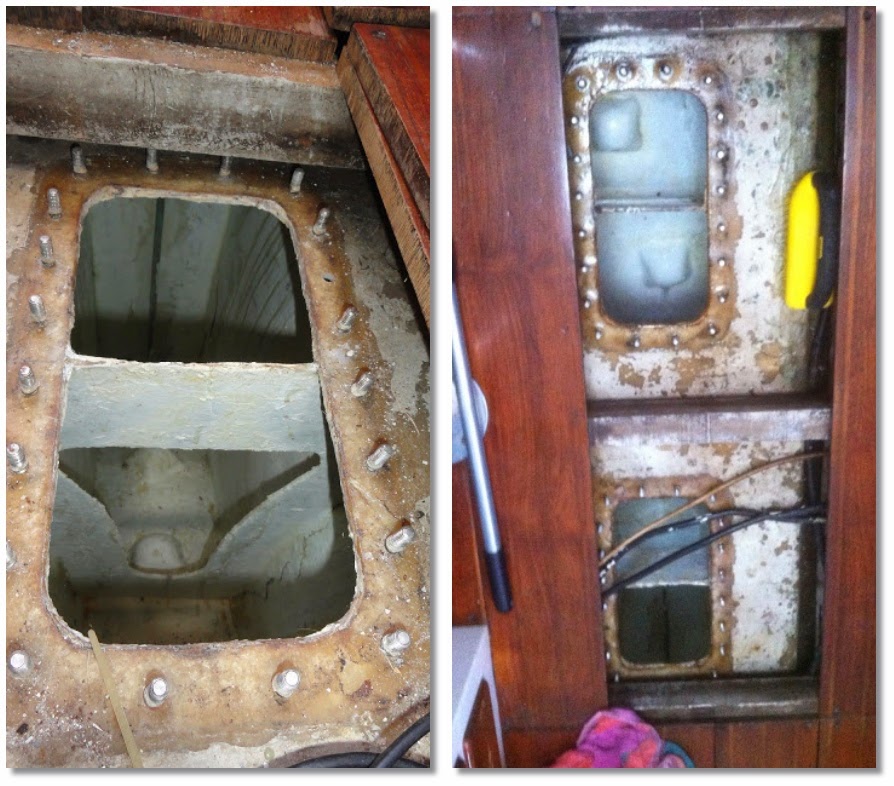 Christmas Day was our first real day off together in weeks. We would have nothing to do that couldn't wait until tomorrow. We were going to sleep in and have a lazy day. Or so we thought until our neighbor invited us to Christmas morning coffee. Since the marina was going to be closed and not serving coffee he figured he would take it upon himself to serve coffee for everyone at his boat. So at 7am on Christmas morning there would be tons of people standing right outside our boat chatting away. So much for a morning in bed either.  We did not get up for the coffee and stayed in bed and laid low anyway.

While the dock is invaluable for the work we are doing, luckily for our pocketbook there are cons do being docked that won't let us get too comfortable or doddle. Namely the complete lack of privacy. People are walking past the boat morning noon and night. There is no sound barrier. Depending on how high you are floating you can see through the windows into the cabin. If you are outside on your boat at all you will get talked to by every passer by. If we were not in such a rush I would not be as perturbed by this, but being on the dock has me seeing my life on dollars per day. With us both working jobs every moment on the boat has to be utilized. So when I have a couple precious hours to work on the boat and half of that time is taken by inquiries, I have the emotion of being on a pay per phone and you are running out of minutes and you know you can't afford to buy more. I have actually not been prevented from having time to eat lunch or shower before work due to folks wanting to chat. I'm on a tight schedule, they are on vacation. AJ and I have both ducked and hid from the shouts of a strangers voice “Hello? Are you home?” and remained still until their footsteps disappeared.. Neither of us have the propensity to be dressed appropriately enough to answer the door when we are at home, particularly when doing work. So, responding would also require frantic dressing and trying to remain out of view . No one walks up to your window in your house and starts yelling questions at you or looking to see if you are home. But such is the etiquette of dock life. So apologies to all for my curtness of late. I'm poor and on the clock. We are odd little hermits with a deadline.
Moving from the mooring field to the dock was like moving from a country house where you occasionally wave at a distant neighbor as they drive by, to the highly populated noises and bustle of the city. Aside from the constant chatter and footsteps, we can hear the car traffic from the bridges. A train goes by a couple times a day. Airplanes fly low overhead. The nearest bridge opens for passing boats a couple times an hour. There is a long loud bell followed by an announcement on a loudspeaker before it opens. Men fish off the same bridge a stones throw from our cockpit. We can hear their conversations. One night the conversation was in Russian. Sometimes it's Spanish,sometimes it's redneck. While it is a lot of commotion, there is something charming about being able to hear a train, automobiles passing, an airplane overhead and a bridge opening all at the same time while sitting on a sailboat. It kinda makes me feel like I'm in a cartoon with all forms of transportation moving around me. Like the opening credits of Futurama. with less future.

On December twenty-sixth after two and a half weeks of non stop work we were ready to receive our first guests and take a break.
Posted by Sarah Lea at 6:07 AM