AJ's parents arrived late the evening after Christmas.  AJ inherited his interest in sailing and wooden boat building from his father. AJ's dad, Phil,  trailered an 18' open daysailing boat he built while AJ was in college all the way to Stuart to take it out sailing on the river. It had been out of use since he raced it at the Texas 200, a 200 mile long open boat cruise on the Texas Gulf coast. First thing the morning after their arrival, we launched it at a park down the road and motored over to the courtesy dock at the marina. 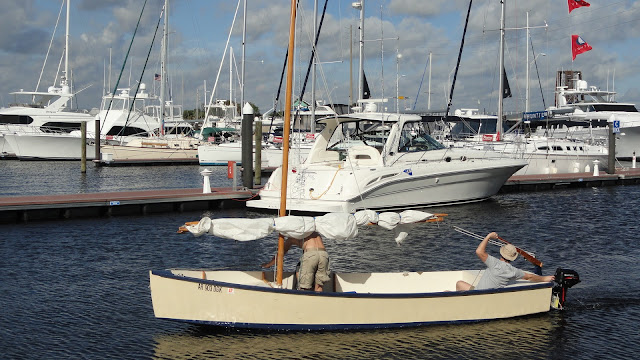 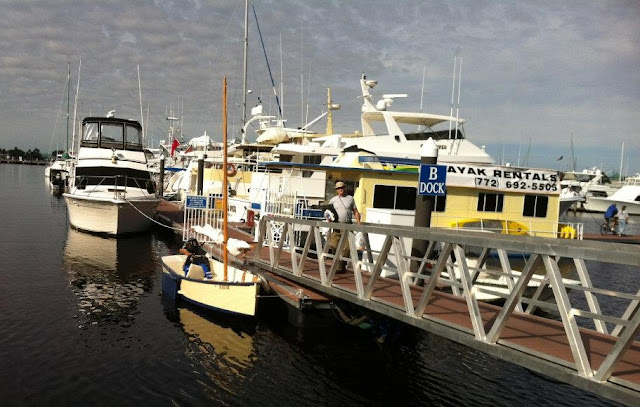 Once at the marina, they came to see our boat in the daylight.  AJ's nephew Dean immediately looked around, plopped down in the cabin and exclaimed, "This is miserable." I cracked up.  Still do everytime I think of it. Also, while AJ was pumping our sink's foot pump to fill up his water bottle Dean asked "What are you doing!?" AJ explained that in most houses, city water is run through a series of big pumps and/or towers that pressurizes water to come out of the faucet at home, but since a boat is not hooked up to the city pressure system, the water must be pumped somehow, so we had a foot pump.  To that he replied, "That's terrible." Maybe the boat life is not for him, though he did seem pretty impressed with the 100 foot mega yacht just down from us. 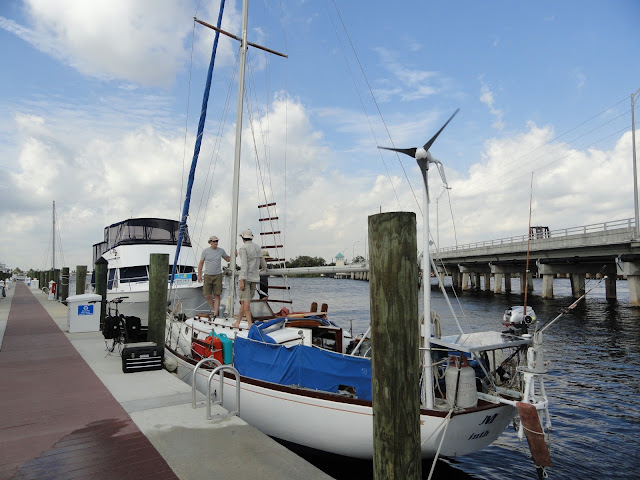 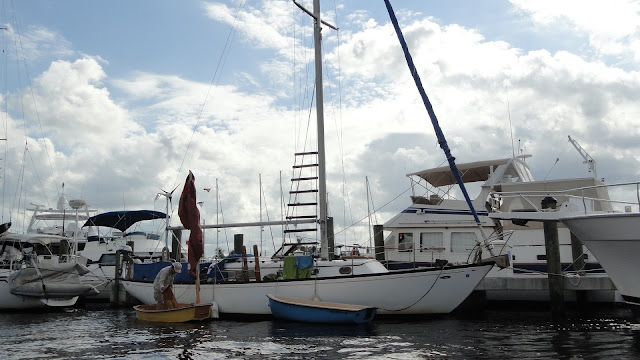 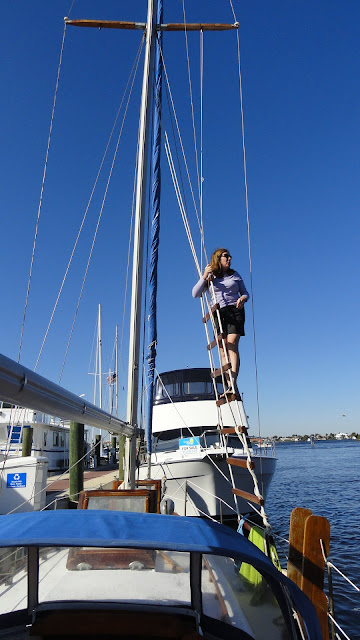 After taking the daytime tour of SV Robin, we all boarded Andrea Christine, Phil's 18' dayboat, and headed towards the bridges that lead to the inlet. The mast was too tall for the first bridge, and we did not want to call for it to open, so dad dropped the mast while underway, we motored under the bridges and raised the mast again once through.  Oh to have that sort of flexibility with Robin!  We sailed down the river towards the St Lucie inlet. The wind was strong and Phil is apparently quite the boat designer, as his old-style standing lug rigged 18 footer sped away from just about every sailboat out that day, even with a reef tied into the sail.  Dean wanted to go to the beach and we were going to try to sail there, but three hours in we realized we would not be able to make it there and back before sunset and had to turn around to return to the marina.  No beach that day, but a (mostly) WONDERFUL day of sailing. 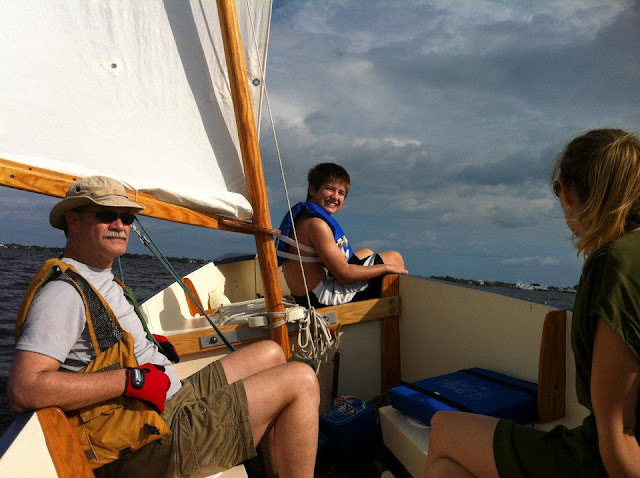 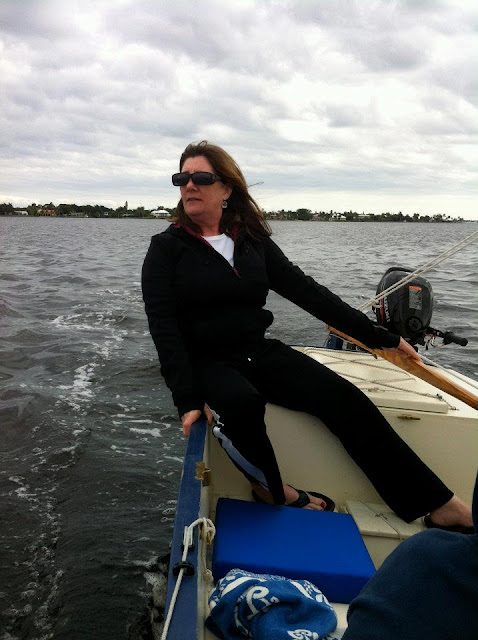 It had been warm that afternoon but on our return the clouds started darkening and we got caught in a hard but brief and cold rain. Dean and I wrapped ourselves in a towel. AJ was at the helm and decided to stand up, take the brunt, and make a game of it. 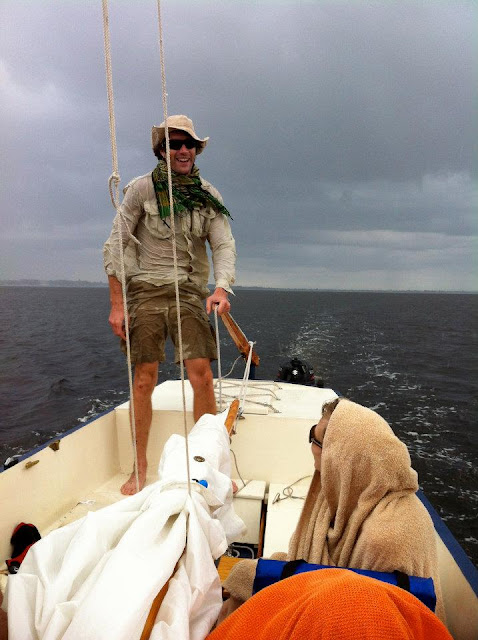 We arrived back at the marina cold and wet and hungry and stopped for dinner.  Andrea and Phil went to take the trailer back from the park to their hotel and Dean came back to our boat. He had seen our fishing poles and wanted to go fishing. AJ took him to the bridge where people often fish just behind D dock.  Dean cast the fishing line into the water, waited about five seconds, reeled it back in, cast it out again, waited about three more seconds before stating “Man, fishing takes a lot of patience.” 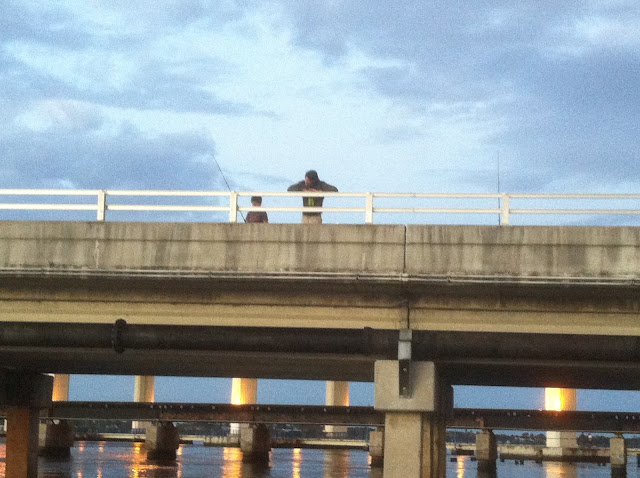 On the second day we went to the beach as Dean was promised. It had been in the 80's the previous week, but that day it was in the high sixties.  Luckily, the water temp was still in the 80's so one could swim, but  Dean was the only one who ventured in. 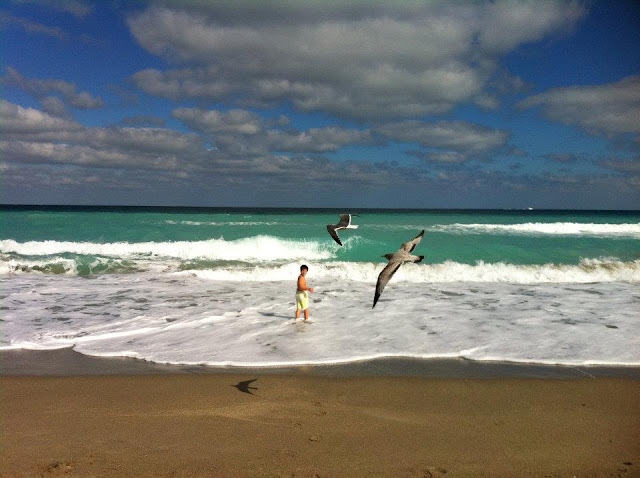 We got back in time for a quick sunset sail around the mooring field to check out the boats that had arrived this season.  This boat is a warship just off the line when the Korean war ended.  IT never saw service, and was going cheap. A couple made it their home and now use it to cruise the Mediterranean and Caribbean.\ 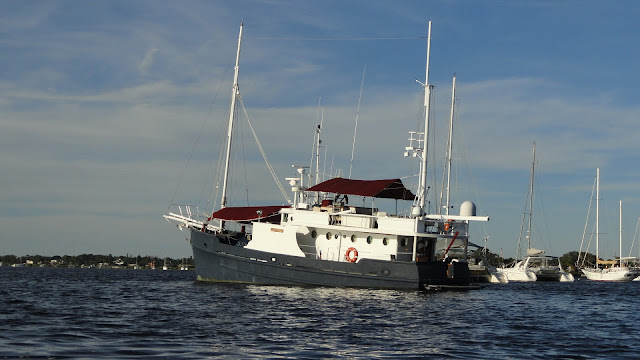 A house boat on anchor in front of the mooring field.  Gin palace, Floating trailer, Keys Condo, whatever you want to call it, I still think they are kinda cool if voyaging is not your thing. 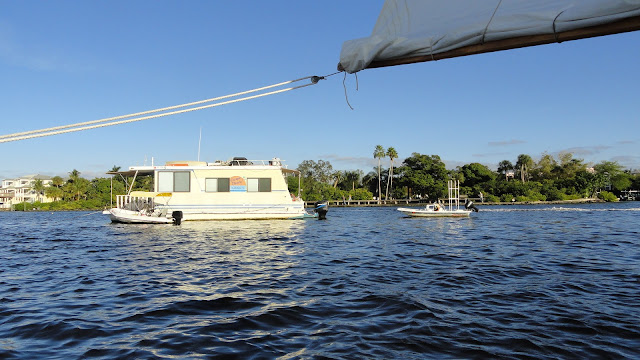 On the third and final day we sailed up the river the other direction. Water front homes line the river's edge, and we just casually looked in their back yard, lounged about and nibbled lunch over the course of a day of sailing.  What I enjoyed most about sailing in an open boat of that size was that I got a sense of the physics of sailing in a less anxiety-inducing way.  In our small dinghy you are not so much sitting in it as on it.  As expected of a 7.5 foot boat, it heels dramatically and bounces violently in wakes. We sat inside the 18 footer and could feel the heel of the boat and get a sense of when and why it moves without feeling like you are going to fall out. The only other sailing option we have is the big boat. Also an anxiety-inducing ride considering you are dealing with such a large vessel and your home. So I thoroughly enjoyed the day trips up and down the river in that happy medium, small enough to be able to see and understand everything that was going on, and stable enough to let you pay attention. 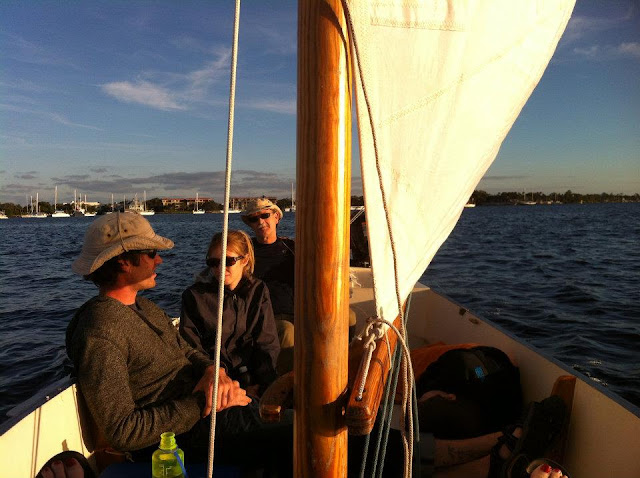 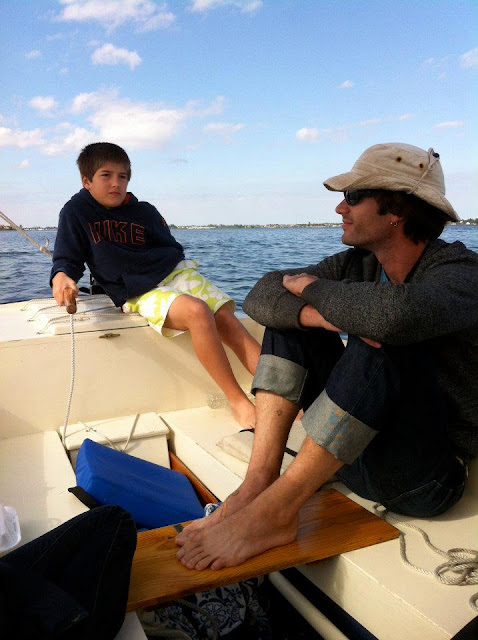 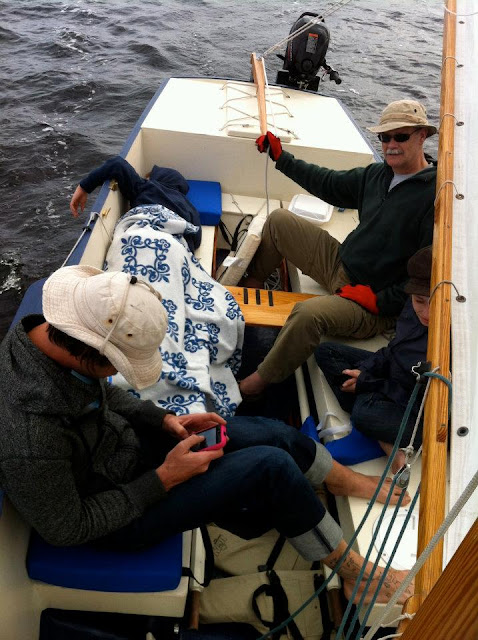 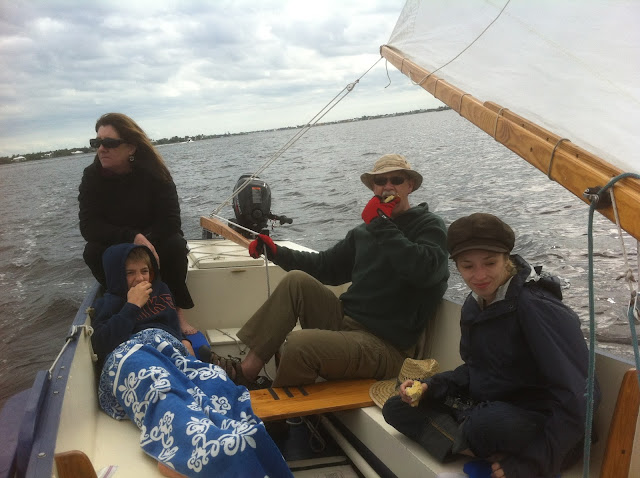 After the last day's sail, Andrea and Phil hopped off at the marina to grab the trailer while AJ was entrusted to bring the boat back to the park to be tailored and prepped for the trip to Arkansas.  Dean seemed to have adapted to the slower pace of sailing by the third day, when AJ offered, Dean was excited to take the helm. After piloting for a while he said “I like sailing.”  Dean was an impressive skipper for 10 years old.  I think the three days may have changed his mind about sailing and speed of life in general.  We were glad to finally spend some quality time with our nephew and parents, and glad also that Phil brought the right tool to do so.
Posted by Sarah Lea at 3:36 PM