AJ got back from the yacht delivery October 23rd. We then cleaned the engine and engine room.  I sat squashed behind the engine with cans of degreaser and scrubbed away at the engine for a week. It had so much build up that I felt like I was rescuplting it, finding all of it's dips and channels and carving them back out. I went through 3 cans of degreaser, a box of que tips (only thing small enough to clean out all the grooves), about 12 rolls of shop towels, and numerous brushes. At then end of the day I was covered head to toe in grease. The clean engine with the greasy tarp finally removed from beneath it: No more grease feet! 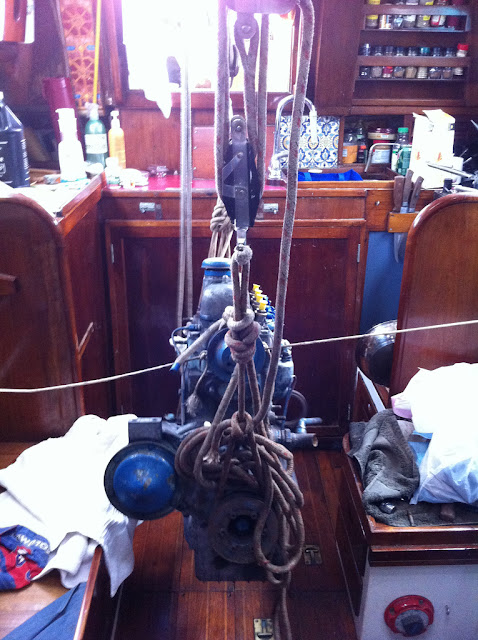 The engine room was a hell hole of awkward balancing and reaching. Covered in years of sludge build up. We shoveled and scraped and scrubbed it until we could see the fiberglass. 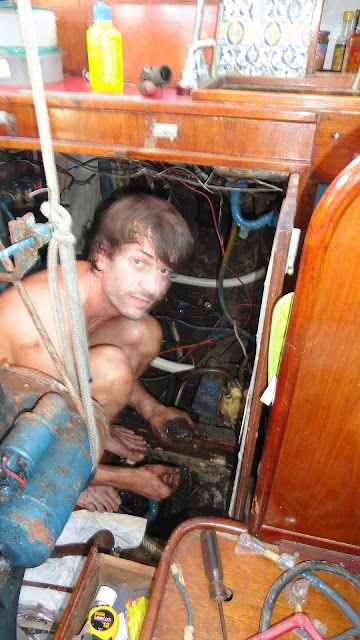 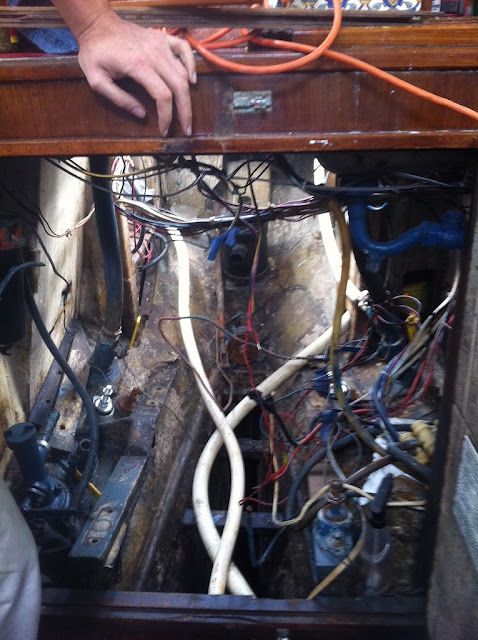 AJ had to order fuel injector pipes and gaskets and random small bits from Brittan. There is one guy in the world selling parts for this engine and he is in England. While we waited on those AJ continued to get parts tested and sandblasted. Aside from cleaning the engine there was also tons of parts to clean and derust sitting in the cockpit. I wire brushed rust off iron and oxidation off aluminum. Metal on metal scraping is not as horrific as nails on a chalk board, but it is in the same family. I don't care for it. But when I brushed around parts of the bell housing it created a resonating sound that sounded like the violin section of an orchestra warming up. That was a nice change.

We slaved away in the grease pit but we were really running out of funds. We had to find jobs time now. By the middle of November we were both working. When I was looking for employment on Craigs list I came across something that sounded like it would suit AJ. The add was looking for extra hands in a composites shop, and rebuilding a small aircraft. AJ loves building and had always wanted to build a plane. AJ contacted the guy and went to work for him immediately.

We could not have even dreamed of a better place for AJ to land. I still can't say for sure what AJ's employer does per se, but he has a carbon fiber composite shop and makes prototypes of boats and small airplanes and a all sorts of things. He is an engineer and inventor. AJ started going to work from 8-5 for Mark.  Mark is making a trimaran that will use a 42' mast. The exact height we need our mast to be. Mark said that if AJ would make the mold for the mast he needs then he would let him make a carbon fiber mast for himself for cost. His cost. Which is virtually nothing. In exchange Mark got a mold he could use again and again. This would mean lack of cash flow but what we would get in return would be worth so much more than he could ever make.  Our mast problem is solved. Mark is also letting AJ make the boom he wants too. The time frame for completing this is unknown, as while the mast and boom molds are on the list, Mark still has other things that need to be worked on in the mean time. But it is worth it for a carbon fiber mast and boom.

For three weeks we rarely saw each other as we scurried to our jobs and back. We had bought another rowing dinghy from someone at the marina for cheap, so we were able to come and go as we needed separately. Funny how you don't notice certain stressers until they are gone. The independence the second dinghy bestowed greatly reduced my overall stress levels. We no longer had to synchronize or get stranded. The weather was cooling off by the middle of November and increased activity became easy. Life became easier. I rowed back and forth multiple times a day. I rarely vistited the lounge because rowing back to my own home on a two hour mid day break no longer meant getting soaked in sweat.  It was now the season in Florida, and the marina was filling up. There were people everywhere.  Parking spaces on the dinghy dock were becoming scarce. I was becoming good at rowing and maneuvering the dinghy around all the other boats.

The sun was starting to set earlier and earlier though, and without electric light there was not much we could do after dark.  We had less and less time to work on the boat.  I would often forget to start looking for the flashlight before the sun was setting and thought about how creating such a habit after 29 years of flicking light switches with no knowledge of the sun's position might be a challenge. But then I remembered that we would have electricity again. I had forgotten that power was even going to be part of life on a boat, and was resigned to it.  This is the good part of living like this. Instead of being pissed every time you don't have power, you get to become excited and happy when you do. I don't know anyone who get's a mood boost from turning on a light, or plugging in their cell phone charger. Being pissed when things don't work has been replaced with a sense of luxury and happiness when they do. 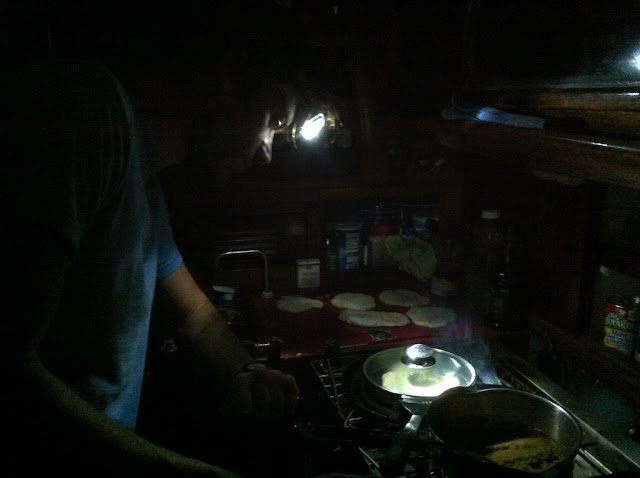 Mag light set in the engine ropes for the evenings. 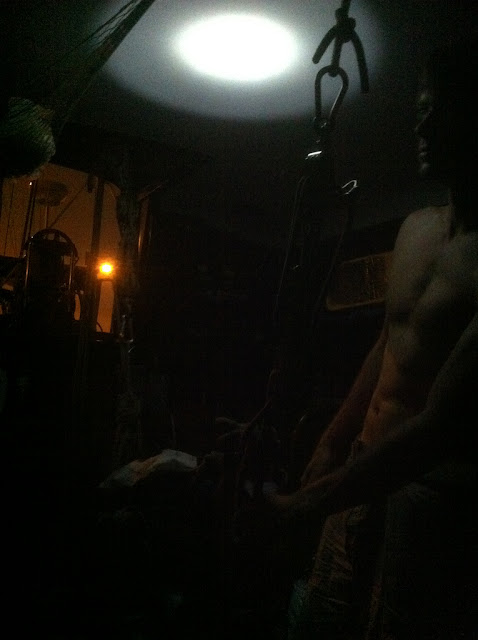 The weeks were going by and we were never home to work on the engine or improve our living arrangement. We were still without power and water and still having to climb around an engine.

When we finally got a weekend to dedicate to our boat it rained. And rained, and rained. The parts were getting wet again. We could not do anything. And I had dropped the netbook in the rain water in the dinghy. Our last and only modern convenience, a crappy wifi signal, was gone. No living space, no power, now no computer. To make matters worse AJ had found out that fuel injector pump and the spare were both bad, and one had to be rebuilt. We were dreading that verdict as the rebuild is not cheap. We felt defeated and AJ was really depressed. He talked about abandoning this engine all together. Finding a used engine that would fit pulling out the credit card and calling it done. But the more we talked we decided our engine had to be finished. There was too much sunk into it already and it was really close to done, we just did not have the proper time or space to do it in. Work took up most of our time, but life on the ball took all the rest leaving us stagnating.

Crisis, depression, drastic re-evaluation and deconstruction of your situation. That Saturday we sat on the boat in the rain and started from scratch. Why are we here and what are we doing? We decided we had to move to the docks. It is more expensive than the mooring ball, but we finally realized that time is also money. And in our predicament, more money than the dock. We would be able to do so much in so little time that it would save us a few months on the ball. On the dock we would have access to a power supply and water hose. We could use the hose on the engine room and the deck.  Water would no longer be a limited resource, as we could fill up our sprayer right there on the boat with the hose, saving a 30 min trip for every 6 gallons we bring on board. We would be able to plug into an outlet with an extension cord and use power tools. We could toss anything off the boat and out of the way when needed. Taking out the enormous amounts of trash accumulated during projects would be as simple as stepping off the boat and tossing it in a bin 4 feet away. We could actually utilize the time we did have.

We also needed to get the engine off the boat. If it had not been in the cabin for the last two months then we could have been working on other projects, any and all of them. But as we were we could do nothing but wait for the engine to go back in. We probably should have moved to the docks day one and powered through the other than engine projects. But you live and learn. AJ called his boss and asked if we could use his engine hoist and take it to his shop for the rebuild. He said sure, so we went straight to the marina office to inquire about getting a spot on the dock. And to find out if they would tow us to it. Yes and yes. They had one spot left on D dock. We woke up depressed and hopeless and went to bed with the boat ready to be docked in the morning. Ready to whip the boat into shape. It was December 11th.

Wham Bam we are almost up to speed.

Some pretty Pics of November: 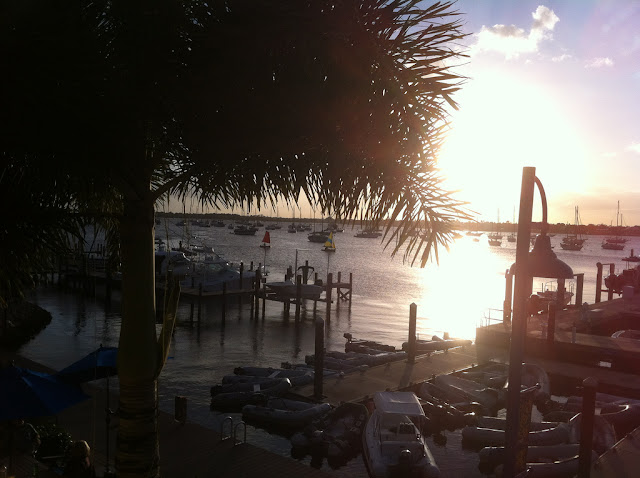 Bird on our Mooring Ball 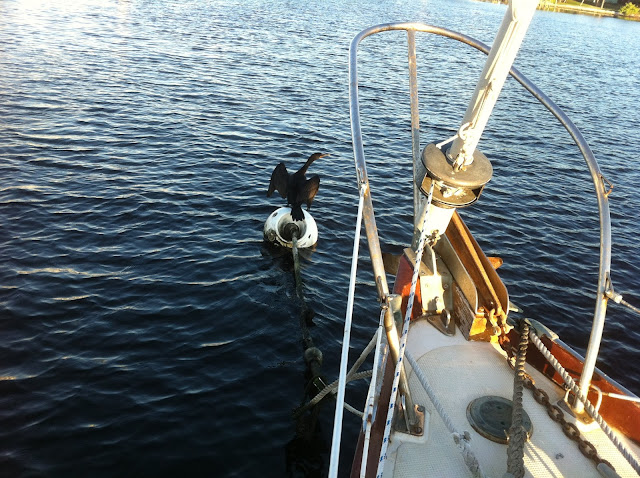