Bimini was just a day's crossing from Miami, and it felt like a day trip vacation.  Adding to this feeling was the influx of boats that crossed just for the weekend.  I wanted to get knee deep in nowhere, and Bimini just wasn't going to cut it.  After a week of easterly wind we had a break (that is to say: no wind) when we were able to motor the 75+ miles to the Berry Islands.  Motoring in a boat that travels at a brisk walking pace with the diesel engine churning out power immediately below your feet is no fun, and on that wind-less day with blazing sun, it was a brutal 14 hour ride, punctuated only by the catch of a couple barracuda. 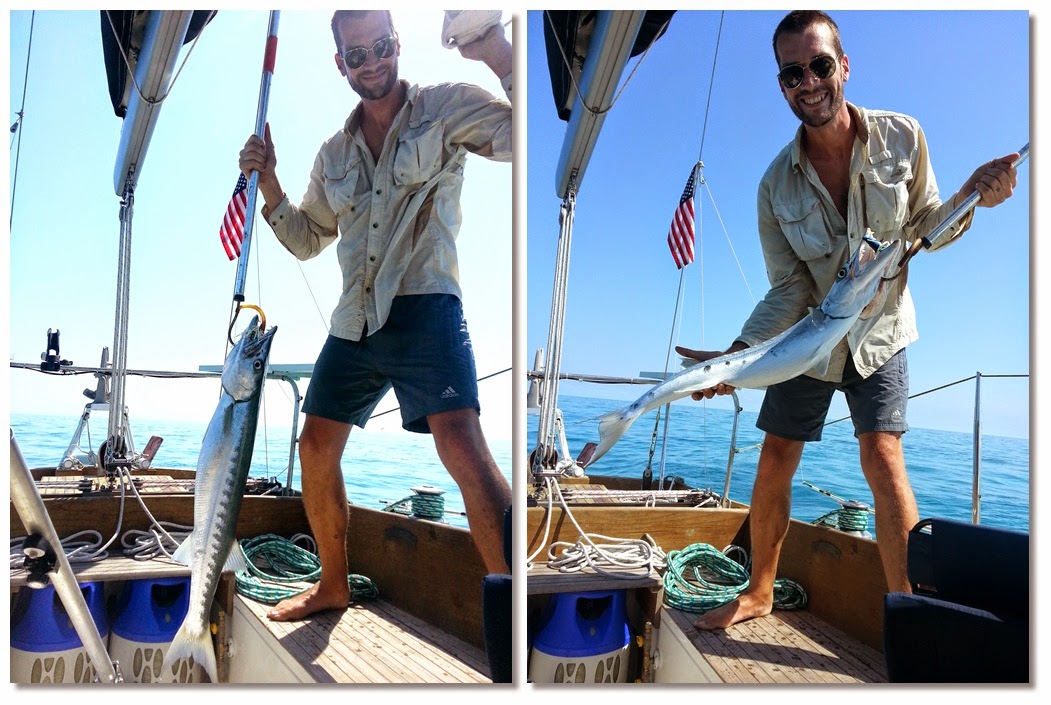 Feeling adventurous, we decided to butcher and eat one.  Bad decision.  We figured out why barracuda is on no menu anywhere.  While we avoided ciguatera by choosing a smaller 'cuda, we found that barracuda is still not something you want to eat.  It is a somehow dry-yet-oily, almost fibrous meat that has a pasty, bitter flavor.  We made pasta for dinner with enough leftover for breakfast, (we reluctantly decided to finish the dish the next morning to not waste food.) 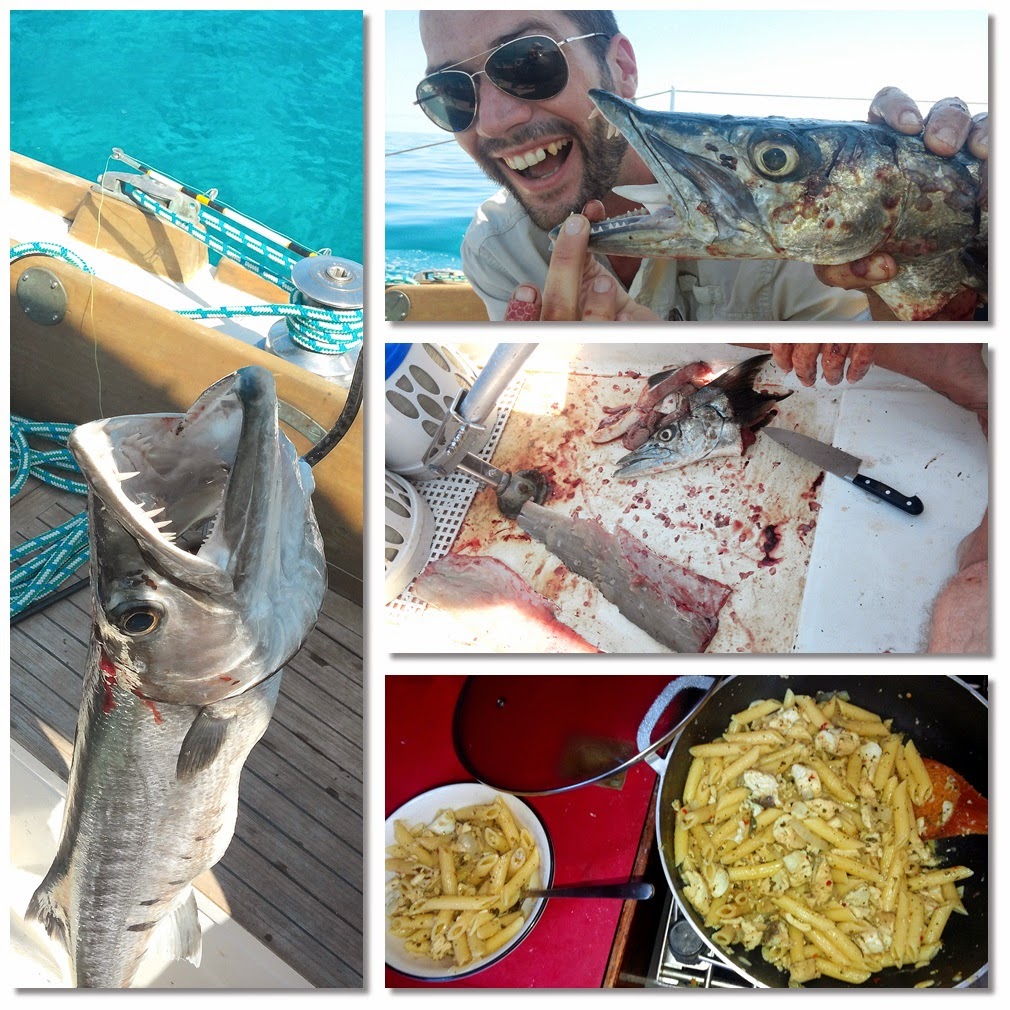 A couple hours after dinner and just after sunset, we finally arrived in the Berry Islands, heading for the northernmost anchorage. A small pocket with an even smaller entrance nestled between Big Stirrup and Little Stirrup Cay (pronounced "key").  Both cays were marked on the charts as "private islands". And since I have a penchant for "light trespassing," I was excited to see what they would contain the next morning.  At night all I could make out were a few lights on shore.  The next morning, (over the forced barracuda breakfast and coffee), we heard jetskis and music coming from shore.  Turns out that Little Stirrup key is owned by Royal Caribbean cruiselines and Big Stirrup is owned by NCL cruiselines or something like that.  Didn't really care, as I saw that two towering cruiseships had anchored in the wee hours just outside of our private little harbor entrance.  Some "creeping" with the binoculars (Clint's verb for boater's predilection for remote voyeur-like observation of unwitting subjects) showed that last night's intriguing lights from shore were the jet ski/kayal rental and parasailing ride kiosks and the tiki bars serving frozen strawberry daiquiris to the cruise guests.  Our antique minimalist sailboat was anchored amidst buzzing jet skiiers, inexpertly-paddled plastic kayaks and pasty-white vacationing middle Americans packed onto a small beach turning themselves pink.  Not at all what we had come to the middle-of-nowhere Bahamas in search of.

Yesterday's disappointing fishing catch and a disappointing arrival location meant we were leaving immediately.  A quick look at the chart revealed the anchorage we should have headed for: about five islands and a few miles south, on the shallow flats west of Big Harbor Cay.  There was a small settlement named "Bullock's Harbor" with an anchorage nestled behind the cliffs that had easy access to a low concrete sea wall at the edge of a small church parking lot ("The City Dock" we later found out).  The wind had picked up since yesterday, but only to about 10 knots from the east.

I decided since the day was young and we had nothing to do, that we would sail the whole way, even tacking for a few miles into the wind on the approach.  I asked Clint to just hang out and watch so I could practice tacking and reset sails in such light wind with a tiller by myself.  I managed rather easily, and was able to squeeze out 4.5 knots of boat speed hard upwind with only 10-12 apparent wind, losing only a knot on my six tacks.  When we approached our final anchoring point, I decided to try and do that by myself and under sail as well.  I furled the foresail on approach, rounded "into irons" dead upwind under just mainsail, coasted to a stop over our anchor point, cinched the mainsheet in to pull the boom hard into center, ran forward and dropped the anchor.  With just the mainsail up and sheeted hard the boat drifts backwards slowly, the sail acting like a fin on a dart to keep the boat pointed into the wind.  We drifted onto the full scope of our rode (anchor line and chain) and I dove overboard to check the anchor was well set in the sand.  I jumped back aboard and dropped the mainsail, completing a full skills-test of upwind tacking and anchoring alone under strictly sail.  I was quite impressed with myself so we immediately went ashore to find that cold beer reward a day late. 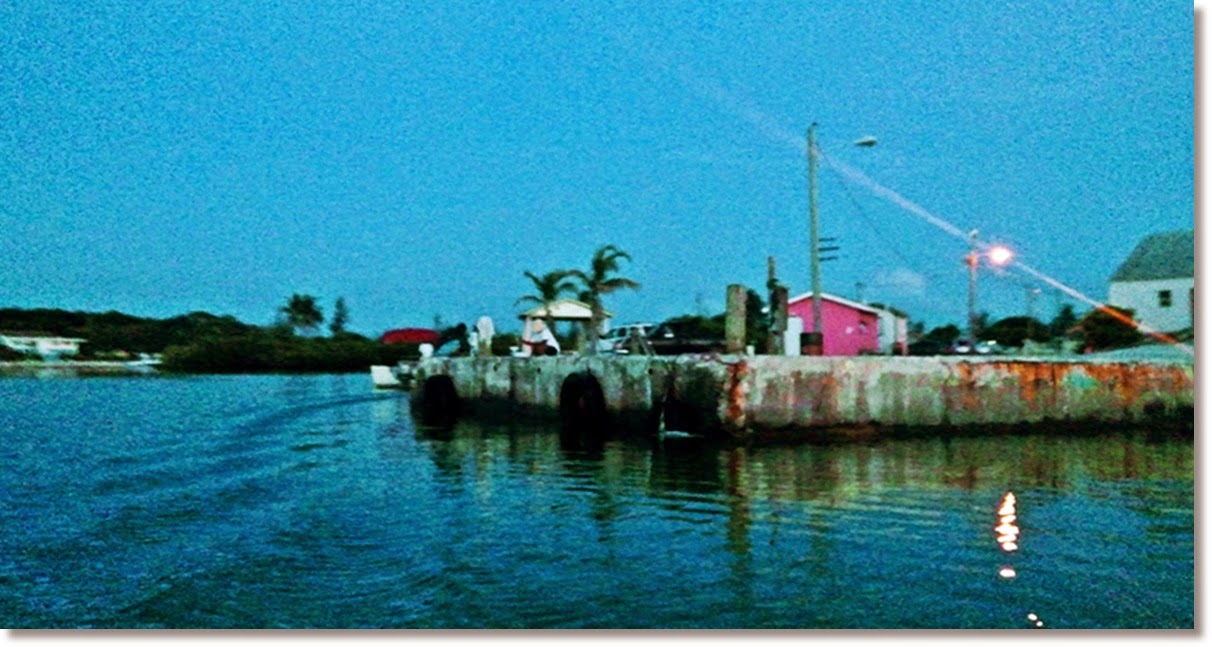 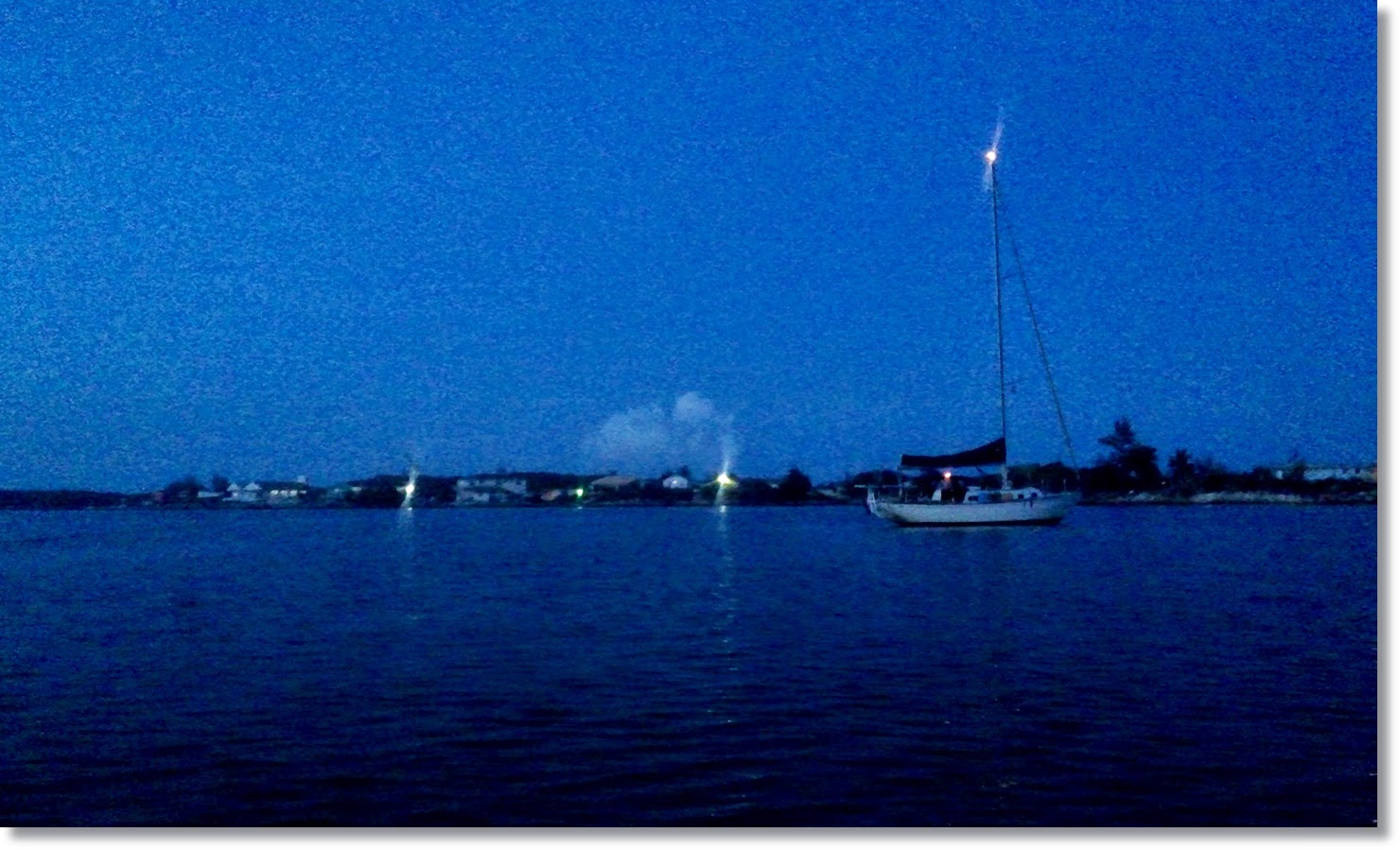 After a week in Bimini and a long hard day crossing, we were beginning to realize that the thing you want most when you don't have refrigeration is cold beer.  Rum with freshly harvested coconut juice and lime is abundant, cheap, and easy on the boat, and that was our drink of choice (total menu choices = 1) at the end of nearly every hard day (all of them), but keeping beer cold requires serious equipment.  Off to the only bar in town to toss back a couple Bahama-local Kalik Golds.

We spent another couple days in the harbor exploring the nearby islands.  Another private island, just to the north and more like I was hoping for, proved an excellent site for some light trespassing. 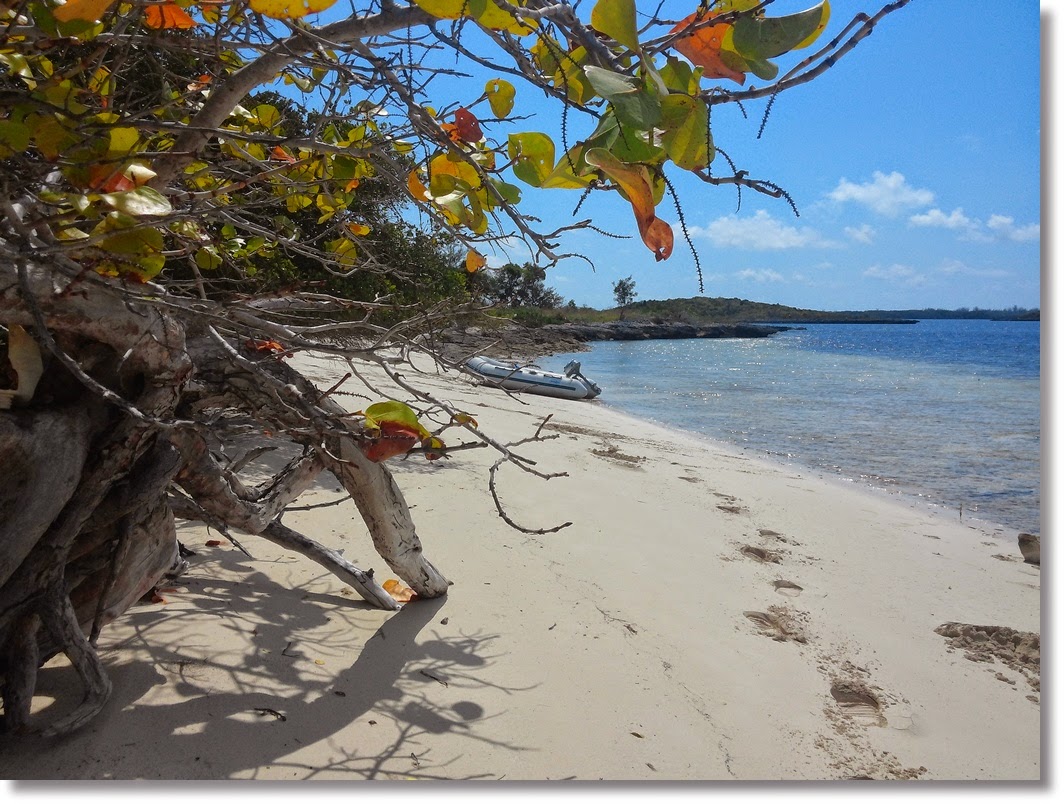 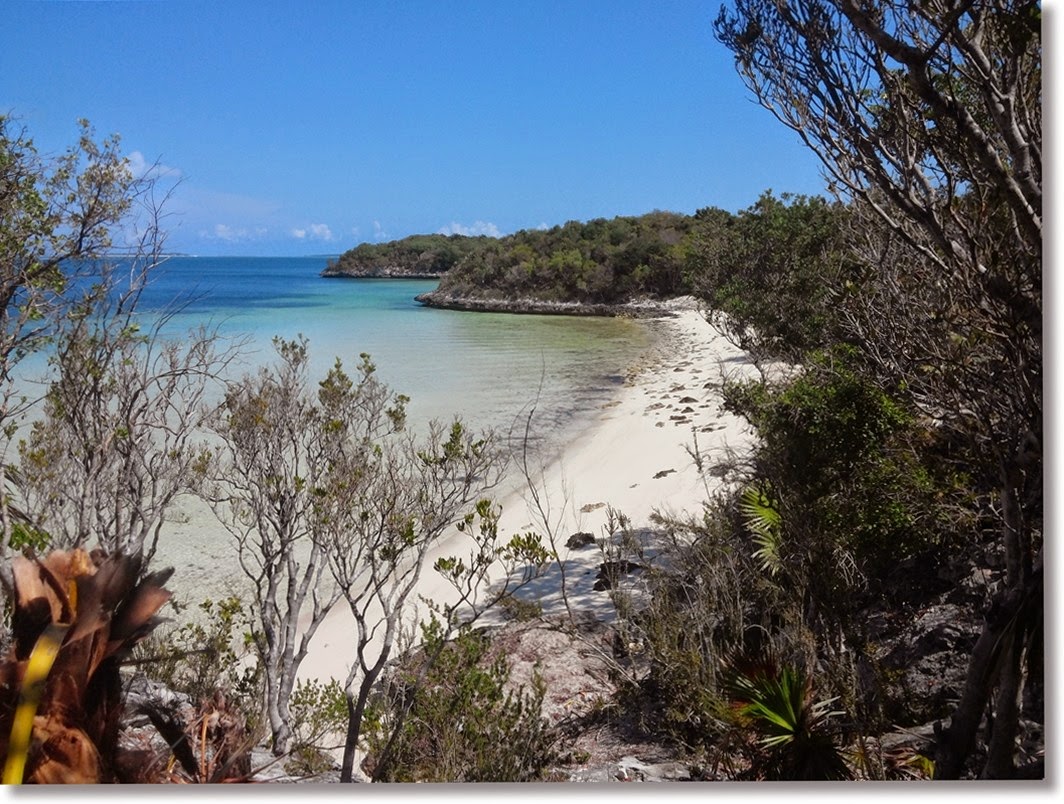 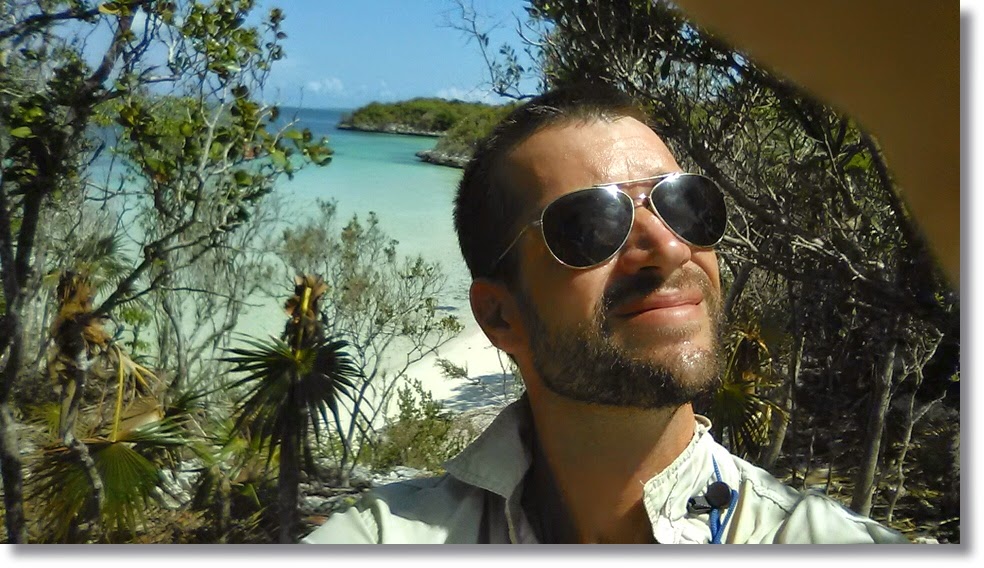 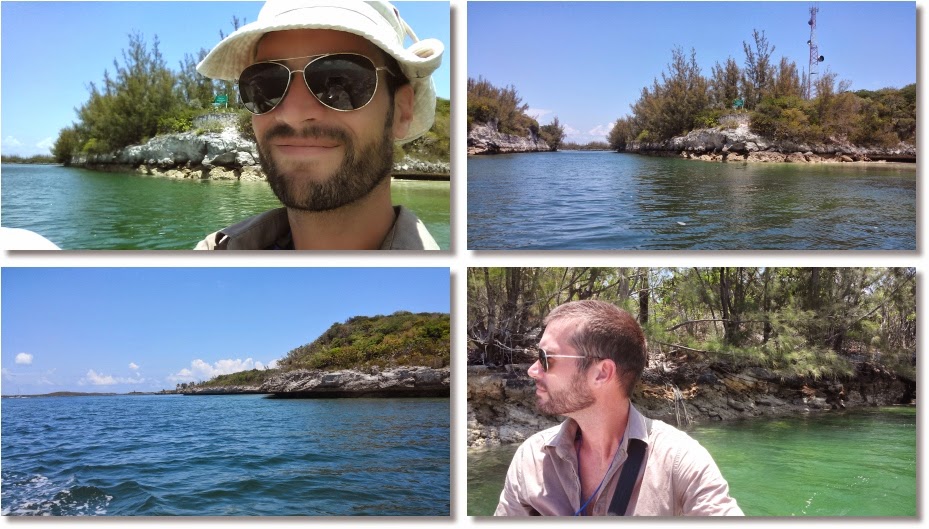 And just off its beaches was the remains of a twin radial engine aircraft, pointing hopefully towards the airport just ahead on the main island. 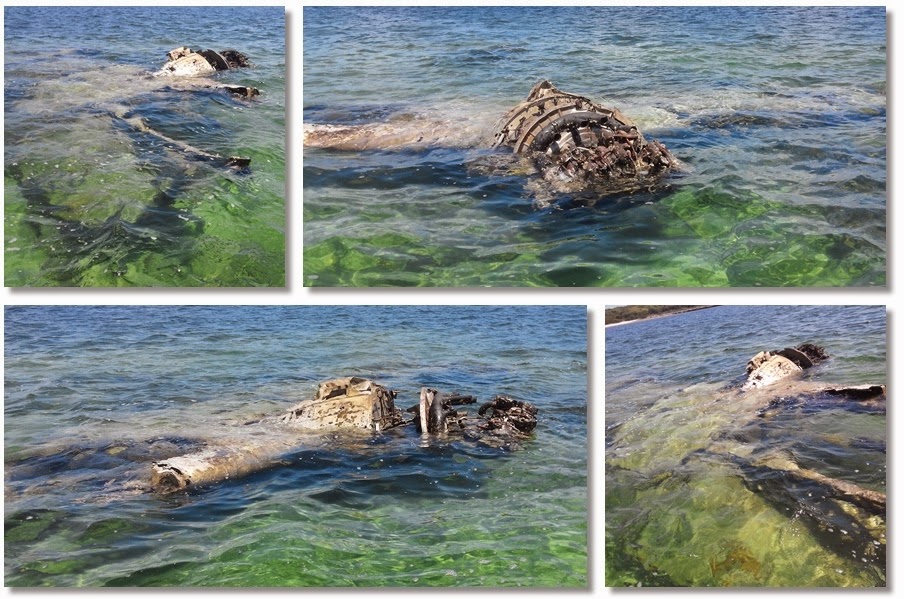 Life and locals were laid back and helpful in Bullock's Harbor.  We never walked the entire distance to anywhere, as we were always offered a ride by a passing local.  A couple days later though, we were already itching to see more of the Bahamas, and so decided to move on.  We hadn't really fully investigated the charts of the Berries at that point and had unresolved plans for the future.  We decided to drop back into the little harbor between the Cruise line islands to consider movement for the next day.  Since we were headed back by the cruise liners again, we decided to be more prepared than the last visit.  I had seen the memes and amazon reviews on a book that has now become famous: "How to Avoid Huge Ships."  It has been mentioned in articles by the NY Times, Cracked.com, and even Jimmy Fallon's Do Not Read list.  Due to its new-found internet fame, this slim paperback now sells for well upwards of $100.  My small library of random reference books onboard happens to contain a 1993 published copy that we found on the boat after we bought it. Mine is in perfect condition, perhaps because I've never needed to reference it...  until now.  We thanked our lucky stars that we had expert ship-avoider Captain John Trimmer on our side, his prose guiding us around these dangerous beasts.  But since they lay like sentries on either side of our harbor entrance, we were forced to make a close approach.  We have heard that the Big Ship's only natural enemy was the Pirate, and so I tried adding some new camouflage techniques not described in the book in order to reverse the roles and get the Big Ships to avoid us. 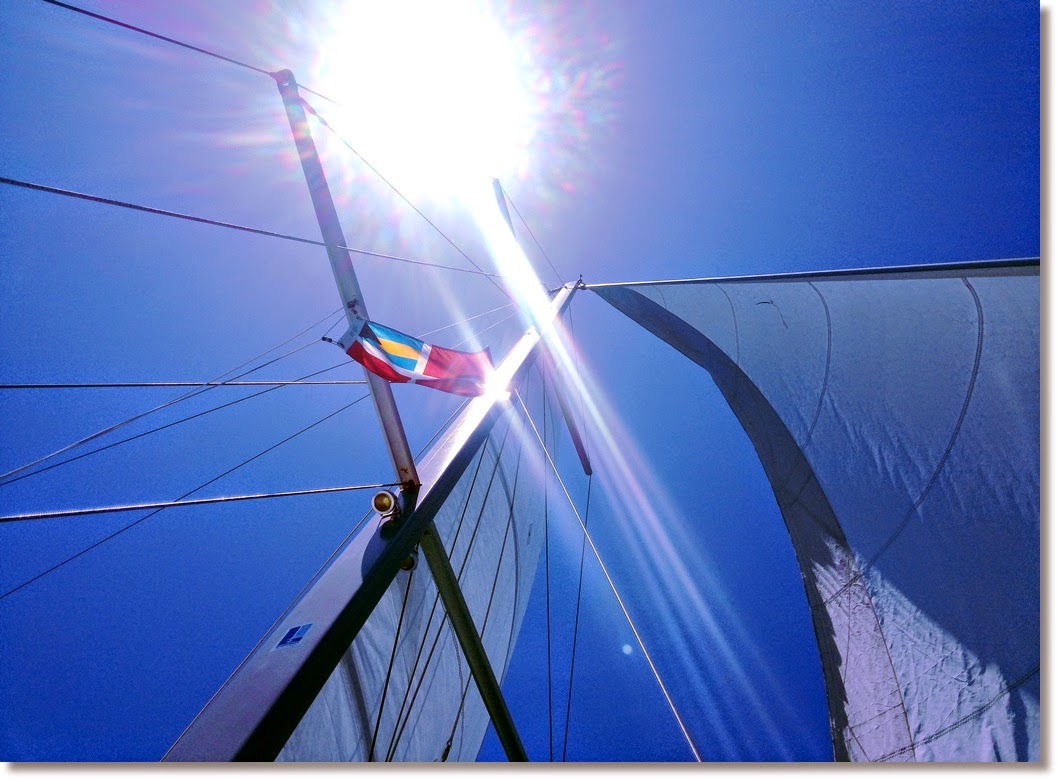 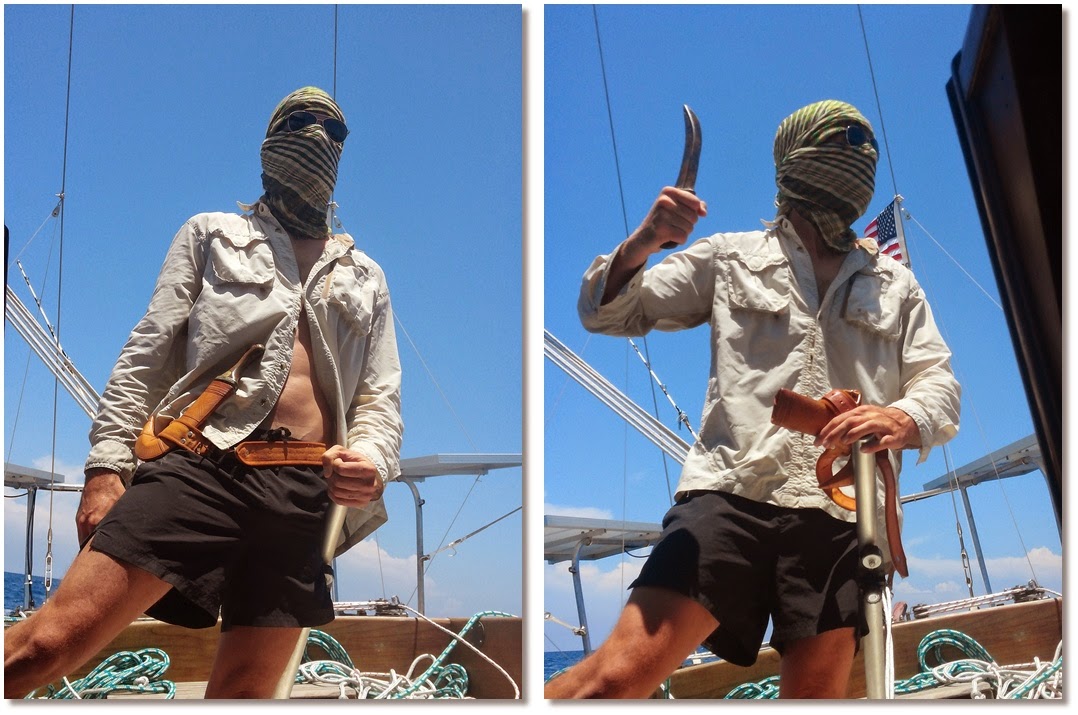 That evening we got to creep on a new group of drunk, sunburned Americans stumbling about a manufactured paradise. Clint requested we push further until at least Nassau and I conceded. But not before catching a few conch! 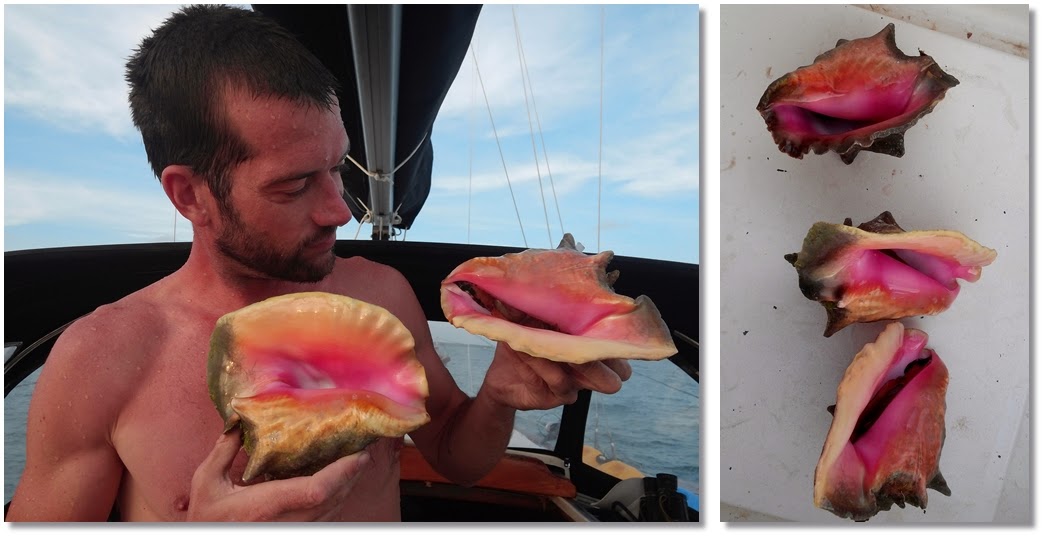 A conch is a very large sea snail that is native to the Bahamas and Florida Keys.  All you have to do is find them and pick them up!  It has been overfished and is now protected in the Florida Keys, but it is still plentiful and tasty in the Bahamas.  When removed from the shell and skinned, conch flesh is white and sweet, but chewy, so must be tenderized before the usual flash fry with a bit of breading...  basically a sea snail schnitzel.  It chews a lot like good fresh fried clam strips, but tastes even better.  We were on a swim to Little Stirrup Cay to do some "light trespassing" near evening after the cruiseships departed when we each saw a conch.  A quick dive and we were both swimming back to the boat to drop them off when we spotted one more.  Three conch in a quick few minutes!...  I can only imagine it is because no one dives this little anchorage in between two tourist-trap islands, because no one anchors here, because it is between two tourist trap islands.  I even caught a fourth, a King conch.  It is a different species that apparently is no good to eat, but has a beautiful brown and tan stripe shell. 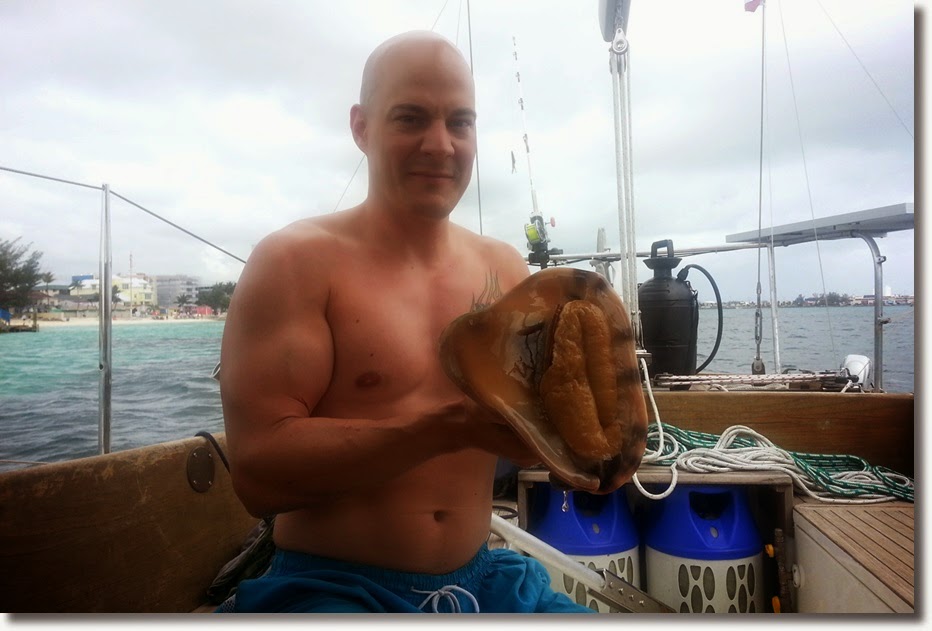 With our conch in a bucket in the cockpit, we set out the next day, this time rounding the northern tip of the Berry Islands to the east before turning south, to follow the chain's many cays en route to Nassau.