The Point of No Return

The next step in the process of making our boat leak free was stripping the decks of all hardware so they can be sanded, patched, and painted.   Most of the hardware leaked, and the deck is covered in hundreds of tiny holes that seep moisture.  The holes are from the screws that used to hold down teak deck planking.  We are having the decks and cabin AWLGrip-ed in the same Oyster White as the sides of the boat. After much deliberating we chose it because it's a two part polyester urethane top coat, with a two part epoxy primer.  It will provide a hard, watertight seal.  It's tricky and should be applied by professionals.  The decks will be sanded, prepped and AWLGrip-ed by Danny's Boat Restoration, who already did our topsides and boot stripe.  Danny does excellent work at a very reasonable price.  Plus he's been very accommodating, and he employs incredibly fast workers.  I don't know how they do it.  They must be impervious to the Florida sun.  After this, the boat will be continuous AWLgrip from waterline to waterline.

The little holes in the deck are the black dots.  There are exactly one million of them.  We have been sanding off the raised anti-skid grid because there are precisely one billion tiny chips of paint in the indention.  Do not question my counting skills. 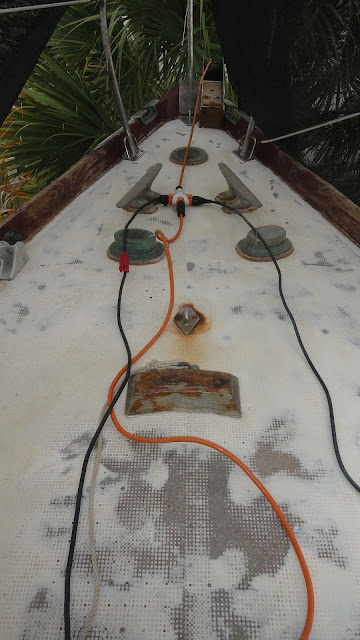 AJ and Darrin removed hardware from the bow.  AJ had the shittiest job, suspending himself inside the sweltering anchor locker with a series of wrenches, holding the backing nuts.  Our friend Sailboat Trash had the next shittiest job, using crappy Chinese Harbor Freight tools to remove age-brittle screws and bolts from of their 40+ year hiding places while baking in the hostile Florida sun.  Thanks to Sailboat Trash's unexpected arrival in town, I got the least shitty job: standing in the sun taking pictures, listening to inventive and expertly crafted obscenities, and fetching tools and water.  Everything was stripped bow to stern, winches, cleats, stanchions, genoa track, everything. 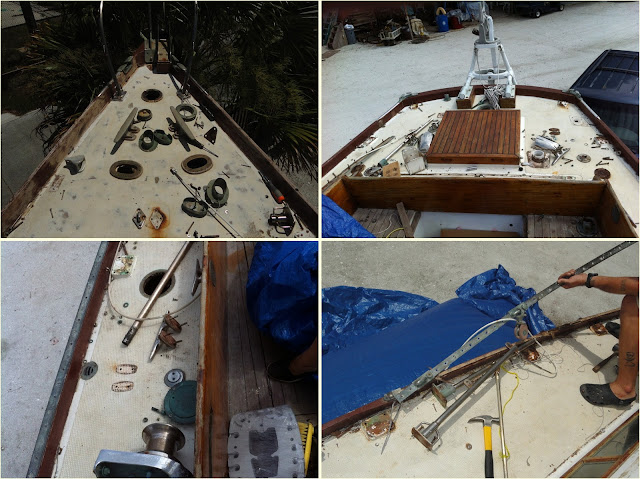 The chain plates were also removed.  The last remaining original plate was not replaced with the others on the last refit because (quote) "it was inside a pretty teak box" ...  I do not care about pretty teak boxes as much as I care about the livelihood of my rig, and its owner. It's pictured from the inside in the bottom left.
The one in the bottom right was only a year old when it came out, but it was somehow composed of mostly rust and a spiderweb of cracks.  That one was in the closet. 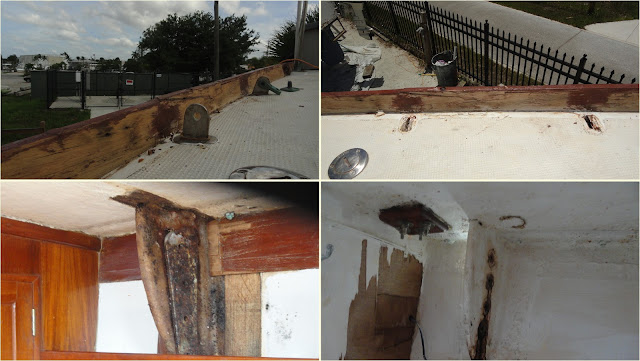 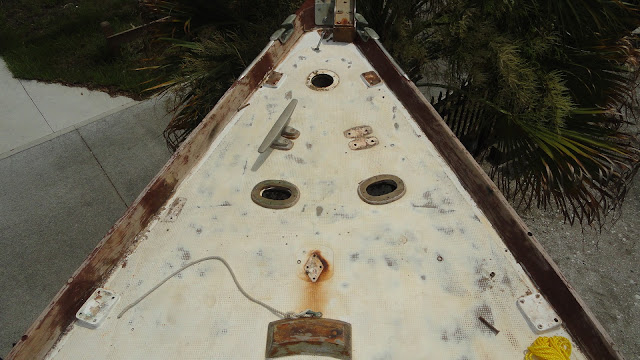 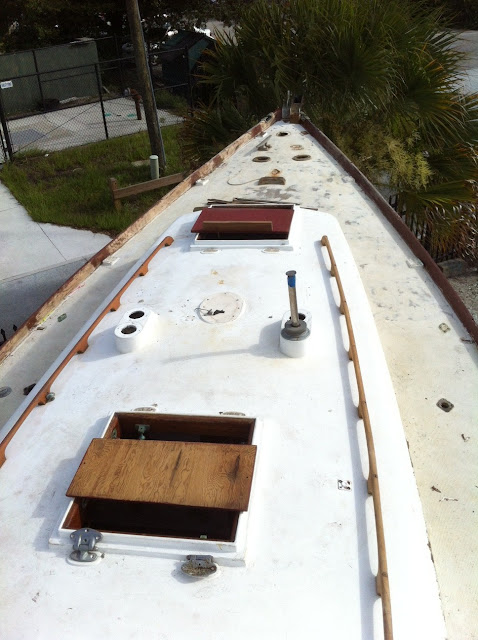 The engine room and cockpit lockers are now also stripped bare.  All separation panels, wires, turning blocks, and superfluous fiberglass pieces are now gone after hours of grinding, chiseling  and suffering clouds of fiberglass dust in a suffocating airless pit.  There really are few things worse than dust that's made of glass.  Millions and millions of microscopic glass splinters all over your body.  Danny is also going to epoxy barrier coat (Interlux 2000E) this room and the bilge.  We are making new panels out of mahogany ply wrapped in fiberglass that will be glassed into the boat to separate the engine room and cockpit lockers.

And now we come to the project that gave this post it's title.  The toe rails.  We have been in a state of analysis paralysis about them for two months.  The paralysis came from figuring out how best to strip them, salvage them, re-caulk them, re-fasten them, re-plug them, and refinish them.  But they are 43 years old, cracked and pitted, and leaking through many of the bolts.  They have been salvaged a few too many times already.  We were hoping to be able to save them one more time and replace them some other time in a more pleasing locale.  But seeing as we are stripping everything else from the decks to "fully" seal the boat from leakage and stop current deck rot from getting any worse, we decided- with a sigh of resignation - they had to be done now with everything else.  Trying to save them would take more time and effort than removing them and just replacing them with new wood.  We'd have to razor blade the old caulk out, add new, pull all the plugs and bolts, and add new, strip the paint, and add new...  When you give up on saving something and instead commit to merciless destruction, the job can get done fast.  In our case, fast enough that is is actually cheaper to replace rather than salvage and reuse the wood due to days on the hard saved.

Making that first cut is the hardest because once you do, there's no going back.  Our plan was to use a metal blade on the recip-saw to cut both wood and bolts at the same time and then just drive the headless bolts through the deck into the boat.  No need to bother removing a couple hundred remotely-located nuts from the underside.  Yet only inches into the first cut on the rail, the first bronze bolt burnt the teeth right off the first blade we used.  It was the blade that came with the saw so that was expected, but we were not sure how many blades would end up burning by the end.  We tried an abrasive blade made for cutting iron that worked pretty well, but was slow going.  Then switched to Ace brand titanium tipped metal blades and were able to run it down the length of the toe rail with little hesitation at the bolts and used only one blade in the process.  I was amazed, and very relieved that we didn't REALLY screw ourselves into an impossible task.
Sailboat Trash returned for another day of awful work.  Meaning the toe rails were off before noon. Thanks buddy. 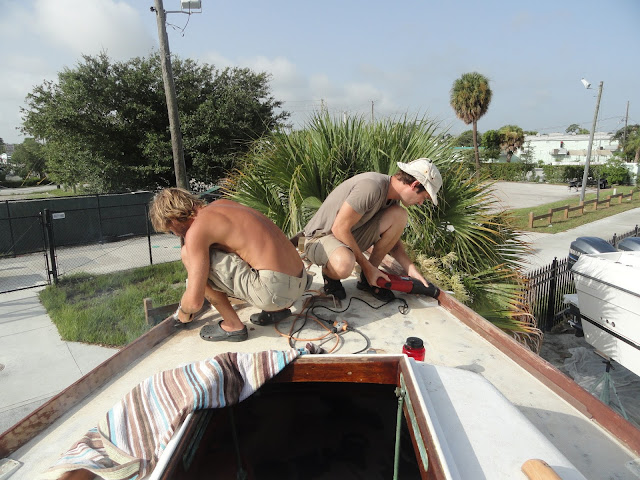 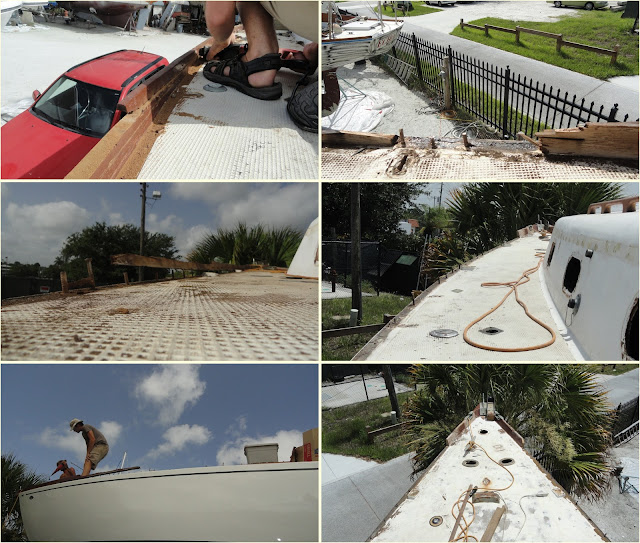 Underneath the toe rails was the same black tar-like substance we've found everywhere else under old wooden trim.  The 43 year old Chinese tar just isn't holding up anymore.  We are going to replace the toe rails with 1 1/2" Mahogany square.  Teak just isn't affordable.  Neither is going taller than 1 1/2 inches.  The toe rails were just over 3" tall, and there is really no need for them to be that large unless they are integrated bulwarks.  All they do is trap water on the decks.
We are going to carefully remove the bow portion and reuse it (we think), so we won't have to replace or alter the bow hardware.  The wood itself is in good shape but it leaks like a sieve into the anchor from underneath.  The stern portion is also going to remain all the way to the original bronze turning blocks.  Will it match? Experiments in color technique are underway now, but the bottom line is we don't know and we don't care as long as it won't leak or continue to rot the deck or bulkheads. 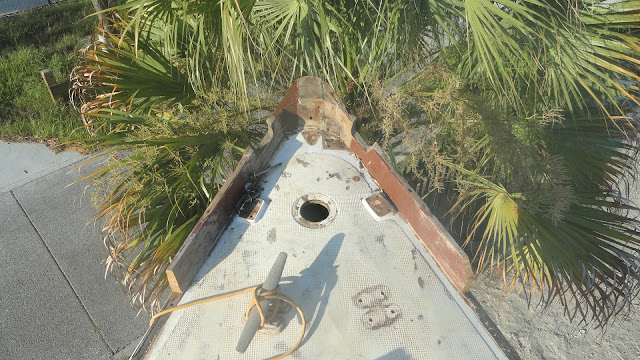 There she is, with only the teak that will remain.  The new toerails will swoop down to 1 1/2" after the bow portion before swooping back up at the stern. 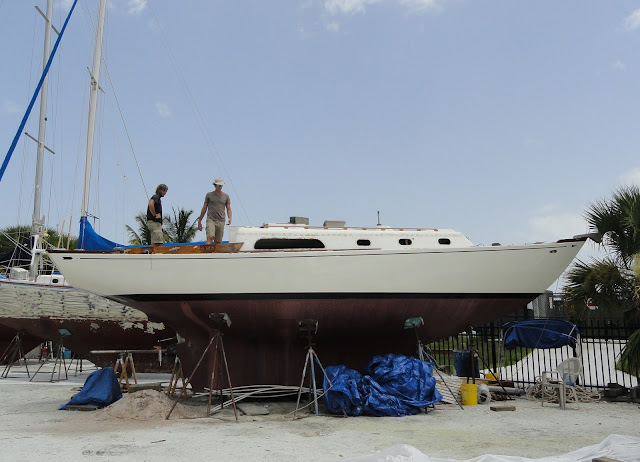 The boat is now naked.  No windows, no hardware, no toerails.  When Danny is done with it, we will re-install the hardware, install the new bronze external chain plates, install new bronze opening portholes (yay!!!), and re-install the hatches.  Well, re-install one of them.  The first hatch came apart rather easily with no damage.  We weren't so lucky with the second one.   The second one had been rebuilt before and the screws were epoxied in, plus they were phillips head screws.  It wouldn't come apart without splitting damage to two of the sides.  So we were stuck, it couldn't be rebuilt, it couldn't be used as it was, replacing the two damaged sides with new teak is pricey, and having a new one built is not cheap either.  If we had a wood shop and the tools and the time: maybe, but we don't.  The problem with hatches is that there are no standardized sizes, you either have one custom made for your boat, or you customize the hole in your boat to fit an existing production hatch.  Ideally, if we could have whatever our hearts desired we'd choose a wooden butterfly hatch.  We asked our wood guy about building one, but he said no.  We asked another local carpenter about having a new hatch built and what that would cost, but he said he'd rather not try.  But - in a stroke of unimaginable luck - he did have a daughter who had salvaged a butterfly hatch of a sunken, then beached boat.   She wanted to sell it, and it was the perfect dimensions to fit our center hatch.  It's beautiful patina-ed bronze and teak and in incredibly good shape. 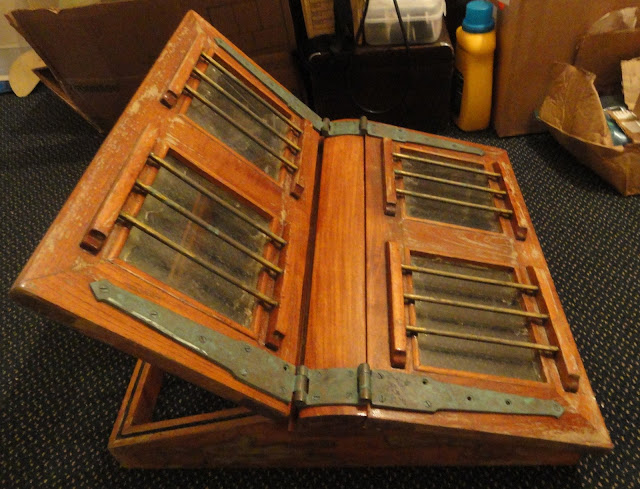 We celebrated the end of the toe rail dilemma with fresh sea food for lunch.   My first crab. I've had a crab cake before, but never a break-it-open-fresh-from-the-bay crab.  Nice to get a little taste of what dinner will look like one day when we are living on the boat in swim-able, fishable waters.  Gotta keep the dream alive. Mmmm. A bit obscene at first.  But...it's gonna be a good life. 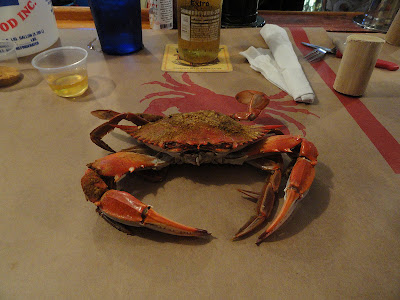 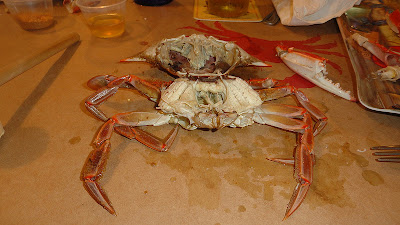