This week it feels like the boat is really coming together.  We laid the first batch of cabin coat, marking the momentous occasion of the first-ready-to-move-into sections of the boat.  A small preview of our living space to come.  Most of the week was spent sanding. The dreaded sanding of so many painted surfaces, and all of the new fiberglassed bulkheads and chain plate fin patches. It was a dusty week.


Before painting the cabin we also had to deal with the area where the liner of the cabin ends a couple inches below the under-decks.  In the cabin it was covered with veneer.  A veneer that was falling off and delaminating.  Behind it is rough dry flaking 43 year old fiberglass.  We originally decided to at least brush it with clear epoxy to reseal it before putting up new veneer, but then decided to use thickened epoxy to just fill the bumpy surface to mostly smooth, sand it, and call it done. No hidden veneers to rot and less costly: win-win... ish 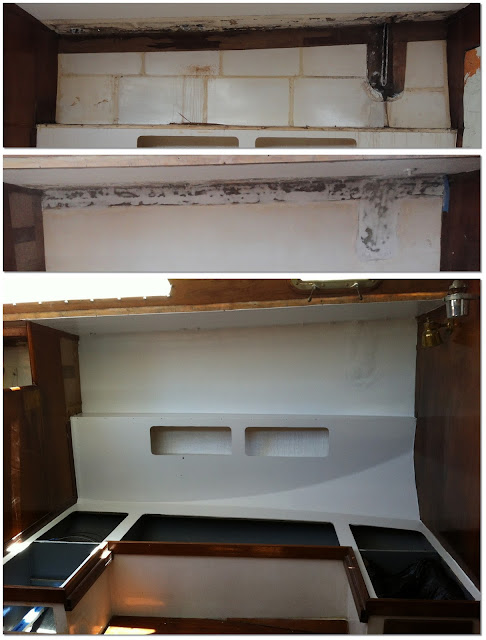 The Dinette is complete!  With 2 new lower bulkheads, a chain plate fin patch, epoxy filler, a kick board patch, and paint.

There was a hole cut out in the kickboards of the fiberglass dinette liner for the old battery bank switch, but we won't be reusing that location. So we filled the hole the same way we patched the hull:  tape on the outside, and a few layers of glass in descending size on the inside.  This too will be painted.. still have to sand and paint the kickboards... 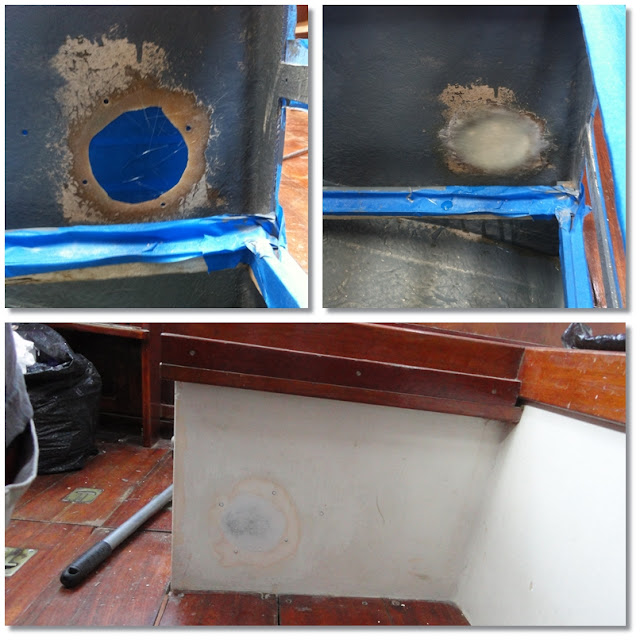 In the v-berth we also epoxy-filled the liner gap.  A few months ago, AJ removed the plank that covered it so we could install the new toe rail bolts. Otherwise it would have stayed. AJ cut all the new bolts and ground them smooth before we laid the epoxy fill. He also sanded and scraped off the chipping paint on the sides back to gel coat. A little ceiling work, and it will be ready to paint! 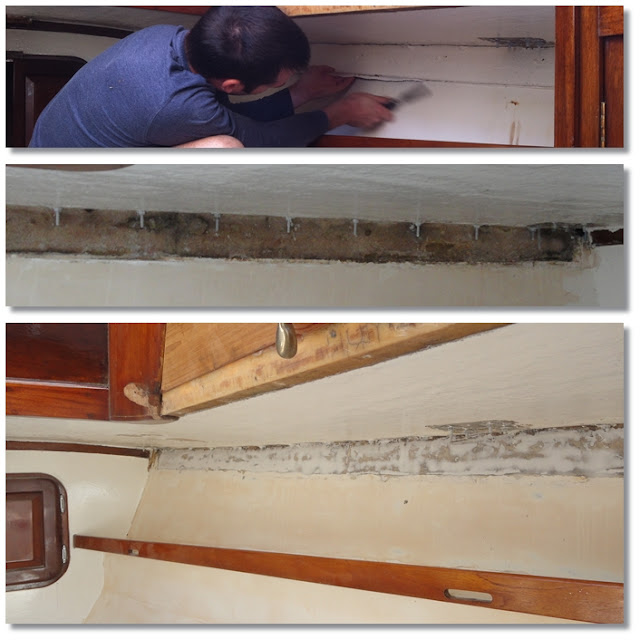 The starboard side of the main salon also got the filler treatment, but since this is plainly visible we made it especially flat and smooth as if it was part of the original mold...  Before we can paint, we still have to tackle sanding all the old stained flaky paint on this side. I'm doing that tomorrow. 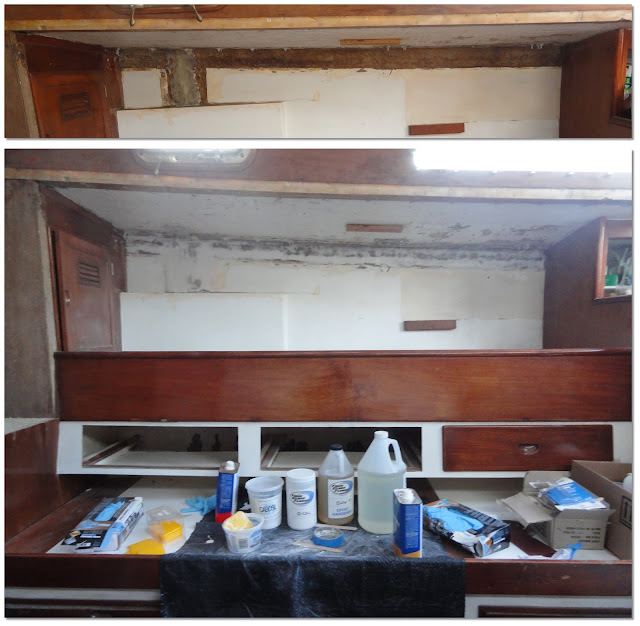 The epoxy was thickened with Q-cell and Cabosil. The first batch on the port side was done only with Q-Cell, aka microsperes, aka glass ballons, which are tiny hollow glass spheres that provide the lowest surface-area-to-volume shape possible, meaning it flows nicely.  Q-cell is so fine it billows away like smoke when disturbed.  It can be a challenge to keep it in the cup and out of the air when mixing.  It is soft and sands like chalk with a power sander and 40-80 grit, making perfect feathered edges easy.  However, it takes a LOT of Q-cell to thicken to a paste, and even if you get it too thick to the point that it is snagging and no longer laying smoothly, it can still sag a little after being laid.  So, in spite of the silky smooth surface, we had some sagging issues, and decided to add a little Cabosil to the mix.  Cabosil is about as light and fine as Q-cell, but it sticks to itself a little more like dry baking soda, and doesn't billow away as much. (Unless you open it outside, the slightest breeze will empty a cup of either.)

Cabosil is also known as fumed silica.  Fuming silica is a process of plasma-blasting glass in an electric arc into tiny jagged particles of silica that have an incredibly high surface-area-to-weight ratio.  The resulting product has virtually replaced pumice in nearly all smoothing/polishing compounds, including toothpaste.  As an additive, besides being a mild abrasive, due to the surface-area-to-weight ratio, it increases the thixotropy (the quality of of anti-sagging/gap-spreading) of the product you add it to....  the point: a filler that is still wet enough to swipe on smooth with no resultant sagging.

You can feel the jump in stiffness by just adding a little Cabosil to the Q-cell batch. The problem is that Silica is hard... so hard that it can be difficult to sand, but it also makes makes the paste easier to pull smooth, leaving less sanding afterwards anyway.  We ended up mixing about 10%-15% Cabosil and 85%-90% Q-cell for optimum results.

The closet is also finished!  I sanded the new bulkhead fiberglass seams for hours and hours in that coffin-sized locker, then I smoothed the edges out with thickened epoxy, then sanded that out smooth. Then painted!!  I love that closet. It's the one feature that keeps me feeling civilized. A place to hang things. Not a place to dig for things. A single normal convenience. I can hang foulies and a couple sets of scamouflage. (For when we need to not look like a dirty, homeless bums.)  I don't care how small it is, it's enough to take the boat from survival travel vessel, to home sweet home.  Until now it's been a rotting, humid, leaky mess.  And now I can hang things in it! Pardon my over excitement, but as I said earlier, this is the first glimpse since we bought the boat of the inhabitable home it will be. AJ is talking about adding an aromatic cedar liner to the sides for humidity and mold control. 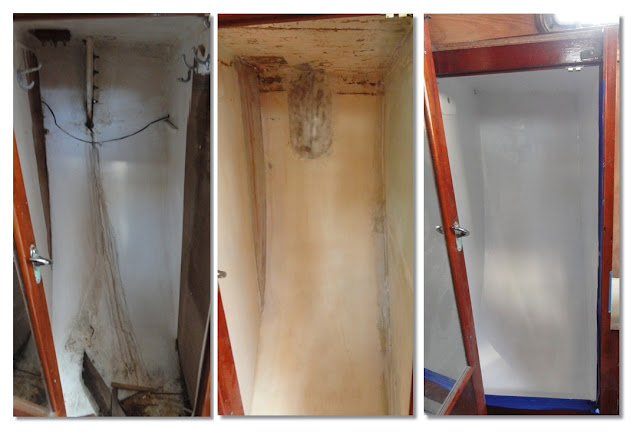 While we were doing all this epoxy filling, we also patched the underside of the decks where hardware had been removed.  When Danny painted, his guys also sort-of patched 3 holes in the deck. One in the head cabinet, and two in the cockpit locker.  They put in a foam core and glassed over the top, but not underneath...?    Since it was upside down and part of the deck structure, we used the zip-lock bag as an icing bag trick and squeezed epoxy thickened with about 50% Cabosil (for thixotropy) and 50% cotton flock/milled cotton fiber (for strength) around the foam and glassed over the holes with two layers of biax. 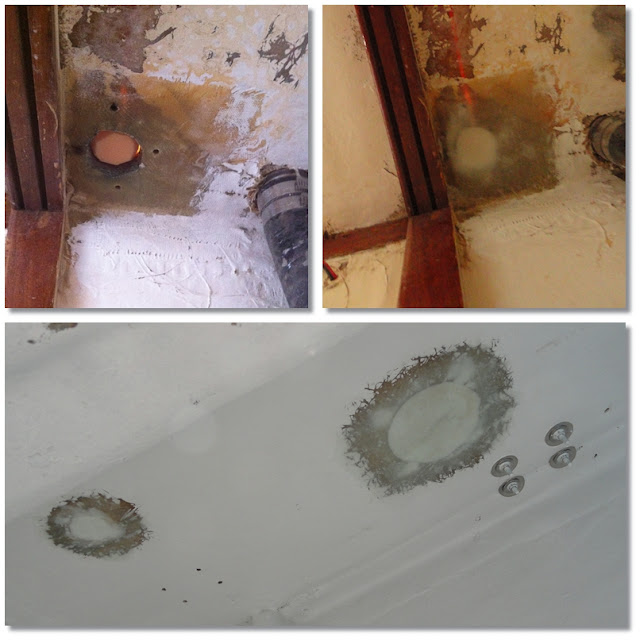 I think this marks the end of fiberglassing.  I know we'll pull out the epoxy again for some reason.. but I can't think of one at the moment!   (oh wait...)

It feels like everything is happening all at once and we're on a mad dash to the finish line. We're trying to finish out the cabin so we can get off the mattress pad on our friend's floor and move back into our own place, all the while getting together the final parts and time we need to stand the rig. As soon as we get the bolts, we'll put on the chain plates, stem piece and chock cleats. And soon we'll start building the mast support, (the wood is cut!) but the toilet has to be removed to access the base... fun times ahead.  At least we will be installing a new bronze Groco head when we finish the job. The 43 year old bronze head did not hold up, even after two rebuilds in two years.

When the cabin is done and the rig is on, we get to turn our attention to one last project - the disaster of a water tank and surrounding subfloor.  That means taking out the floor boards and floor beams...  should probably refinish the beams while we're at it...  and the floors could really use a refinish too...  I just keep thinking of more things we have to do.  But, the difference now is, I actually can think of all the things that need to be done to finish the boat.  It's no longer an abyss...   it is now more like a mountain.  But we're above the treeline, and that feels pretty good.