Everything is in flux and happening so fast that I haven't had any solid thoughts or plans to pin down in a blog post! The season is coming to an end soon.  We have to decide what to do with the rest of it, and where we want to end up for the summer/hurricane season.  The circumstances directing our decisions are as follows.

1. We don't want to stay in Stuart because we finally have the option to move.
2. We don't want to sail off into the sunset for good until I get shoulder surgery.
3. Summer/hurricane season is the best time for surgery since we'll probably need to sit it out somewhere anyway.
4. Florida is a long way from Arkansas where surgery and family are.
5. Texas is much closer to AR. We have friends in Texas. Friends and family from AR can visit us and see the boat in TX. And AJ day dreams about helping his friend in Texas design and build a Meadery and underground aging vault in his back yard for his upstart brewing company.  AJ has already drafted plans for it all...  it's what he does to decompress.

While discussing the pro's and con's of moving the boat all the way to Texas, AJ got a message from his high school friend, Clint, who has been working overseas for the last few years.  He's coming back to the States, is between jobs, and is also headed to Texas.  Clint is the world-travelling adventurous type, he's been to Thailand, Cambodia, Malaysia, Brunei, Qatar, Lebanon... most of the Middle East, and all of Europe, so AJ asked him if he might want fly to Florida and sail to Texas instead.

To which Clint replied "What are our chances of dying? Because I'm willing to accept 1 in 5." After hearing that it would be much safer than that, he expressed his disappointment and suggested bringing along live scorpions or poisonous snakes to make it worth his while, but eventually agreed. He will arrive in two weeks!  Clint emphasized that he has no timeline so instead of hauling ass straight to Texas, we're going to the Bahamas for a couple weeks first.  And on the way to Texas we can stop in the Keys, the Dry Tortugas, see my cousin in Panama City, and Clint asked if we could stop in New Orleans, so New Orleans here we come!

Over the next week we will clear out the shed, fully pack ourselves onto the boat and get off the dock.  We already have a buyer for the truck and it will be sold Thursday!  After that we can start moving south towards Fort Lauderdale, pick up Clint, and prepare to cross the Gulf Stream to the Bahamas.

Over the past couple weeks we've been trying to finish the cabin and systems. We've had so much rain and wind recently that we just gave up on cutting, varnishing and painting shelves. I think we are going to save major cabinetry and shelving for Texas, and just pack up the boat as is for now. This week we will beef up the rig, by adding a forestay and two aft raking side stays to add additional stability to the center of the mast and prevent forward/aft pumping in heavy seas. We installed two water bladder tanks and the pressure water system giving us 50 gallons of fresh water. And AJ will plumb the propane this week.

AJ attempted the propane set up last week but when we took our canisters to get refilled we were informed that our model had been recalled and the company that made them had been shut down. The glue that was used dissolves in propane. Luckily we were able to get a refund from the retailer very quickly.  But we had to find new propane canisters. We found an amazing deal that I figured I'd share in case someone out there is also in the market for propane canisters.  Ragasco USA is selling 17lb canisters for $65 right now! They are made in Tampa, and were able to deliver to Stuart in 24 hours. They are much sturdier than our old ones, and they're rather attractive don't you think? 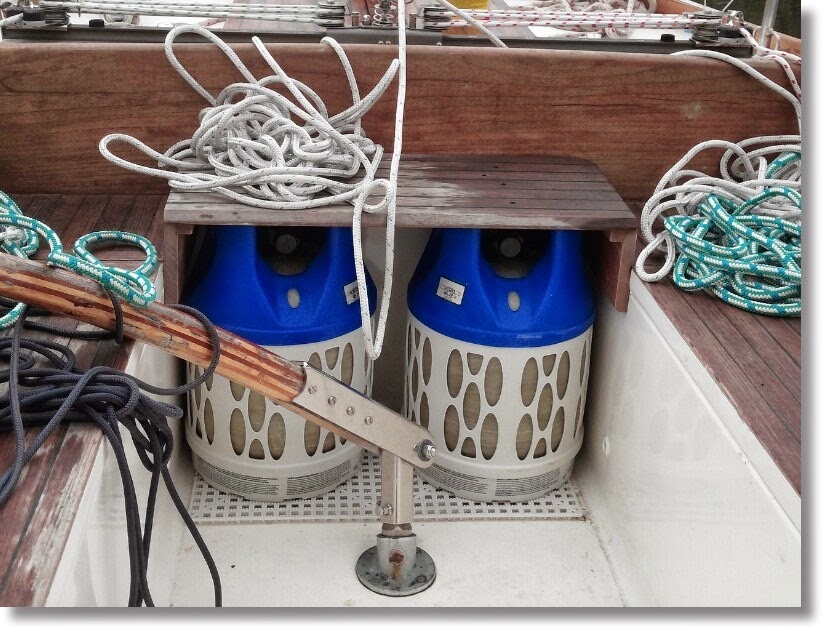 I spent yesterday going through our household goods. We don't have nearly as much stuff stashed away as I feared.  But the clock is ticking and I've got to go get the boat ready to move it all on! In spite of the thunderstorms.