The next day turned out to be one of the most rewarding days of my life.  We had asked for another ride into town so we could do some shopping, and sure enough, Murphy and James were there waiting for us.  While driving us to small shops around Nicholls Town to run our errands, we got to talking about how I got into sailing by building small wooden boats with my father.  Murph told me about his uncle, Bulla Murphy, or "Bulla" for short, a wooden boat builder who was finishing up some boats for an upcoming traditional Bahamian sailing regatta in the harbor at Morgan's Bluff.  I was excited to find out this old fisherman had an older-yet uncle who had been building wooden Bahamian racing sailboats by hand for decades.  So he offered that I meet him as he lived just around the corner from his house.  A few minutes later I had bags full of Murph's incredibly tasty home-grown bananas and devil peppers, courtesy of his wife, and was on my way to meet the most-interesting-man-on-earth-that-no-one-has-heard-of. 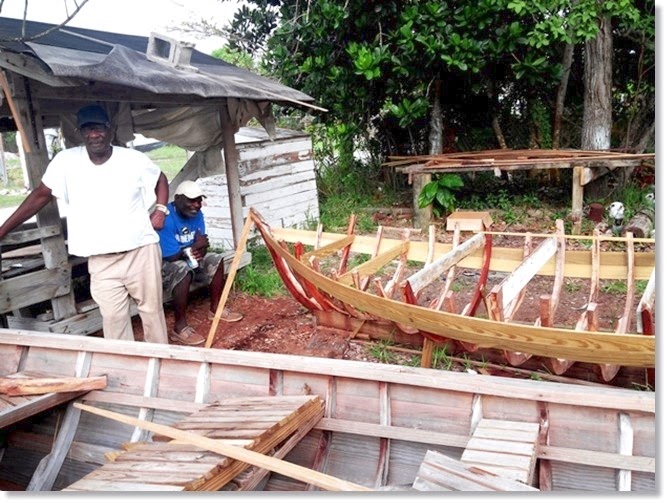 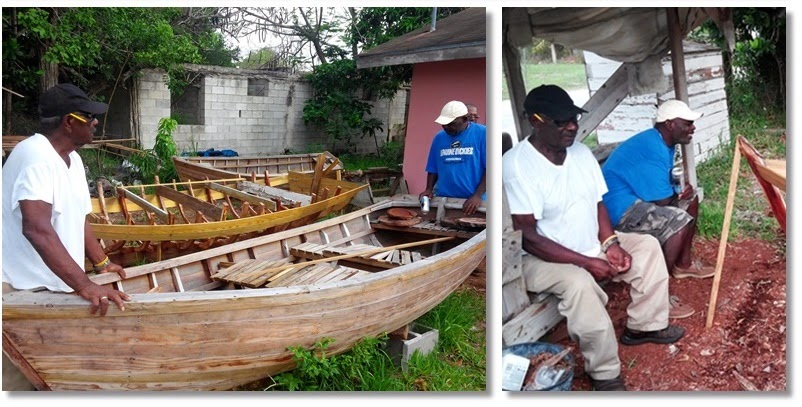 Bahamian sloop racing is a centuries-long sailing tradition based on designs that haven't changed much in that time.  Bulla keeps the tradition going with his work.  The stem and all frames are made of mahogany roots and branches, hand worked with chisels and a draw knife to keep the curving grain of the pieces aligned with the curve of the hull, eliminating the need for steam bending frames.  I asked him if I could get some line drawings or some sort of plans for the hulls, and he told me he didn't work like that.  Instead Bulla envisions his desired hull shape in his head, translates it into frames by selecting wood and handworking, puts it all on a backbone, looks to make sure he likes the shape, makes final shaving adjustments to the frames.  Then he decides how many planks there will be per side, measures the edge length frames, divides the measurements by the number of planks, and that gives him the offset curves for the taper of the planks.  No real plans are needed... just the ability to visualize a hull and produce framework accordingly...  then planks are adapted to the whatever frame given arrangement.  I like the method so much that I want to give it a try for our next hard dinghy, but I'm going to design the frames in a 3D CAD program first to ensure fair curves because I lack 40+ years to be able to do it in my head.  We use the resources available to us.

The surfacing on the plank side of the frames was excellent with the appropriate taper for a nice plank joint on each frame, but it was all raw bark and rough cuts on the backs and sides of the frames, because, as Bulla said: "That's not the side that's used" 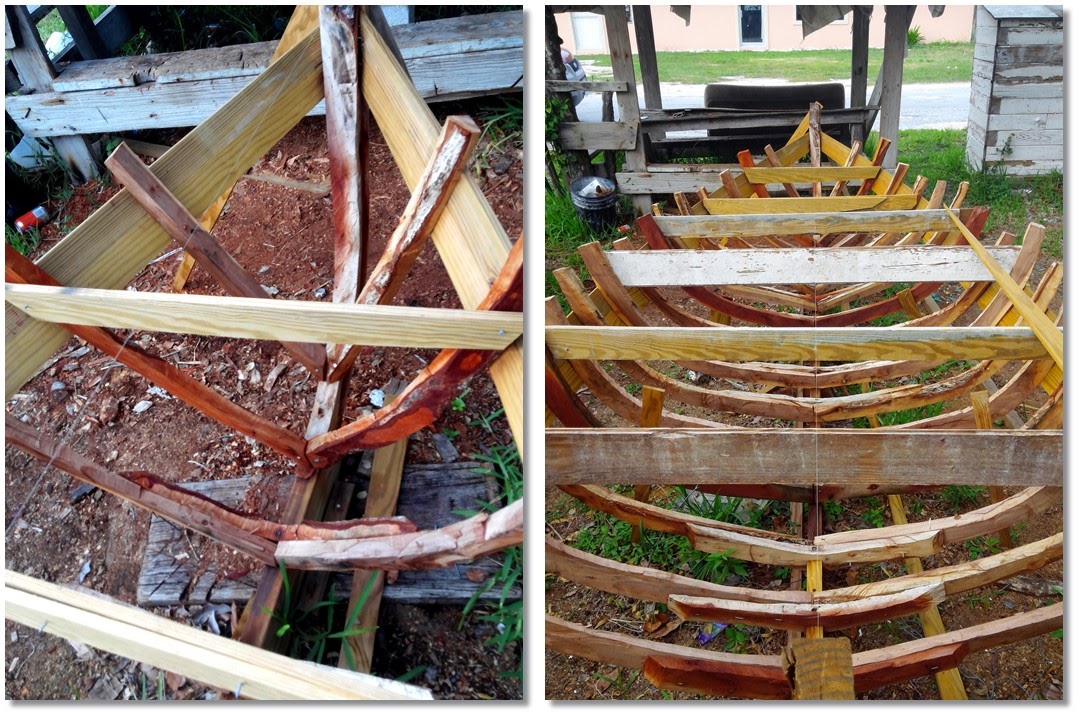 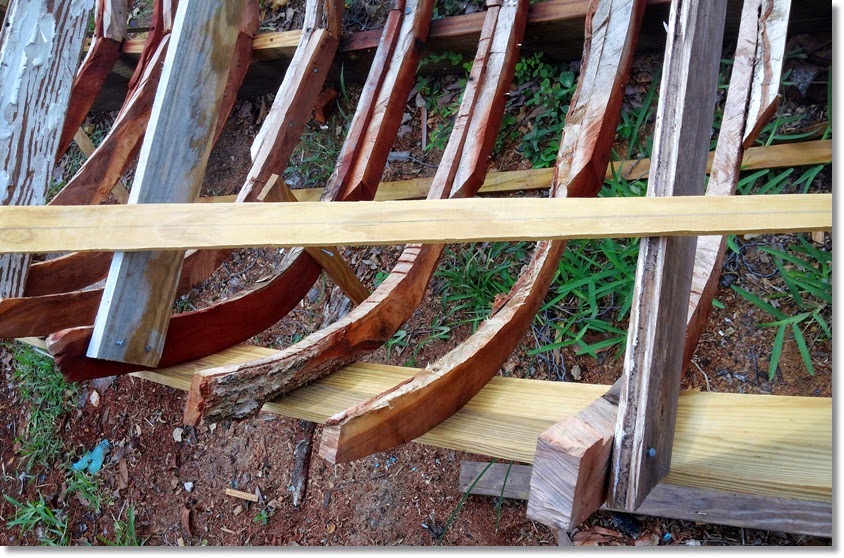 He had many 10-14 foot small boats out front, and was working on a 22 foot ballasted boat out back that was not yet in full frame-with-backbone.

Some of the boats were for a local regatta being held in the harbor at Morgan's Bluff in July (at the time, next month).  I wanted so badly to see the races, but we had to head back to the US.  Bulla was experimenting with some chop strand fiberglass and polyester resin on the bottom of a couple boats to see if it would be better than the usual sealant: paint with chalk mixed in.  I don't think it was.  I imagine the flex causing a rigid surface to break.  I would want to try 5200 for all frame-plank joinery, and then a thin flexible cloth skin joined with 5200 on the outside. 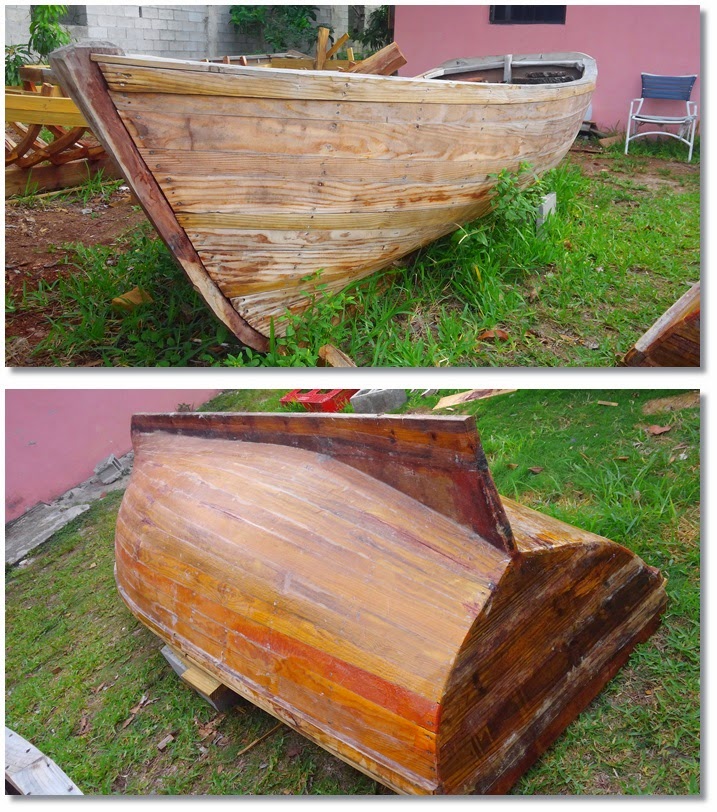 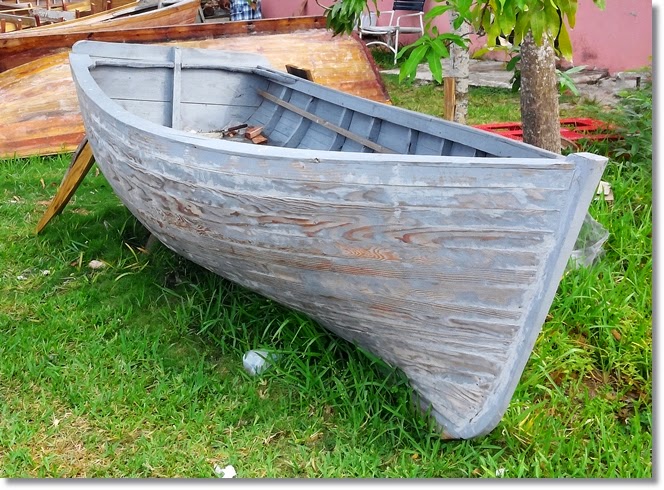