Life After Nassau: Andros and beyond

It is a short crossing from the west end of New Providence to Andros' northernmost point, Morgan's Bluff, but it is over a deep ocean trench fed by competing tidal currents, which, I had read in the guides, can make for rough, unpredictable seas.

Instead our crossing was met with with a looong shallow swell with a steady SE wind for fast, easy running reach.  At first I thought there was no swell, just a glassy sea, but Robin would shift ever so slightly and "surge" in speed by a quarter of a knot on a regular 15-20 second rhythm.  I honestly couldn't figure it out at first until I noticed the slight undulation across the water surface, about half a football pitch between peaks, and probably less than a foot in elevation difference between peak and trough...  still basically glass, and with enough wind to keep us kissing hull speed the entire trip.  "I bet years will go by before I see another sailing day as nice as this one" I thought.   I was right in a sense, but only because the next comparable sailing moment, barely a week later, was not day but night.

I forgot to mention that on the last day in Nassau our inflatable dinghy managed to ruin itself on the stern of the boat, taking a hard wave into the windvane rudder.  This resulted in an instantaneous four inch gash in the dinghy, and much clamor to save the rapidly sinking outboard.  It must have slipped my mind because our replaced-daily duct tape patch was sooo classy and well executed... 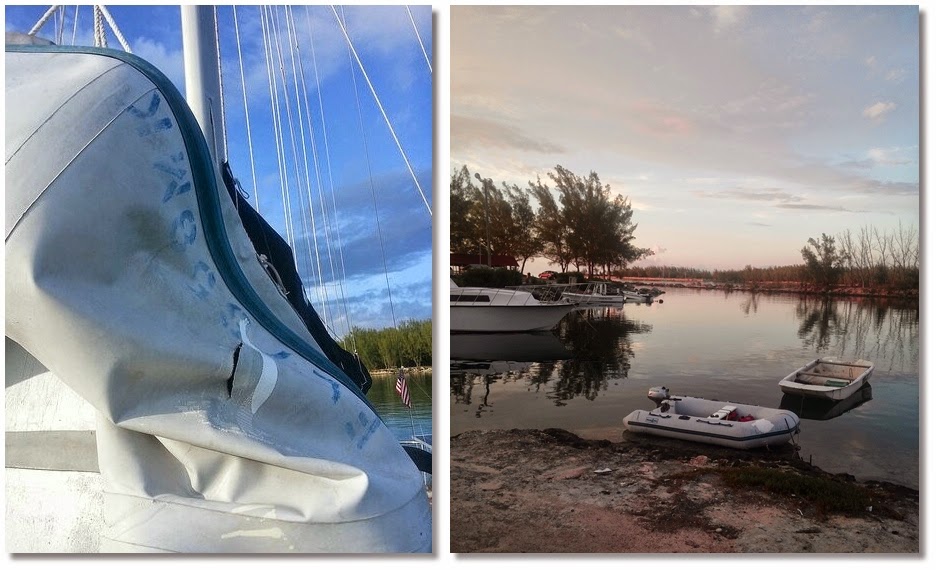 I was reminded when I recalled our first night in Andros: a closed bar at Morgan's Bluff and a hankering for WiFi meant riding to Nicholls Town in the dark, a 12 mile back and forth slog, in a sinking dinghy with a 2hp outboard and a half-broken foot pump (Hey Clint!, I can hold the billows pump skin closed just enough with my fingers while you stomp on them/it with your foot and we can get a little air into it!)  We pulled the floppy dinghy on the sand in front of the only bar that was open, which also happened to be the only wifi hotspot in the town.

Andros is not much of a tourist spot, not even for the sport fishermen who frequent remote islands of the Berries.  The northern settlement of Nichols Town has a "resort" but not the sort of resort an American would expect: more of an old colonial home on the water converted to a bed and breakfast with a tiki bar out front. 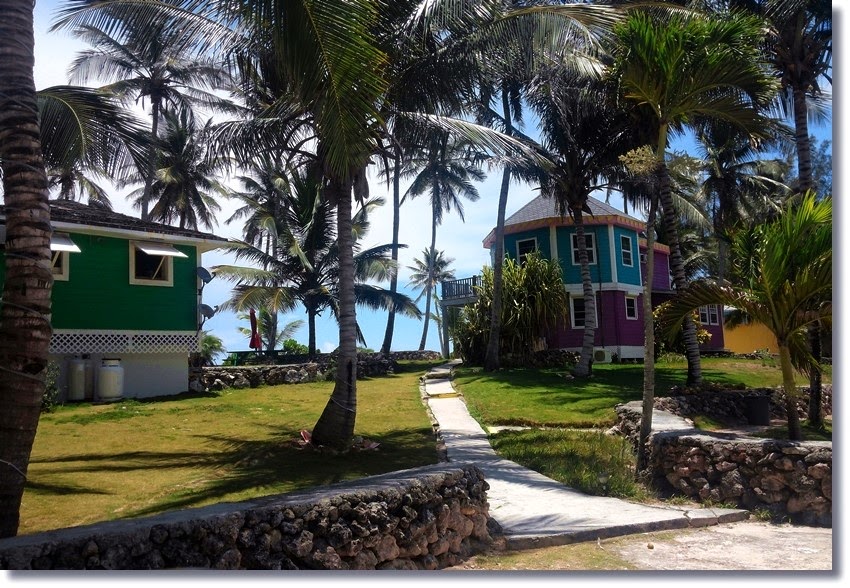 A hundred yards to the right down the beach were the locals' grazing spots: wooden shanty shacks with skilled cooks cleaning and frying up fresh conch served with cold beer.  Robin was anchored very safely in the harbor about five miles north at Morgan's Bluff.   There was a large and excellent bar and kitchen at the bluff, and our first day we got into town by asking how to get a ride into Nicholls Town.  No taxis on the island meant everyone is a taxi of sorts, and the bartender put in a call to a friend, James, who turned out to be a well-dressed, middle-aged classy cat who wanted nothing more than a couple beers at the end of the ride.  We ate conch and had beers and chatted with locals on the water front. 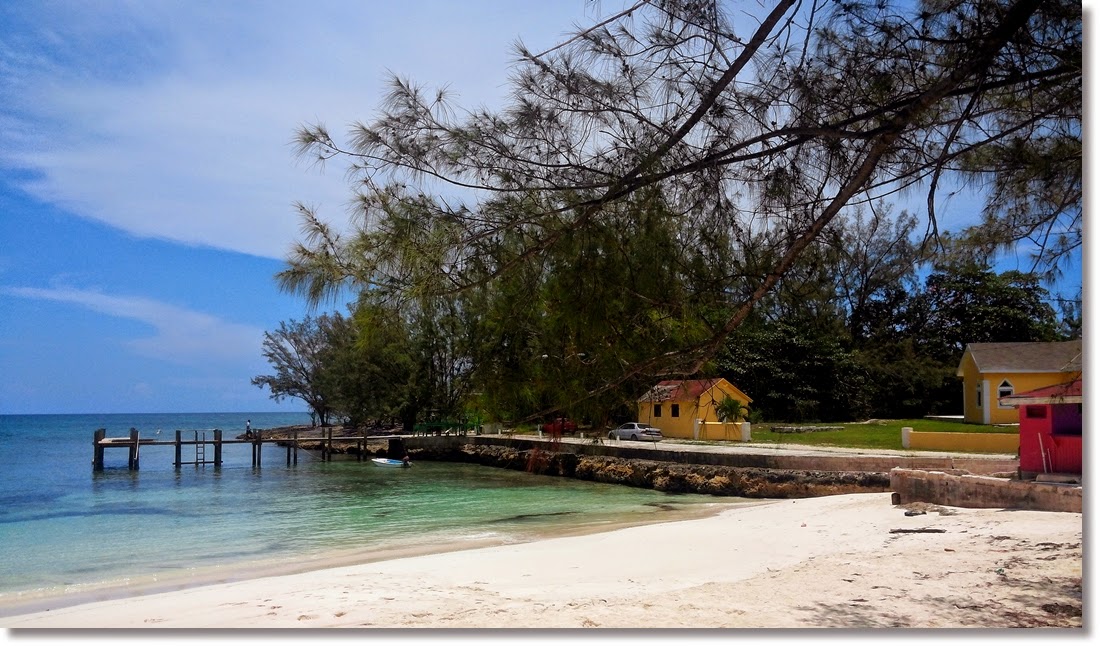 I felt at home on Andros.  I could see the selling the boat, buying one of the small farms/plantations and just letting the slow life take me into the sunset.  Clint and I grabbed coconuts for our rum drinks from the trees on the roadside on the way home before another local girl picked us up on the side of the road and spared us the remaining 3-4 miles walk.  She had already heard about our arrival and knew of Robin at anchor in the harbor at the bluff.  Normally this taxi-less and news-travels-fast sort of behavior would worry me and maybe seem sketchy, but I never got that feeling in Andros.  They seemed happy to have visitors and meet a new friend.  So after our first real day of exploring, we were dropped off back at the bluff around sunset with a load of coconuts, prepared to sit and drink on the boat, only to find out that the bar was kicking that night.  That morning's "taxi-driver", James, was there, so we sat and had a few more beers instead.  We started to talk about our fishing and eating adventures: snails, crab, conch, permit, etc, and he called over his friend, Murphy, or "Murph",  an older fisherman who had eaten nearly everything in the sea.  We all sat and talked late into the evening about fishing and cleaning techniques, edible species, and of course, tall tales of insane fish.  In the course of the conversation Clint asked about the fields of massive purple sea urchins on the rocks around the harbor entrance, and Murph assured us that they were edible, so we added another must-have to the carnivore checklist.  Murph also promised us some of special peppers and bananas from his garden, and they both promised us a ride around town then next day.

The day before leaving North Andros, we made time to collect and sample some of the sea urchins at the entrance to the harbor.  A quick look in our Cruiser's Guide to Fishing (Buy a copy!) showed that urchin spines can be easily hacked off with a knife and the hard outer segmented carapace can be relatively-easily split down the middle!

Yeah... the first one got tossed, because when we cut it open, it shocked us so much that Clint said he didn't expect his food to look like anime.  We had to do a more exhaustive internet search for the anatomy of a sea urchin, and more specifically, what was good for the eating.  Urchins are a radially symmetric ball (along the vertical axis) with five partitions.  Imagine an orange with five perfect slices. Each partition has a SERIOUS human-child-size serrated hard enamel tooth on the bottom stomach entrance.  Use a spare beater knife or machete to split it open.  Out pours the anti-freeze yellow liquid.  Attached to the glo-white serrated teeth are five pulsating translucent neon purple gut sacs full of little neon green balls running up the middle, and five neon orange filter mechanisms that look like porous rooster combs are at the top of the sacs.  Around the outside of the guts, stuck to the carapace, are five gray "muscles" that control the movement of the spines (impressive to watch!), and can be scraped off the inside of carapace with a spoon and eaten raw.  Apparently so can the rest of the urchin, but I didn't have the stomach to eat 1980's deco art.

It was a lot like oyster with a rich, briny flavor, but had the consistency of raw liver. Not sure what I would do with the lime-peel sized portion of "meat" other than serve on a cracker or toothpick with an olive or add it to an olive and/or cocktail onion on a skewer in a dirty-seas martini. (The Dirty Mermaid? The Fisherman's Wife? A Spiny Martini? The Street Urchin?) or maybe in a Clamato-based bloody mary with a sprig of parsley... can't come up with a catchy name, but I bet it would be tasty...  (alt opt: t=n)  ... would sell at a tourist beach bar.

The next day we set out for Miami across the west Bahama banks towards South Riding Rocks to stage for a Gulf Stream crossing.  We knew it would be a ~30 hour voyage, so we split it up into two days.  That first day proved to be better than the day we approached Andros.  The banks are shallow: 8-15 feet for the large majority of the shelf, and that shelf extends for over 100 miles.  We could see the bottom through the crystal clear water and were able to watch sharks, turtles, rays, barracuda, and beautiful coral formations pass just beneath us.  As we sailed late into the night, I was reminded that it was a full moon.  Under the light of the full moon, we could still see fish and watch the moon shadow of the boat pass over the bottom, greeted by the nighttime sailing joy the occasional glow from some bioluminescent creature.  I won't ever forget that night.  It is a pity that such low light situations can't yet be (easily) captured in 1080p HD to share with the world, but on the other hand, that thought crossed my mind that night too, and I got to revel in being in a rich, surreal visual experience that can't be digitally replicated and displayed.  For that particular experience, one must be present, and that isn't an easy task and that level of exclusivity of experience is what I crave.  I was reminded again that not speed, nor comfort, nor sustainability as much as THIS was what Robin was built for.

Anchoring was easy, as just about anywhere will do on the banks, and we capped off the exclusive experience bedding down in comfort and security dead center of the middle of nowhere with a bright moon shimmering off water to the horizon in all directions.