Crossing Back to the US and Sailing the Keys

Clint and I anchored overnight under a full moon in the shallow Bahama Banks, watching fish cast moon shadows on the sandy bottom. It was the last peaceful sight we would have of the Bahamas.   We continued crossing the next morning towards South Riding Rocks, arriving that evening.  South Riding Rocks is a point marked on a couple poorly detailed charts at the south end of the Bimini chain.  A more southern start is better when crossing the north flowing Gulf Stream, so I figured it would give us the easiest shot back to Miami.  I wasn't wrong, but it sits exactly at the edge of the shallows and the beginning of the Gulf Stream.  I didn't know that it was literally an exposed jagged rock mountain top on the edge of an underwater cliff.   Anchored that close to the deep churning stream, just off some "protective" rocks was a nightmare.  Neither of us slept much that night as the boat pitched wildly, tugging hard at the line. The anchor only dragged 50 feet before resetting when the tides shifted in the middle of the night, but in terms of the boat pitching and rolling; there were times I woke up from a dream where I thought I was falling to find I actually was.As soon as daylight came over the horizon, we checked our bed bruises, weighed anchor, and sailed with haste for Miami and away from that place.

Early into the Gulf Stream we caught a just-right size female Mahi that put up quite a fight, circling the boat four or five times and costing us nearly a half hour of gybeing and tacking, bashing the short Gulf Stream swells to hold position.  I helmed while Clint reeled her in and she was served up immediately for lunch and again at dinner. 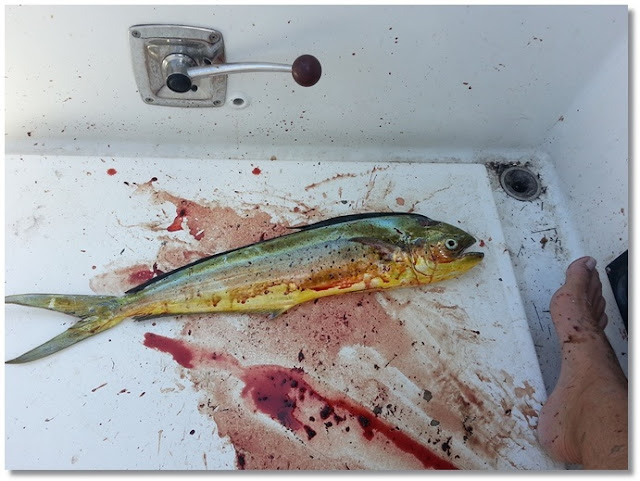 We entered the Biscayne Bay in the mid afternoon under sail alone, pinching hard on the wind to make it all the way up the channel as well.  We finally started the engine when we had to cross the bay four more miles dead to windward with a very large and fast approaching storm.  Halfway across the bay with the storm nearly upon us, the engine overheat buzzer started screaming.  I immediately shut down the engine, dropped anchor nearly dead center of the bay, and rushed below to assess the damage.  Nothing burning, nothing smoking, just a bit hotter than usual.  A clogged raw water intake strainer.  I rushed to unscrew the canister, rake out the muck with my finger and came on deck just in time to find the weather had already dropped ten degrees. The sky was black and droplets beginning to fall.  With only a couple miles left, we hauled anchor, but couldn't outrun anything.  We were completely soaked through and shivering by the time we grabbed the mooring ball at Coconut Grove Sailing Club just south of Miami proper.

While back in Miami at Coconut Grove, I decided to try my hand at getting the 1970's Aries self-steering windvane operational again.  I had put a bit of thought and effort into it before the Bahamas, but couldn't get the corroded sub-assemblies apart to replace bushings, wasn't able to visualize the rope route without chafe points, was pressed for time, and eventually decided that hand steering would be fine for one trip with two fit reasonably-young men. 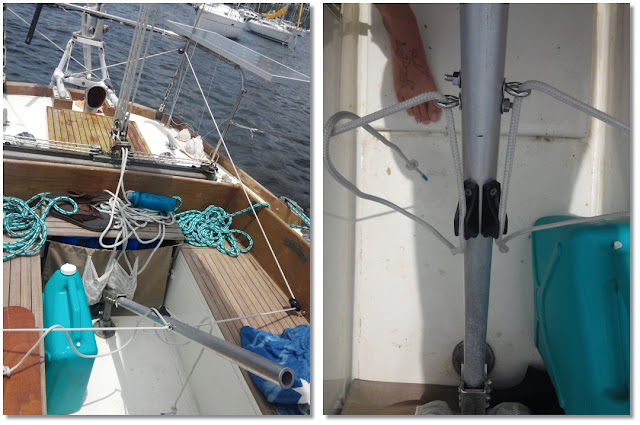 At some point in the in the Bahamas I finally realized that the rope routing solution was easy with a third set of blocks. So was removing the frozen and broken parts once I took the entire assembly off the boat and brought it to a vice and oxy-acetylene torch.  I wish I had put in more effort before the Bahamas, not just because hand steering is a bit exhausting, but because wind vane steering is so damn awesome.

Unlike electronic autohelm systems that make jerky incremental helm inputs based on compass heading, helm changes with the wind vane come progressively, at the exact right time, and with helm pressure and direction consistently matching wind pressure and direction; all you have to do is sit and watch it happen.  Motion is smoother and the course is more consistent than if you were manning the helm yourself.  Also, setting course relative to wind instead of compass means that I can start up the engine while sailing, set the wind vane to keep the boat dead into the wind, (which it seems to be able to do better than a human) and take all the time I want to casually douse and store my sails.  Wind vanes are so effective and so pleasant for sail voyaging that many owners speak of the equipment as another crew member and give it a name.  Yet due to my laziness, in a month and a half of sailing we only got to enjoy it for the two days it was actually repaired on our sail from Miami to Key West. 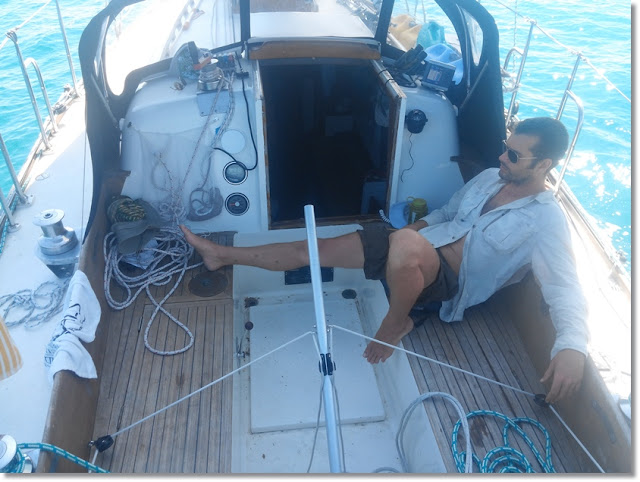 Look, No hands.  Oh, and I finally made use of a razor and clippers in Miami as well. 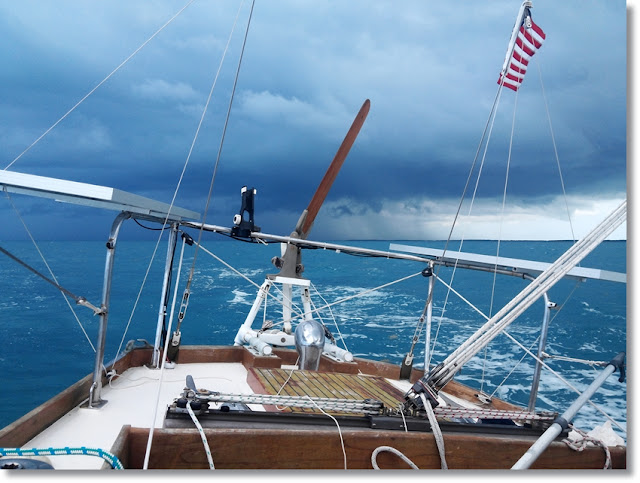 Another benefit of the wind vane is that I can make lunch while just glancing out the windows for obstacles and at my Android tablet to verify course. 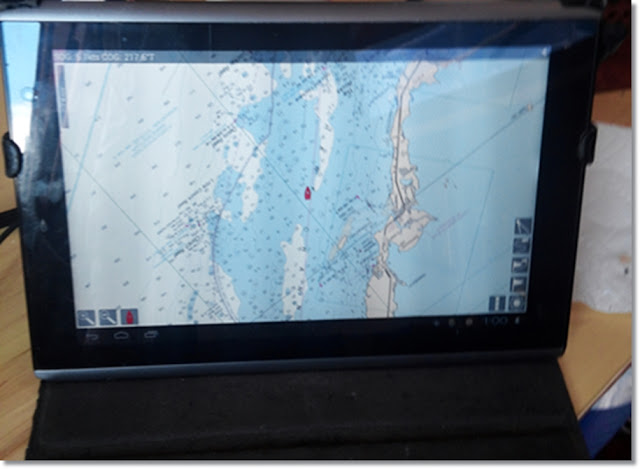 While in the Grove I also dug out my sewing machine, a nearly-mint, 100% complete-with-all-OEM-accessories-and-manual, steel gear driven, 1959 Singer 401A Slant-o-Matic in the rare and sexy faux alligator skin case...  I love to hear the song of that huge motor pushing those polished steel gears resonating inside the heaviest-of-all-cast-aluminum-singers housing...  oh, and I used it to whip up some rope bags for the cabintop assembly and mainsheets, and a sunbrella curtain for the propane tanks. 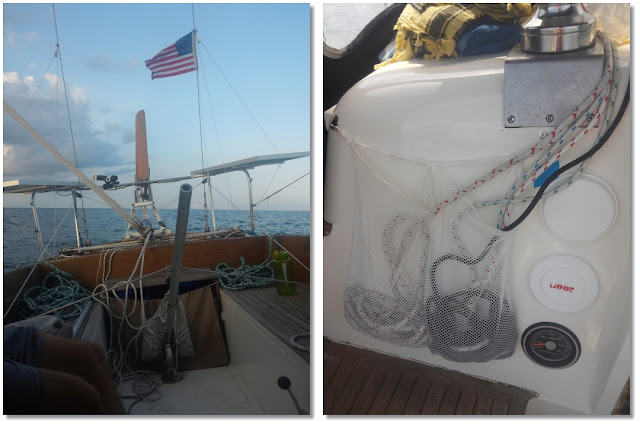 Yeah, yeah, whatever, sewn stuff.  Now here is the money shot: the sexy machine that did the job.  It turns me on every time I turn it on.  (Mechanical Object Love is a real thing, Google it.) 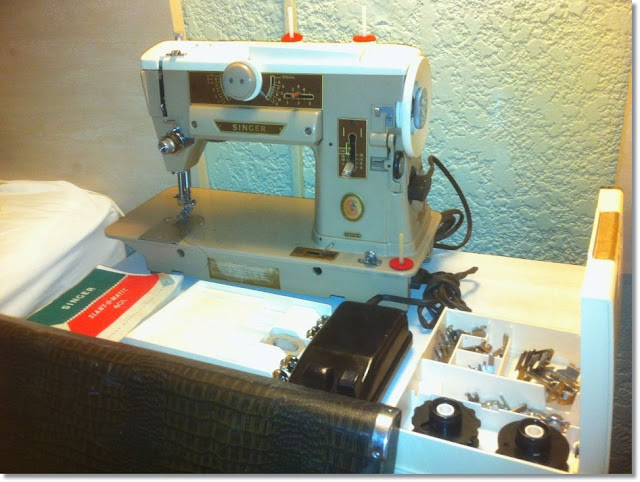 When we left Coconut Grove for Key West, I apparently forgot that I had a camera.  We took two days sailing to Key West enjoying the wind vane, anchoring our first night in nomanswater and making Key West by sundown the second day...  No pictures, some blurry surreal memories, numerous drinks, and an uncounted number of few days later, we sailed in a very hung over state back east to Marathon, FL.  A true Key West experience.

Once in Marathon Clint caught a flight out, and I made arrangements to have Robin hauled for the remainder of the hurricane season and return to Sarah in Arkansas.  ...That was nearly a year ago...
Posted by Andrew Lea at 9:41 PM