Racing to the Regatta

We planned on seeing the Exumas, but I wanted more than anything to be in Georgetown for the Family Island Regatta, so our trip from Nassau to Georgetown, through the entirety of the 365 islands in the Exuma chain, happened in the span of a week.

Leaving the east end of Nassau harbor can prove difficult in a flow tide, as water rushes in at half hull speed. We motored against the wind and current and resulting seas at three knots for a full two hours before we could turn south. Wind was never in our favor that day, and we stopped short of our first day goal of Norman's Cay. Norman's Cay is the former home to a notorious 1990's cocaine trafficker, and also notoriously close to Johnny Depp's Private Cay...
But with the sun headed towards the horizon, we stopped in Highbourn Cay just a few miles north.
It was a cute little island with a single very nice (and expensive) marina and a single resort. Our arrival was heralded that evening with fireworks 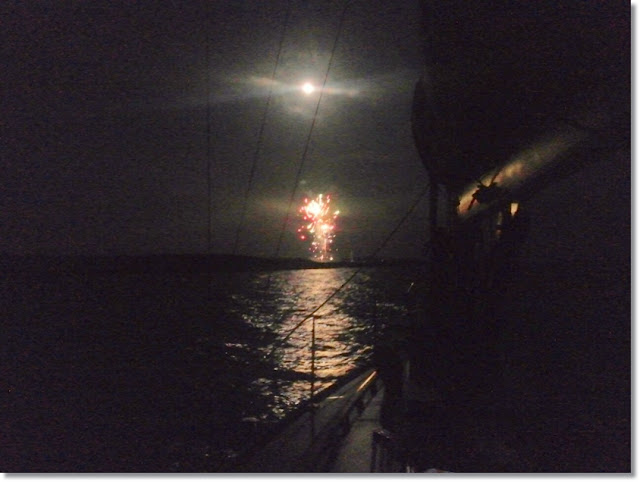 The next day with an ENE wind, we set sail southeast down the chain. Our eventual stop was Staniel Cay, or more specifically, Big Major Cay, home of the famous swimming pigs, about a half mile north. I was feeling a bit down about not catching a fish on the way from Nassau to Highborn Cay. We had much success trolling lures behind the boat in the Berry Islands, and reports from other cruisers promised the Exumas were replete with fish. Finally, as we sailed past a deep cut that day, the line on our our starboard side trolling spool went taught. I hauled it in only to find we had caught some seaweed. As soon as I cleaned the lure and dropped it in the water, I watched a Mahi Mahi take it at full speed just as it passed the stern. The line wasn't cleated yet, and started jumping off the spool. I tried to stop the fish's run when the line went slack. I had lost him. Even before my heart could sink, the port side trolling spool started spinning with another Mahi Mahi, this time large enough to yank the line through the cleat. I dropped the starboard spool and jumped across the cockpit to grab the port spool and start hauling it in. As I pulled the fish alongside the boat, I could see we had caught a very large male Bull Mahi, but in one last spurt of energy, he jumped out of the water, slapped me in the face, and ripped the lure right off the end of the line. Dejected, I hauled in the starboard side line only to find out that lure had also been taken with a bite clean through the leader. In spite of the loss of two fish and two lures, it was a perfect day of sailing. We sailed all day pointing just a hair above a beam reach in 20 knot of wind, gliding across the flat seas of the protected lee of the islands. Alfred the Butler, our self steering windvane, was able to steer a laser straight course. 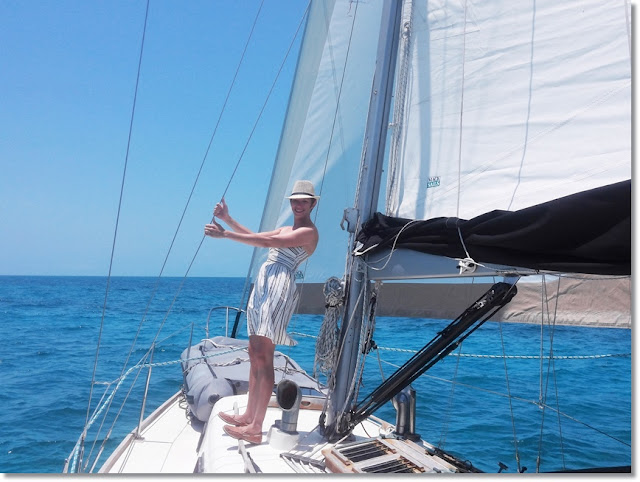 With the moon nearly full and hands-off sailing so easy we decided to sail into the night arriving at Big Major Cay shortly after midnight.

Aside from the swimming pigs, in the half mile stretch of water between Big Major and Staniel Cays lies another rather famous landmark: Thunderball Grotto. An unremarkable rock in the middle of the straight has been hollowed out by millennia of erosion to become remarkable enough for a 007 film of the same name. I wanted to swim in it before we left, but it is only tenable at low tide, and low tide the day after swimming with pigs was at 4pm. With our successful night sail a couple days earlier, we decided to wait until the afternoon and I made a quick trip across the bay to Thunderball Grotto to grab some GoPro footage before we weighed anchor and set sail exactly into the sunset. 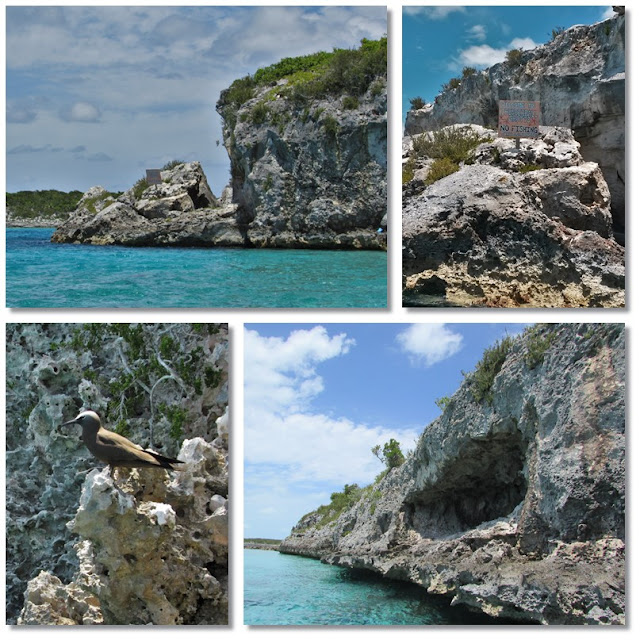 We sailed past Great Guana Cay that evening and anchored under a 3/4 moon at Farmer's Cut. The next morning we headed out Farmer's Cut into the deep on the eastern side of the Exuma chain for the final passage to Georgetown.

Offshore was quite a bit rougher than our protected sailing before, and with a ESE wind we only made it as far as Lee Stocking Cay before a storm blew in and had us ducking into Aderly Cut early in the afternoon. 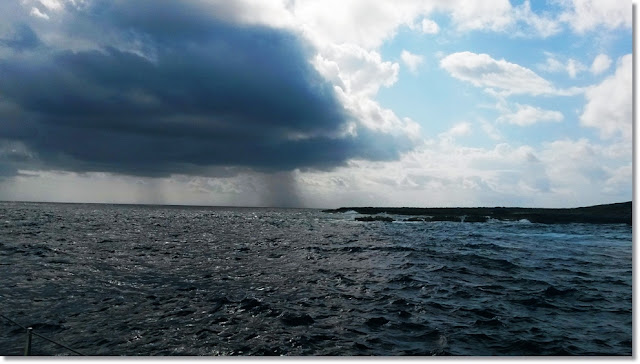 We finished the trip to Georgetown the next day, and in the pelagic waters off the eastern shores of the islands, we finally landed the big Bull Mahi Mahi that had eluded us.

I am a firm believer in fillet and release. 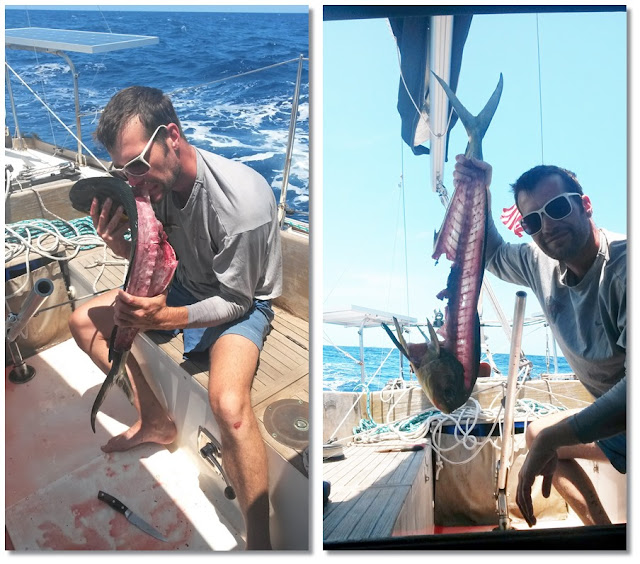 The Regatta had started a day earlier. The sloops were racing around Georgetown Harbor as we sailed in and selected our viewing spot near the Chat and Chill for the remaining three days of racing. 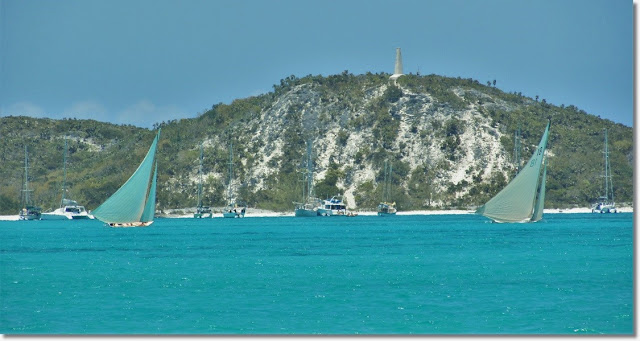 Just as we dropped anchor I heard the sound of twin turbo props approaching immediately behind us. A very nice amphibious float plane had decided to enter the harbor and visit the Chat and Chill as well. 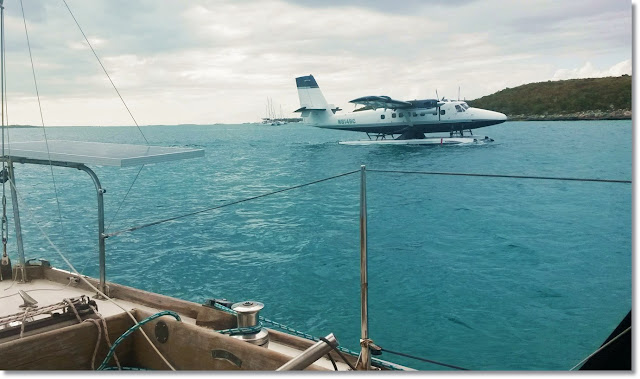 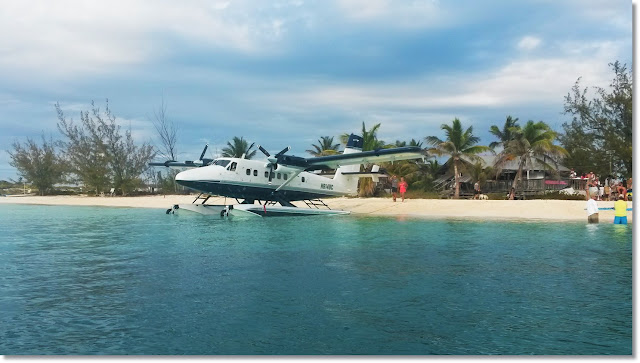