The Topsides are complete. 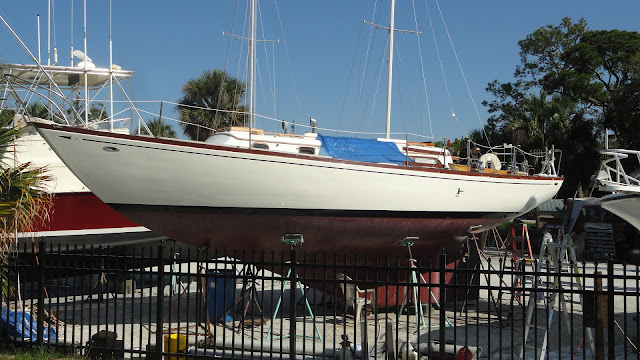 But before we could go to town on the decks, AJ noticed black standing water in the dinette seat drawer compartment. It smelled like the oily bilge water, that is to say, like death.  When we sopped it up, it eventually came back. We found an 1/8" hole in the floor where it was coming up.  Water was trapped somewhere. Not good. 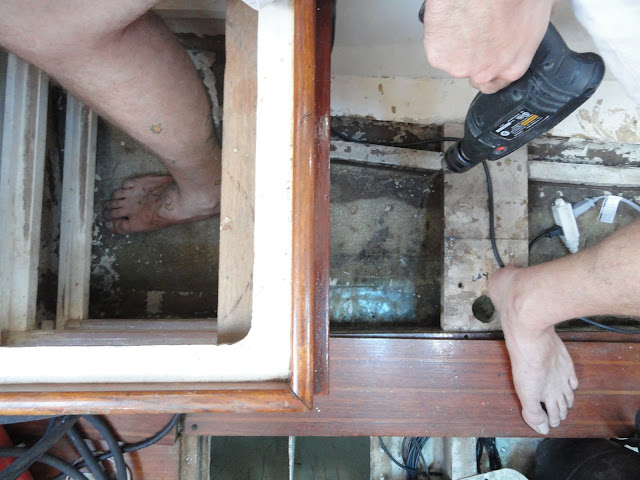 Between the sweeping hull sides and water tank is a flat fiberglassed in subfloor. The water was somewhere between that and the hull. 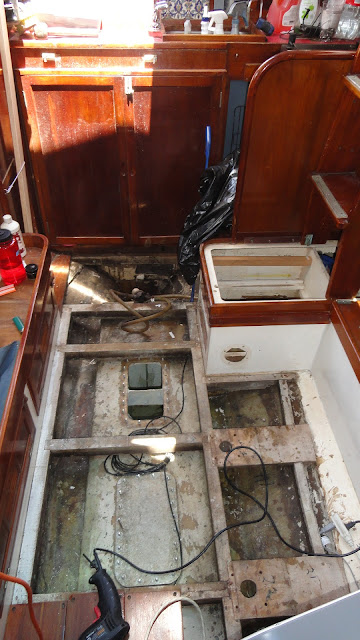 AJ drilled holes in the subfloor next to the compartment. The released pressure caused more water to come out in the drawer compartment. Wet sand came out of the new holes. 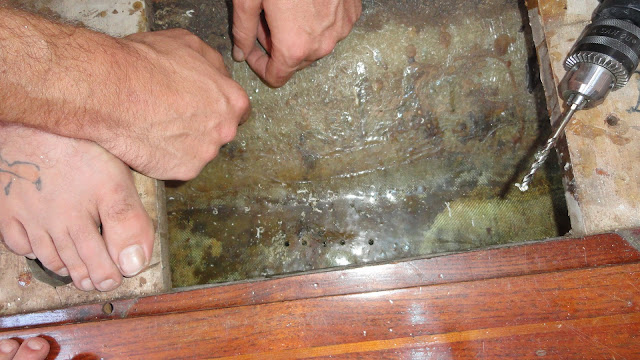 They had to come out. AJ drilled a few holes along the edge and started chiseling. The starboard side was filled with polyester resin.  The resin was glassy smooth as was the inside of the hull, indicating there was never any adhesion.  Polyester resin shrinks and cracks, as you can see. About half down though, the resin was not fully cured, and was a sticky mess to dig out. 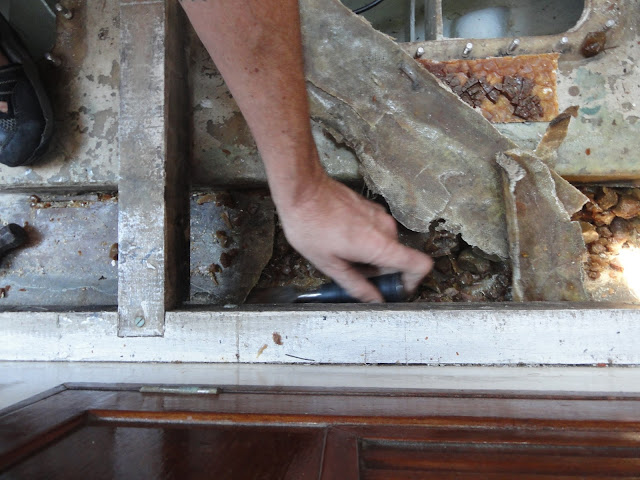 The port side, where the mystery bilge water was coming up, was filled with polyester resin, sand, gravel, and water that crept in through the 1/8" hole. Oil likely got in when we had the Mercedes swinging, thus the smell. 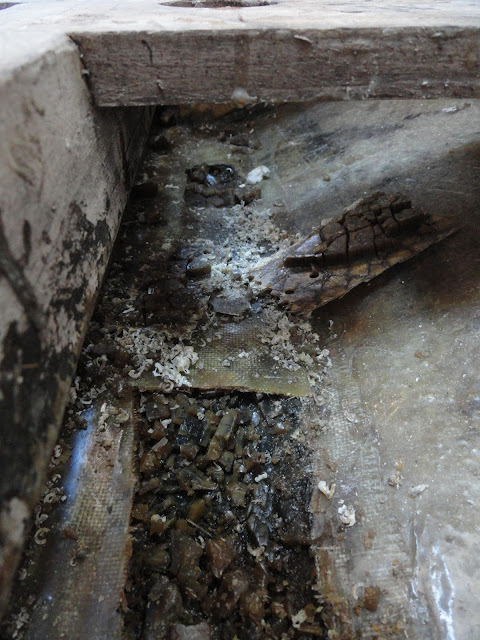 Underneath the added subfloor the hull slants downward a couple inches until it meets with the water thank. The water tank lip is glassed to the hull sides. The floor leveling addition was likely added to keep water from pooling  in a crescent next to the tank, and allow it to go to the bilge. We know that didn't work well because of the number of hoses that were running bow to bilge.
Upon closer inspection the water tank is not a tank at all. The inside of the tank is the inside of the hull.  It is sealed off by the lip on top, and a wall built between it and the bilge. The fiberglass tape on that wall is delaminating.  The bumps in the bottom of the tank are glassed in keel bolts. The board in the center with the cut out is coming apart. It provides support for the hull, and keeps the water from sloshing too badly. The paint looks suspicious and the tank lids are chalky oxidizing aluminum. 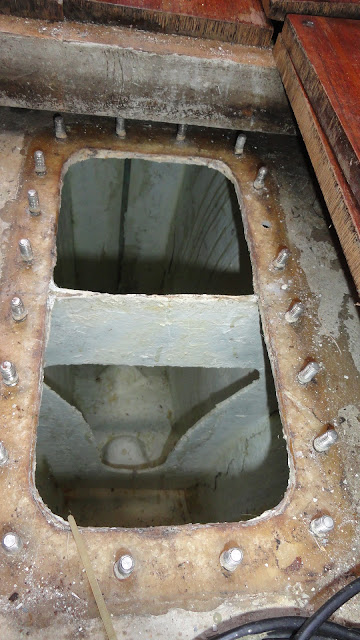 The water tank is done for. We are going to cut off the lip of the tank, leaving us with nothing but hull sides. It is the only way to be able to access the inside. The Wall between the bilge and tank needs to be removed and replaced since it provides structural support.  Then we get to decide what to for a water tank. We could remake it as it was, get a custom tank made that would fit inside suspended from the floor frame, or use water bladders that expand to fill the space, which is my favorite idea.

While AJ ripped apart the floor, I got started on the decks.  This is the honeycomb we want to take off.  The decks used to be teak, and this is what's underneath from the factory. The black dots are epoxy filled holes left from the teak removal. 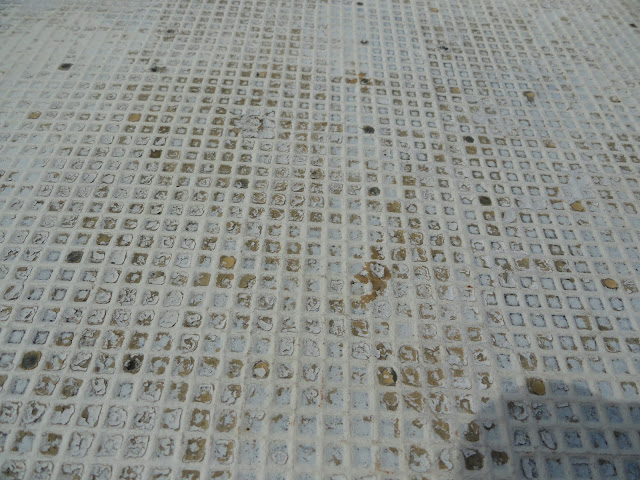 The areas of bare fiberglass are raised ripples in the deck. I don't want to sand down the fibgerglass so I have to move on and leave some portions slightly raised. I'll come back for them with a smaller detail sander. 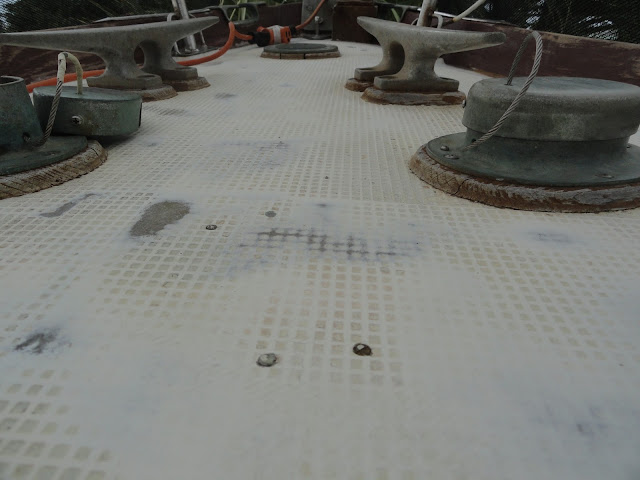 It takes about a half hour to sand down a square foot.  And the vacuum has to be taken to the ground and dumped about out every 20 minutes.

We got 3 scorching days without rain, and rigged a tent with greenhouse shade fabric and pvc pipe. We will use it the fabric to make a boom tent once the mast is back up. It keeps the cabin 10 degrees cooler. 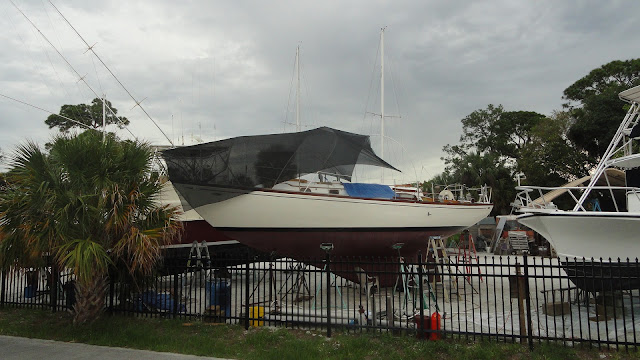 Yesterday we got caught in the rain.  There was a drip, a drop, a thunderclap, then instant down poor. Rolled in in about 30 seconds and drenched everything. Today it's raining, and it's supposed to keep raining till Friday. The bilge is full of water again because everything still leaks. If my boat could just stay dry we could work on fixing that...
Posted by Sarah Lea at 5:24 PM