Pretty on the Outside, Rotten to the Core

Robin's got new AwlGrip sides in oyster white; so shiny you can see your face in it.  Just enough buttercream richness to allude to its vintage (age? Decrepitness?), while keeping the viewer wondering if it is truly white without another Florida day-glo-white boat for reference.  The original gel coat was a deep cream, but a bit too rich for me.  This is a nice compromise that won't burn your retinas, nor leave the boat looking too dated. 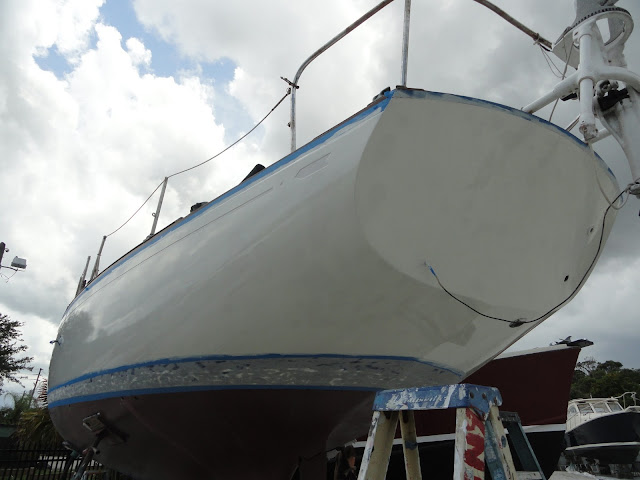 The waterline stripe and the arrow are taped off, ready to be painted black. I'm glad the bottom paint turned out the deep maroon it is instead of the ferrari red that it was.  Sophisticated curves deserve sophisticated colors. 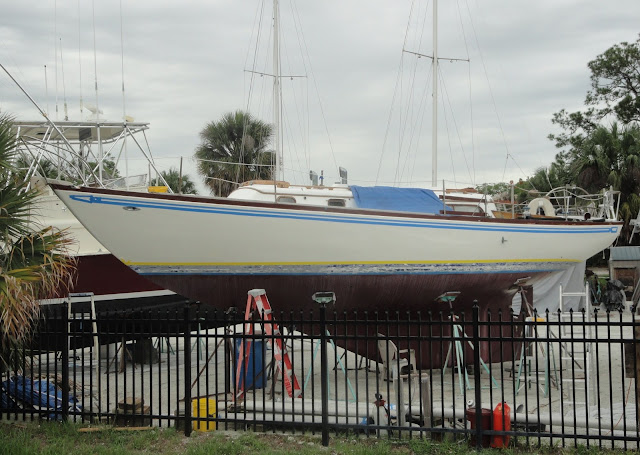 Here I am getting angry at a cutlass bearing. 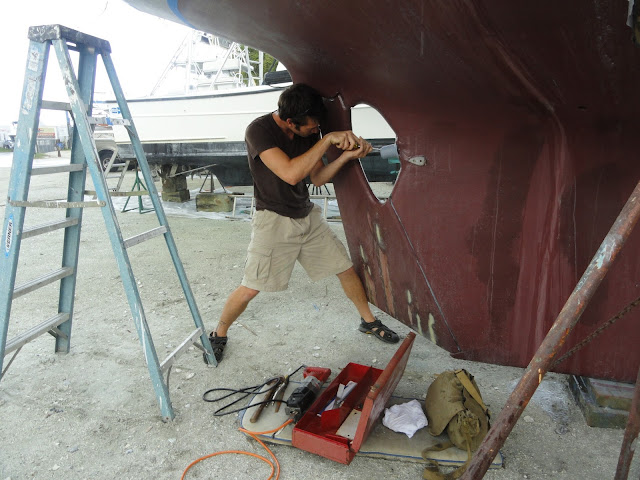 The brass inner sleeve of the cutlass bearing was well attached to the housing.  This is after cutting out the rubber sleeve. 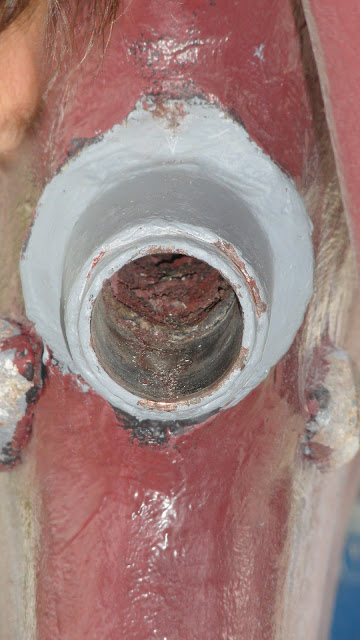 A fellow boater in the yard came over and lent a hammer driver.  His parting words were, "Best of luck to you, many men have cried trying to replace a cutlass bearing." A Florida instant deluge washing away my tears in the middle of removal.

The bearing never did come out, so the whole housing came off instead, and went to the prop shop for a professional press.  Probably a better idea anyway since it is about to hold and seal the shaft for our new engine and prop. It is difficult to see here, but the Previous owner used thickened epoxy to fair the hull around the cutlass housing.  Pretty in theory, kinda asinine in practice. 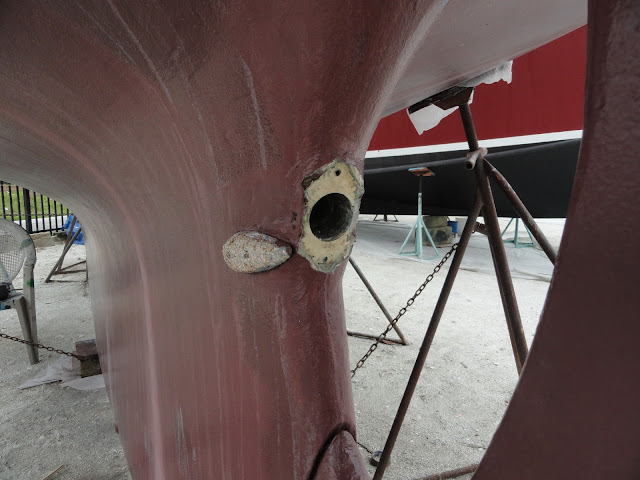 The anchor locker after a little paint scraping by Sarah.  I'm not sure if we can get in there to reach the bow without removing the divider panel. 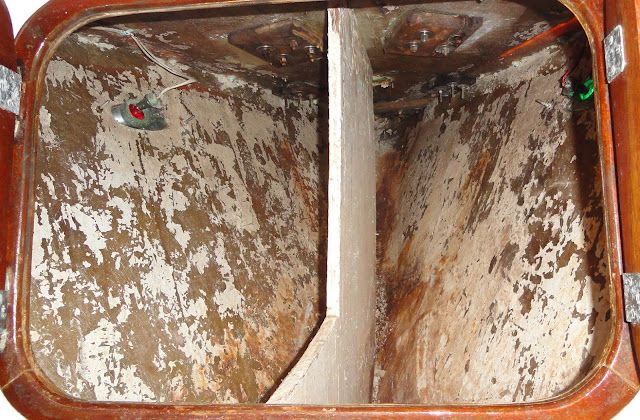 And also not with those on the ceiling. It's unlikely that we could stay low enough to not cut our scalp open on one of 12 screws.  I'll be cutting them off flush after reinstallation. 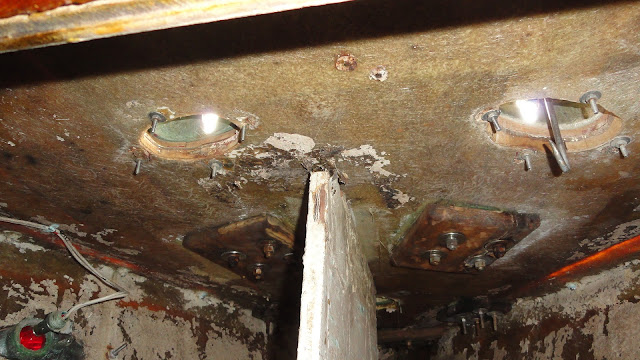 The panel is painted plywood with fiberglass and epoxy tabs holding it to the ceiling and floor.  We will have to cut the panel out, coat it in epoxy and glass, and put it back in.  We will also seal the exposed core you can see around the rough cut holes for the hawse pipes in the ceiling.  Not sure how long they have been that way, but the nice thing about teak-cored decks as you can see, is that the core is still dry and still fully laminated...  though the cleat backing blocks aren't. 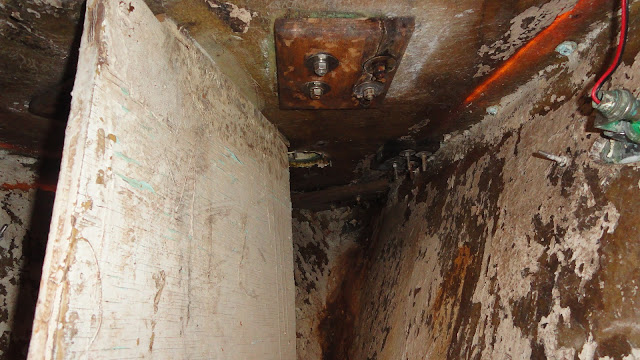 Here I am removing those damn table stands.  The dinette table has been the most painful thing in our lives for the last year.  From its sharp edges causing deep cuts and bruises on our hip and thighs, to the constant knee bashing on the 3" slides under the table, to shin banging on the stands... Even the bolts resulted in enough busted knuckles that I ended up cutting the heads off with a grinder.  The evil has been exercised. 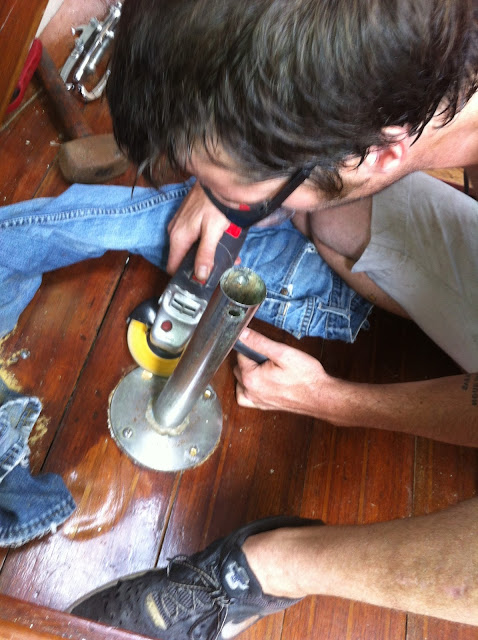 Free at last, with a little help from my favorite "persuader", the 5 pound sledge with a 9" handle. 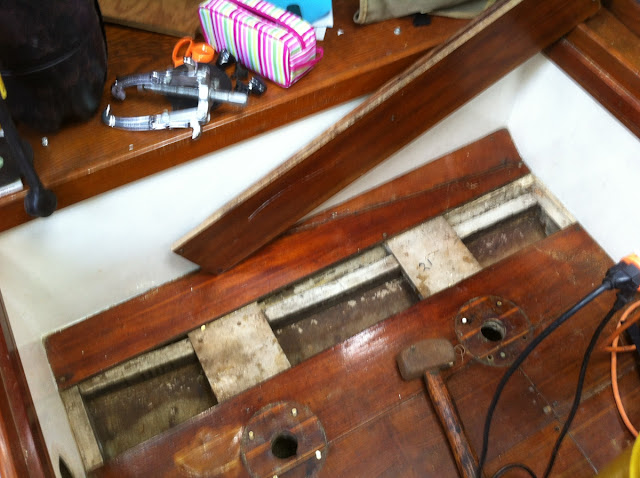 What lies beneath the boards that have never been removed. 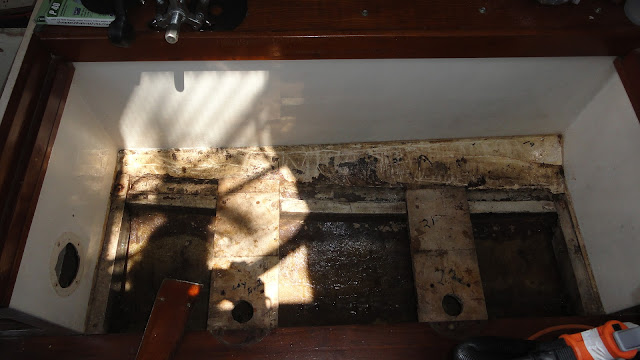 Vinegar and water is the first and primary cleaning solution.  Why waste expensive non-eco-friendly cleaning chems and breathe toxic fumes when there is just so much crap to get loose? 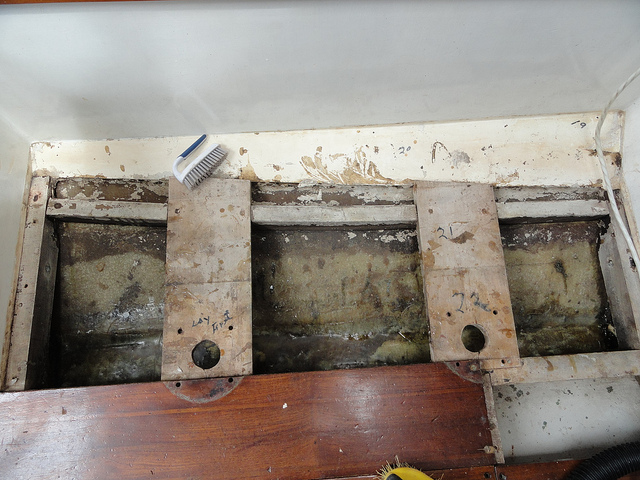 I'm still shocked at which screws are the hardest to get loose.  So far, every underwater threaded fitting has come free with a couple taps followed by steady pressure.  The smaller screws that hold the interior together are proving to be pure evil, as you saw with the table.  The screws holding this floorboard on are still making me scratch my head.  Most of them were varnished over.

Here is more bulkhead de-lamination. This is the de-lamination around a leaky window, split by the bulkhead. It's the same bulkhead Sarah ripped the bottom out of in the closet. 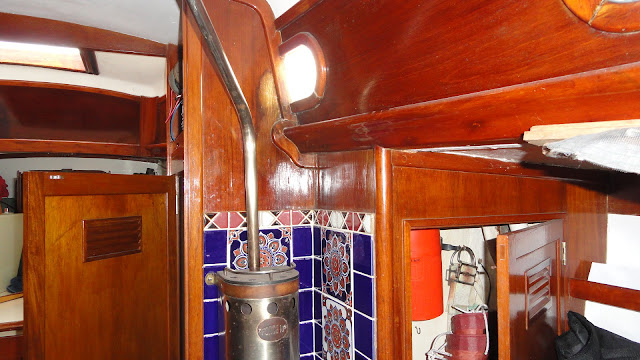 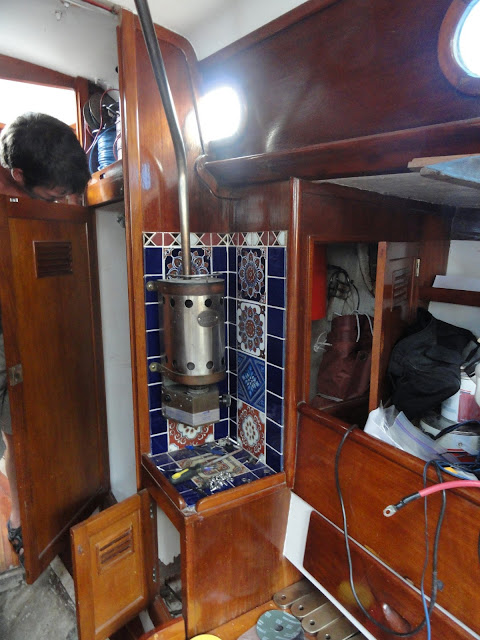 Bulkhead de-lamination is the major reason for the subfloor rebuild.  You don't want to fix the bulkheads if the floor isn't draining away standing water properly.  Soon the floors will be flowing freely to the bilge, and we can cut and glass in new bulkheads around the cabin.  But first we will seal the decks and install new windows so no water is present to make the newly-cleared trip past the bulkheads to the bilge.

As soon as the black striping is done on the topsides, we are going to hit the decks and abandon the demoralizing, filthy, stifling cabin and spend some time in the fresh air.   It's not supposed to rain Sunday through Tuesday, so we are going to start sanding the paint and honeycomb off the decks with 36 grit and vacuum sanders. Then on to hardware removal/re-installation, chain plate removal, patching the deck, wood treatment, and paint.  Then we'll replace the windows.  Once the decks and cabin are fully sealed, we'll head back down below.
Posted by Sarah Lea at 4:45 AM