WE ARE GOING TO HIT RAINBOW CONNECTION! The tale of our first near shipwreck

In the those first weeks on the boat, of course AJ wanted to take it out sailing.  I was not feeling too excited about this as I still knew virtually nothing about sailing a keel boat. I  barely knew the terminology he was always spouting which always led to strained communication. "Oh! you want that rope! If it's the rope you want why don't you just call it a damn rope!" But no, a rope is a sheet and a pulley is a block.

We prepped everything for a sail up the river and back.  We warmed up the engine for half an hour,  then I went forward to cast us off the mooring ball.  AJ put the engine in drive and it did not engage. We were drifting. Drifting in a 20,000 lb vessel towards other 20,000 lb vessels in a mooring field with no steerage. AJ was frantically trying to engage the engine and steer, I was just frantic. We yelled god knows what back and forth until I screamed "We are going to hit Rainbow Connection!" Rainbow Connection was our nearest neighbor. It was the boat of a 23-year-old Canadian who had lived on that boat with his grandparents since he was 6, and lived on it alone since he was 18. Lovely boat. Lovely guy.    AJ barked back at me "We are NOT going to hit Rainbow Connection." He was at the helm and there was absolutely nothing I could do in this crisis, and watching only led to yelping about what was happening which didn't help anything. So I sat down in the cockpit and put my head down. I was just going to wait until I heard a crash. I was thinking that it was over before it began. I had never been more scared. I was not afraid for my life, we were swimming distance from a dock, I was afraid of losing the boat and being 100k in debt for someone else's. Enslaving us. This dream would be unresuscitatable. Over, all over.

Then he said, "We are going to hit Rainbow Connection". I bolted up and watch our boat drift closer and closer, the bows of our boats on a sideways collision course. Time nearly screeched to a halt all sound disappeared as I watched the boats move towards each other.  AJ managed to get the engine to engage in reverse just in time to swing us back and around. I watched the nose of our bow circle by Rainbow's bowsprit missing it by just a few feet. He backed out into open space until he could get forward steerage enough to get us out into the river.

I was pretty shaken up at this point and wondering what we were going to do now that the transmission was not working and we were in the river and how we were going to get back to the mooring ball. But AJ immediately yelled "It's time to sail! take the wheel!" and he ran forward to raise the sails. Once we were in the river we could gain control with the sails, not to mention sailing is what we set we had set out to do. I was not in the best condition to be sailing for the first time. But what else can you do? You must figure it out and adapt. Quickly.

The wind caught the mainsail with a snap, lurching the boat forward, causing louder than expected moans and creaks from the hull and rigging. Then the boat started to tip. It felt like we were falling over.  The slow even pacing of the lean made it feel like it was going to keep falling all the way into the water, but around 10 - 15 degrees it held.  You can feel the power of the sail pulling and tilting the boat beneath you. it was unsettling in its unfamiliarity.

I had the wheel while AJ tuned the sails.  I was watching the GPS to keep the boat centered in the river, while watching to go between the markers out in front of me,  and keeping a close eye on the depth sounder. I can't say it is a difficult thing to do per se, but piloting a multi ton vessel for the first time, with no prior experience on the water and just having nearly been in a shipwreck, I was struggling a bit to stay calm and process all unfamiliar scenery, forces and motion. But we relaxed a bit once everything was set and the course was straight and were able to sit back as be taken by the wind with little or no effort on our part. We made about 6 knots.

We left the engine running for fear of not being able to restart it and to hopefully get it to engage in drive so we could motor back through the mooring field. We managed to get it going forward well enough, barely 2 knots, to drop the sails and steer back to the ball. AJ drove and I went forward to the bow to grab the mooring ball as we approached it and tie us off. He steered well and I managed to catch the ball first go round, thank god. We tied off and were safely back on the ball.  whew! Eventful day.

We need a new transmission.

Our boat under way 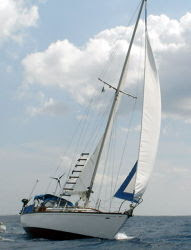 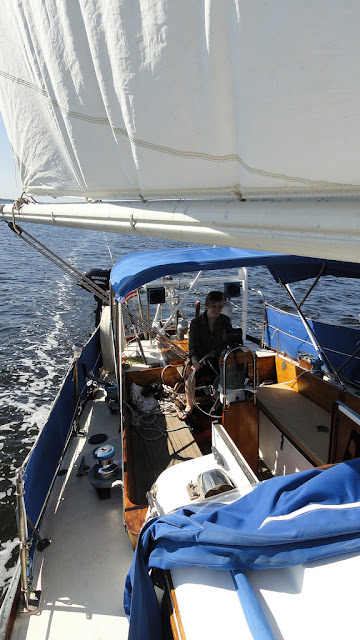 "..Someday we'll find it, the rainbow connection, the lovers, the dreamers and me!.." 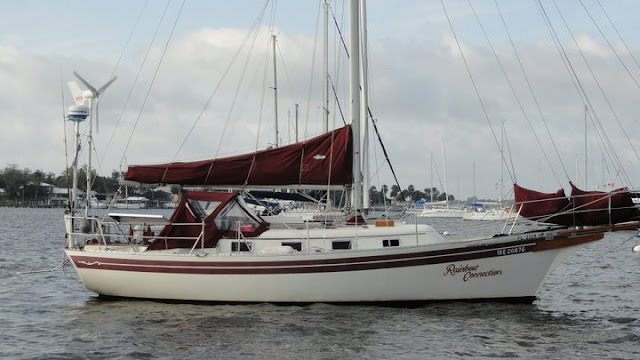 Email ThisBlogThis!Share to TwitterShare to FacebookShare to Pinterest
Labels: Boat Life, How it all Began, storms, Storms Shipwrecks and Other Disasters