The Army was flying us home to Arkansas, but three days later we needed to be in Florida if we were going to be able to meet the sellers before they flew to Germany.   The trip to the USA was a 24 hour travel day followed by a couple hours of sleep in Little Rock where we picked up a small truck we had bought on Craigslist a couple days earlier while still in Germany so we would have something to get us to FL. We had to register the truck and replace the radiator in one day, then start driving. We drove for 2 days through thunderstorms, floods and white out rain.  We had been in 2 countries and 6 different States in the last 3 days.  We had barely slept for 4.  Finally, a destination. We collapsed.

The next day we met the German-Alaskan family living aboard.  We were seeing the boat we had already committed to for the first time, luckily everything seemed in order. They showed us around and took us out for a quick sail up the river. It was the first sailboat I had ever seen in person.  Luckily it was as peculiar and fanciful as I hoped it would be.

The next day we moved aboard.  I should mention that the boat is on a mooring ball, thus only accessible via dinghy.  We showed up at the docks that morning around 10:30.  The sellers had left us their pitiful hard dinghy,  beat to death and barely floating, and we couldn't get the outboard started. Eventually we got it sputtering and made it across the water to the boat. Just as we dropped our bags the wind picked up to 25 mph.  Winds too strong for a broken outboard engine to make it back to shore.  So the adventure began day 1.  Stranded on the boat without food or supplies, not knowing when the water would be navigable again.  I found the situation amusing, as I am usually amused when the universe plays these tricks, but AJ felt really pretty bad and said "It's your first day on a boat and I cannot provide you lunch; this is really not ok."  Hey, the rain gave us the opportunity to find all the places the boat leaked. I learned the good old boat stereotype "leaky teaky" held up.  The boat rocked and creaked in the wind as the rain pelted down. The water calmed enough by 8 pm to get to shore and have our first meal. I was suddenly grateful for how late stores are open in the United States. We got some basic provisions and headed back to the boat.  The second day also held winds too strong for us, but we managed to catch a ride in the marina's motor skiff (they refused to take us back later in the day! we had to hitch).

After that it was calm enough for rowing. Sadly the dinghy barely could do that. It had no traction. We named it Floating Leaf, as that is exactly how it behaved in the water no matter what you were doing. We explored our new home, assessed the systems, and began recovering from the excessive stress and activity of the last month of packing, moving, jet lag, and non-stop travel.  Soon it would be time to go back to Arkansas to receive our household goods from Germany and prepare to move aboard permanently. 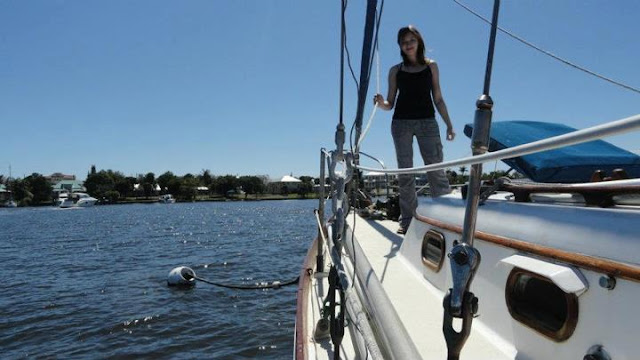 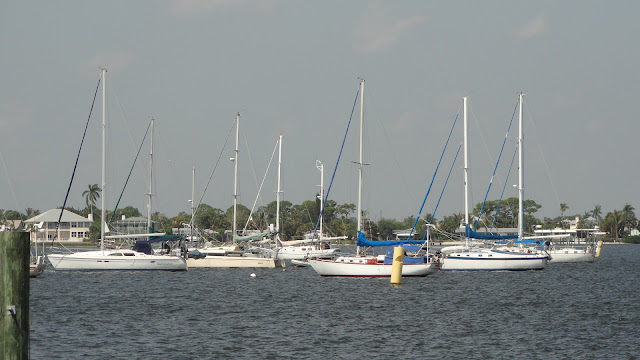 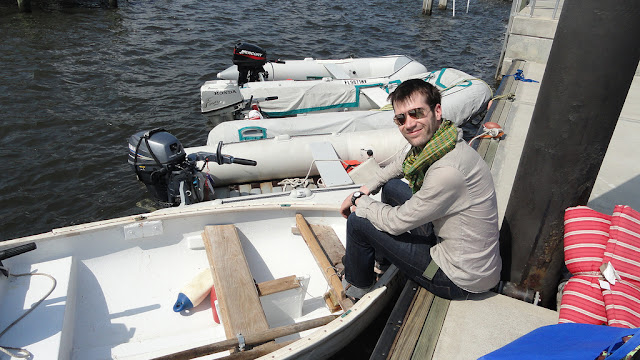 Being March it was not too hot yet so living in a cabin filled with ambient wind was fortunately pleasant.  We fixed small fiddly things and tried to enjoy all the new novelties of life on the water.  One was showering in the open air cockpit with a garden sprayer.  This was to be our permanent means of showering.  Let the water heat up in the sun a bit, and hose yourself down.  Another was seeing the sunset every day. You can't miss it or even avoid it when you are sleeping under it.  I have rarely been aware of the rising or setting of the sun, only sometimes had I coincidentally been outside for it.  But now the wind, the sun and the waves were the ever present forces exerting control over my daily activities.  I have lived in land locked mountainous regions my entire life, and had never seen a sunset on a flat horizon; it's quite the daily spectacle. 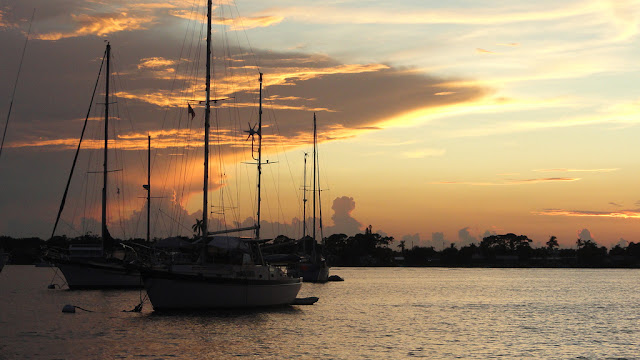