As I said before we have abandoned the original Mercedes engine.  But there is an excellent unexpected new development.  We will be getting a rebuilt Yanmar on next Wednesday. Now we just have to finish the engine room and make a new cockpit hatch that won't leak rain water on the new engine. AJ made the mold for the new engine hatch and it will get laid up next week. This weekend it's back into the pit for more scraping sanding and scrubbing. Hopefully we'll be ready to paint the engine room by Monday.  Maybe drop the engine in the next weekend, once we've worked out the engine mounts hosing and wiring. Having an engine will mean we can finally move. We can get off the dock and out of this marina. We will finally have the freedom to anchor, and go where ever we need to.

There are a few other things we have to work out in order to be completely independent.  For instance a shower.  We are relying on the marina for that at the moment. Solar showers in the cockpit are more than adequate in the warm months when you haven't got neighbors. But, it's in the 50's at night and we have got neighbors.  We need to have a shower solution for cold climates and the instances of lack of privacy.  Like we find ourselves in now. Installing a hot water system was out of the question, and the main reason we hadn't given getting a shower much thought.  But we were delighted to find another solution. A cheap convenient one. An on demand, mobile propane-heated shower.  You can hang it up in the bathroom or the cockpit. Just have to attach it to a propane supply which we'll plumb to the bathroom, and there's already one in the cockpit. It does however require pressure water, which we caved to.  We have not installed it yet, but we will be keeping the foot pump for back up. It has to be rebuilt often, and it turns out the amount of power pressure water uses is negligible.  We will also be installing new solar panels. (Thank you AJ's parents!). This will give us the power we need to be able to run lights and charge the laptop and cell phone, or run navigation equipment. And we have a Honda 700w generator to run power tools when needed.  So we will be able to say goodbye to the Marina's outlet.  There is an insane amount of work to do.  And I'm stuck in an office all day wishing I was doing it. And the sooner we can leave the marina the sooner my salary will matter.  Oh, and the windows. We really need to rip those out and replace them before the rainy season hits. You can already feel it coming. We're entering that constant 30% chance of rain, scattered showers stroll through whispering "the white outs are coming...the white outs are coming.." So a lot of work to do, work that mostly AJ will be doing while I'm at work, which is why he will be updating you as to what's really going on with these projects soon.

Here is our boat at present.  We've finally got the old name off the back. After some sanding and paint patching we'll put our decal on it.  Which says "Robin" with Russellville AR underneath. The old solar panel on the back will be removed and the new ones will be installed as wings on either side of the back or possibly on the cabin roof. Either way freeing the space in stern.  AJ removed the wind generator, and the tower mount it was on. We won't need it with the new panels and it's one less obtrusive thing to have back there. 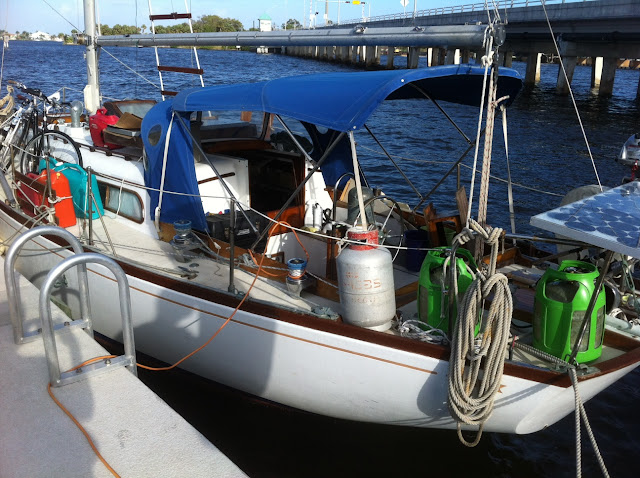