The fallout from Sandy brought an eventful week.  Our apartment flooded!  We had four days of 35 mph winds and intermittent downpours.  By the weekend it appeared to have calmed, but on Sunday morning the storm surge took the tide four inches above our apartment floor. AJ woke up early to go get some groceries, and when he came home he found the tide had risen to the point that water just starting coming across the doorstep of both doors.  The tide rose fast!  I jumped out of bed to grab everything I could off the floor.  Within 20 minutes the apartment was ankle deep.  Most of our stuff was already in boxes, so evacuation was fairly efficient.  Luckily the tide didn't reach the back of the patio where most of our power tools are. We had big plans for the boat on Sunday, but we spent the day evacuating and hanging things to dry instead. 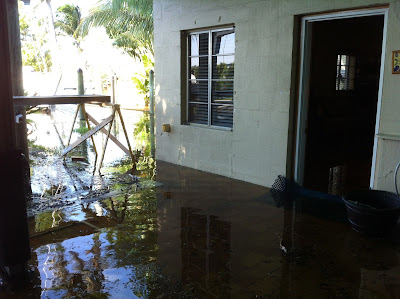 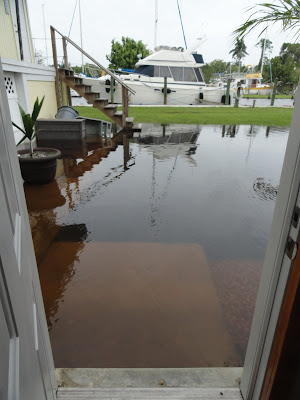 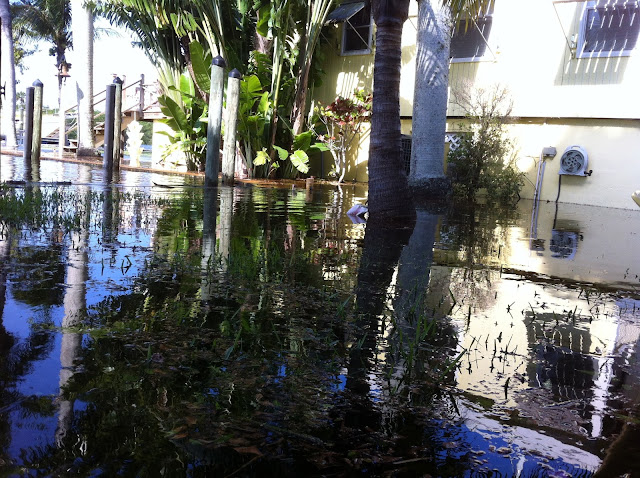 Power boaters sped by causing wakes that carried into the house. They speed by every day causing the docked boats here to sawhorse and jerk against their dock lines.  It's dangerous to be waked unawares while working, standing, or holding something sharp, hot, or powered. It's how I got hit in the head with an iron engine block on the mooring ball.  But high speed waking of flood zones in your 60 foot sportfisher?  The ass-hol-ery appears to be limitless.  The apartment drained as the tide went out, leaving behind a mess of leaves and mud.  We were sent to a hotel so the landlord could pull out his furniture and clean. 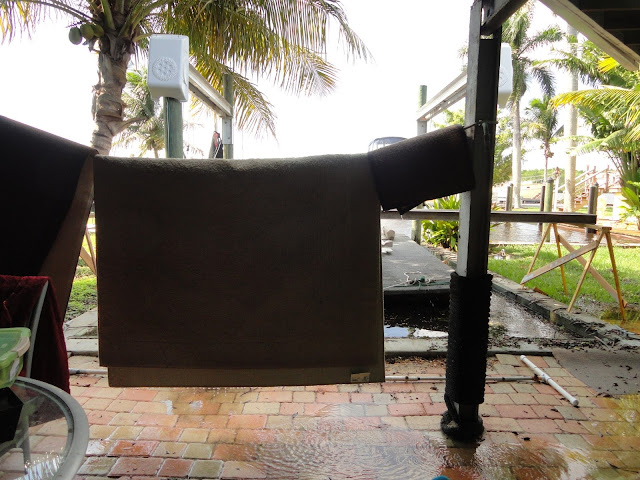 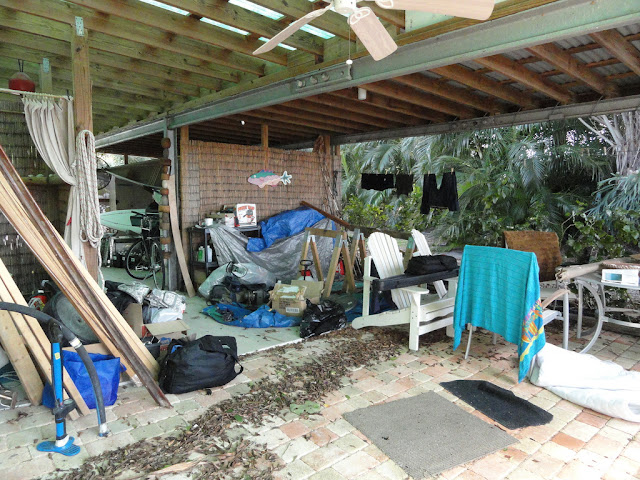 After losing our back-to-work day to the flood, we decided to do at least one project, albeit small, before checking into the hotel. We put the name and home port on the boat.  It will likely never see it's home port, unless we take it up the Mississippi and Arkansas rivers to Lake Dardanelle, but we did register it in Arkansas at the Russellville DMV.  Largely for the ease of keeping our permanent AR address with our other paperwork.  Florida registration would have required a permanent FL address, changing residency, and a couple grand in taxes.  None of which we could manifest.   Plus, registration of a boat > 50hp is $25 in little ol' Russellville, and used boats have no sales tax.  The natural state has it's perks. 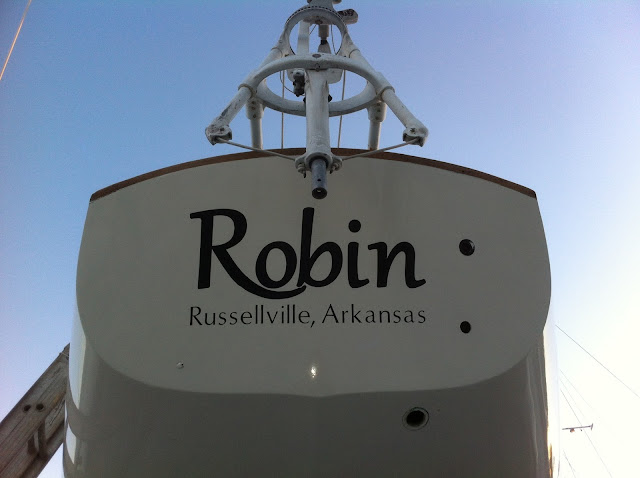 At the hotel we watched Sandy become a nor'easter on the news, as she hit the north east coast. 7 million without power already.  We were lucky to only get tropical storm category fallout.

Before the storms interruption we were on schedule. The rudder was installed last Sunday, and the engine dropped in on Monday as planned.  AJ plumbed the homemade cockpit drain tubes to the new thruhulls just in time to keep the rain from draining onto the engine. 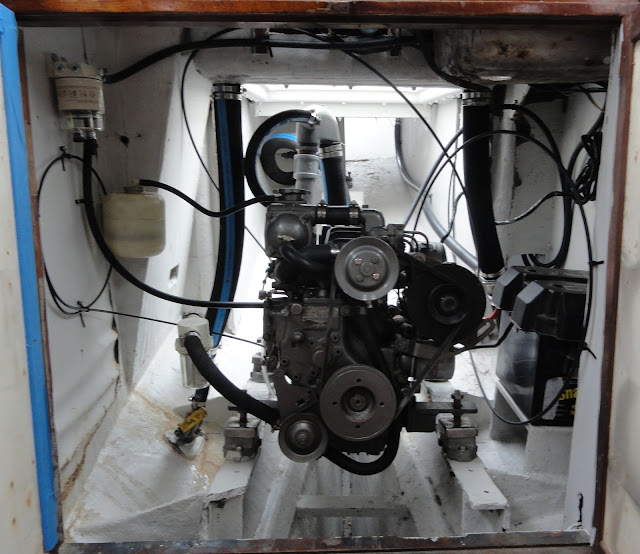 But, sadly our troubles with the rudder are not over.  When the rudder went back on, it rubbed hard against the hull on the port side, stripping the paint. The rudder frame was not welded straight.  It has a quarter inch bulge on the left side. 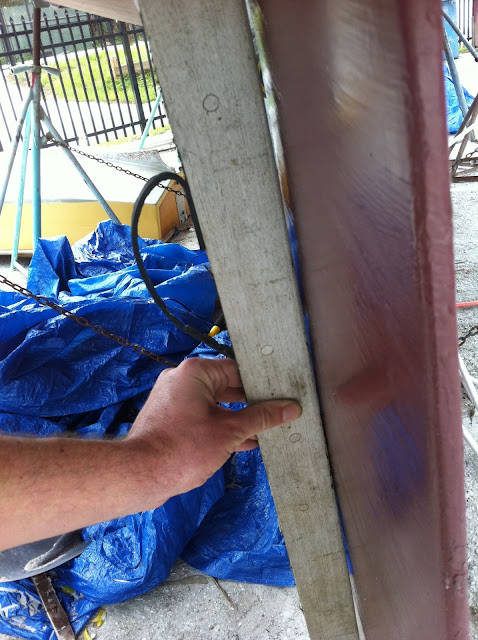 The rebuilder never showed up to inspect it as promised, so we dug another hole, took it off and returned it.  Our guy did the glass work, but hired out the welding to someone else, so he is not eager to completely rebuild it.  He said he would grind down the fiberglass where it rubs.  AJ went to meet him at the boat to fit it this morning.  I hope that's the last of it and we can move onto pluming the engine this afternoon. My poor poor rudder demanded it's third, and hopefully final act.  I hope we can splash this week.  This week which will be chilly! I'm wearing a hoodie this morning. Not because I love it, because I need it, but I'm happy to need it, because I do love it.  When the tide went out, a cold front came in; Now it is all the way down to the 50's at night!  It feels amazing.  With this weather, we can do double time on the boat. We'll probably knock out more in November than we did all summer.  When it's under 80 degrees, anything is possible.