When we got back I almost forgot that we'd be returning to the boat in more finished state than when I left. It was exciting to see all the work AJ and his dad had done. Robin is fully outfitted to sail with a boom vang, electrical panel, depth sounder, anchor with rode, mast wiring, ropes, pulleys and winches. So much work that I didn't do! When I tell people I've been working on the boat for three years, they usually say something like "Well that will just make it so much more rewarding." And while I understand the sentiment, and the rewarding sense of pride that comes from enjoying the product or beauty of your labor, I'm honestly way past that. The fact that I don't know what the core of the cabin looks like where the new deck organizer is mounted makes it a little dearer to my heart.  I haven't felt a warm fuzzy from the boat in a long time. Seeing all this is made me feel it. It's such and awesome relief! Thank you Phil! 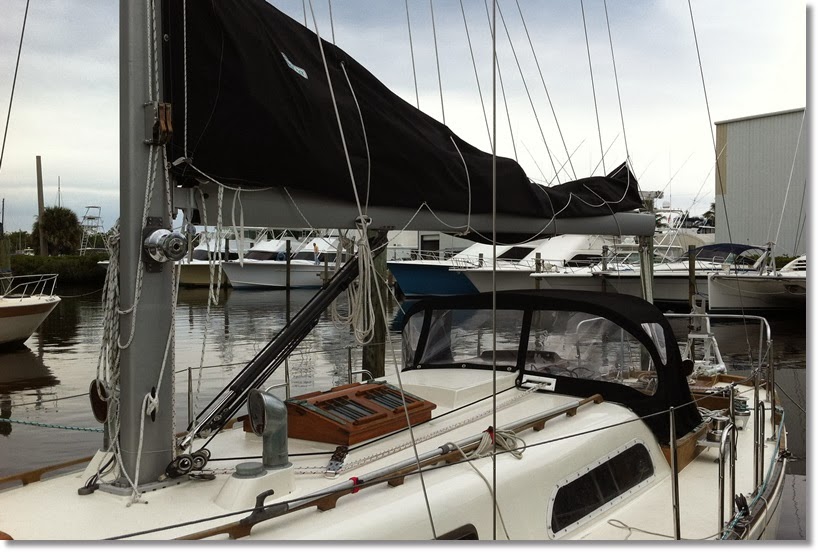 You may notice the bent stanchion in the anchor picture below. AJ will have to tell you about how that happened. I wasn't there. 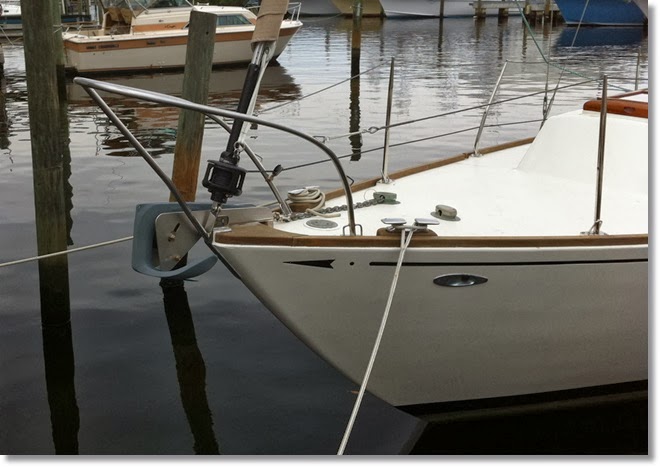 We still have a lot to do inside before taking off. But we are mobile! We can start day sailing and move the boat where we please.  AJ wants to sail so badly it's killing him but there has been no wind this week, and we've been busy reassessing the workload. The plans are as follows: Do final painting and finishing work inside cabin this week. Install the toilet and propane systems (stove, heater), and a couple lights. Move aboard with minimal items. Install remaining electrical wiring and fresh water plumbing. Start working on cabinets and shelves and compartments and moving household things aboard.  Fun, clean work is right around the corner!

I suppose I should mention that while in Arkansas I dislocated my shoulder again. And then again three weeks later. Totaling 3 times in 9 months. I Can't really explain how it happened either time because I wasn't really doing anything, which isn't reassuring.  I met with the surgeon who performed my scoliosis-correcting spinal rods surgery when I was 17 for a check up before we venture out into the great yonder. I mentioned the dislocation to him, and he said I would need shoulder surgery.  Because it already happened twice, it will likely continue to fall out with greater frequency until I do get surgery. And sure enough, three weeks after I dislocated it, it fell out again at a friends house. Realizing that this may become a common occurrence we put it back ourselves this time. We were eventually successful with patience, the assistance of youtube tutorials and a chewed up muscle relaxer. It took two weeks to heal and felt pretty wonky this time.  My brother has already had shoulder surgery after a dislocation that, in true form, was followed by more frequent dislocations until it got so bad he had to have surgery.  So I think my fate might be set on this one. I was really hoping that by the time I started falling apart from old age we'd be somewhere with affordable health care.  But since I turned 30 my joints seem to be failing.  We gotta get outta here before anything else happens!  Until then I'm just going to try to be really careful with the way I use my left arm.

A few months ago I had a dream that AJ and I were at sea.  AJ had lost a hand (the one he broke) and I had lost a foot (the one with the bad ankle).  I was frantically trying to solve the situation, and strapped a broom handle peg to my leg. And for AJ's hand, you guessed it, a hook. I hope this was my brain making fun of me, not foretelling, but I may want to reinforce a few joints before we try to cross an ocean.

Despite my arm not staying in place, the time spent at home was invaluable. We were there long enough to really plug into community. It was wonderful to talk to so many people again, and really have enough time to build relationships. It made me realize just how isolated we've been. I feel much more grounded coming back, armed with a stronger love for my family and friends, who I'm going to miss terribly and who should come sailing! The break was also a great respite for AJ's and my relationship. When projects go on for this long, personal relationships get shelved for professional relationships, and eventually you break under the stress induced by the absence of your personal relationship. We were at that point when we left.  During the break we were able to be us again, and that was a huge relief. We started dreaming about the future and all the things we want to do when we are living life aboard.  So many things! And with those visions, getting back to work is a little easier.