We've really gotten back into the swing of things this week and momentum is building fast. Working on the boat is actually getting pretty fun this time around.  It's the beginning of the end, and it feels great to see it come together so much more at the end of each day.  It also helps that the work from here on out is pretty clear cut.  No more breaking into things and finding new problems that create extra work.  Our goal is to be move in ready, (no more work creating dust or fumes inside the cabin) by the end of the week.  And we're really close.

The ceilings are finished.  AJ and Phil scraped off the old paint when they were here in early December.  The first thing we did when we got back was fair, sand, and paint the ceilings.  It's such a relief to have this done! 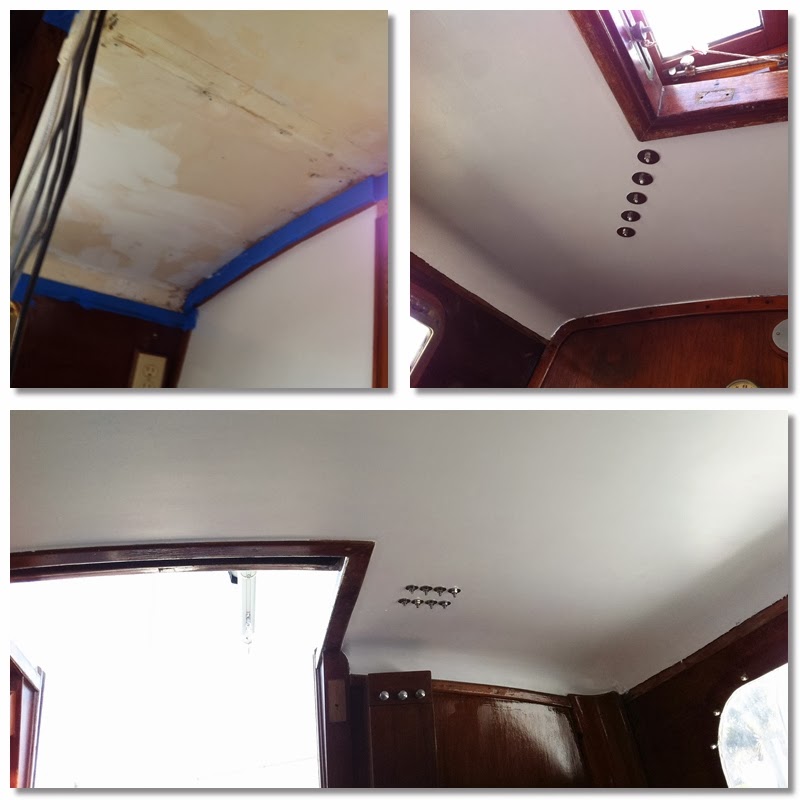 I also finished the half bulkheads.  They used to be covered in veneer.  But over the course of the last 3 years it peeled off. Instead of gluing up new veneer I painted.  The loss of the warm wood feel was a consideration, but ultimately we already had paint, and didn't have veneer. And the cabin is so heavily wood-ed already that I don't think it's too much of a loss. They will be mostly obscured by wood cabinets a table and cushions anyway.  I think the added brightness will be nice, and make fumbling around in the dark easier. I smoothed and filled the plywood grain with a thin layer of thickened epoxy, sanded, filled and smoothed with a plastic faring compound, sanded, primed, and painted. 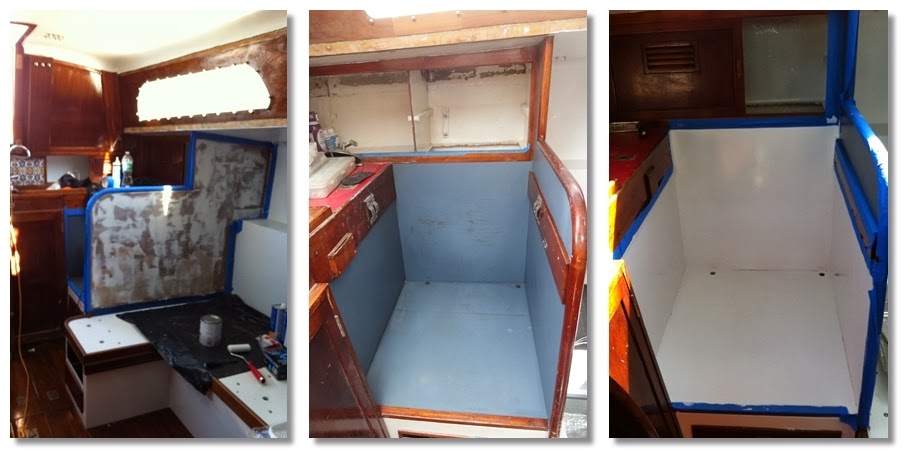 AJ hates the blue Formica in the galley stove well, just as much as he hated the blue Formica counter in the head that he replaced with white.  If it were entirely up to him though, he would pull out all the Formica, red galley counters and all, and redo them with the same wood he'll use to build the new counter over the well where the old icebox was to starboard.  But I'm trying to hold back this wave of renovation for now.  I think renovating the galley is good project for the next big haul out after we've been sailing a while. I don't want any more surprises. I want to move onto the boat yesterday. So for now we're just going to focus on getting rid of the blue. Formica isn't suppose to take paint very well but we read up on it and decided to give it a try. We sanded it, and are hoping that Pettit EZ Poxy topsides paint, with the EZ Prime (high build primer) will hold up.  It's hard, glossy and reflective.  The bulkheads, old icebox well area, baseboards, and galley cabinets were also painted with the EZ Poxy and EZ Prime.  It's so hard and wipe-able I love it. So far so good. The white stove well does brighten up the galley!  The great blue extraction is complete. 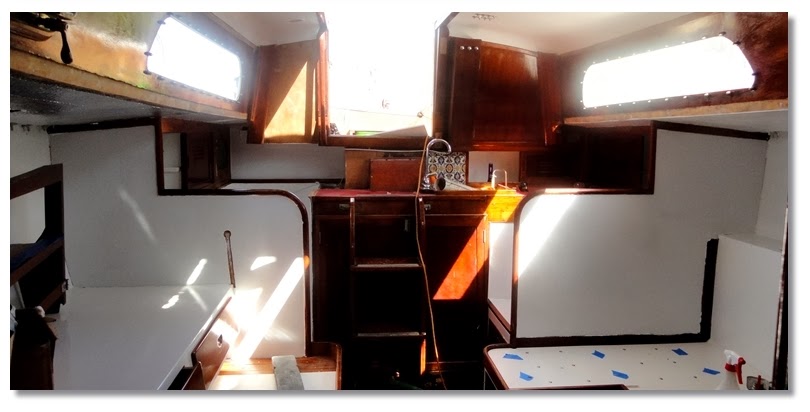 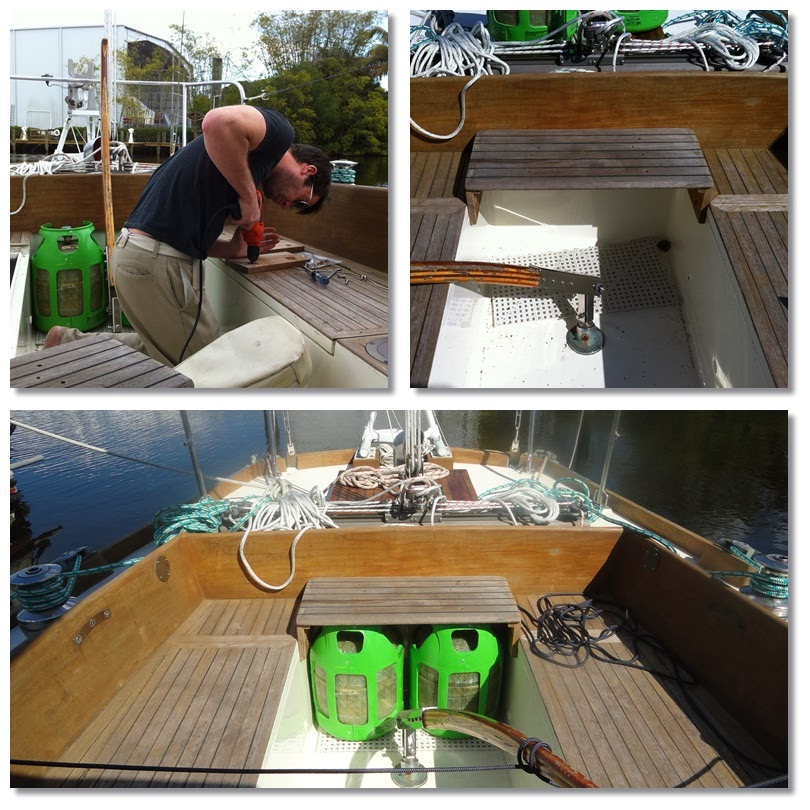 The propane will be tied in place, and canvas will hang in front of it.  The stove is clean, de-greased and ready to be dropped into the galley and plumbed.

AJ also installed the toilet, which amounts to hours of cussing and wrestling hoses and hose clamps. And obtaining many blisters and cuts.  I do not envy having the muscle for this job.  Stretching a 1 1/2" hose onto a barbed fitting is a legitimate Promethean curse.

The first pic is of the original head. With it's blue counter and green floor, and flush pump handle that blocked the door accessing under-the-counter plumbing.  We installed a drain in the floor before bolting down the board and toilet.  AJ was able to use the green hose from the old installation rearranged with an additional elbow, and only replace one hose on the outside fittings. We now have a fully functioning flushing head that doesn't block the below-counter door. 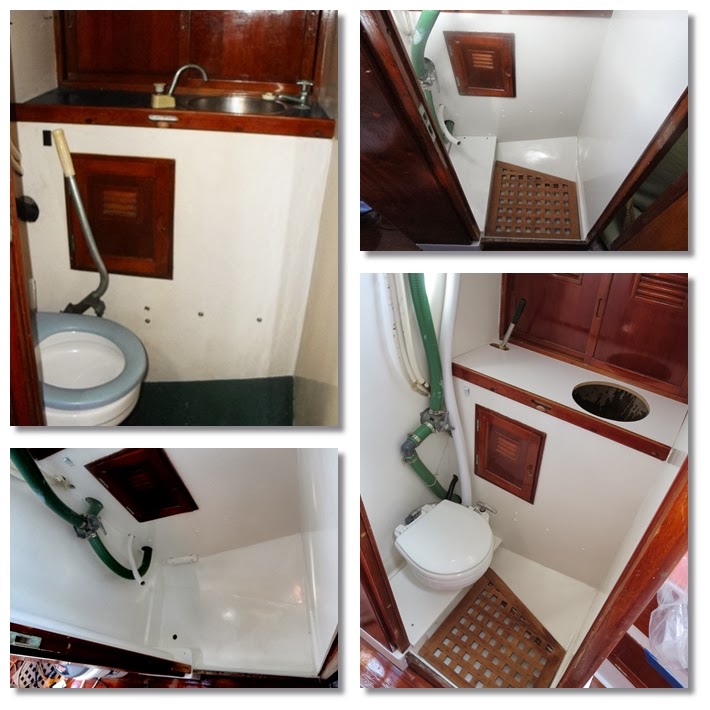 When AJ sailed with his dad in December, the prop had little thrust.  The engine wouldn't rev above 2000 rpm.  The most likely culprit is barnacles, but AJ just had to know for sure, mainly he wanted to make sure that we didn't oversize the prop on the boat. So he dove into black sugar plantation farm runoff water in 64 degree weather to find out.  The problem is in fact barnacles. So we'll have to call a diver or jump in again to clean it before another day sail.  I think maybe he should invest in a cheap wet-suit. 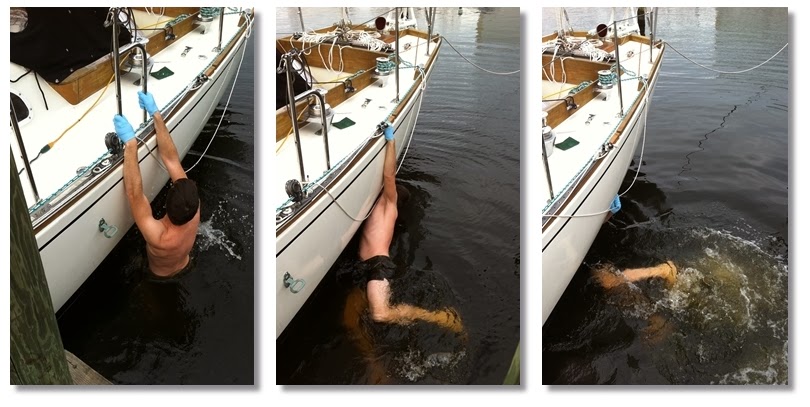 In other news, we got rear-ended this week.  The left tail light area on the truck is completely crushed.  We got a quote and it will cost more to fix than the truck is worth. (It's a '97 beater work truck and not really worth any work put into it). So insurance will likely call it totaled. We'll find out from the adjuster soon.  But for now we're driving a somewhat illegal vehicle that is missing a tail light. But what can you do?  It may turn out to be a blessing in disguise, since we were going to sell the truck soon-ish anyway.  We may get more from insurance than selling it.  But not having a car for this final stretch is kind of a problem...If we were living on the boat we could make due without a car reasonably well.  The boat is docked on the edge of the industrial district and near grocery stores and the like.  We could access everything by bike.  All the more reason to be move-in ready by the end of the week!  Once we are living aboard the transformation into home should happen fast.  I can't wait to be solving problems like how high to mount a shelf to best suit towel storage. We do still have the water tanks and wiring to be concerned with. So I'm getting a little ahead of myself, but as I said before I think it will come together fast when we are living aboard.  I can't wait.  We're about to get our lives back... And the weather is fantastic.