Surfing a Storm Front to Nassau

A storm front was approaching, so we only had one day on Bird Cay.  We had to finish exploring the abandoned mansion and dinghy back to Robin in time to pull up the anchor and make the jump across the bay into the leeshore of Frazer's Hog Cay before night fell.  The sun set as we were entering the anchorage, and we found our spot of anchor-friendly sand by flashlight.  We waited a day and two nights in that anchorage as the wind slowly clocked from E to SE, through S and W eventually ending up NW.  Happily, Frazer's Hog Cay anchorage is protected and calm from all directions, and SV Pura Vida was there again rallying the eleven other boats in the anchorage on the radio.   That night they assured us that the wind would remain from the NW the next day as the front rolled through.  That would mean a predictable downwind run to Nassau, something that doesn't often happen.

Strong tidal currents surge back and forth from the deep Northwest Bahamas Passage ("the tongue of the ocean") and the shallow Bahamas banks every six hours, so I figured we would try to leave on an outward surge off of the Berry banks headed towards Nassau, hit low tide in the middle of the deep and catch the incoming surge into Nassau for the second half.  35+ knot winds and waves building to ten feet were predicted for the day.  I was hoping entering and exiting in a tidal surge moving the same direction as the wind would keep the waves down.  Surely my rough guess at favorable tidal currents would keep seas down to easy four foot rollers...

Odd wave patterns converging from the two stretches of deep water behind us.


I didn't think that Robin's gloriously curved eight-ton fiberglass and lead underbody could surf, however GPS speedometer regularly surged more than three knots over base speed as the waves passed underneath.  We even hit 10.2 knots on some surfs. (though the overall readings could be influenced by tidal currents).  We started the day with a double reef in the mainsail, but were fully reefed shortly into the route.  Our tiniest triangles of sail were both pinned in place by 40 knot winds, and Robin plowed a massive trough in the ocean.  Bottomline, our 38 mile trip, anchor up to anchor down, took exactly 5 hours, giving an average speed of 7.6 knots ... in a classic full keel sailboat with a 25 foot waterline.  #micdrop  #mindsblown

Eventually Sarah had to help me on the tiller during the hardest moments of windward helm.  It proved too much for Alfred (the self-steering windvane), and I was exhausted after nearly five hours of holding course and could barely handle it myself.

We were happy to see land, even if it did mean the waves got steeper.  We surfed one last time past the lighthouse and breakwaters into Nassau Harbor entrance.  The waves immediately died down to a heavy chop and we finally struck sails as we made our way past the cruise ship docks to the anchorage.  There are even more videos of the passage on our YouTube channel if you didn't get your fix of POV sailing at casual bicycle speeds. 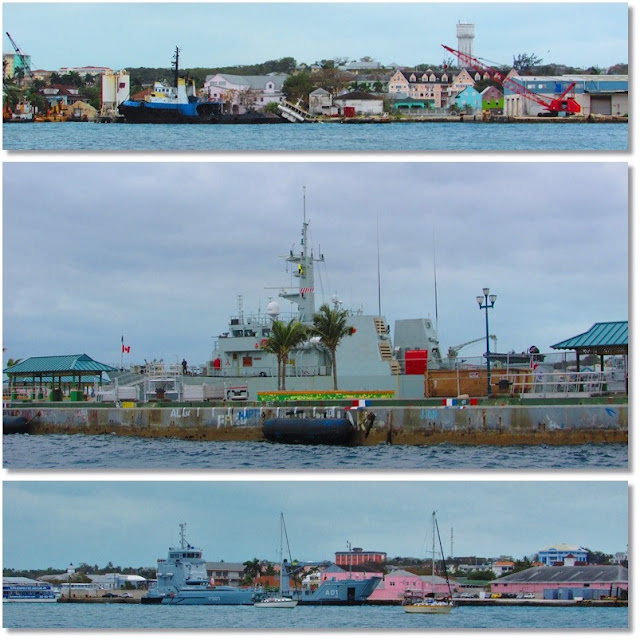 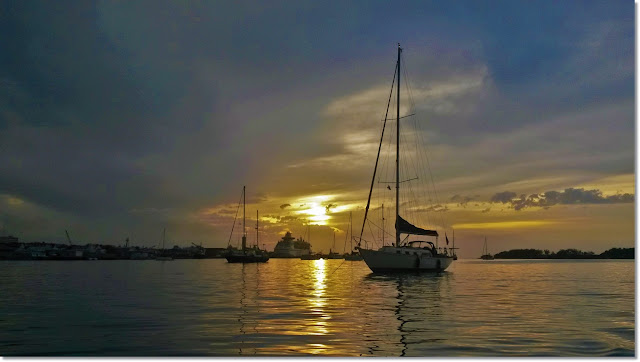 The anchor was barely in the ground before we prepped the dinghy and headed to shore to toast being alive and upright.  It took three drinks to calm down and a fourth to toast Robin's bad-ass-ery on a record setting passage.
Posted by Andrew Lea at 4:02 PM