AJ here this time. We've installed the two fixed cabin windows.  The original windows were heavy laminated glass with a split in the middle.  They were set inside the cutout, and sandwiched in place between wood trim inside and out, screwed in with the tiniest screws I've seen.  Seriously, they were wood threaded versions of laptop case screws.

This time we are making the windows out of 3/8" acrylic, and oversizing them 1" all around, so we have a lip to through-bolt them to the cabin.  The fastening is much stronger, and the resulting glazed area is about 1/2" bigger all around.

We decided to reuse the screw holes from the old inside trim, so we plugged the outer trim screw holes with a bit of wood colored epoxy from the inside and figured the caulk would make up the difference on the outside.  I made a cardboard drilling template for four of the corner screws and the cutout hole and centered it on the new window.  Problem one arose when I realized that I wouldn't be able to line up the cutout line on the template without being able to see through the glass.  The acrylic comes with both sides covered with a protective opaque film that I wanted to leave on through the process to prevent scratching the window.  Careful hands and masking tape would have to be the solution.  If we were drilling a fresh bolting pattern into the window and boat, then we could have used the films as the caulk masking with careful trimming.
The four holes and the 1" overlap lined up perfectly and allowed me to screw the window on to match and drill all the other holes.  All the screws are countersunk so we can finish this on the outside with a teak trim ring.  I only drilled the fiberglass cabin roof holes big enough to provide a threaded fit for the machine screws.  Acorn nuts will be on the inside. 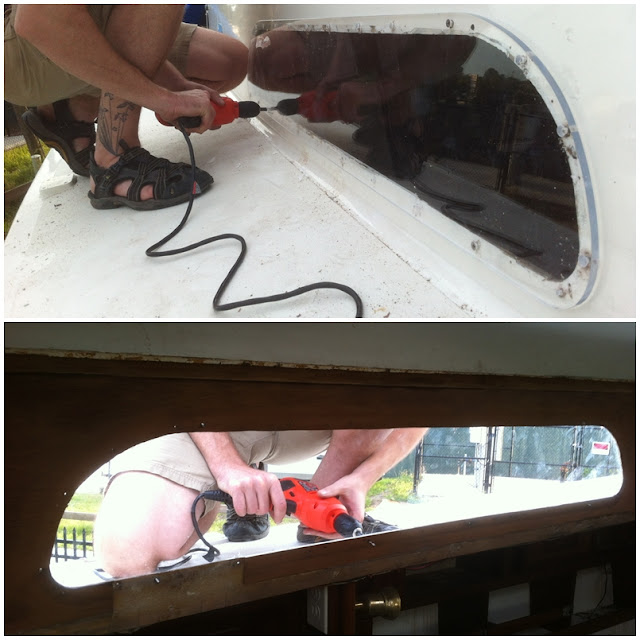 Then every surface that the overflowing caulk can get on is taped to allow clean(ish) lines when the final fillet is made. 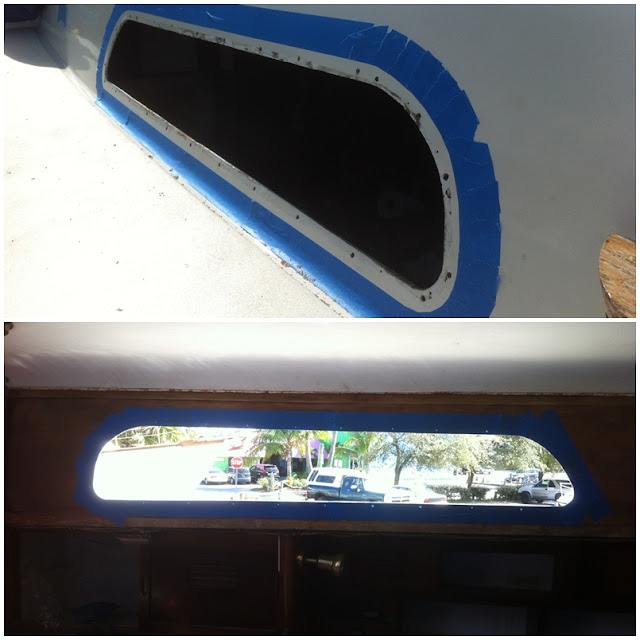 Apparently fixing windows in this way can cause the caulk seal to break after years of different expansion/contraction sizes and rates between the acrylic window and the fiberglass (or wood, or steel, or aluminum) boat.  This is my little addition: neoprene washers.  My (hopeful) fix is to put neoprene washers on every screw to create a tiny gap for the caulk to fill, allowing a more flexible final seal.  The upshot of this is that all the screws are already held stiff in place and they all lined up with their holes perfectly when the final affixing was done, allowing the window to be easily and consistently squished into place without wandering. 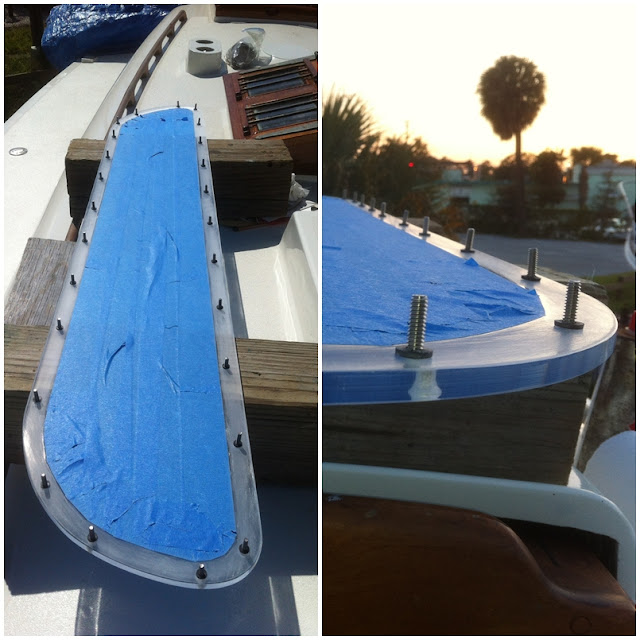 This may look like excess (and it is) but I wanted to make sure that the gap got filled.  We actually didn't put down too much more than it needed in the end.  The product we used was 3M 4000 UV.  Not nearly 5200, and not quite 4200.  This promises a more flexible seal and the best UV resistance and for deck hardware and windows, and it won't rip your boat apart when it comes time to remove the stuff. 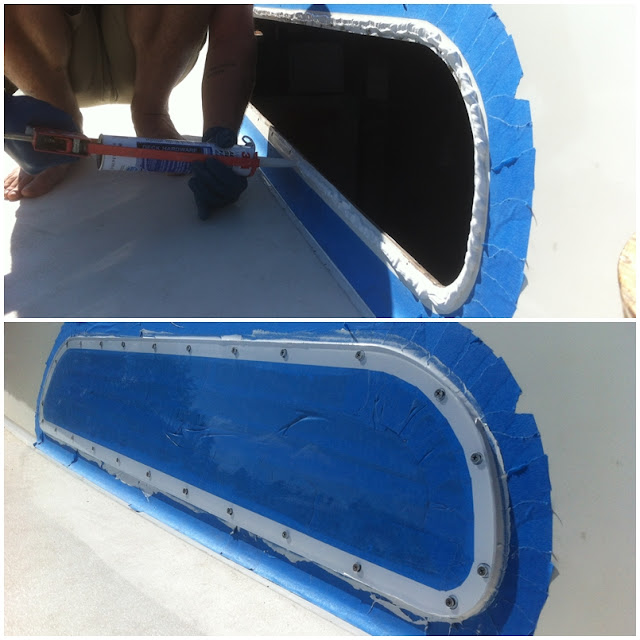 For this vertical project, I was appreciative how stiff it is.  It didn't run like 5200 does, and it wasn't quite as gooey/sticky either, so clean up was much easier.  But my forearms were so pumped from pumping that damn pump that pumping the last few pumps was near impossible.

The neoprene washers proved useful as a gap gauge.  You could observe their expanding diameter when compressed and estimate an equal caulk seam thickness at each screw, plus they bedded in very well with no air pockets that I could see.  We will pull and bed each screw in caulk individually after it cures. Another good part about a 1/16-1/32" caulk seam, is that we can clamp it just a bit tighter when we re-install each screw to (hopefully) prevent any peel effect with eventual shrinkage.

After clean up.  Yeah, there are some wandering lines where we didn't quite get the caulk seam right, and had to try and clean it up after the tape pulled off, but it came out pretty nice. (and the trim should cover the rest) 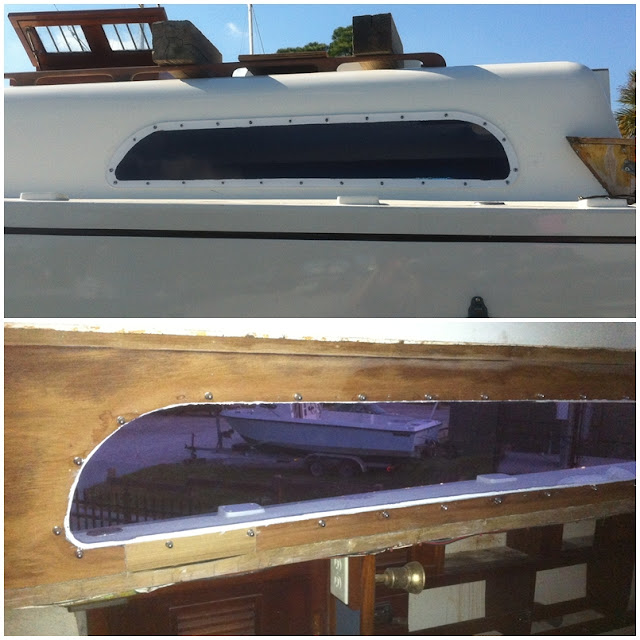 Acorn nuts on the inside is our current level of finish.  We are considering a stainless trim ring, both to reinforce the area and to prevent waviness between screws when we re-tighten them with caulk bedding.  It will also allow us to remove the three-washers-per screw needed to allow the acorn nuts without having to grind the tip of each one.  Don't worry about the water marks around the screws I tell myself, they were just put there with the last cleaning before install.  A touch of sanding  and some varnish and everything will look perfect-ish.

You can see a a small patch I made to the inside teak fascia before the install.  I hope it will varnish up to a similar color, but with 20 years of age, and likely the Pacific ocean and South China Sea between the two trees, I'm not sure it will.  Maybe it'll age fast being right over the stove.  Or maybe the inside fascia is some random south east Asian hardwood.  We may never know.