Crossing the Gulf Stream to the Bahamas

After a couple weeks in Marathon we were itching to go sailing. Marinas aren't what boats are built for. But crossing the Gulf Stream depends on weather, so you wait whether you like it or not. Favorable wind and waves were not predicted for the following week, however there was a two day window of reasonably calm seas and no wind. So we decided to make a run for the Bahamas, and motor across the stream if we had to.  March 3rd we weighed anchor in Marathon and motored in flat seas and dead air towards Islamorada, a more northern Key from which to stage our stream crossing.

Hauling up and scraping the dinghy. 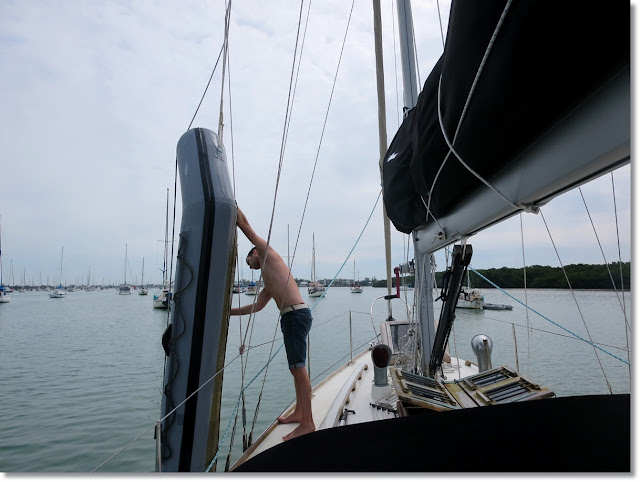 Channel marker with 7 mile bridge in the distance. 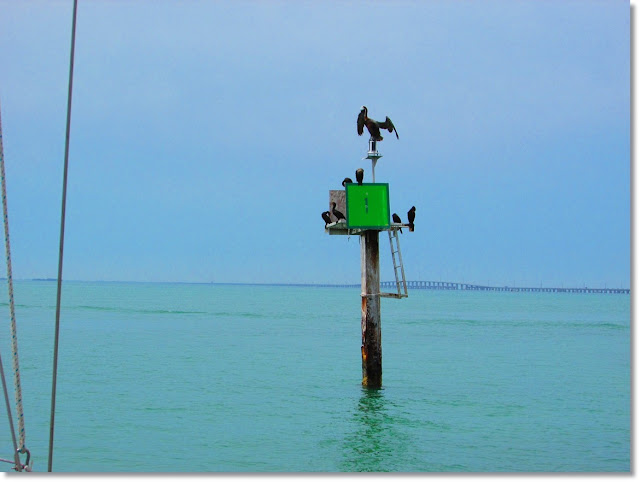 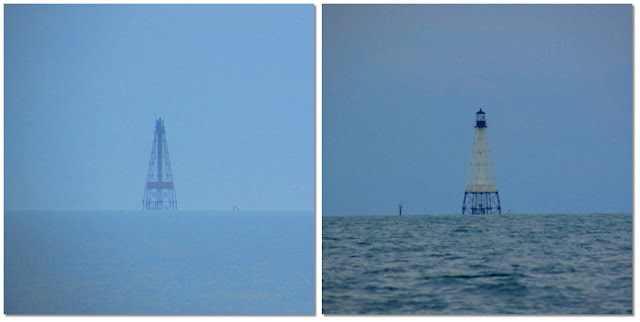 We motored for a couple hours before the wind kicked up just enough to raise sail. Once under sail I took the tiller for a couple hours and navigated through fields of crab pots, which I rather enjoyed. Staying on course is a bit more fun with obstacles to avoid.

We made it to Islamorada just as the sun was setting, dropped anchor gulf side, and rolled and pitched all night long. Mostly rolled.  I don't think I slept a wink, but mostly because of the anticipation of getting up at 3am to begin our crossing in the dark. I don't tend to sleep on nights preceding days important enough to set an alarm for.  At least the adrenaline was enough to override any weariness. Even AJ woke up an hour before the alarm. We weighed anchor at 4am, and the anchor line was covered in blue bio-luminescent creatures that glittered like Christmas lights as AJ pulled it up.  It was a waning moon and a cloudy sky. Not a single star to give us a glimmer of light. I sat on the cabin roof shinning a flood light onto the water to watch for crab traps while AJ steered. We were just entering the stream, watching the depth drop from 30, to 50, to 130, to ---- when day broke. 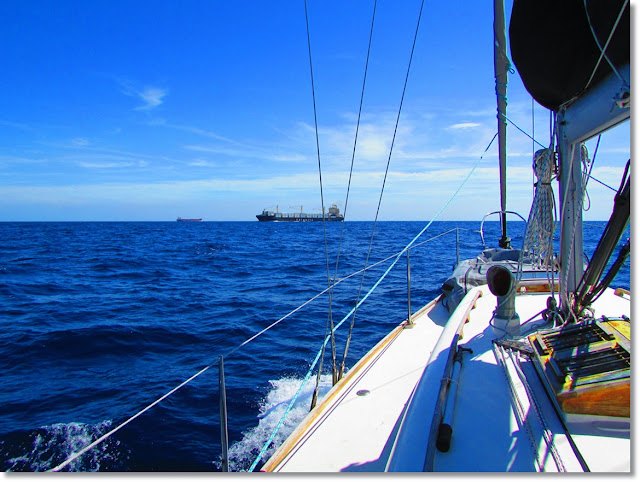 As we motored through the stream, the boat rolled hard.  The movement of sailing is so much nicer than motoring. After all, our hull wasn't designed to motor, and it's really quite strenuous with a following sea. It's hard to hold a tiller steady or on course when the boat is rolling and you are doing all you can just to stay upright. Sails are stabilizing.

In the early afternoon a big ship appeared on the horizon. In a matter of minutes there were three, then five. This was my first time surrounded by water with no land in sight for orientation. What you see out there doesn't make any sense direction-ally. Watching the ships appear reminded me of Brian Eno's art installation during the "It's not just Rock 'n' Roll baby" exhibit at the BOZAR Museum in Brussels Belgium (c. 2008). A large pitch black room played host to light projections resembling stained glass windows that glowed on the walls. The patterns changed, but at a rate imperceptible to the eye. So even though you were starring at it, you never saw it change. You only eventually realized you were looking at a different picture than you were a few minutes ago. And that is exactly what big ships look like on the open sea. They don't appear to be moving at all; but eventually, they're bigger, or smaller, or angled differently. It's impossible to tell where they are going just by looking at them. Your instruments are your only clue. We successfully avoided 7 ships. 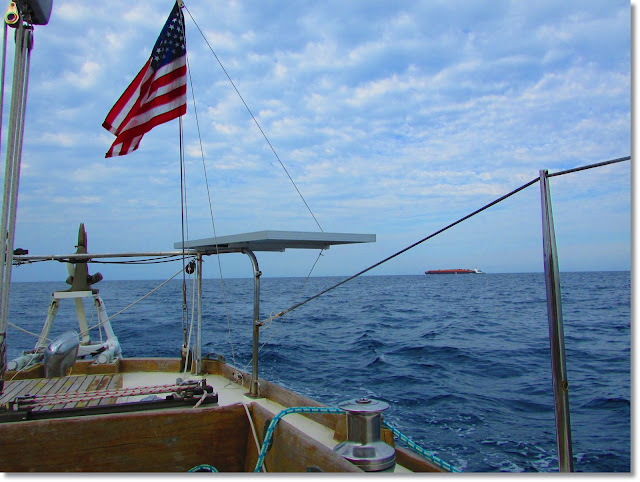 Around 2:30PM we saw land: The island of South Bimini. 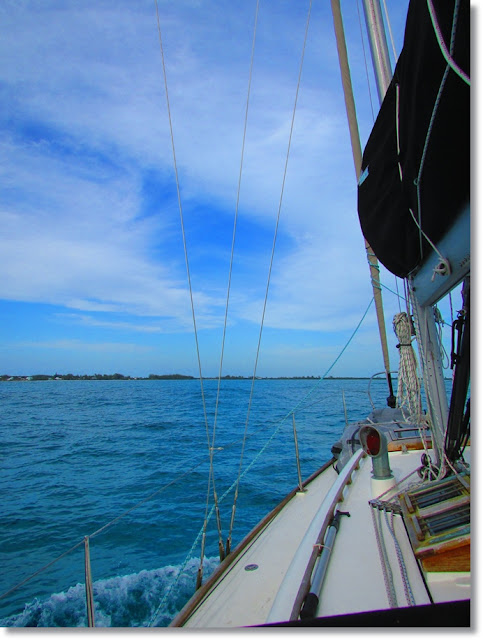 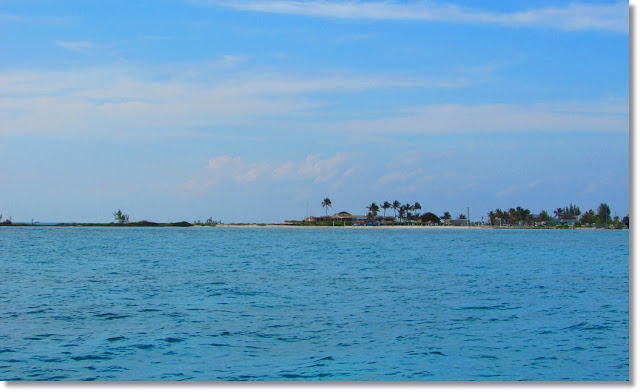 We dropped anchor in Nixon's Harbor at 4PM, exactly 12 hours after we hauled it in Islamorada that morning. 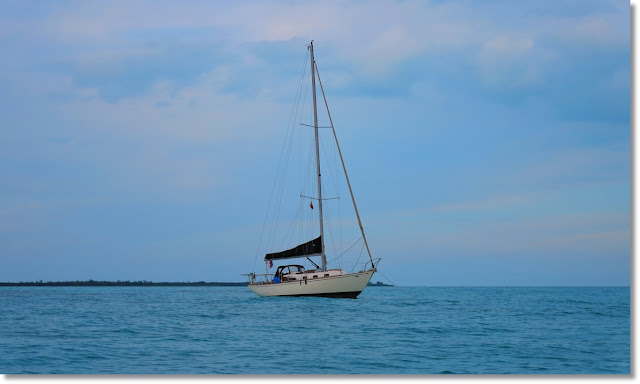